Accessibility links
Trump Impeachment: Texas Rep. Al Green To Push Articles For Fourth Time Green says he will bring his articles of impeachment to the House floor for a fourth time. More than 120 House Democrats now say they support an inquiry. 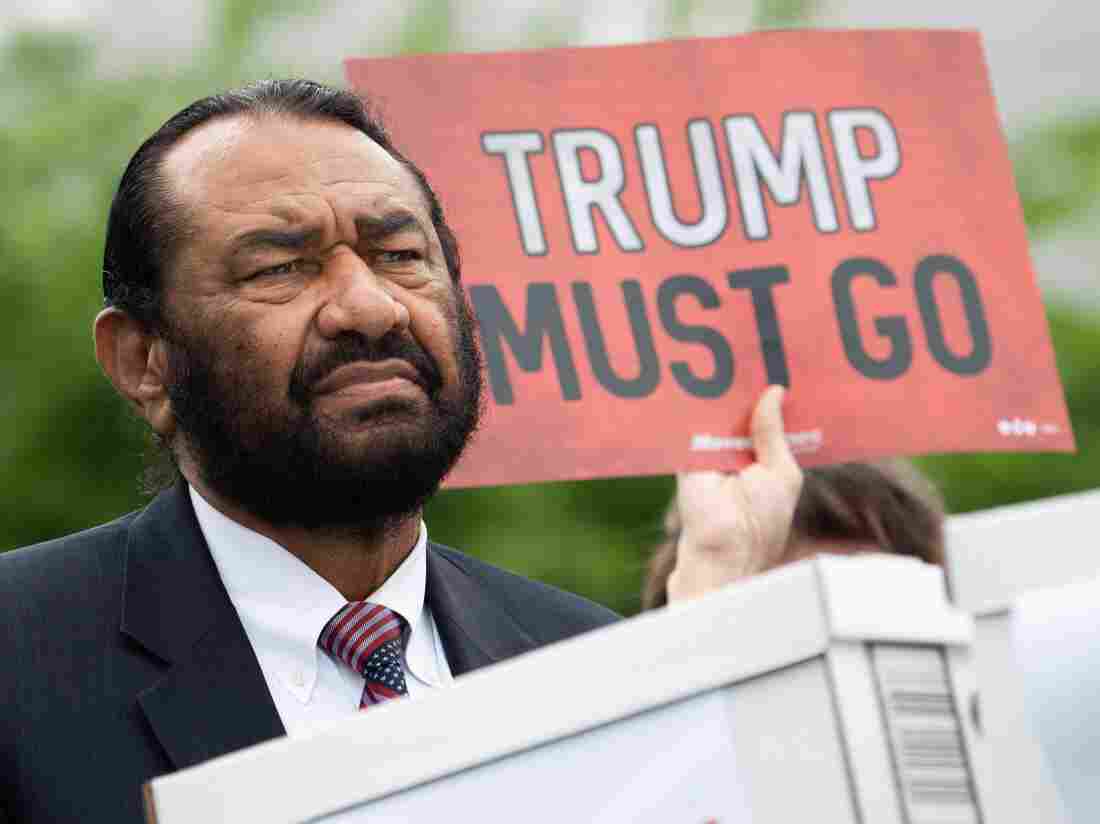 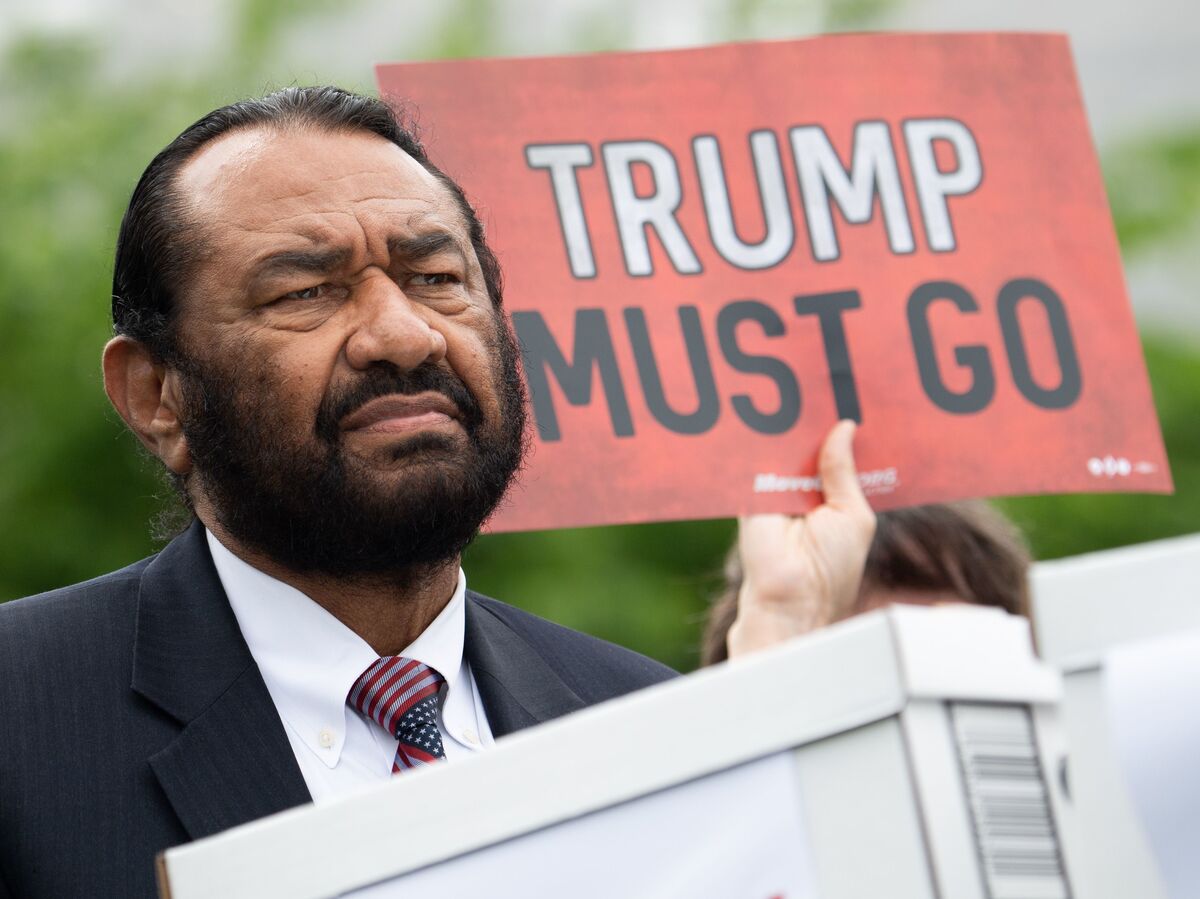 Rep. Al Green speaks during a news conference in May as activists urge Congress to begin impeachment proceedings against President Trump.

With a majority of House Democratic lawmakers now behind him, Rep. Al Green says he'll try for a fourth time to impeach President Trump after Congress returns next month.

Green first called for impeachment four months into Trump's presidency, in May 2017.

Now, more than 120 House Democrats have publicly said they support an impeachment inquiry, according to NPR's tracker.

"Things start with a spark, and sometimes the spark is ignored," Green said following a Houston forum with his constituents earlier this month. "Other times the spark can cause others to become consumed with the righteousness of a cause and participate in the cause itself."

The eight-term congressman has remained the lone lawmaker calling for Trump's impeachment from the House floor for more than two years. But during that time, he has been joined by a steady stream of Democrats as they took control of the chamber this year.

"This is not a position I've reached lightly," Lujan said in a statement Monday.

Green first made his impeachment call from a Republican-controlled chamber days after Trump fired his then-FBI director, James Comey, in May 2017.

The move came on the heels of concerns that Trump had obstructed a Department of Justice investigation into Russian ties to his 2016 presidential campaign.

At the time, only a handful of lawmakers were publicly supportive of impeachment, including California Democratic Reps. Brad Sherman and Maxine Waters. Green, who is African American, said he received several racist and threatening messages in response.

He said he has upped his security since those messages.

Since that first call, Green has called for impeachment on the House floor two more times. In the most recent attempt on July 17, the House voted 332 to 95 to stop the discussion.

Green says his impeachment case against Trump began in a law school class he attended at Texas Southern University in the early 1970s.

"And my guess is, if I hadn't gone to law school, I wouldn't have had that sense of how to remove a president from office," said Green, 71.

He has made it a central talking point, talking to voters from Michigan to Mississippi during a bit of an impeachment tour this summer. Although Green, a former judge and head of the Houston NAACP, is quick to say he also discusses "kitchen table issues," such as Social Security, health care and voting rights.

But "part of the kitchen table issues now is that of impeachment," Green said. "Wherever I go, I usually bring it up. ... It's just rather unusual for me not to bring it up because we truly want to deal with the issues that are impacting all of us — this has to be one of them."

"It's not the best thing ... politically"

But not everyone agrees that impeachment is the answer.

At a local forum for Green's 9th Congressional District, longtime acquaintance Riyad Abu-Taha says beating Trump in the 2020 presidential elections may be more beneficial. Green had ended the meeting on his case for impeachment.

"I think the best thing to do is really to find a good good candidate from the Democratic Party where you know they can beat [Trump] in 2020 and then you know then he can be tried for criminal acts," said Abu-Taha, who runs a Houston area media group.

Green has also faced off against Pelosi and other House Democratic leaders who want to take a more conservative approach. Recently, Rep. Jerry Nadler, the chairman of the House Judiciary Committee, said an impeachment inquiry was already underway.

However, Nadler has yet to issue a direct statement saying he is publicly in support, in line with Pelosi's directives to her party to be patient.

That has irritated Green, who says lawmakers need to be clear about their positions on impeachment and face the consequences either way.

In the end, Green knows he is taking significant political risks.

"I don't know how people will ultimately see this when they go to the polls to vote. Taking this position is no assurance that I'm going to get reelected," Green said. "So I'm just convinced that it's not the best thing to do politically for me, but it's the right thing to do. And when you do the right thing, in my opinion, the other things will take care of themselves."

Because of an error on Rep. Al Green's website, an earlier version of this story incorrectly stated that Green first filed articles of impeachment in January 2017. He actually did so in January 2018.