Accessibility links
Florida Could Serve As Example For Lawmakers Considering Red Flag Laws Florida adopted a red flag law last year after the shooting that killed 17 people at Marjory Stoneman Douglas High School. Since then, courts there have approved about 2,500 risk protection orders. 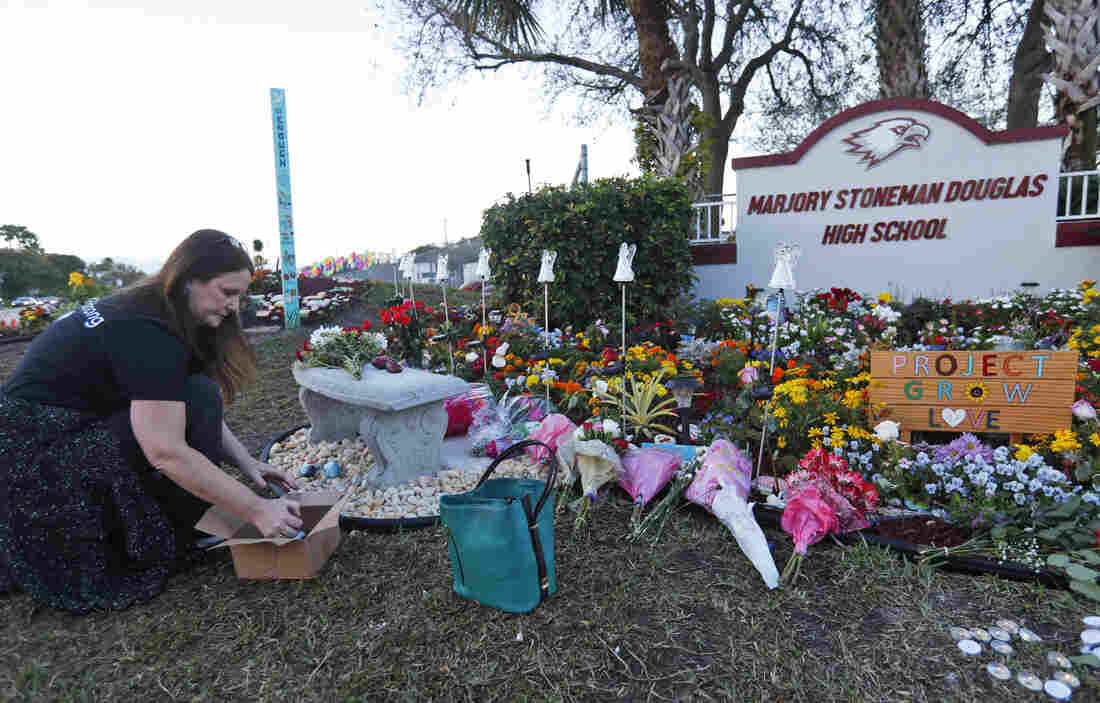 Suzanne Devine Clark, an art teacher at Deerfield Beach Elementary School, places painted stones at a memorial outside Marjory Stoneman Douglas High School during the first anniversary of the school shooting on Feb. 14, 2019, in Parkland, Fla. The state passed its red flag law in 2018 after the shootings at the high school. Wilfredo Lee/AP hide caption

Following the shootings in El Paso, Texas, and Dayton, Ohio, Congress is considering a bill that would encourage states to pass red flag laws. Members of Congress may want to study Florida, where it's been in place for a year and a half.

Since it was adopted there, courts have approved some 2,500 risk protection orders. That's nearly five every day, more than any other state. The Florida law allows police, acting with court approval, to temporarily seize weapons from people deemed to be at risk of harming themselves or others.

Bob Gualtieri, the sheriff in Pinellas County, Fla., which has issued more than 350 risk protection orders, believes the red flag law is something Florida has needed for a long time. Before, even if someone was found to be mentally ill, he says police couldn't take their guns. This law changes, and gives police a tool for dealing with people "that have said things, that have done things, exhibited behaviors that rise to the level of concern."

Once the order is in place, Gualtieri says, "They can't run out and buy guns, acquire guns. Because you're prohibited from possessing, from owning or purchasing under a risk protection order. So, it's a big deal."

One of the counties that's requested the most risk protection orders is Broward County, where a mass shooting at Marjory Stoneman Douglas High School last year left 17 people dead. In Broward, authorities often seek risk protection orders to block people who may not even own a gun in order to keep them from buying one.

Kristi MacKenzie, a lawyer with Broward's sheriff, said earlier in the day she had gotten a risk protection order for a man who was threatening his girlfriend.

Although his girlfriend didn't believe he had a gun, according to MacKenzie, the sheriff's department secured a risk protection order anyway.

"It leads me to believe [he] might go and purchase one if [he doesn't] already have it," she said.

Nearly every Thursday, in a Miami courtroom, a judge hears red flag cases.

On a recent Thursday, police officers told Judge Diana Vizcaino they responded in April to a 911 call about a man with a gun at a neighborhood park. When they arrived at the park, they found Bobby Wellons in his car, with a gun. Miami-Dade Police Sgt. Christopher Hernandez told Vizcaino he thinks Wellons made the call to 911, and that he did so for a disturbing reason.

"He stated that he hoped police would kill him by responding to the scene," Hernandez said. "That's why he called."

Wellons told the judge he got down sometimes but wasn't suicidal. The judge listened, but then told him she was approving a risk protection order.

"For these next 12 months," Vizcaino said, "you are not to own or possess any firearms or ammunitions." Wellons told her that he understood.

Jack Tuter, the chief judge in Broward County said, "A lot of this stuff is quite scary about what the defendant is charged with having done."

Tuter said when officers ask for a risk protection order to confiscate someone's firearms, judges rarely say no. While people can challenge the seizure of their weapons, many give them up willingly, knowing it's just for a year.

Tuter supports Florida's red flag law, but said it puts the courts in an unusual position. Judges are being asked to predict a person's behavior in the future.

"You're trying to determine is he going to harm himself or others and should he have a weapon or ammunition? And so it's a decision you're making based on future behavior, which isn't one we do a lot in the court system," Tuter said. 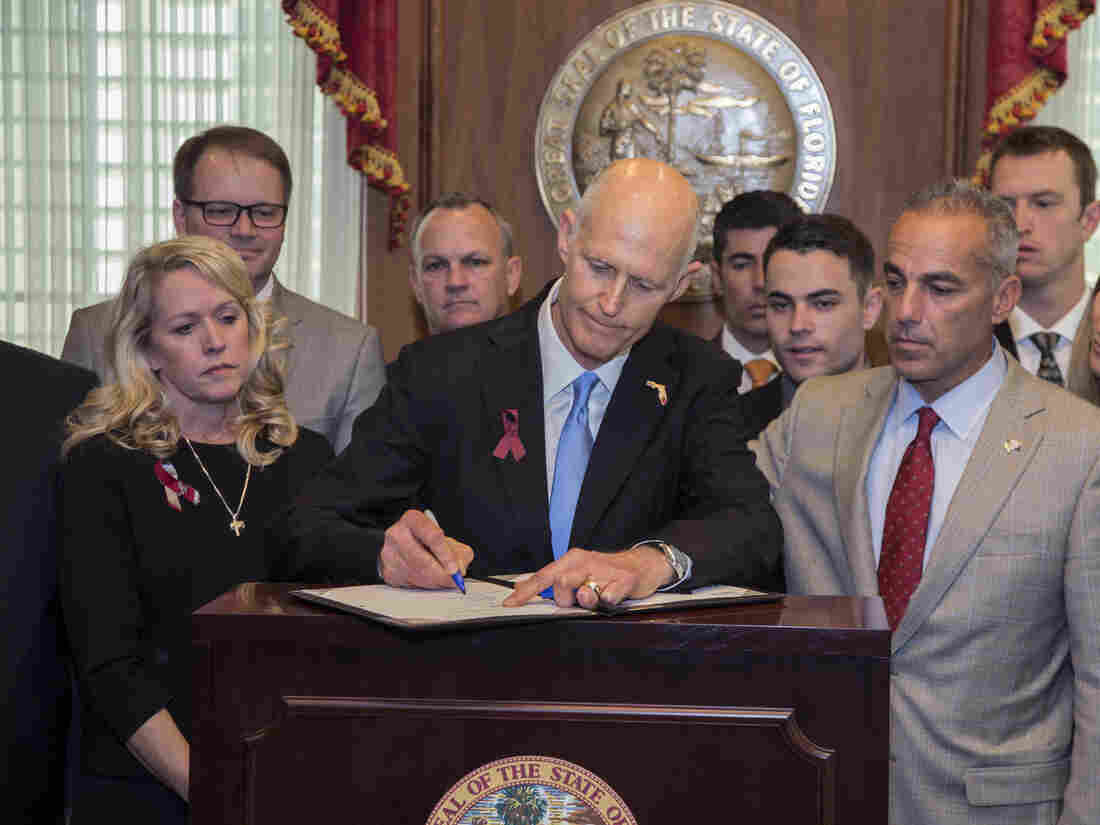 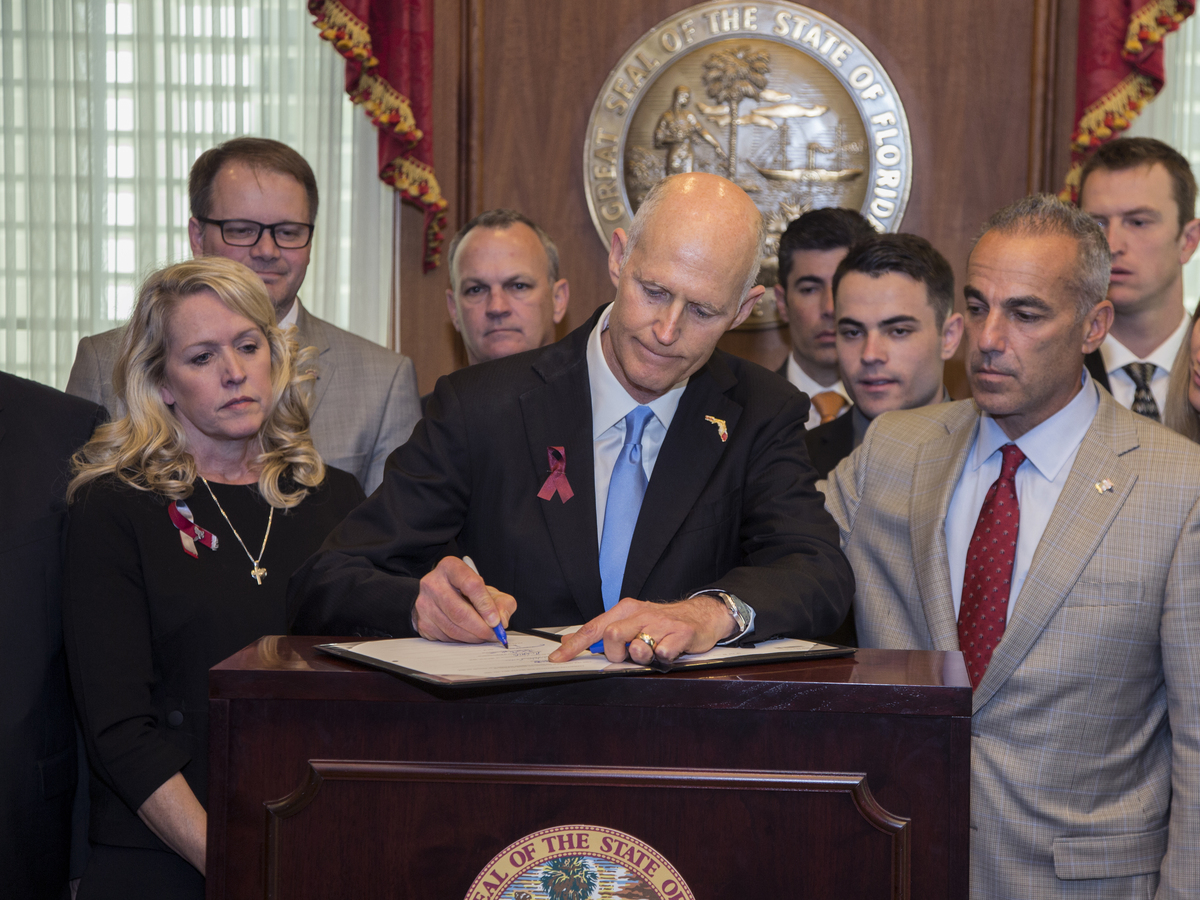 That's a troubling proposition, say defense attorneys. People are being held to account for something they haven't done yet. A risk protection order is reported to an FBI database used for background checks. That may make it harder to get into a school or find a job.

Kendra Parris has represented many clients who have fought against risk protection orders. "The court ... what they seem to be doing is, 'Out of an abundance of caution, we'll just go ahead and grant this risk protection order. What's the big deal? It's just the loss of firearms for a year,' " she said. But Parris says there can be long-lasting legal consequences for those who are subject to a risk protection order.

She has filed a case challenging the constitutionality of Florida's red flag statute, arguing that it's too vague and violates a person's right to due process. She also charges that the law is applied in an arbitrary manner, varying widely from county to county. The reasons for that vary. But politics doesn't seem to be a factor.

The largest number of risk protection orders, more than 380, have been issued in Polk County, an area with no major cities and a population of some 700,000. Perhaps surprisingly, Polk County Sheriff Grady Judd is an outspoken supporter of gun rights.

"Yeah I'm a huge second amendment person," Judd said. "I certainly believe those that are not mentally ill and have not had a felony conviction have the right to possess firearms."

The NRA hasn't actively opposed the red flag law here. Judd, a card-carrying member says the law requires a person to surrender their firearms to police or to a family member who agrees to keep them in a secure location. But it's only temporary. For Judd, that's an important distinction.

"The risk protection order does not allow the government to seize your firearms," he said. "It's more or less a cooling off period."

Elected officials, both Republicans and Democrats, support Florida's red flag law. When the legislature returns in the fall, members will consider expanding it to allow family members, not just police, seek risk protection orders for relatives they believe pose danger to themselves or others.

In the audio of this story, as in a previous Web version, we incorrectly say many of Kendra Parris' clients have usually been unsuccessful in their bids to avoid risk protection orders. In fact, Parris says 70% of her clients who have fought such orders have successfully defeated them.