Accessibility links
New Russian Opposition Leader, Lyubov Sobol, Says 'Government Is Very Afraid' Lyubov Sobol's tenacity in standing up to the authorities, combined with a savvy use of social media, has put her at the center of attention as a new protest leader. 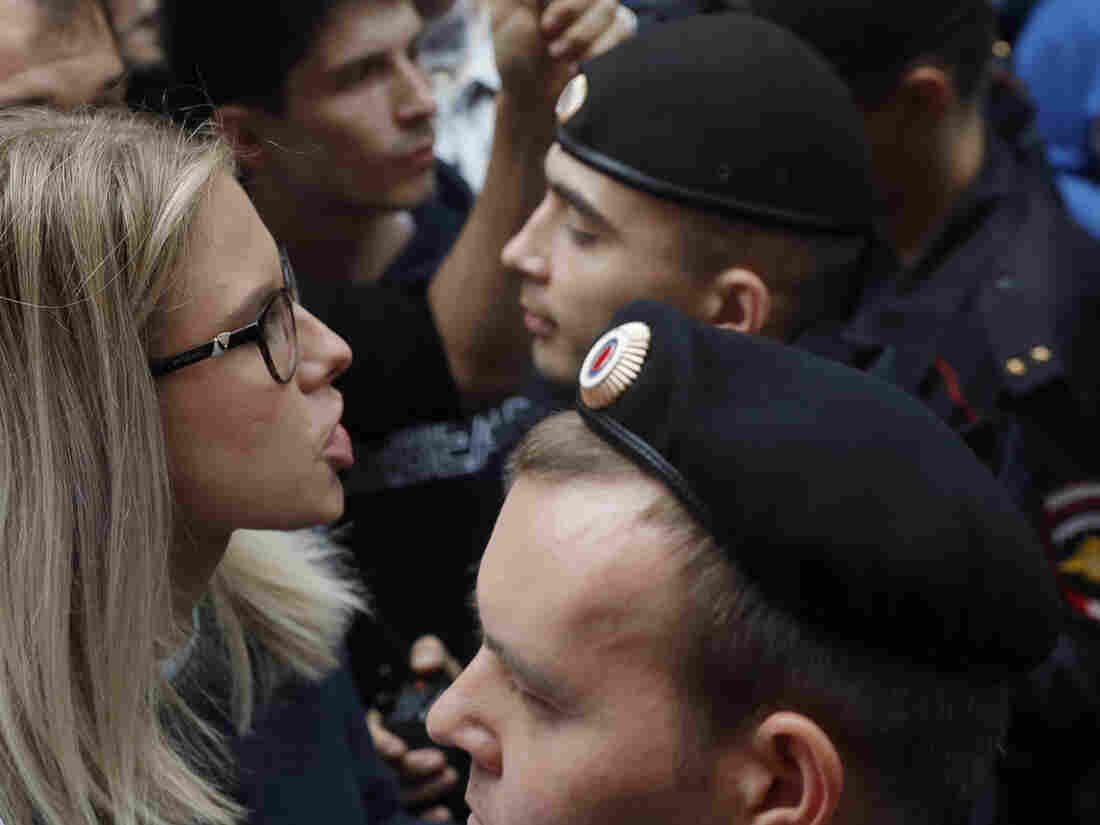 Russian opposition candidate and lawyer Lyubov Sobol stands in front of police during a demonstration in Moscow on July 14. This summer's wave of opposition protests has pushed Sobol to the forefront of the Russian political scene. Pavel Golovkin/AP hide caption 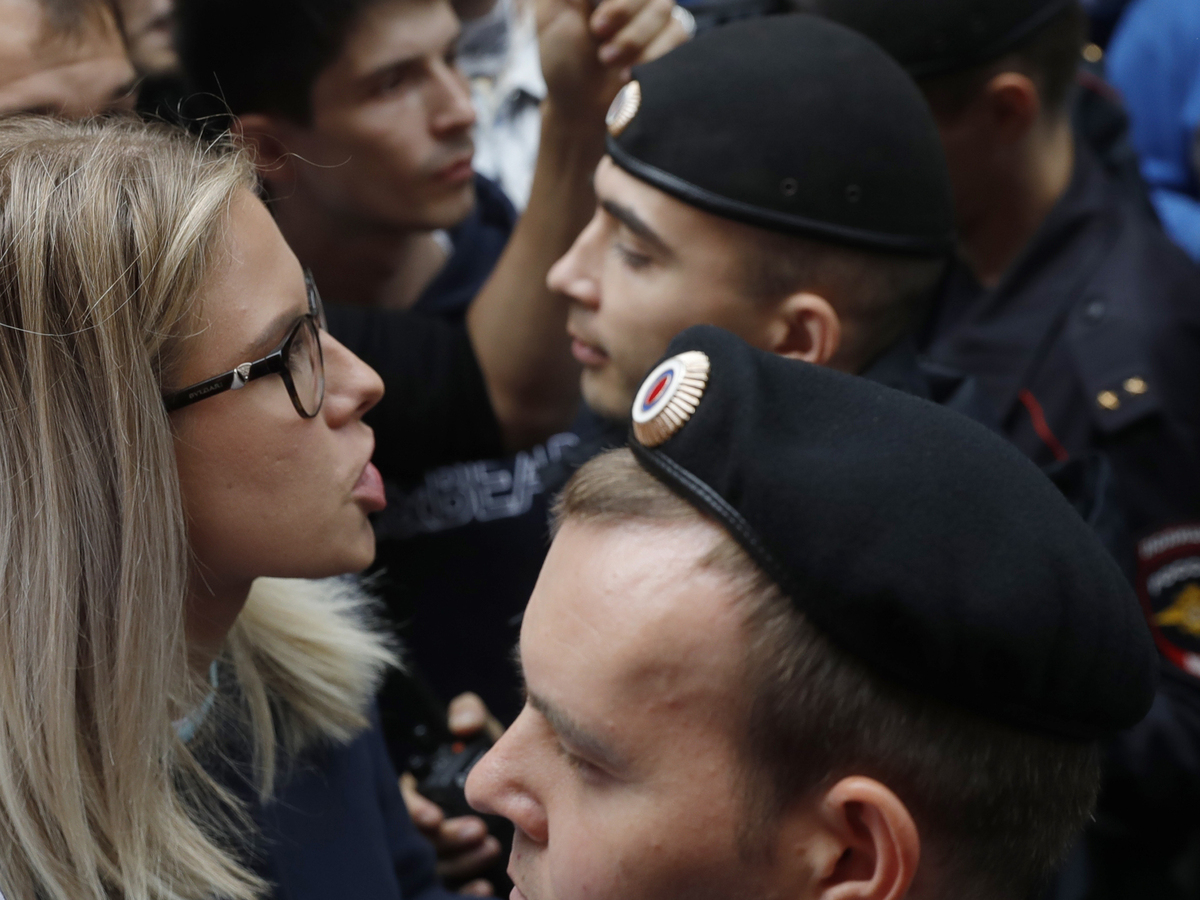 Russian opposition candidate and lawyer Lyubov Sobol stands in front of police during a demonstration in Moscow on July 14. This summer's wave of opposition protests has pushed Sobol to the forefront of the Russian political scene.

Lyubov Sobol looks frail after ending a monthlong hunger strike. The unexpected protagonist of equally unexpected anti-government demonstrations in the Russian capital this summer, she speaks softly and chooses her words deliberately.

This spring, the 31-year-old lawyer, a longtime ally of opposition politician Alexei Navalny, decided to run for Moscow's city council. When the city's election commission barred her and other opposition candidates from the Sept. 8 ballot, Sobol declared a hunger strike and called on supporters to take to the street.

Her tenacity in standing up to the authorities, combined with the savvy use of social media, has put her at the center of attention as a new protest leader. In July, as guards carried her out of Moscow's election commission on the couch on which she was staging a sit-in, Sobol documented the surreal scene on her smartphone with a running commentary. 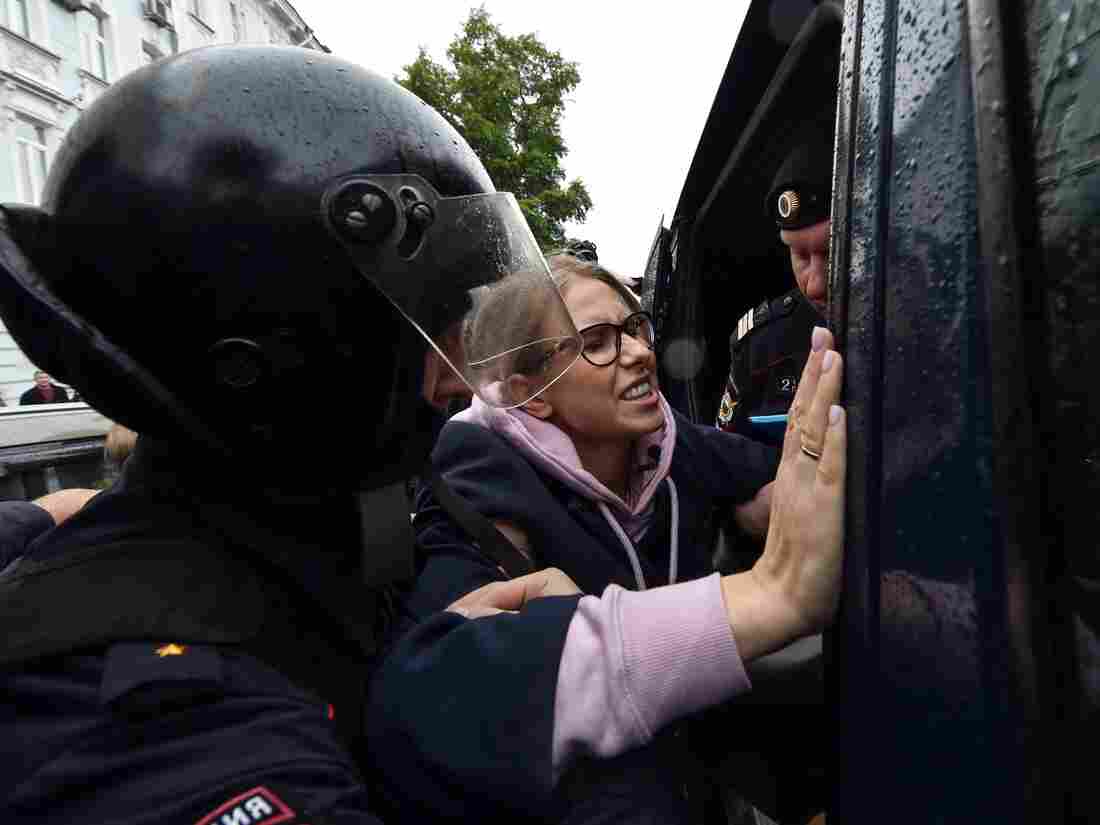 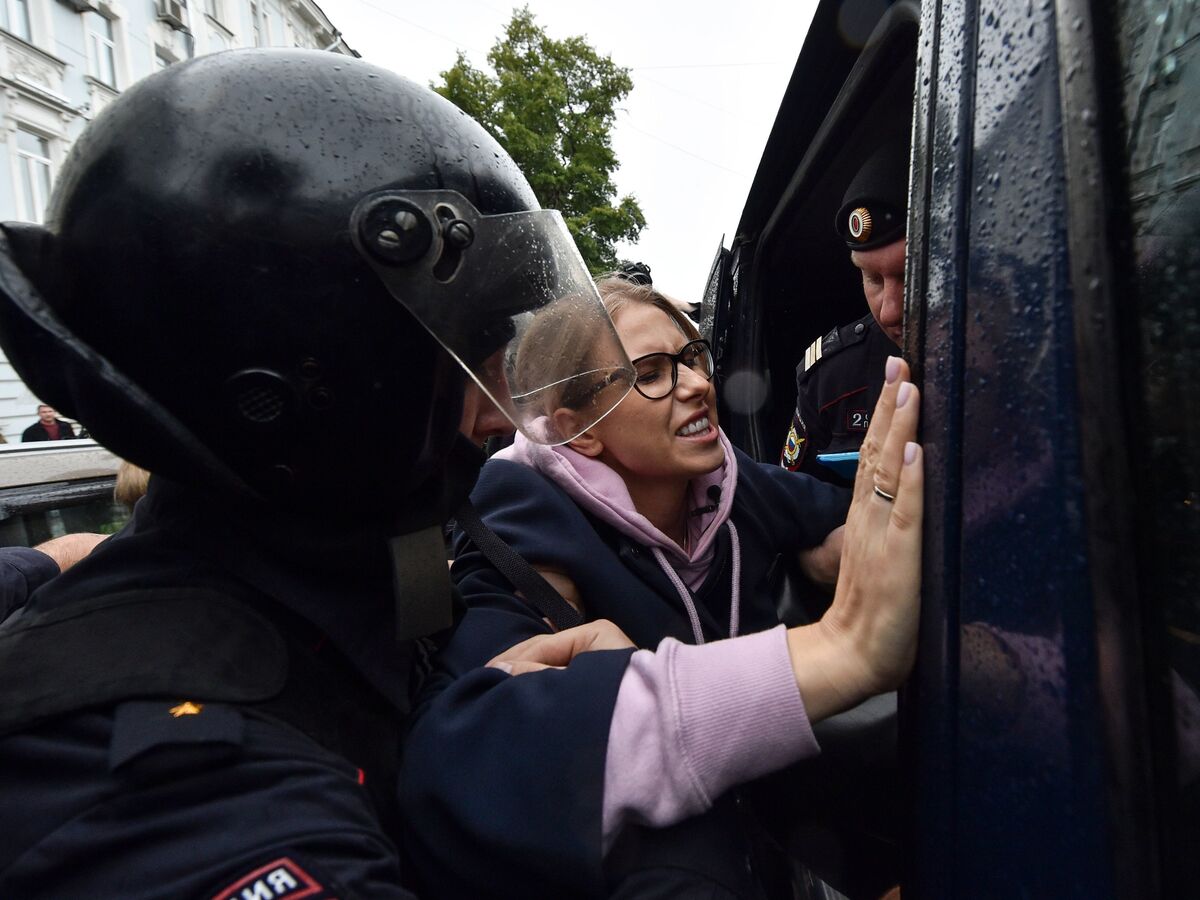 "People admire her for her strength of character and the fact that she's a woman in a very male-centered culture," says Sergey Radchenko, a professor at Cardiff University in Wales who is writing a book on Russia's opposition. "She's seen as someone suffering and being persecuted for the cause."

Moscow's rallies for free and fair elections are the largest anti-government demonstrations in years, bringing out more than 50,000 participants at the last rally on Aug. 10. After Vladimir Putin returned to the presidency for an unprecedented third term in 2012, he cracked down on dissent and saw a surge in popularity after he seized Crimea from Ukraine two years later. Putin has now been in power for 20 years.

Yet with the economy stagnating, polls show trust in Putin falling to levels before Crimea's annexation. While the Moscow protests hardly pose an existential threat to Putin, the heavy-handed police response and jailing of opposition leaders, including Navalny, demonstrate the Kremlin's hypersensitivity to any political activity beyond its control.

Even the opposition calls Moscow's City Duma a largely powerless assembly with a decorative, rather than representative, function. Yet by getting a toehold in the 45-member city council, independent candidates such as Sobol planned to challenge Mayor Sergei Sobyanin, a staunch Putin ally, and investigate allegations of widespread corruption. An electoral win in Russia's most populous city would also have lent the opposition legitimacy as a serious political force.

"The government is very afraid that the myth they spread via state propaganda will be destroyed — namely that only 2% of the population supports the democratic opposition and that we have no constructive political platform and just like protesting," says Sobol, speaking in the bare Moscow studios of Navalny's YouTube channel, Navalny Live, which were raided by law enforcement officers in July.

"If they had allowed independent democratic candidates to run, it would have meant our victory, since the majority of Muscovites do not support the ruling party," she says.

That party, United Russia, is so unpopular that both Putin and Sobyanin abandoned it and ran for reelection last year as independents. In Moscow, all of United Russia's candidates for the City Duma are registered without a party affiliation. 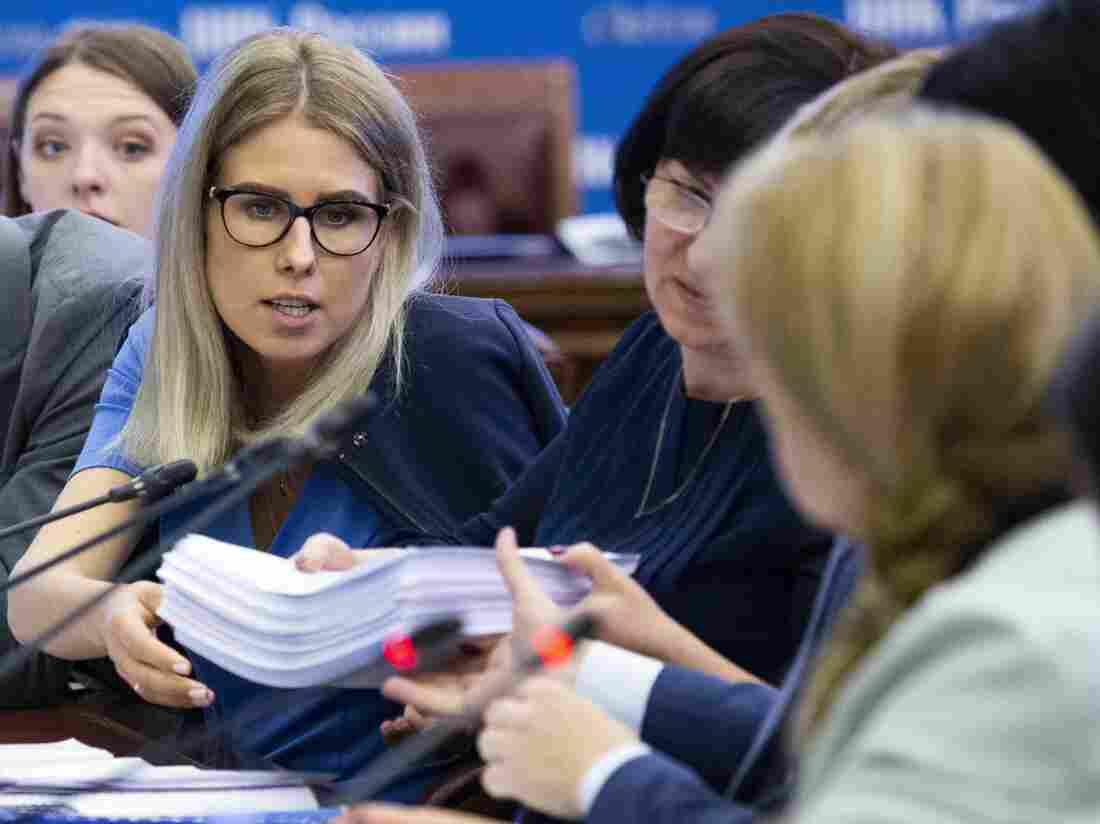 Sobol (left) gives election documents to Ella Pamfilova, head of the Russian Central Election Commission (right, back facing camera), during a meeting with opposition candidates at the commission in Moscow on July 23. Alexander Zemlianichenko/AP hide caption 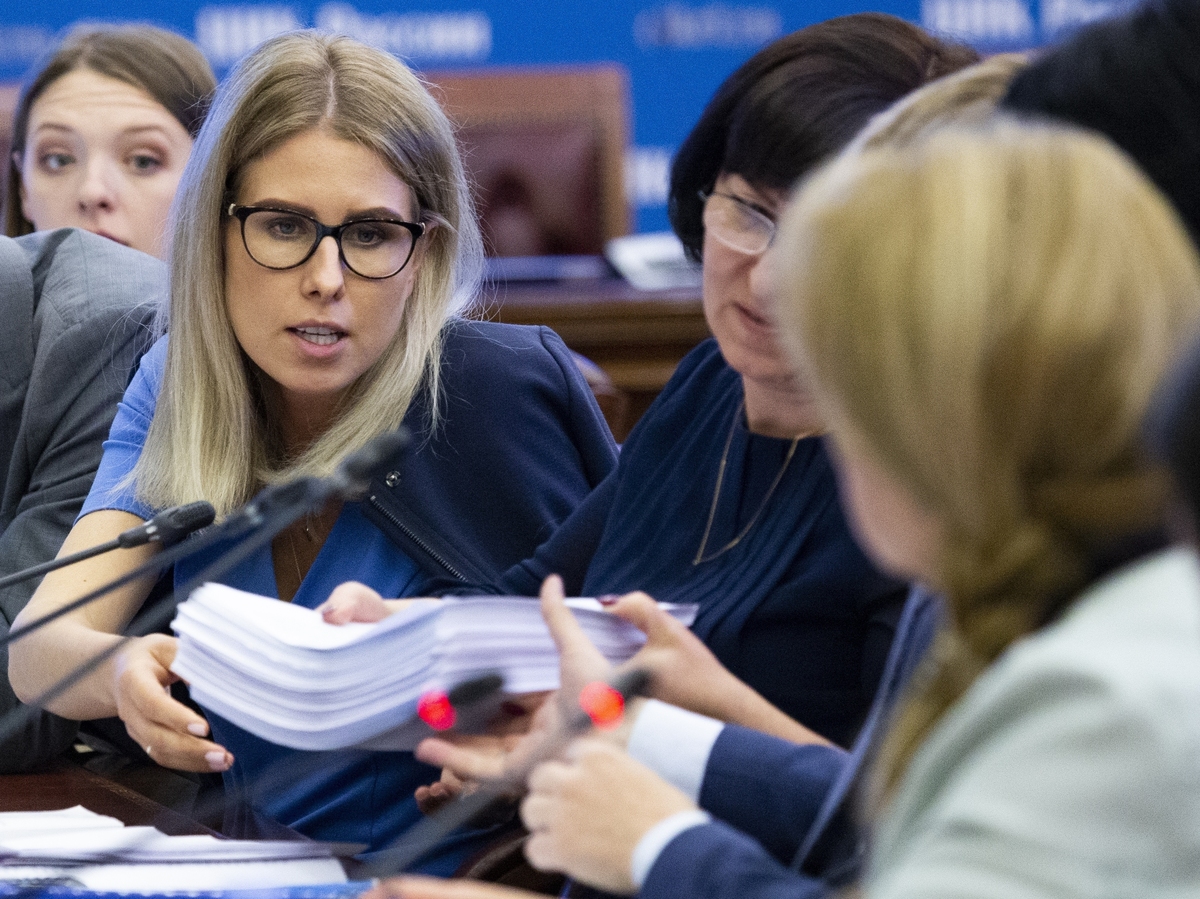 Sobol (left) gives election documents to Ella Pamfilova, head of the Russian Central Election Commission (right, back facing camera), during a meeting with opposition candidates at the commission in Moscow on July 23.

As for Sobol and other opposition politicians, election officials determined that too many of the signatures they had collected to register their candidacies were invalid. Ella Pamfilova, the head of Russia's Central Election Commission, accused Sobol and her fellow opposition candidates of trying to "blackmail" their way onto the ballot via the threat of street protests.

"You're spitting on all democratic procedures and think you belong to a special caste that can demand privileges for itself," Pamfilova said during a meeting with Sobol earlier this month. Pamfilova said Sobol was more interested in staging a show than discussing the reasons for her rejection.

Sobol insisted that election authorities were following political orders to strike opposition candidates from the ballot. "If you don't want to hear the truth, switch off my microphone," she told Pamfilova.

Sobol has practice needling Russia's powerful as the author of investigative projects at Navalny's Anti-Corruption Foundation and the host of a morning show on Navalny Live. She joined Navalny's team in 2011 after finishing law school at Moscow State University.

In a blog post from jail last week, Navalny praised Sobol for emerging as "an opposition leader in her own right" — but said he was glad that she had given up her hunger strike because of the risk to her health. "It's necessary for her to be strong, also in a purely physical sense," Navalny wrote.

Sobol says she is aware of the dangers of working with Navalny. In November 2016, her husband was assaulted outside their home in an attack she says was retaliation for her investigative work. Sobol has so far avoided jail time, but she says the authorities could press criminal charges against her at any moment.

Sobol is ambivalent about expressions of support from the West, since Russian state media portray anti-government protesters as stooges of the State Department. After the last big rally, House Majority Leader Steny Hoyer issued a statement expressing "solidarity" with the demonstrators and calling on Russian authorities to allow opposition candidates on the ballot.

"The West has its own interests, and I don't have any hope for help from the West. I think only the people of this country can bring about some kind of change," she says. At the same time, she adds, the Kremlin pays close attention to international opinion, which may be what is keeping her out of prison.

Sobol and the other opposition candidates have failed in their attempt to run for office in next month's election, but time is on their side, says political scientist Radchenko.

"The government enjoys the benefit of brute force, and in the short term it works for them," he says. "But since it's an aging regime, in the mid- to long term the opportunity is there for the opposition to consolidate its position in society."

Sobol declines to predict what will happen after the city council election — except that she will continue fighting for political change.