Accessibility links
'Late Migrations' Review: Margaret Renkl's Essays Make A Perfect Summer Book Margaret Renkl's vivid and original essays capture the cycle of life in a new book that will make you want to stay put, reread and savor everything about the moment. 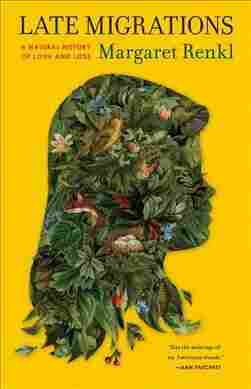 A Natural History of Love and Loss

Essayist Margaret Renkl writes about what she calls "backyard nature," which, to those of us who live in crowded cities, might call to mind creatures to trap or squash, like rats, squirrels, mice and water bugs. Renkl, however, grew up in Alabama and now lives in Tennessee, so her catalog of all creatures great and small is, at once, more expansive and accepting, and includes chickadees, red-tailed hawks, rat snakes, rattle snakes and crawdads.

If you've happened upon the poignant and off-road opinion pieces Renkl writes as a contributor to The New York Times, you already know that the natural world is something she closely observes and uses as a springboard to contemplate other, less tangible subjects. The accidental death of a migratory bird for instance, will lead Renkl to a fresh reflection on impermanence and our limited power to protect the people and things that we love.

Late Migrations is, to my mind, a perfect book to read in the summer. Renkl scatters short autobiographical essays in between short nature pieces, so that her life story and her life's passion intertwine, like a fence post and a trumpet vine. For readers lucky enough to associate summer with family vacations, where cousins, parents and grandparents might all squeeze together into campers or cabins, Renkl summons up memories of familial closeness tinged with an acute adult awareness of how fleeting everything is. In a gorgeous, barely half-page essay called "In the Storm, Safe from the Storm," Renkl recalls summer thunderstorms when she would sit on her father's lap in a chair placed in the open front door of their little house. She says:

The rain comes and I feel it with the tips of my toes, but they are the only parts of me that get wet, for I have drawn my knees up to my chest under my nightgown, and my father has unbuttoned his corduroy jacket and pulled it around me, and wrapped his arms around me too. I lean into him. I feel the heat from his body and the cool rain from the world, both at once.

This is the kind of writing that makes me just want to stay put, reread and savor everything about that moment. But, all too soon, Renkl is writing about leaving home to go to graduate school, marrying, having children, watching them grow up and away, and taking on the role of caregiver as her parents age and die.

Not all is loss. After her father's death, Renkl says her 71-year-old mother, who'd grown up on an Alabama peanut farm and "had no feeling at all for stories as a source of pleasure or solace," discovered the novels of Jane Austen and then became such a voracious reader she went on to devour racy Jane Austen fan fiction! But all too soon, Renkl's mother succumbs to a cerebral hemorrhage. About her humble mother's last ride from house to hospital, Renkl writes: "She left in a state much larger than herself — two fire trucks, an ambulance, a rolling stretcher pushed by big men."

Late Migrations is a vivid and original essay collection that's a little hard to characterize because — to borrow from the title of a novel by Jeannette Haien, another one-of-a-kind writer — Renkl's subject here is "the all of it." By that I mean the cycle of life, out there in nature and inside our own families and our own bodies. I'll leave you with a final image that speaks to Renkl's gift for capturing the transience of things, large and small. This is from an autobiographical essay called "Faith," where Renkl, as a child, is sitting in church, playing with her great-grandmother's hand. She remembers how:

I pinch the skin above her middle knuckle and then I let it go. I count to myself, checking to see how many seconds it can stand upright, like a mountain ridge made by a glacier in an age long before mine. Slowly, slowly it disappears. Slowly, slowly it throws itself into the sea.

Read an excerpt of Late Migrations