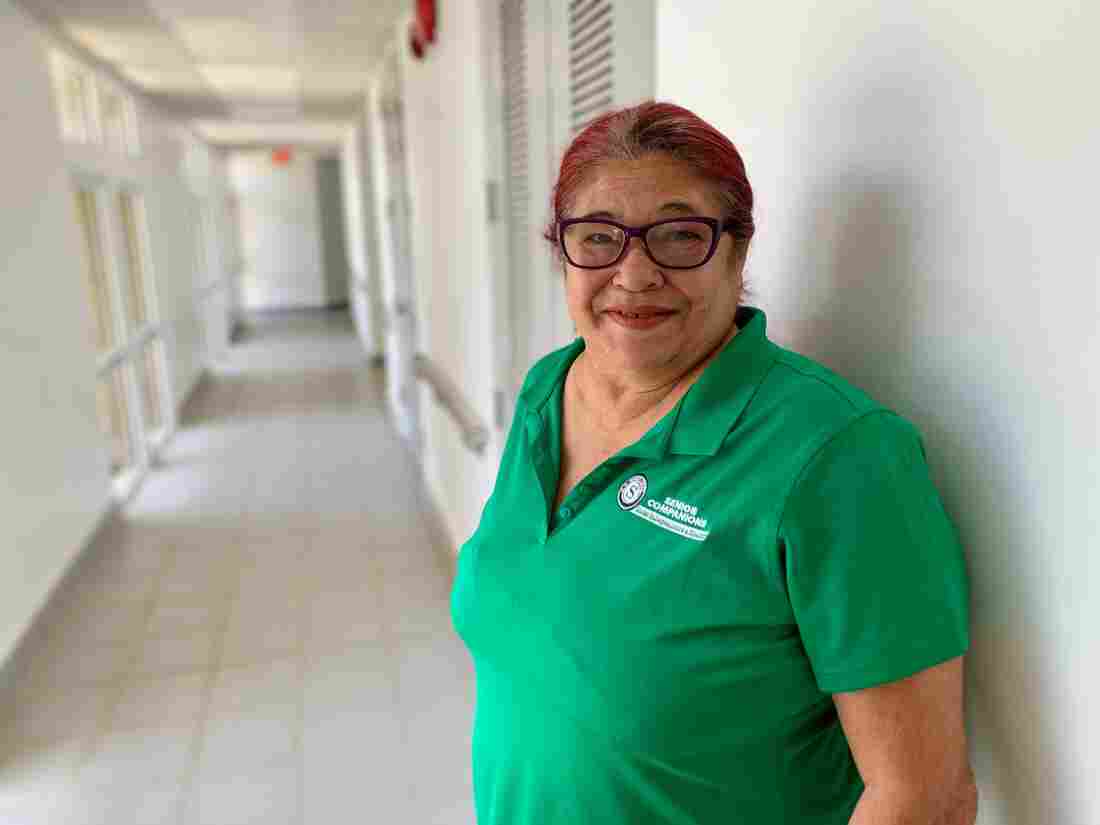 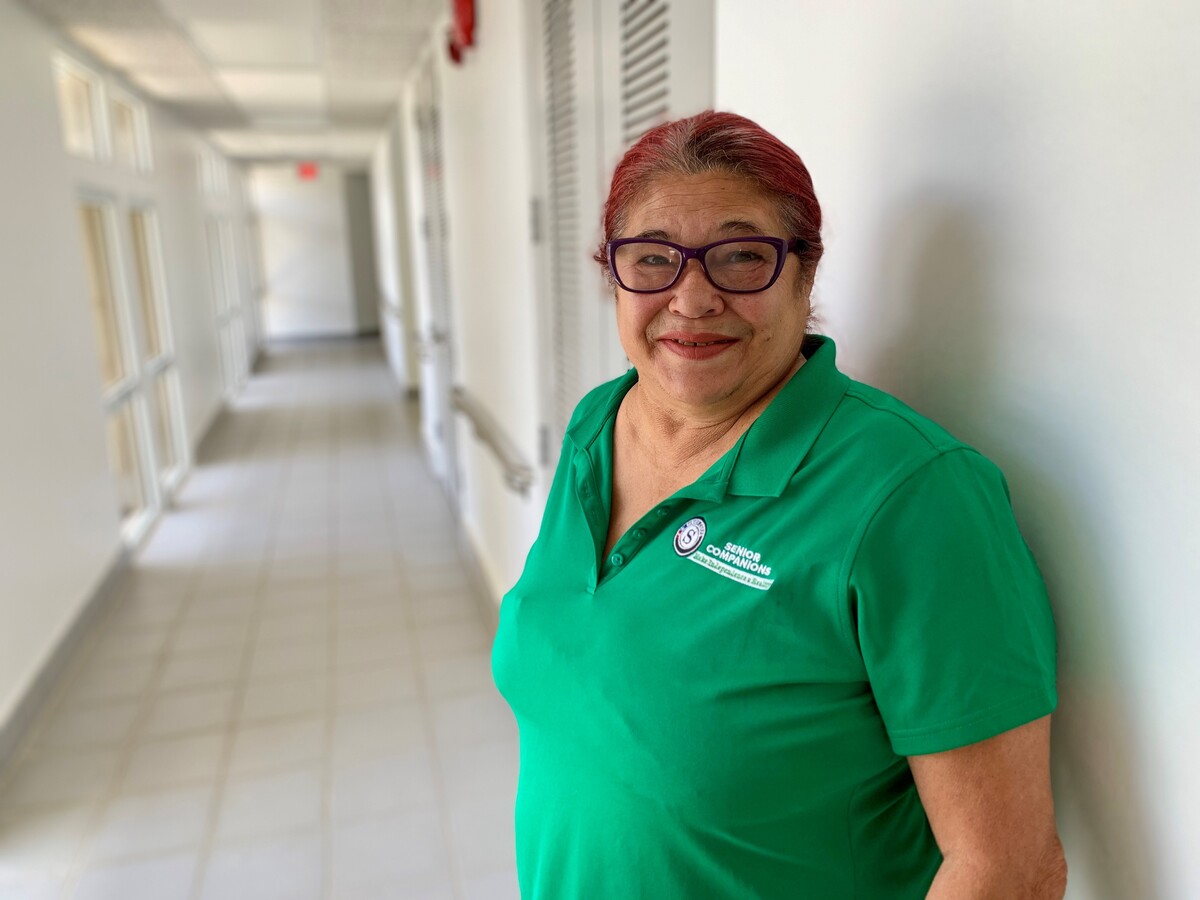 Carmen Chevere says living through Hurricane Maria has left her anxious and fearful.

On a muggy morning in Rio Piedras, a San Juan suburb, about three dozen volunteers dressed in parrot green polo shirts are gathered in a brightly lit conference room of El Retiro, a retirement community. The group is mostly women between 60 and 80 years old.

"What is resiliency?" asks Miguel Marrero. He's a psychologist and mental health program manager for Americares, a relief and development organization. He leads the discussion in his native Spanish. "We've been hearing this word over and over since Maria."

Maria, a deadly Category 4 hurricane, ravaged Puerto Rico, the Virgin Islands and Dominica nearly two years ago, and recovery has been slow. It's not just Puerto Rico's infrastructure that was battered. Emotionally, many here are still fragile.

After some nudging, one of the women shares her thoughts about what it means to be resilient.

"It's something ... that comes back to its original state," says 61-year-old Carmen Chevere. She came to learn to handle her own fears about another hurricane. Chevere is also a volunteer caregiver with Esperanza para la Vejez, or Hope for the Elderly, a local organization that finds support for elderly people in need of help such as cooking, taking medication, bathing or just in need of company.

Chevere, a lively woman with bright red hair and purple-frame glasses, still has vivid memories of the devastation and anxiety felt during Hurricane Maria. One of her neighbors died because she couldn't find insulin, she says.

Chevere's house was severely damaged by Maria. Her daughters left the island soon after the hurricane.

"They just forgot about me," she says, although her son remained. "He takes care of me," she said as her eyes began to well up with tears.

Through sobs, Chevere says: "Now I live in fear of another hurricane and we are not ready yet. We are not strong enough yet. Every time I hear about a hurricane, I feel pain and I lose my bearings."

Like Chevere, many others in Puerto Rico are still having a hard time coping with everyday life and understanding that what the island went through during Maria wasn't a small event. Across the island, more than 3 million people saw their communities devastated. Many lost their homes, their jobs, or families and friends.

"After Hurricane Maria, many individuals were having difficulty dealing with emotions," says Dr. Brenda Rivera-García, Puerto Rico director for Americares. "They could deal with their day-to-day logistics of where to go and get services, but the emotional part was difficult for them." 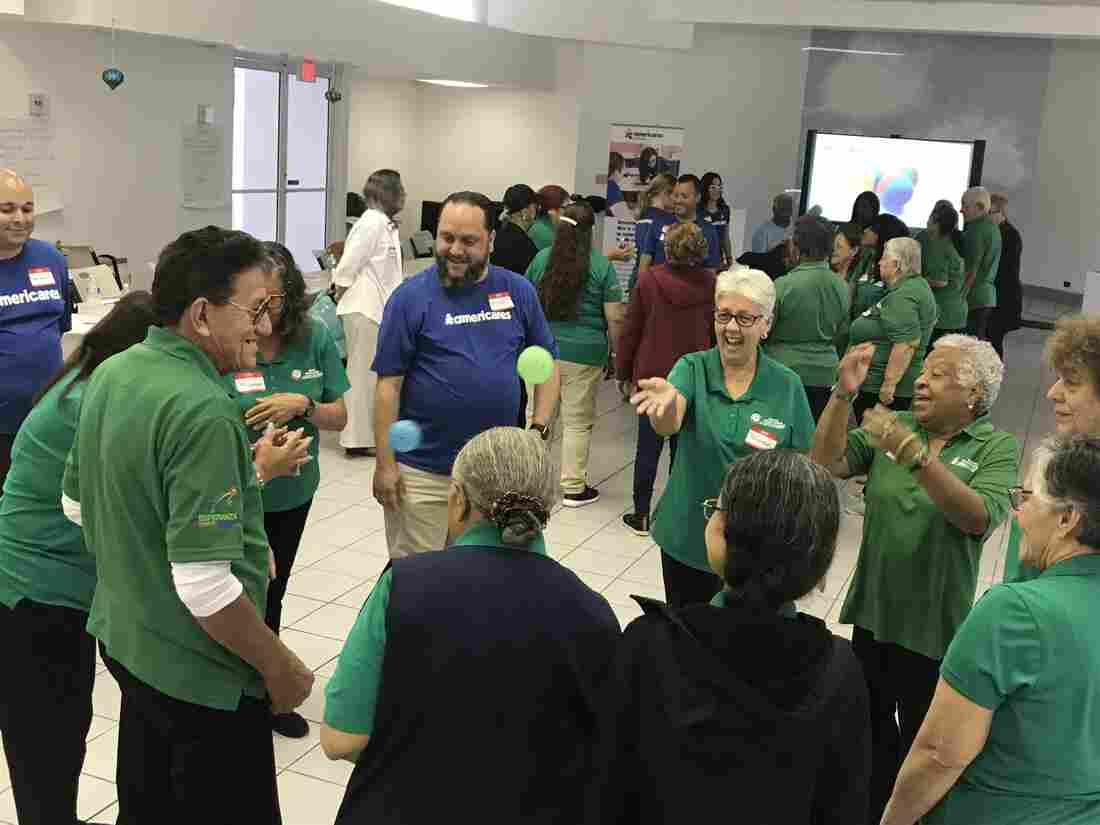 At a retirement community in Rio Piedras, exercises help volunteers who work with the elderly learn to cope with emotional stress. Greg Allen/NPR hide caption 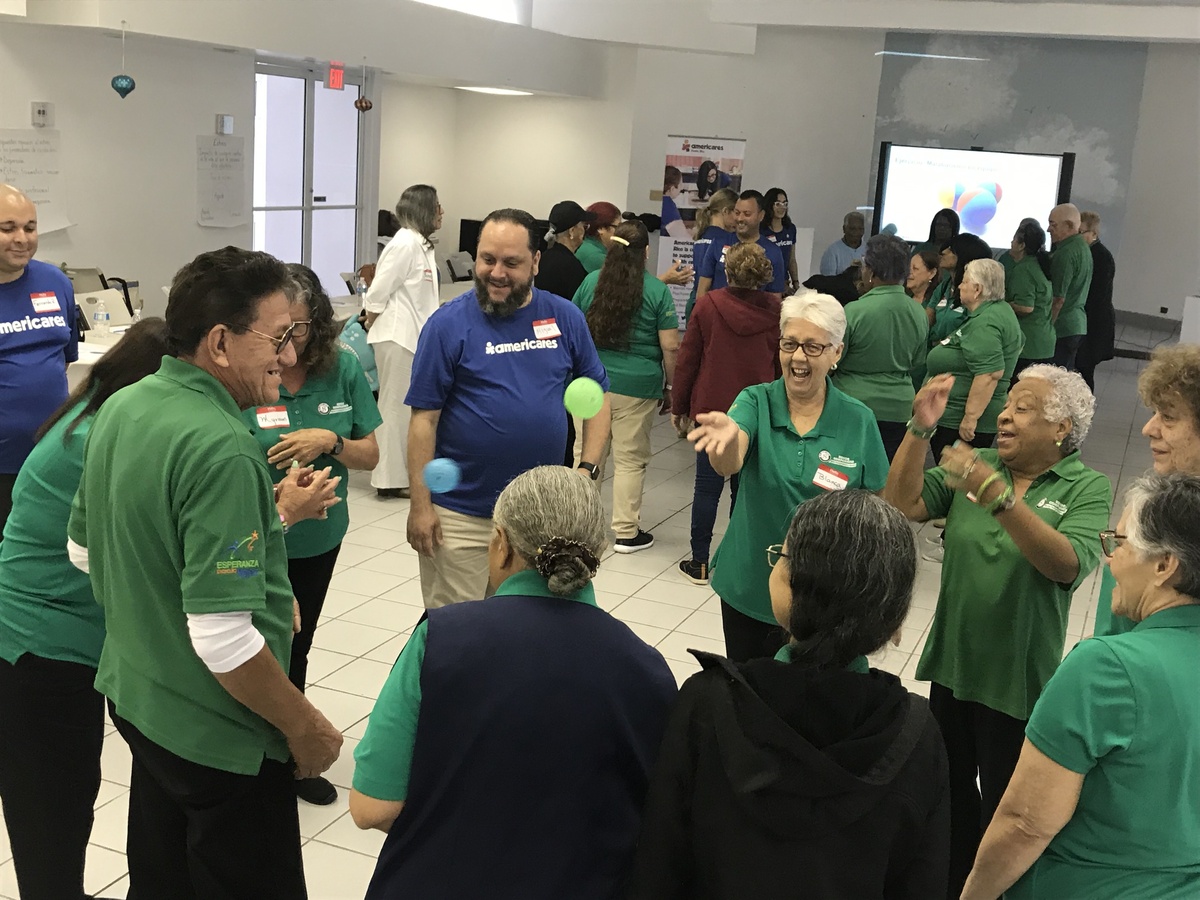 At a retirement community in Rio Piedras, exercises help volunteers who work with the elderly learn to cope with emotional stress.

The mental health toll of Maria on Puerto Ricans is still palpable, says Rivera-García. Months of living without power, in damaged homes without enough food, clean running water and medicine, left many suffering from anxiety, stress and depression, and often unaware of what to call their feelings.

With a new hurricane season and the second anniversary of Hurricane Maria approaching, emotions are resurfacing. Marrero says, "We know that this time of year depression, anxiety and stress symptoms get really high in people."

"We not only give them resources, but we want to hear from them," Marrero says. "They are all survivors; they lost family members and livelihoods and property to Maria."

The volunteers in this class say they don't know when or if another hurricane will hit the island. But they believe they are more resilient now, with the mental strength they'll need to recover from another disaster.

Chevere became a volunteer after Maria. Despite her own problems, she takes care of a 93-year-old man.

"I check on him, I make him coffee, I clip his nails," says Chevere. "I wash his clothes. I do everything you'd do for someone who's your father."

"This job got me out of my funk," she says. "When I wake up in the morning, I have hope because of 'my viejito' this elderly man I take care of," she says. "If he's standing up, I can stand up."