Accessibility links
Review: 'Brittany Runs A Marathon' Is A Makeover Movie, In The End Jillian Bell and the supporting cast are charming in this underdog story about a young woman who goes from hating exercise to running a marathon. But don't expect too much that's new. 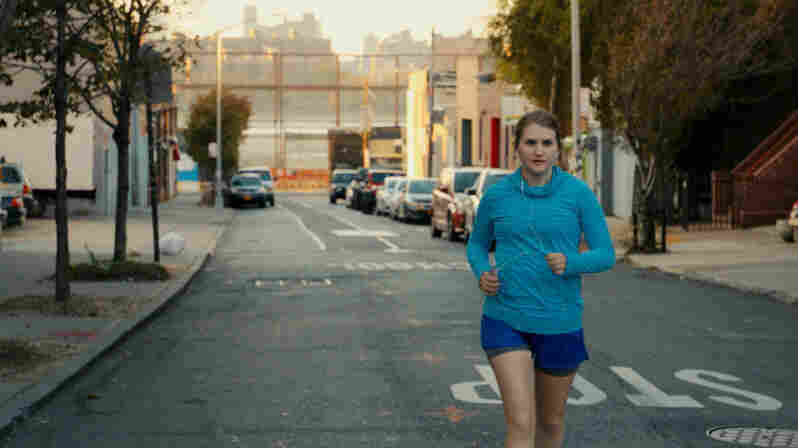 In her first starring role on the big screen, comedic actress Jillian Bell of 22 Jump Street and Rough Night plays Brittany, an unhappy and directionless ticket-taker who decides to make a change — by running a marathon. Amazon hide caption 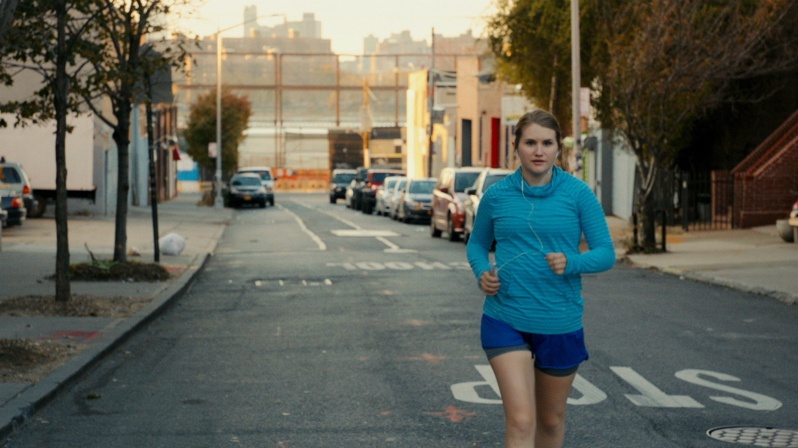 In her first starring role on the big screen, comedic actress Jillian Bell of 22 Jump Street and Rough Night plays Brittany, an unhappy and directionless ticket-taker who decides to make a change — by running a marathon.

Why would a person who has never been interested in running become a person who wants to run a marathon? Not why would she get more active, but why a marathon? That's the question that lingers at the edges of Brittany Runs a Marathon, a likable and upbeat comedy that never quite comes together as a story.

Based — pretty loosely, it appears — on the real-life story of a friend of writer-director (and playwright) Paul Downs Colaizzo, Brittany Runs a Marathon stars Jillian Bell as Brittany. She's your basic unhappy and directionless 27-year-old, whose boring job taking tickets at a theater is about the best thing she has going. When a doctor tells her she needs to lose weight and get in shape, she starts eyeballing a neighbor (Michaela Watkins) who runs every day, and before you know it, she's putting on sneakers and running one block. And then a little farther, and then a little farther, and then she decides to run a marathon. Why? She likes running. That's about as much as the film can tell you. What you cannot get from a running montage in which Brittany looks progressively less miserable, it cannot explain.

Over the course of her training, Brittany doesn't just get in shape; she grows up. She becomes more patient, more reasonable, more pleasant to be around, a better friend, a less judgmental person — either her training coincides with her shaping up in a lot of other ways, or it causes her to shape up in a lot of other ways. Marathon training isn't just her workout — it's her therapy as well.

The obvious question all this raises is whether the film can rise above the cliché in which a fat girl loses weight, becomes "pretty," gets a boyfriend, gains people's admiration and goes from being a failure to being a success. And the answer is: sort of.

There's certainly a lot of attention in the film to the messaging — to the idea that it's not really about weight and it's not really about her body. It's about her learning to take care of herself, commit to something, persevere in the face of difficulties and so forth. Colaizzo clearly came at this story as someone who already thought his friend was fun and likable (if a complete mess) before she became a runner, and Brittany is written from the beginning to be sympathetic and not a cartoon.

But all this goes only so far. It's very telling that the real Brittany, the production notes reveal, was the managing director of a theater company, not a ticket-taker. Her parents weren't dead the way this Brittany's are, and it appears that she had more going for her than the fictional Brittany does. So why was it important to take away her family and her job?

The emphasis on the story as "inspirational" may be part of it. Colaizzo has said he wanted to turn the camera on the stock character who would be "the hot mess, the fat sidekick" and explore her humanity and how she feels, but he also calls her story "inspirational." The film certainly treats Brittany as the hot mess and the fat sidekick (complete with Bell in prosthetics and a fat suit), and it does tell her story. But she gets beyond those labels only when she's a runner. Bell certainly makes Brittany easy to root for, and her victories are fun to watch. But is the only story about the "fat sidekick" that's worth telling the one where she runs a marathon? Is inspiring others what proves her humanity? And does she have to work a going-nowhere job in order to set the stage for the inspiration to come? It's worth asking what would be her story if the massive accomplishment of running the marathon were primarily its own reward, without the implication that everything else in her life fell into place along with it?

There's really nothing particularly insidious here, which is an improvement when it comes to comedies in which someone wears a fat suit. It's an affable enough loser-turned-winner story; Bell is solid, and she gets great support from the reliable Watkins and from Utkarsh Ambudkar in a terrific and charismatic turn as the guy who quite literally strolls into her life unannounced. Brittany Runs a Marathon is reaching for a freshness it doesn't really have and for an interest in unexplored lead characters it doesn't quite demonstrate. But if you don't expect too much, you likely won't leave disappointed.