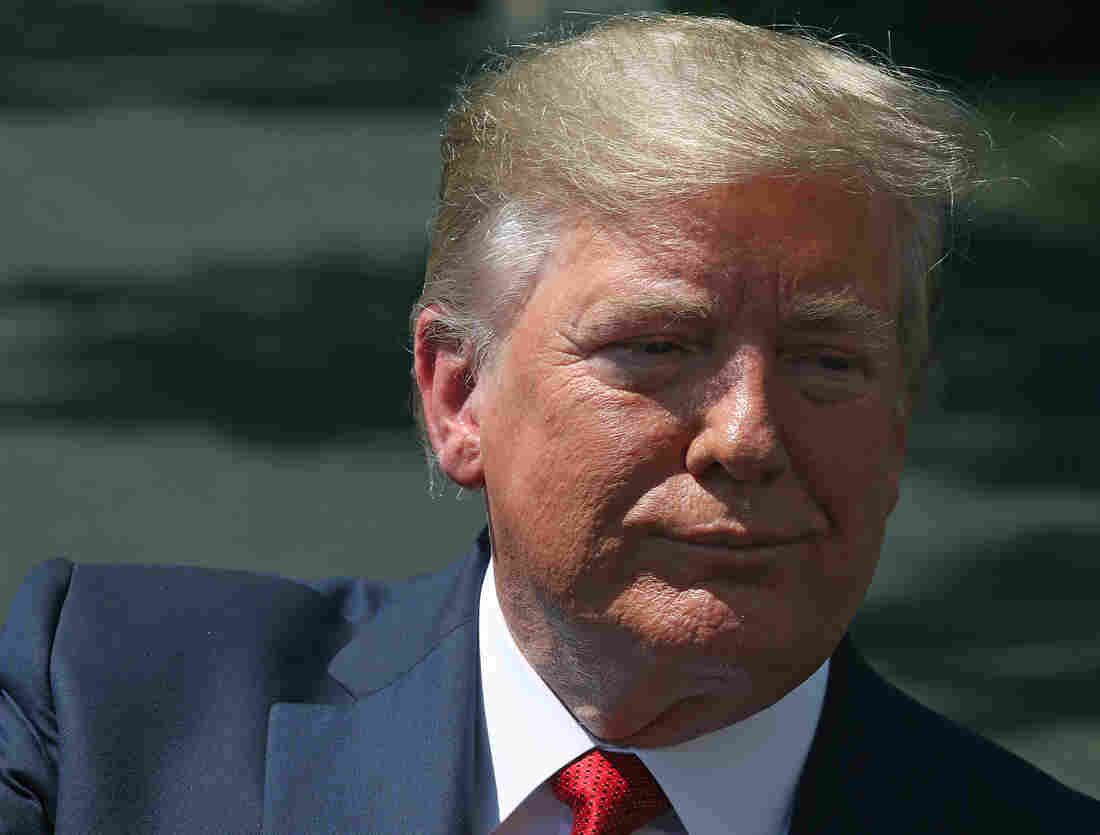 President Trump speaks to reporters outside the White House on Wednesday before departing for Kentucky. Mark Wilson/Getty Images hide caption 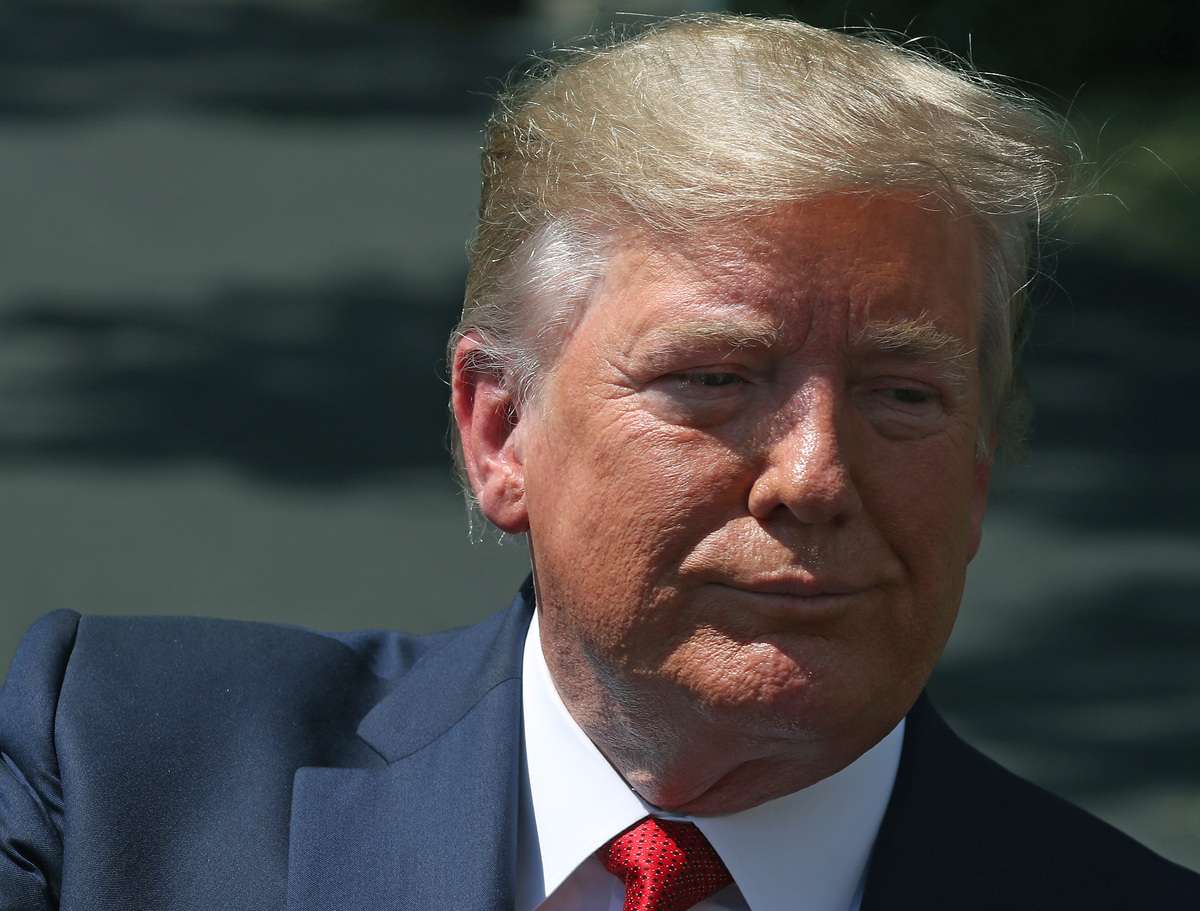 President Trump speaks to reporters outside the White House on Wednesday before departing for Kentucky.

President Trump doubled down Wednesday on his remarks that American Jews who vote for Democrats are disloyal to Israel.

It was the second time in two days that the president questioned the loyalty to Israel of Jewish people who vote Democratic. On Tuesday, he questioned their smarts, too. "I think any Jewish people that vote for a Democrat, I think it shows either a total lack of knowledge or great disloyalty," Trump said from the Oval Office.

Trump's comments display a lack of understanding of how and why Jewish Americans vote the way they do, which is overwhelmingly Democratic. While Israel is a threshold issue for Jewish voters, it is not determinative to the votes of most of them — and many don't agree with President Trump's or Republicans' approach to Israel. Jewish people who vote Democratic care about what Democrats care about — social justice, health care, climate change, the welfare of immigrants and more.

Voters who identify as Jewish made up only about 3% of the U.S. electorate in recent presidential elections, but they have voted overwhelmingly Democratic. Since 1968, in fact, Jewish voters have voted on average 71% for Democrats. That was the exact number that went for Hillary Clinton in 2016.

Their voting power in presidential elections can be felt in competitive states, like in South Florida, the north Philadelphia suburbs and to a lesser degree in Pittsburgh, Las Vegas, Cleveland, Detroit and outside Atlanta and Denver.

Trump hopes to peel off some Jewish voters in what's expected to be a close reelection fight. He's trying to highlight comments by Democratic Reps. Ilhan Omar of Minnesota and Rashida Tlaib of Michigan, who have been hotly critical of Israel. Omar, in particular, has been criticized for some of her remarks.

Democratic leaders and many rank-and-file Democratic elected officials have tried to distance themselves from their views. Trump, though, has tried to, as he says, make the congresswomen "the face of the Democratic Party" in an attempt to help him next year.

But his strategy of highlighting Democrats' not walking in lockstep with Israel has been tried before — to no avail for Republicans. Think: President Barack Obama's nuclear deal with Iran or his criticism of Israeli settlement expansion. Obama still won 69% of the Jewish vote in 2012 and 78% in 2008.

What's more, Jewish voters went for Democrats in the 2018 midterms by an even higher percentage — 79%. And that was after Trump moved the U.S. Embassy in Israel to Jerusalem.

"We see evidence that it [the Jewish vote] is moving even more towards Democrats now during Trump's presidency," said Jim Gerstein, a Democratic pollster. He added that American Jews don't even necessarily agree with Trump's policies toward Israel — and they have other concerns.

"They're so hostile to Trump himself because of all the immigration issues and white nationalism and the rise of anti-Semitism, all that makes them so hostile to him that anything he says or does doesn't matter — even if they were to agree with it," said Gerstein, who called views of Israel "a threshold issue" for Jewish voters. "But they don't necessarily agree with him on the Israel stuff to begin with."

Jewish voters, like Catholics, vote less based on religion, but more reliably on their partisan identification. In other words, if someone is a Republican, they vote like one and vice versa.

The "disloyalty" claim reminds some of an anti-Semitic trope.

"This loyalty claim or disloyalty claim is actually a centuries-old anti-Semitic idea that dates back to European monarchies," said Rabbi Alissa Wise, deputy director of Jewish Voice for Peace. "This idea that Jews are somehow disloyal to or have more loyalty to an entity outside of the state to which they live."

It's something for which Omar also faced criticism in February when she said, "I want to talk about the political influence in this country, that says it is OK for people to push for allegiance to a foreign country."

The Trump campaign argues that Democrats are the ones who "embrace and defend the most vitriolic anti-Semites in their midst" and are "excusing and permitting such anti-Jewish venom to be spewed so freely," said Michael Glassner, the Trump campaign's chief operating officer, in a statement.

Trump's comments Wednesday also came a day after he referred to Omar and Tlaib when he said, "Where has the Democratic Party gone, where they're defending these two people over the state of Israel?"

Trump's remarks prompted a conservative radio host to call him the "King of Israel," a comment that Trump retweeted.

In response to a question about Reps. Ilhan Omar and Rashida Tlaib, President Trump said that "any Jewish people who vote for a Democrat" show a "total lack of knowledge or great disloyalty." https://t.co/rSrHe7pFy0

Tlaib and Omar were initially denied entry into Israel for a planned trip earlier this month because of their support for boycotts of the country. The decision from Israel came after Trump urged it. He all but taunted Israel, saying it "would show great weakness" if Israel let the two American congresswomen in.

Israel relented and said it would allow Tlaib entry to see her grandmother on the West Bank, as long as she didn't voice support for boycotts on her trip. Tlaib decided she would not go and called the conditions "oppressive."

Meanwhile, Democrats in the House, who don't always agree with Omar and Tlaib, are furious with Israel's ambassador to the United States, Ron Dermer, for his role in the controversy, the Jerusalem Post reported. Democrats may not take any more meetings with him, the paper reported, especially after Democratic leaders thought they had gotten assurances that the two congresswomen would be allowed to travel.

There has long been a degree of distrust between Democrats and Dermer because he had worked as a Republican operative and helped orchestrate Netanyahu's speech to Congress in 2015, when Republican John Boehner was speaker, in which Netanyahu criticized then-President Obama's policy toward Iran.

The Trump campaign apparatus went into overdrive on the subject Wednesday. Kayleigh McEnany, a campaign spokeswoman, blasted the BDS Movement, which seeks boycott, divestment, sanctions of Israel as well as an end to international support because of Israel's treatment of Palestinians.

"It is an actual movement that seeks to destroy the state of Israel by boycotting them," she said Wednesday on Fox News. "It is the same goal as Iran, who wants to wipe Israel off the face of the map. It is an anti-Semitic movement. It is disgusting."

But are Trump and his campaign's actions about winning over Jewish voters at all?

Jeremy Ben-Ami of the progressive Jewish lobbying group J-Street doesn't think so. They seem more aimed at exciting the Trump base, Ben-Ami said.

"Israel is an issue not simply for the Jewish community," he noted. "It is an evangelical issue. It's an issue in many red states. And it is comparable as a cultural divide on things like guns, abortion and other culture war issues."

Trump has certainly sought to use cultural grievances as a way to keep his base on board throughout his presidency.

And if that happens to peel away some voters in the process — or make them stay home — all the better.