Accessibility links
Greenland: Did Harry Truman Really Try To Buy Greenland Back In The Day? The Truman administration saw huge strategic value in the island as a geographic bulwark against the Soviet Union. Ultimately, the U.S. got access to Greenland without needing to purchase it.

FACT CHECK: Did Harry Truman Really Try To Buy Greenland Back In The Day?

FACT CHECK: Did Harry Truman Really Try To Buy Greenland Back In The Day? 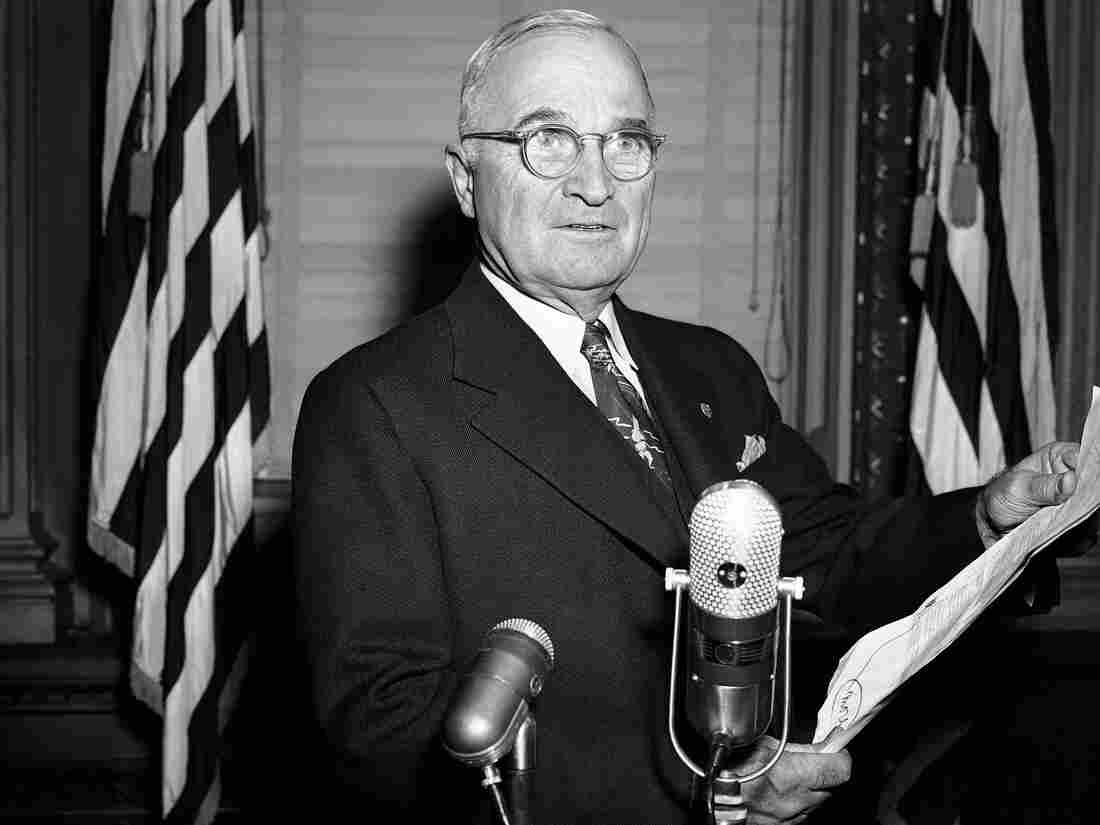 President Harry Truman read a statement to reporters in the White House. His administration secretly negotiated use of sites in Greenland during the Cold War, including a prospective sale. Henry Griffin/AP hide caption 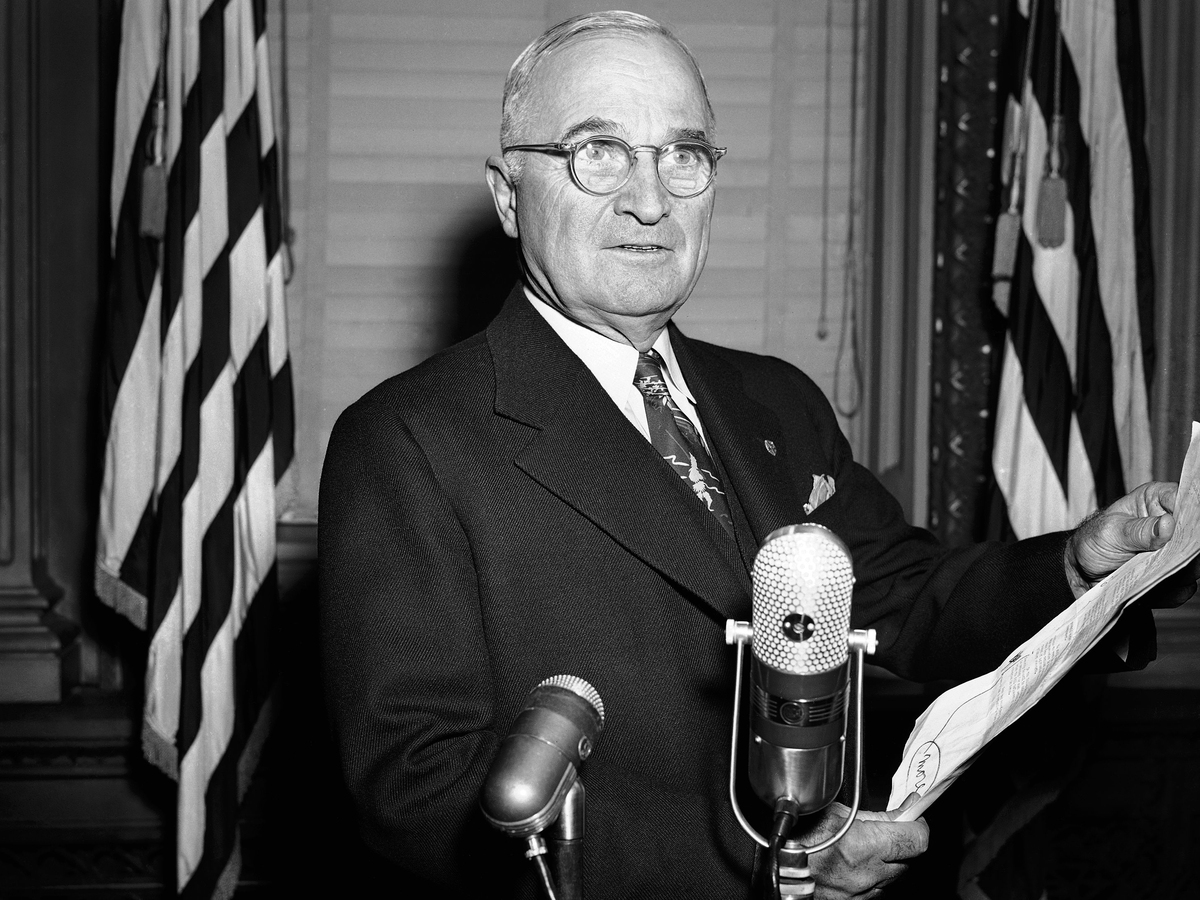 President Harry Truman read a statement to reporters in the White House. His administration secretly negotiated use of sites in Greenland during the Cold War, including a prospective sale.

President Trump defended the idea of buying Greenland — derided by critics within the United States and rejected by Denmark, which controls it — in part by saying the idea first came from President Harry Truman.

Yes — but it's complicated.

Trump's acknowledgment that he really has been talking about the United States buying Greenland — and that he was offended when Denmark's prime minister called the idea "absurd" — were the jaw-dropping coda from an Aug. 16 report in The Wall Street Journal.

The newspaper reported that the Greenland idea has been a pet project of Trump's for some time. Once it broke into the open, Trump not only owned up to the idea, but said he was wounded when Danish Prime Minister Mette Frederiksen rejected it as beneath consideration.

"I thought the prime minister's statement ... was nasty," Trump said on Wednesday. "It was not a nice way of doing it. She could have just said 'no, we'd rather not do it' ... they can't say 'how absurd.' "

Trump sought to make the case that his plan to buy Greenland was not, in fact, absurd, because he wasn't the first to come up with the idea.

The administration of President Harry Truman pitched a sale to Copenhagen in 1946, in a story told in documents contained in the National Archives and revealed in 1991 by The Associated Press.

But the Truman administration did so under Cold War secrecy and no one learned about it for decades. There was no open bid and rejection as with Trump's attempt.

From Stettin in the Baltic to Trieste in the Adriatic

The situation in Truman's time also was very different for other reasons.

A dangerous chill was settling between the United States and the Soviet Union following the conclusion of war in Europe. Truman and his Soviet counterparts were arranging pieces on a strategic chessboard for what would become the Cold War.

That's why, according to the AP's account of the National Archives papers, Truman's advisers prized the geographic advantage Greenland could afford to defend against Soviet strategic bombers that might fly over the Arctic Circle toward targets in North America.

The United States opened negotiations with Denmark about using Greenland, and at one point, the American side proposed buying the island outright for $100 million in gold and the rights to a patch of Alaskan oil.

All this took place in confidence but even then — as now — the idea shocked the Danes. Here's how the AP's W. Dale Nelson described the National Archive documents' account of the exchange:

Secretary of State James Byrnes made the offer to visiting Danish Foreign Minister Gustav Rasmussen in New York on Dec. 14, 1946, according to a telegram from Byrnes to the U.S. Legation in Copenhagen.

After discussing other security arrangements for Greenland, Byrnes said he told Rasmussen that perhaps an outright sale to the United States ″would be the most clean-cut and satisfactory.″

″Our needs ... seemed to come as a shock to Rasmussen, but he did not reject my suggestions flatly and said that he would study a memorandum which I gave him,″ he said." 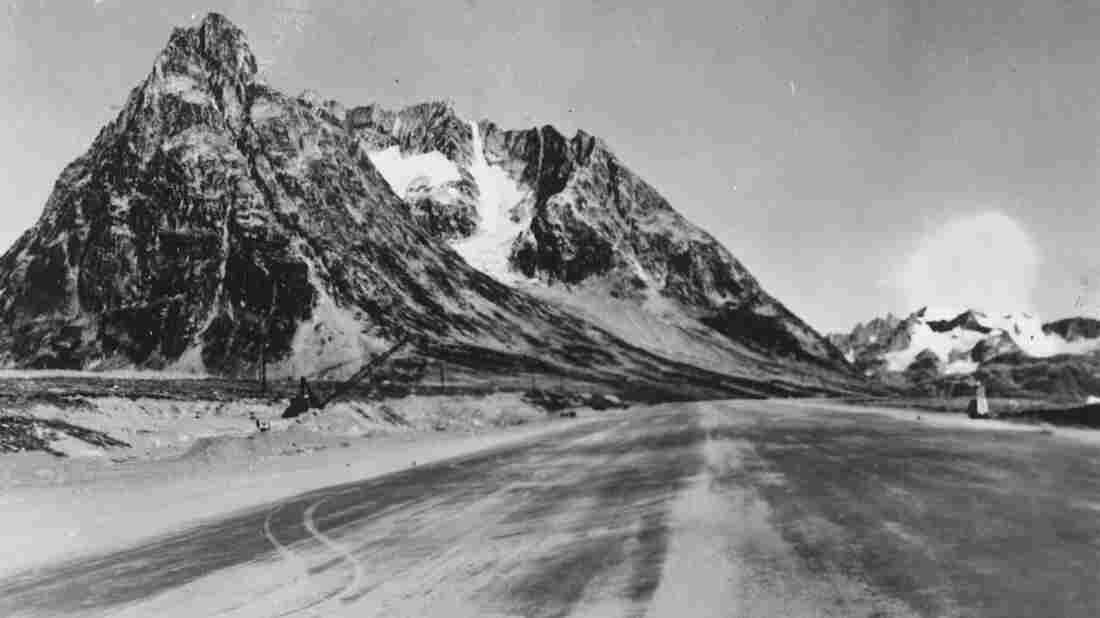 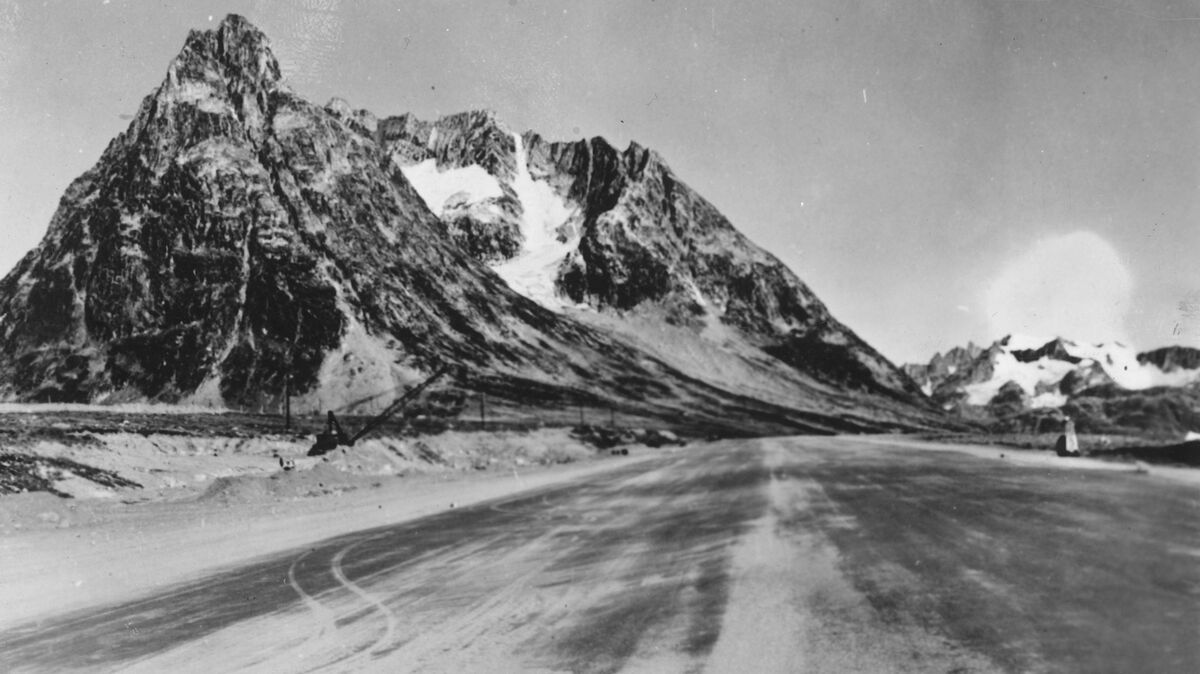 An airstrip constructed by U.S. Army engineers in Greenland, seen in 1944.

Ultimately, the U.S. and Danish governments agreed on other ways to incorporate Greenland into America's defenses.

Washington's use of global diplomacy was able to get the access the Truman administration wanted without an outright sale, and Greenland remains a self-governing overseas territory of Denmark.

Another was with bilateral agreements between the United States and Denmark over access to Greenland.

In the 1960s, the U.S. Army explored using glacial ice on the island as the base for strategic missiles aimed at the Soviet Union.

Although it ultimately didn't deploy any missiles, the Army did build a top secret, nuclear-powered base on the ice pack as part of that project. The base, Camp Century, was abandoned and sank and one day it could be in danger of being exposed by melting ice.

Strategic Air Command also used Thule Air Base, on the northwest side of the island, as an important outpost in the strategic contest with the Soviets.

The base not only hosted nuclear-armed strategic bombers, it also served as a high-stakes tripwire.

American commanders' expectation was that Thule's proximity might make it the first base that Soviet forces would attack in a war. So America's strategic posture within the continental United States was positioned to go on high alert if contact was lost with the remote station. 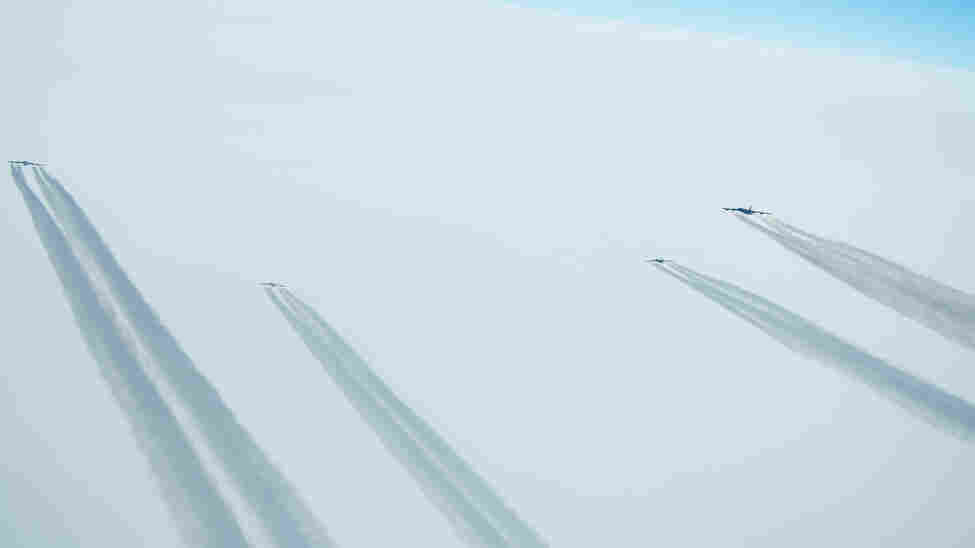 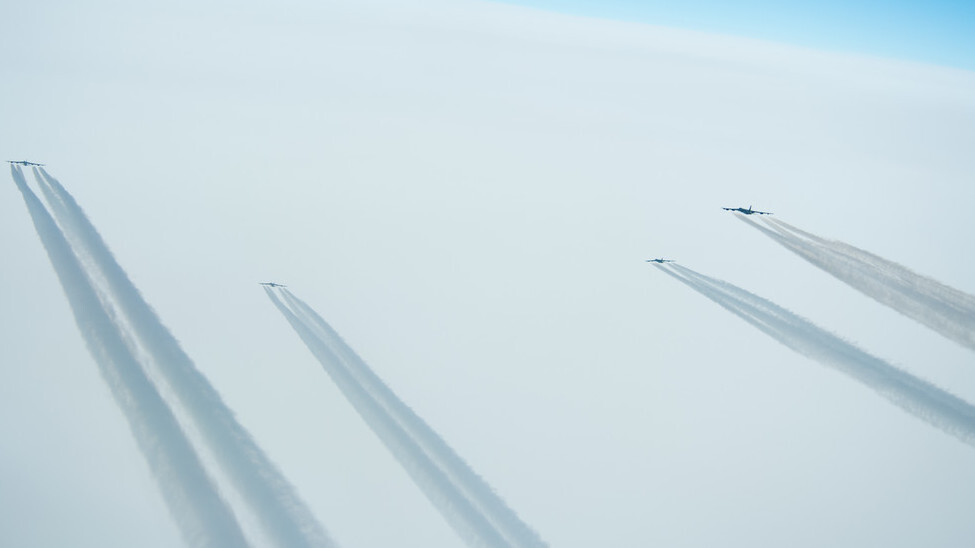 Four B-52 Stratofortresses deployed from Barksdale Air Force Base, La., fly a sortie over Norway on March 28. Bombers like these flew from Greenland during the Cold War.

In the 1960s, B-52 Stratofortress bombers armed with thermonuclear weapons flew a nonstop orbit near the base — as the "Thule Monitor" — poised to race toward the Soviet Union in case of an attack on the station.

That was until 1968, when the aircraft serving as the Thule Monitor developed a cockpit fire, prompting its crew to bail out. The bomber crashed into the Arctic glaciers and spread radioactive material from the weapons it was carrying; American taxpayers paid tens of millions of dollars to try to remediate the contamination.

Although that incident helped prompt American commanders to change their practices with live nuclear weapons, Thule has remained an important installation for the U.S. Air Force.

Today it's the home to ballistic missile and space warning sensors and the world's northernmost deep water port, the Air Force says.

A previous version of this story located Thule Air Base on the northeast side of Greenland. It is actually on the northwest side.