Accessibility links
Jay-Z Can't Roc With The NFL Unless Kaepernick Gets A Seat At The Table There's still room for Roc Nation's controversial NFL partnership to do impressive work — as long as the black billionaire behind it makes room for the struggle already in progress.

Opinion: Jay-Z Can't Roc With The NFL Unless Kaepernick Gets A Seat At The Table

Opinion: Jay-Z Can't Roc With The NFL Unless Kaepernick Gets A Seat At The Table 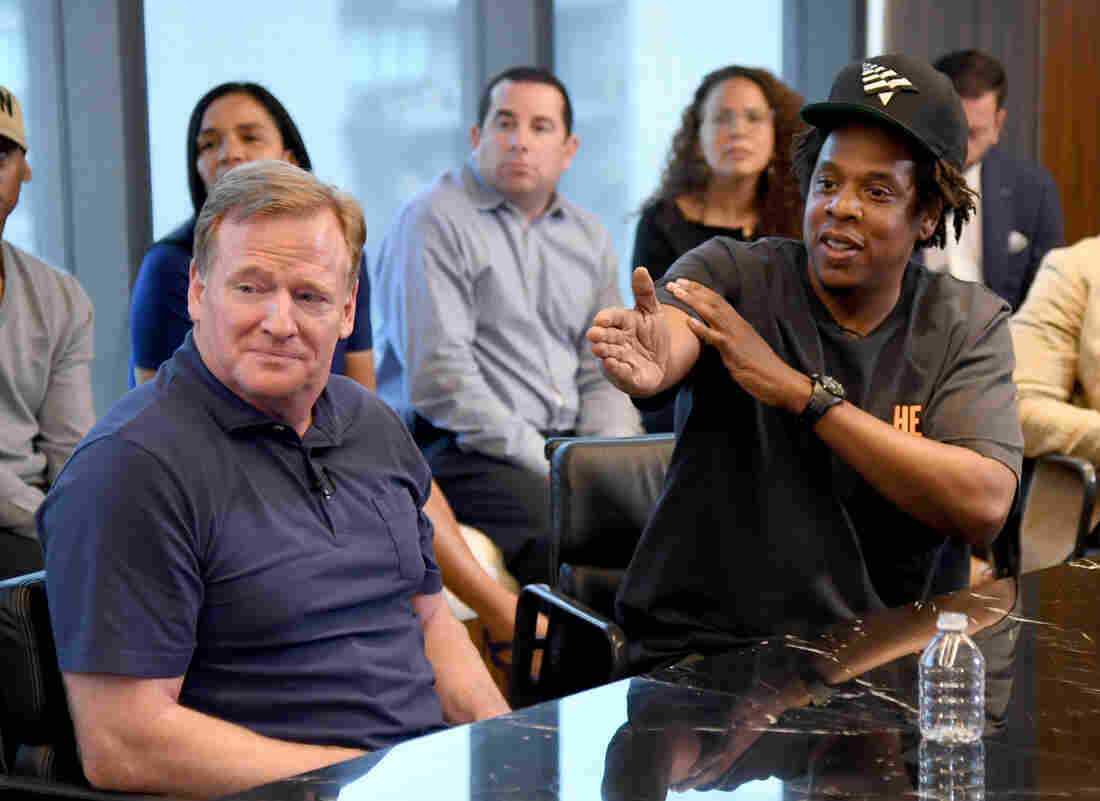 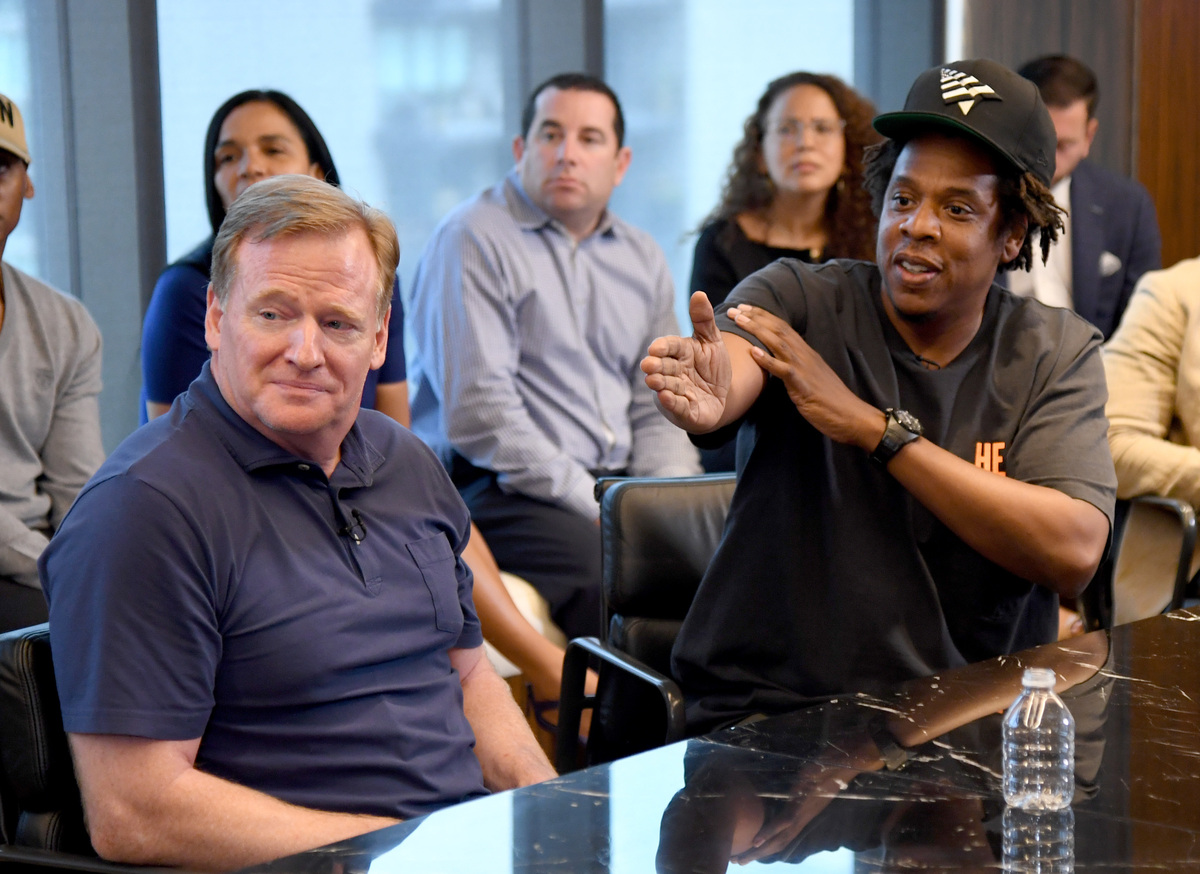 NFL commissioner Roger Goodell and Jay Z at Roc Nation's Manhattan headquarters on August 14, announcing a partnership between the sports league and the rapper's entertainment company.

Ever since Jay-Z announced a partnership between his Roc Nation entertainment company and the NFL — ostensibly to help the league step up its Super Bowl halftime show and amplify its social justice program platform — the whole thing has played out like a tragic blaxploitation flick. One powerful scene in particular from the era keeps replaying in my mind, like an eerie precursor to last week's press conference and the resulting fallout. It comes from The Mack, that 1973 cult classic about an ex-con who turns Oakland into a pimper's paradise while dodging both the clutches of The Man and the revolutionary angst of The Brother Man. With the opening notes of Willie Hutch's "Brothers Gonna Work It Out" stirring in the background, Goldie the pimp (Max Julien) and his movement-minded brother Olinka (Roger E. Mosely) square off in a war of words pitting black capitalist against black activist — one thriving off the system's inherent inequality, the other dead-set on dismantling it piece by unconscionable piece.

"You really don't understand, do you?" Olinka asks in his red, black and green knitted beanie. "Hey man, don't you realize in order for this thing to work, we've got to get rid of the pimps and the pushers and the prostitutes? And then start all over again clean." Goldie, his wide brim tilted to the side, strikes back: "Nobody's closing me out of my business," he says. "Being rich and black means something, man. Don't you know that? Being poor and black don't mean s***."

To pimp or be pimped, that's the eternal question — and from the cheap seats, it's hard to tell which role Jay-Z has cast for himself. When it comes to espousing the ideals of free market enterprise, there is no bigger cheerleader in hip-hop than the rapper born Shawn Carter, who has come a long way from Brooklyn's Marcy projects. But when the oppressed find themselves sitting in the seat of their oppressors after two decades of musical chairs, that's no anomaly: It's the system replicating itself as designed. For his part, Jay-Z helped raise a whole generation of fans on a don't-hate-the-playa-hate-the-game ethos of black capitalism that doesn't even begin to account for how rooted the system is in white supremacy and inequality. Can't knock his hustle, but the dangerous thing about Jay's latest deal is that it comes at the cost of a struggle already in progress. Whatever his intention, he's only succeeded so far in further polarizing the movement that made Colin Kaepernick a modern-day Muhammad Ali.

"I think we're past kneeling. I think it's time for action," Jay-Z stated while announcing the deal last week, sitting alongside NFL commissioner Roger Goddell at Roc Nation's Manhattan headquarters on Aug. 14, three years to the day after Kaepernick's first protest. The partnership has effectively turned one of the NFL's most vocal (and certainly one of its most powerful) critics into a paid contractor. Two years ago, Jay wore a Kaepernick jersey during his Saturday Night Live performance. Last year, he thumbed his nose at the league with the line, "You need me / I don't need you," on the song "Apes***" that he released with Beyoncé. And when he urged artists like Travis Scott not to entertain Super Bowl performance offers, the assumption was that he was motivated by the same social politics in doing so. Now, the deal he's struck for an as-yet undisclosed amount has raised questions what his motives were before.

"Jay-Z Helps the NFL Banish Colin Kaepernick," sports journalist Jemele Hill headlined her piece for The Atlantic. Indeed, the quarterback continues to pay the price of daring to use the NFL's platform to bring visibility to social and racial injustice in America. Jay claimed last week that he had had a conversation with Kaepernick before closing the NFL deal, but refused to share the details of their talk. Kaepernick's girlfriend, radio personality Nessa Diab, called that "a lie," saying that Kaepernick was "never included in any discussion" with Jay-Z or the NFL about their eventual partnership. An anonymous source close to Kaepernick told Jemele Hill that he and Jay-Z did talk, but "it was not a good conversation."

It's easy to imagine that conversation going about as well as the one between Goldie and his brother in The Mack. Reactions to the deal have been equally explosive, especially on social media where age-old arguments about black America's best path forward for true liberation — be it market-driven or movement-driven — were reignited. "F*** Colin Kaepernick," rapper Freddie Gibbs posted on Instagram earlier this week while making it clear that he's riding with Jay-Z. (He later tweeted that he'd had an enlightening conversation with Jemele Hill, after she posted that his response was exactly what the NFL wanted.) Other vocal Jay-Z supporters have included Vic Mensa and Cardi B, but with the caveat that they both believe Jay's involvement will ultimately help Kaepernick get back into the league. Roc Nation's own J. Cole and filmmaker Ava DuVernay have been among the high-profile supporters of Kaepernick in the past week, while Carolina Panther Eric Reid, who was the first to join Kaepernick's protest, called Jay-Z "asinine" for saying the time for kneeling has passed. On the day of the press conference, Kaepernick himself wrote on Twitter,"I continue to work and stand with the people in our fight for liberation, despite those who are trying to erase the movement!"

According to Jay-Z, his switch from staunch NFL critic to potential ally came not as an abrupt about-face but through a series of conversations with Goodell over the last several months. He credits Patriots owner (and President Trump supporter) Robert Kraft with helping to start their talks; Kraft has also played an active role in Roc Nation's criminal justice reform initiatives, most notably as a supporter of Meek Mill. Plans for collaboration include expanding on the league's existing Inspire Change initiative by adding a program of unofficial anthems ("Songs of the Season") from select artists to be played during NFL broadcasts, a podcasting platform for players ("Beyond the Field") and a visual album of Super Bowl halftime shows. Those plans have already been criticized as a platform designed to move player protests off the field, and it already seems to be having the subtle effect of silencing NFL players on the field. One day after Miami Dolphins player Kenny Stills criticized Jay-Z for "choosing to speak for the people, [as if] he had spoken to the people," Dolphins head coach Brian Flores reportedly had his team play eight straight Jay-Z songs to open up practice.

Maybe it's easy to forget due to the narrative being hijacked by critics, but Kaepernick was never protesting the NFL. He was protesting police brutality and racial injustice, and for good reason: Young black men in America are now more than twice as likely to get killed by police than their white peers, according to a recent study. Clearly, this stuff is bigger than football. What remains to be seen is how Roc Nation's collaborations with the NFL will address these systemic issues, and actually help bring us past the time for kneeling. As it stands, the deal feels like the NFL attempting to invalidate Kaepernick's sacrifice, without extending him the courtesy of a seat at the table. And its success hinges on Jay's ability to leverage black cultural capital for the benefit of a league that has spent the last three years publicly devaluing it.

At one point during last week's press conference, Jay-Z turned the questions on the reporters in the room, asking several of them: "Do you know what the issue is?" It was a rhetorical question, meant to highlight his belief that Kaepernick's protest has already done the job of highlighting what's at stake. But the real question is whether Jay-Z truly understands the issue. After receiving pointed criticism from Harry Belafonte for a lack of social responsibility several years ago, Jay's done admirable work pushing for criminal justice reform, producing documentaries on Trayvon Martin and Kalief Browder, and bankrolling legal defenses for Meek Mill's probation case and 21 Savage's immigration case. But he's also been known to oversimplify the ways that money, power and racism intersect to marginalize Americans who look like him.

This is the same black billionaire, after all, who encouraged a concert hall full of his own skinfolk to, "Gentrify your own hood / Before these people do." The freestyle was meant to pay homage to Nipsey Hussle's economic revitalization efforts in South Central Los Angeles. But it failed to contextualize how property values and racial privilege remain tethered together in ways that overwhelmingly leave black folks displaced and erased in the process. Nor did it mention his own previous role in that same erasure: The 1% minority ownership stake he held in the Brooklyn Nets helped pacify concerns about the future economic impact of Barclays Center, a development that has helped gentrification creep into Biggie Smalls' old hood just a few blocks away.

Despite the criticism, there's still room for the Roc Nation / NFL initiative to do impressive work. The current fallout is largely about optics rather than execution. And Jay does have a history of shaky rollouts: Remember the live-streamed Tidal launch, anyone? His streaming service has not only survived alongside big boys Spotify and Apple, it's built up its own brand loyalty by catering to an urban demographic. (As a longtime subscriber, I should know.)

Only in black America are entertainment moguls tasked with being as astute in the political arena as they are in concert arenas. Every individual decision a black celebrity makes is weighted with the responsibility of representation. There's a long history in this country of black artists being used to quell protests or co-opt movements; the question is whether Jay-Z fully grasps what's at stake. You can't be critical of the status quo — and the NFL definitely represents the status quo in this country — if you're working to uplift it. The new deal shouldn't let the NFL off the hook for mishandling Kaepernick, and Roc Nation shouldn't be taken as a proxy for the people, even if its work does ultimately benefit the people. It's clear that Jay-Z knows his worth, but hip-hop's first billionaire must learn to wield his power in ways that don't undermine the efforts of activists putting in ground work.

If you haven't seen The Mack in its entirety, the ending — spoiler alert — is a revelation. Despite competing worldviews about how to uplift the black community, Goldie and Olinka end up linking to defeat their common enemy: corrupt cops. Resolving the distance between capitalists and activists is easier to romanticize on the big screen, but the truth is hustlers, club owners and entertainers helped bankroll and bail out the leaders of the civil rights movement, too.

Instead of sitting with Roger Goodell at last week's press conference, Jay-Z should have been sitting with Colin Kaepernick. Even if their methods are different, we needed to see Jay working to reconcile the NFL's relationship with the player who spearheaded the fight for social justice on the field before working to repair the NFL's reputation off the field.

If the brothers gonna work it out, they've gotta stick it to The Man together.