Accessibility links
70 Mayors To Trump: Changes To SNAP Would Make More Children Hungry Mayors from 70 American cities send a letter to the Trump administration, saying a plan to push millions of people out of the federal food stamp program would punish some of the country's neediest. 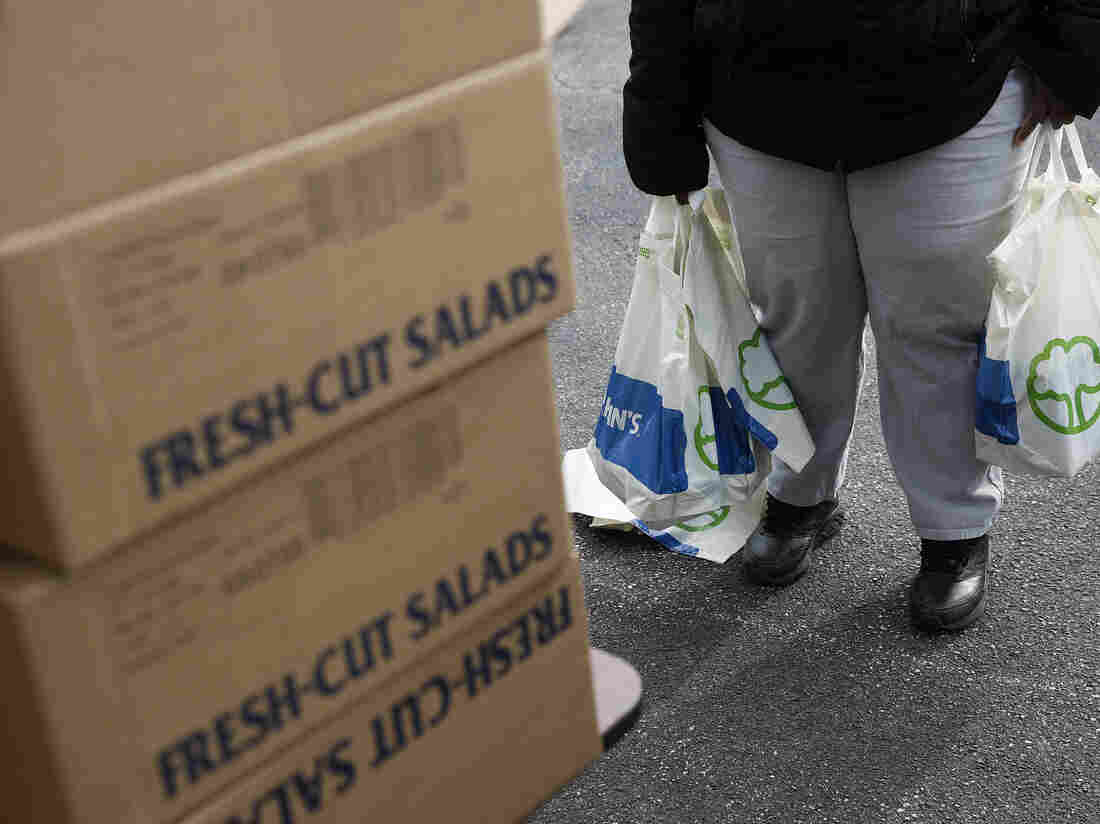 An FDA contract worker collects food and supplies from a food pantry in Baltimore. In the face of a Trump administration proposal that could cause 3 million people to lose federal food assistance, mayors from 70 cities are pushing back. Patrick Semansky/AP hide caption 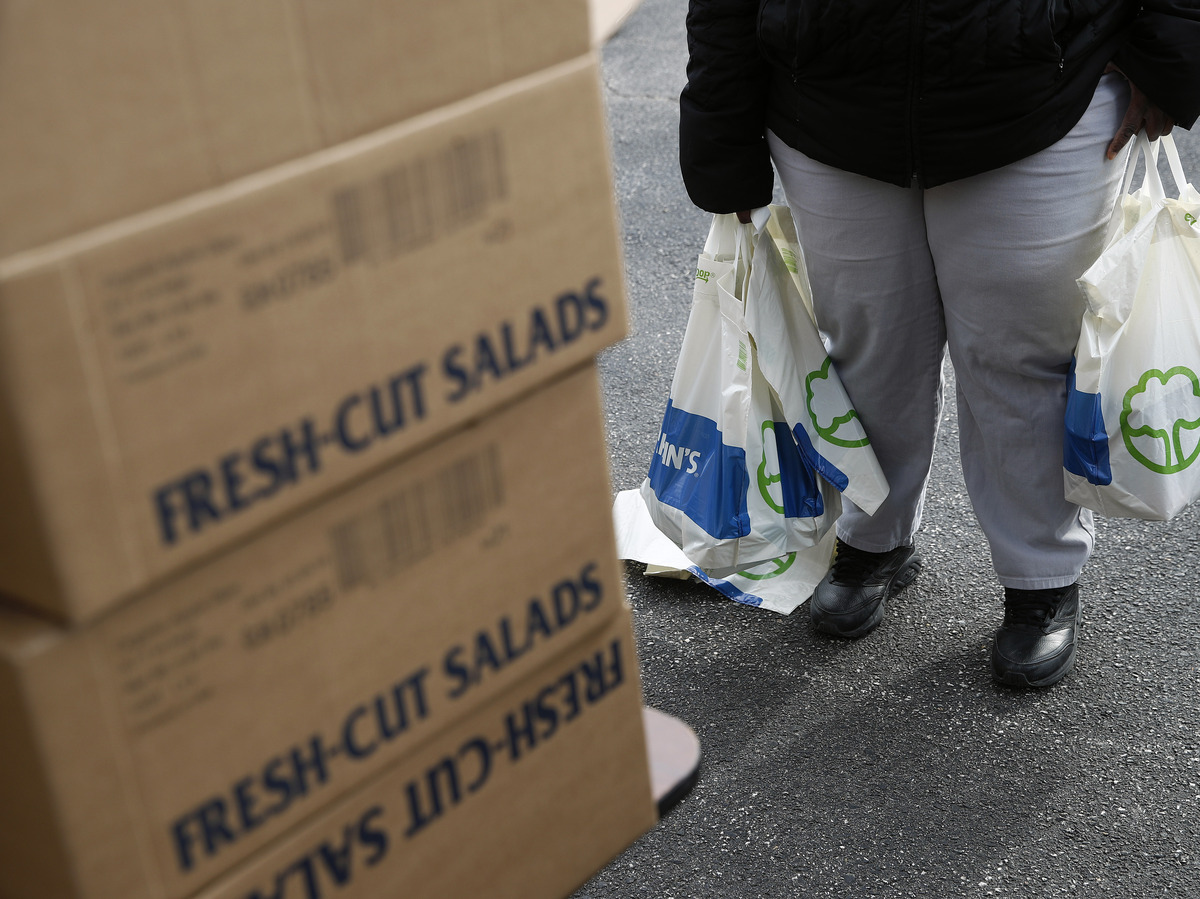 An FDA contract worker collects food and supplies from a food pantry in Baltimore. In the face of a Trump administration proposal that could cause 3 million people to lose federal food assistance, mayors from 70 cities are pushing back.

The Trump administration's proposal to push millions of people out of the federal food stamp program would punish some of the country's neediest, including children, seniors and people with disabilities, according to mayors of 70 American cities who have sent a letter to an administrator for the Supplemental Nutrition Assistance Program.

Under a new rule proposed in July by the Agriculture Department, more than 3 million people would lose their food assistance. The mayors say the move would also hurt their local and regional economies.

The change to SNAP is aimed at plugging what critics say is a loophole that allows states to give benefits to people whose savings and other assets the Trump administration says should make them ineligible for food stamps.

Anti-poverty groups view the shift as part of a broader push by the Trump administration to peel people off government assistance. Republicans who back the move say the new rules are needed to curb abuse of federal safety net programs.

Through the change, the Trump administration aims to cut spending by some $2.5 billion a year. Agriculture Secretary Sonny Perdue has pledged the plan will also preserve "the integrity of the program." But dozens of mayors counter that shaking up the eligibility requirements will exact a toll on some of the nation's most vulnerable people.

"This proposal will put children's health and development at risk by removing their access to healthy school meals; and harm our economy by reducing the amount of SNAP dollars available to spur regional and local economic activity," wrote the city leaders, in a letter sent from the U.S. Conference of Mayors.

The mostly Democratic mayors who signed the letter come from around the country, from Fremont, Calif., to Houston and from Edina, Minn., to Philadelphia.

"Our nation cannot remain globally competitive if our children do not have enough to eat; if our citizens do not have access to affordable health care; if housing and other basic needs are priced out of reach; and if adults who are willing and able to work cannot find jobs that will help them support their families," the mayors wrote.

The majority of the people who receive SNAP are children, the elderly or people who struggle with a disability. Government statistics show that the average monthly benefit per person is $135 a month.

Federal food assistance is a pathway out of desperate circumstances, the mayors argue.

"SNAP is not only a critical resource in the fight against hunger and food insecurity, but also lifts people out of poverty," their letter states.

Since the new federal rule has been open to public comment, more than 4,000 people have weighed in on the proposal, with many strongly opposing the Trump administration's move.

"It's horrifying to think that millions of people will not have food stamps! I encourage the American government to act for the people that need a hand up from desperate situations," wrote Kala Nyx.

"I am a 55 year old white male from rural Texas," wrote Johnny Dotson, who said he has known many families who have depended on SNAP. "You should be ashamed of yourselves if you believe it is ok to make children go hungry for ANY reason. You may think there will be so few children negatively affected it would be worth the cost, but you are wrong."

Others, like Joal Devendorf, embraced the Trump administration's proposed move.

"We should close loopholes such as the SNAP loophole. Temporary Assistance is fine; ongoing dependence is not," he wrote.

The mayors, meanwhile, are fretting about how the overhaul to food assistance will impact their regions' local economies, saying those who receive benefits spend more money in their communities, as part of a "multiplier effect" that boosts overall economic activity, including job creation.

Citing the USDA's own statistics, the mayors wrote, "during times of economic downturn, every additional $5 dollars in SNAP benefits generates up to $9 dollars of economic activity."

The Agriculture Department did not immediately respond to a request for comment. The department can move forward with the new rule in about a month, after the 60-day public comment period ends on Sept. 23.