Accessibility links
Review: 'Invader Zim: Enter the Florpus' - Earth Is Doomed, Sort Of Eighteen years after the short-lived series premiered, Invader Zim is back with a one-off special that lacks the edge of the show's best episodes, but recalls what made it so fun. 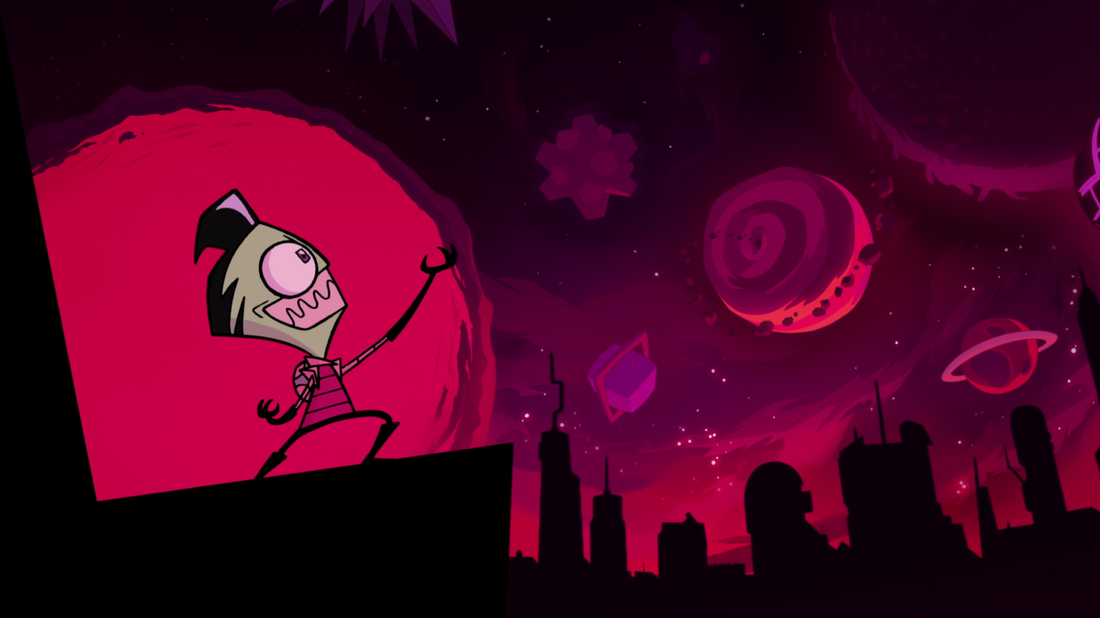 Our favorite incompetent invader is back in Invader Zim: Enter the Florpus. Netflix hide caption 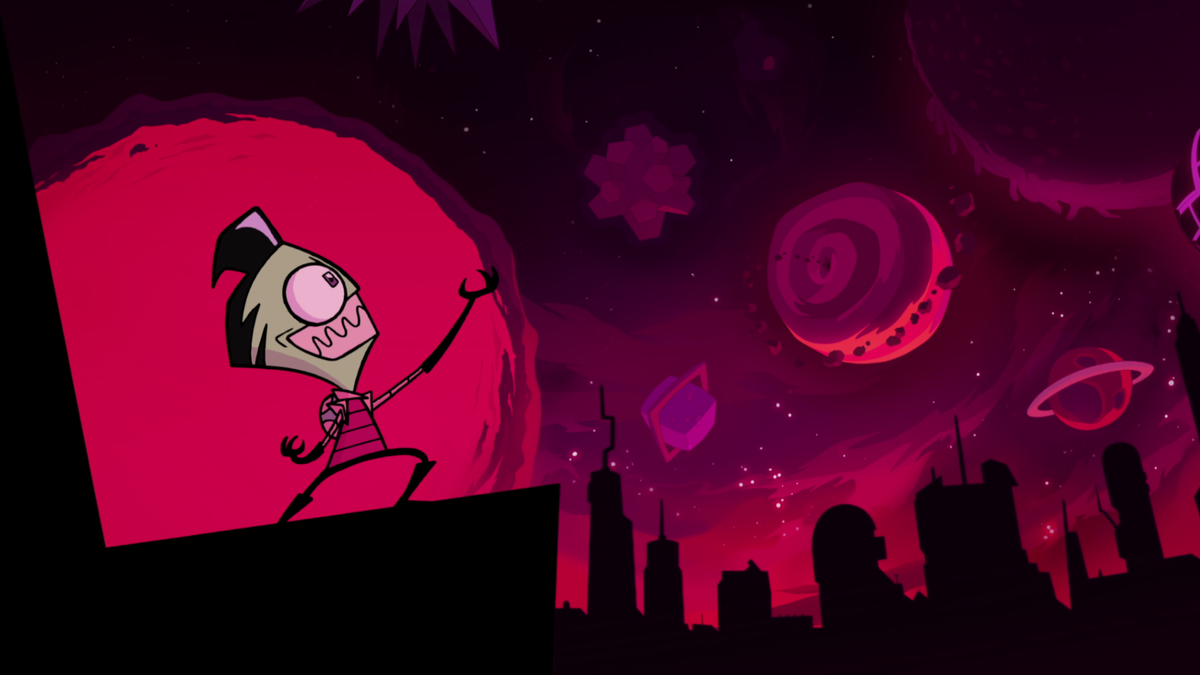 Our favorite incompetent invader is back in Invader Zim: Enter the Florpus.

Ask people which episode of Invader Zim they most remember, and it won't take long before someone brings up "Dark Harvest." In it, Zim — a green alien intent on destroying the human race — sets out to harvest his classmates' organs.

His reason is straightforward: He believes that the more organs he harbors in his body, the more human he'll appear to his classmates. So he begins swapping his classmate's internal organs with inanimate objects and absorbing their hearts, spleens, kidneys etc. At the episode's conclusion, Zim has grown huge on the various anatomical bits of his classmates. The school nurse, removing a thermometer from Zim's mouth, proclaims, "Why, you're one of the healthiest children I've ever seen. And such plentiful organs!"

Invader Zim: Enter the Florpus, a one-hour special now on Netflix, marks the return of the celebrated Nickelodeon animated series. Several Nicktoons have seen similar revivals over the past few years. (A Rocko's Modern Life special popped up on Netflix just last week, in fact.) But none of those shows were as weird, obtuse — and as controversial — as Invader Zim.

Created by Jhonen Vasquez in 2001, Zim shared a premiere date with The Fairly Oddparents. That series survived for ten seasons, but Zim was cancelled after only two. Over its brief run, Invader Zim earned a reputation for challenging notions of what made for acceptable content on a children's television network. And it was that very fact that drew an audience older than the one it was originally aimed at — "edgy" teens who discovered the show years later, via DVD sets (and — in no small measure — through Hot Topic merch). On the back of this phenomenon, the show is now widely — and wrongly, I think — remembered primarily for trading in shock value, instead of for the quality of its writing.

But Invader Zim: Enter the Florpus serves as a excellent reminder of why the series holds such a special place in the Nicktoon canon. It's weird, smart and bracingly unsentimental. Vasquez assured fans that Florpus was not a radical reinvention of the series — that what we were getting was bound to be just "More Zim!" That's mostly true, and the series doesn't try to comment on contemporary ills in the way the new Rocko's Modern Life reboot does. The characters, locales, and core themes are largely unchanged. And while a bit of the edge from the original run seems dulled, there's still a special pleasure in being thrown right back in the midst of a familiar chaos.

Invader Zim: Enter the Florpus occurs an undisclosed amount of time after the original series has ended. Zim is still out to destroy the human race by blending in with them, but he hasn't been seen for some time. Dib, a teen determined to expose Zim as the evil alien he knows him to be, has grown obsessed with Zim's disappearance. He's gained a bit of weight; his eyes are crusty. He's been waiting for Zim for so long, he's fused to his chair.

Zim returns, of course, and we're vaulted back into the premise familiar to fans of the old series: Zim yells a lot and tries to destroy Earth. The success of that premise is less about any suspense that Zim will actually achieve his goal (his incompetence assures that will not be the case); it's more about seeing whatever zany scheme Zim devises to mount the attempt.

Stephen Hillenburg, Creator Of 'SpongeBob SquarePants,' Has Died At 57

Just as before, the humans of Earth remain hopelessly unaware of the threats around them. They are gross caricatures of human beings: They drink soda cans labeled "poop," eat pizza that has been regurgitated by a vile corporate pig mascot, and in Enter The Florpus, they buy up a piece of tech (that resembles an Apple watch) designed specifically to destroy them. "All this time trying to subjugate the humans and all I had to do was charge them for it!" exclaims Zim.

Tonally, Enter The Florpus feels less jarring and nihilistic than the series' most iconic episodes. It's particularly invested in showing us the fractured relationship between Dib and his father, a brilliant mad-scientist-type named Professor Membrane. The new special also gives Dib's sister Gaz, who read as a one-note symbol of teen ambivalence in the original run, more of a multidimensional personality.

All of this is admirable, but it's strange seeing a series known for its grim indifference and mordant satire trading in things like sentimentality and ... actual character development. Creator Vasquez told The AV Club that, with Enter the Florpus, he was concerned with "actually telling a story instead of stringing together a bunch of madness."

A fine goal, and to some extent Enter the Florpus achieves it. But that notion that the original series amounted only to random bits of insanity sells the original run of Invader Zim short.

That madness was the story. Yes, there was lots of yelling and gleefully gratuitous violence, and it's those things that undoubtedly made it such a hit with the Hot Topic kids. But it wasn't the mayhem that made the show's comedy so singular, it was the show's utter lack of cheap emotion, its grim nihilism, it's vision of Earth as a place of all-consuming alienation.

Take that "Dark Harvest" episode mentioned above. On the surface, you've got the simple shock of a TV-Y7 television show depicting the removal of a child's organs. A layer below that, however, rests a social critique I'm hesitant to call satire, but will happily label a deep-seated discomfort with American institutions.

Consider: Zim's teacher lectures his students about how the nursery rhyme "Ring around the Rosie" depicts death in the time of the Bubonic Plague. The hall pass is a tracking device that snaps around student's necks. The school's hallways are dirty and congested and filled with artificial light; they resemble a prison. The cafeteria meal of the day is "mayonnaise and corn." Everything, everywhere, feels like a sardonic critique.

Strangely, it's Vasquez' insistence on Enter the Florpus feeling so similar to its original episodes that might be its most radical gesture. To suggest that Invader Zim's distrust of American institutions feels more chillingly relevant now than it did in the early '00s may not seem shocking, but it's no less true. In that same interview, Vasquez told The AV Club that the "big gag" of the show has always stayed the same. "I just like the idea of highly-advanced beings resorting to childish behavior, regardless of the technology that they wield," he said. "As powerful as you are, you're still just a kid lobbing explosives at one another." At least that much remains just as true, almost 20 years later.

The one thing that has changed is that Enter the Florpus lives on Netflix, not basic cable. One big reason Invader Zim seemed so radical was that you knew that any kid in America might stumble across it.

But Netflix is a wholly different universe. One far more crowded with content that's competing for attention (and Netflix's comparatively limited attempts at promotion). That means this new Zim special will likely be enjoyed by longtime fans of the show most, as opposed to a new generation of kids. But that's okay – for those of us who've been missing the show's sarcastic bite, it feels good to have our cynical friend around again, even if only for an hour.

A previous version of this story mistakenly referred to two characters as Gab and Dr. Membrane. Their names are Gaz and Professor Membrane.