Accessibility links
Review: 'The World Doesn't Require You,' By Rion Amilcar Scott Rion Amilcar Scott's second story collection returns readers to his fictional town of Cross River, Md., site of America's only successful slave uprising, and God is one of the best-known residents. 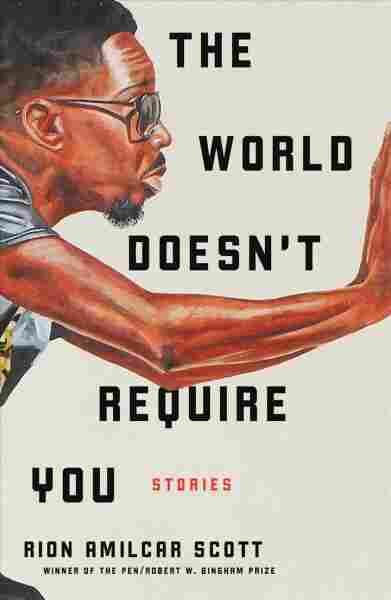 The World Doesn't Require You

New York is bigger, St. Augustine is older and Las Vegas draws more tourists, but it's undeniable that Cross River, Md., is one of the most fascinating cities in America. The town is known as the home of Freedman's University, the birthplace of Riverbeat music (made famous by beloved prodigy Phoenix Starr) and, of course, "the only successful slave uprising in this country — ever."

There's a reason, though, why you've likely never heard of Cross River — it exists only in the imagination of author Rion Amilcar Scott, who returns to the fictional town in his second short story collection, The World Doesn't Require You. Scott's 2016 debut, Insurrections, was a breakout hit for the Maryland author, and showcased his sprawling imagination and beautiful writing. His follow-up, filled with the same dark humor and exuberant risk-taking, is somehow even better.

The first story in the book introduces readers to one of Cross River's best-known residents: God. He doesn't stick around for long, however, taking his own life in the second paragraph, at which point the story begins to follow his youngest son, David Sherman, a street musician who lands in jail after he participates in an armed robbery that leaves his partner in crime dead.

Scott writes about the surreal and fantastic with a straight face, content to let the weirder elements of his stories to speak for themselves, and this technique lets his characters shine through.

When he gets out, he's determined to rededicate his life to music, and lands a gig performing in "the Church of the Ever-Loving Christ," where his brother, Christ III, is pastor. It's there that he pioneers a jazz-inflected sound that scandalizes his brother, but electrifies the congregation: "The music made the people dance sexy, lusty dances. Free-spirited movements that drew attention to their thrusting, shaking nether regions." The story is delightful, an intelligent and fun introduction to the world-in-a-town that Scott has created.

From there, it gets both darker and funnier. In the book's second story, a young man named Darius gets a visit from a childhood friend, Tyrone, a graduate student in cultural studies who's eager to share his dissertation. The paper focuses on a popular childhood game sometimes called "doorbell ditching," in which kids knock on a stranger's door and hide or run away; Tyrone insists that the game "was one of the very first things our ancestors did to spark the Great Insurrection."

Darius agrees to accompany his friend on a few rounds of the game, and soon gets addicted to it: "What was once unknown to me now seemed obvious. I hadn't just been playing a childhood game. I was participating in a tradition of rebellion, the same tradition of rebellion that [led] to the abolition of slavery, the weekend and the forty-hour work week." When the two bring the pranks to Cross River's mostly white neighboring town, though, the result is disastrous — it's a dark and hilarious story that satirizes both racism and academia.

The stories in The World Doesn't Require You cross genres, with influences from science fiction ("Mercury in Retrograde"), fantasy ("Numbers") and straight-up horror (the unforgettably chilling "Rolling in My Six-Fo ..."). Scott writes about the surreal and fantastic with a straight face, content to let the weirder elements of his stories to speak for themselves, and this technique lets his characters shine through — there's a real sense of humanity in each story, even the two in which the main character is a robot.

Scott's book ends with a firecracker of a novella, "Special Topics in Loneliness Studies." It's told from the point of view of Simeon Reece, who's kind of a professor at Freedman's University — which is to say, he's no longer employed there, but still teaches classes nonetheless, unbeknownst to the school's higher-ups. ("Somehow I always had students, even though my courses weren't officially offered by the university. No idea where they came from. I just set up shop every semester in an empty classroom and start lecturing.")

The book is less a collection of short stories than it is an ethereal atlas of a world that's both wholly original and disturbingly familiar.

Reece's ultimate goal is to destroy academia as the world knows it, replacing it with "a whole army of ghost professors teaching ghost courses and our alternatively educated students would spread across the globe, undermining all our dead zombie institutions ... that dulled our senses." He finds an unwitting pawn to help realize his plan: Reginald Chambers, an English professor with a troubled home life who's been in hot water with the administration ever since he was caught viewing lesbian pornography on a school computer. The novella's ending is at once funny and wistful; it highlights Scott's sense of compassion without sacrificing his mordant edge.

Like all of the stories in The World Doesn't Require You, it's powerful, unexpected and dreamy. The book is less a collection of short stories than it is an ethereal atlas of a world that's both wholly original and disturbingly familiar; Scott proves to be immensely talented at conjuring an alternate reality that looks like an amplified version of our own. Bizarre, tender and brilliantly imagined, The World Doesn't Require You isn't just one of the most inventive books of the year, it's also one of the best.