Accessibility links
As Texas Suburbs Diversify, Democrats See An Opportunity For 2020 As Republican retirements stack up, Democrats are bullish about gains in Texas, with rapid demographic shifts among Hispanics and Asians. Plus, a backlash against President Trump. 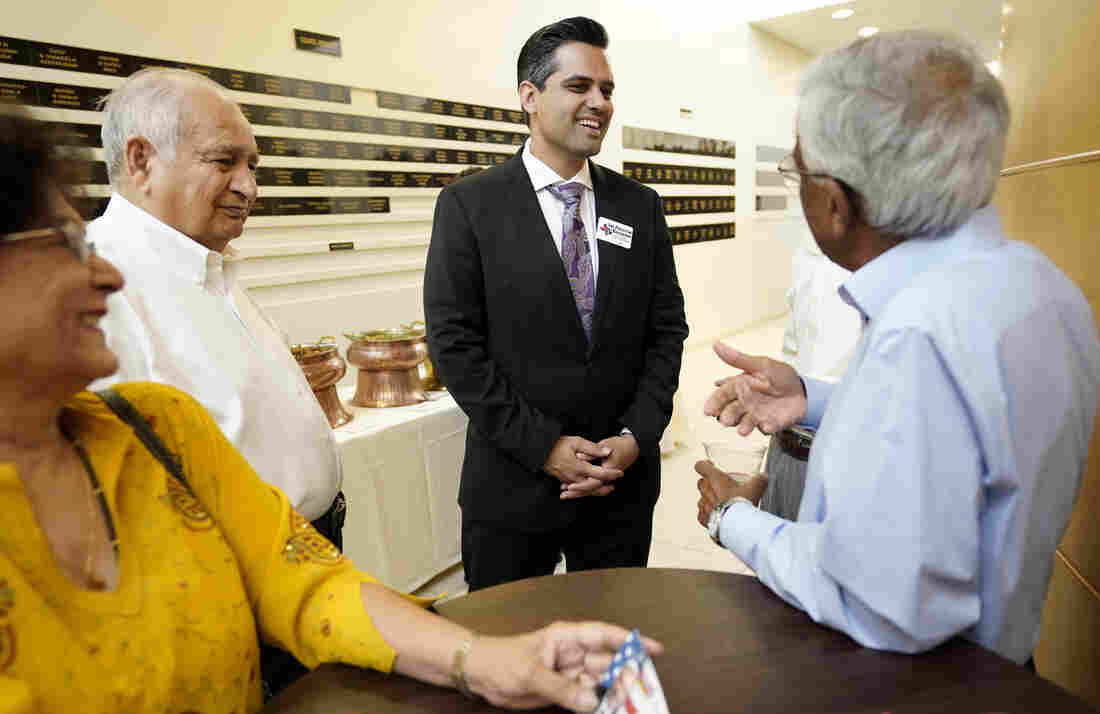 Democratic congressional candidate Sri Kulkarni listens to supporters attending a fundraiser in Houston. In his last campaign in 2018, he came within 5 points of GOP Rep. Pete Olsen, who is retiring in 2020. David J. Phillip/AP hide caption 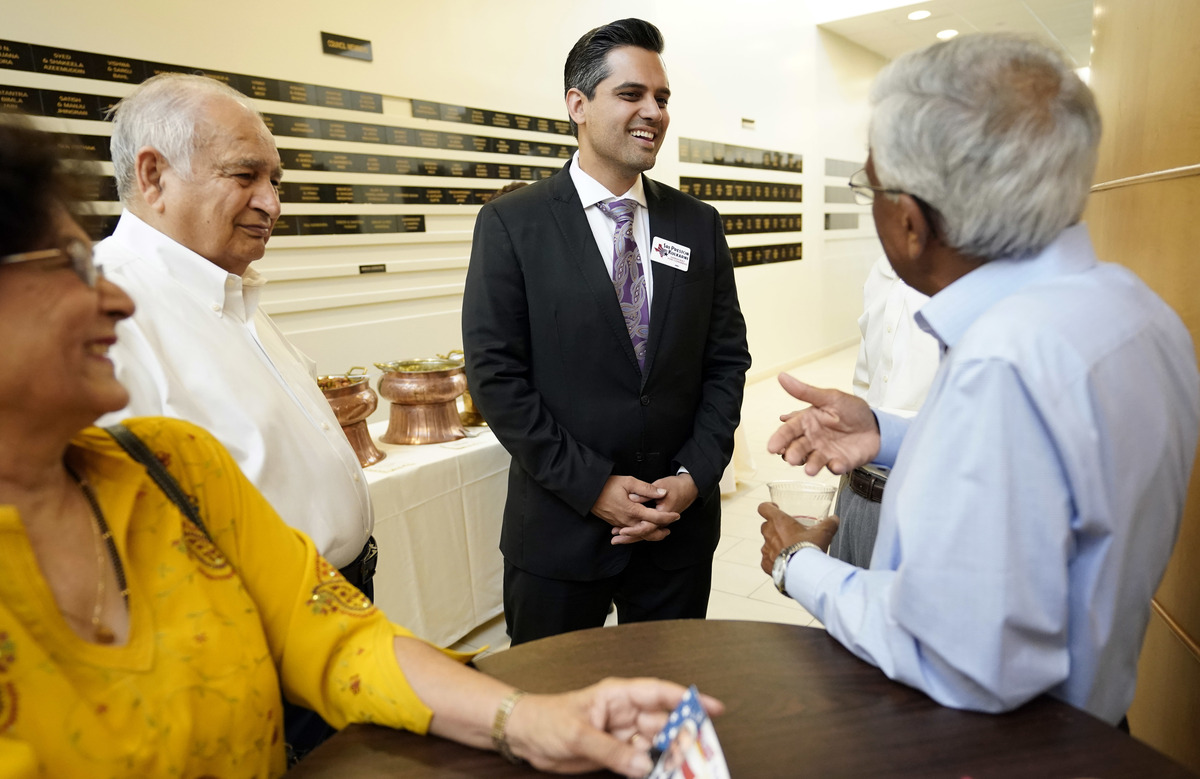 Democratic congressional candidate Sri Kulkarni listens to supporters attending a fundraiser in Houston. In his last campaign in 2018, he came within 5 points of GOP Rep. Pete Olsen, who is retiring in 2020.

Looking around the inaugural meeting of the Fort Bend County Young Democrats, there's clear evidence that the face of Texas is changing.

About 60 young adults — almost all minorities — are crammed into a side room of a bubble tea cafe in the Houston suburbs on a steamy August evening. As local and congressional candidates make their pitch to the new group, there are roaring cheers — and a sense of optimism that wasn't here even a decade ago.

Ali Hasanali, a 30-year-old assistant district attorney, has been involved in local politics in his hometown since 2010, and he remembers a much lonelier scenario back then.

"My first Democratic Party meeting, there was maybe 15 of us. I was probably the youngest person there by three decades. I was definitely the only Asian-American in the room," Hasanali said. "We didn't have enough people to run for office, let alone participate in getting people out to vote."

But aided by both rapid demographic shifts and a backlash to President Trump that's permeating many suburban areas, this area is quickly changing and becoming ripe for Democrats.

In 2018, Democrats flipped two congressional seats in Texas. Now, they're eyeing at least six more GOP-held districts that may be vulnerable, including the 22nd District, which is anchored in Fort Bend County, along with parts of Harris and Brazoria counties.

The Democratic Congressional Campaign Committee has already opened an office in Texas with field staff to help them toward that task. Republican worries are mounting here too — and have grown just over the past month after four GOP incumbents announced they won't run again in 2020.

Democrats see backlash to Trump as a 'silver lining'

Rice University Political Science Professor Mark Jones says this area in the southwest Houston suburbs and exurbs has seen major growth particularly among its Hispanic and Asian populations, and is on pace to become even more diverse given that most younger residents who have yet to turn 18 are minorities.

But over the past few years, even voting-age minorities who may not have been engaged are being spurred to register and vote.

"In Fort Bend County, we've seen Trump's unique ability to alienate Asian-American who in the past had voted Republican and Latinos who voted at much lower rates than Anglos," said Jones.

Republican strategist Brian Walsh, a former aide to Texas Sen. John Cornyn, says his party needs to be worried about diversifying areas like the 22nd district — and that Trump is hurting any efforts to reach out to these changing suburban districts.

"Texas exemplifies sort of a larger problem and conversation the Republican Party needs to have within itself not just looking ahead to 2020 but beyond as well," Walsh said. "So Republicans, if they want to continue to hold Texas, will need to look back and having a big tent philosophy which is not currently happening at the moment." 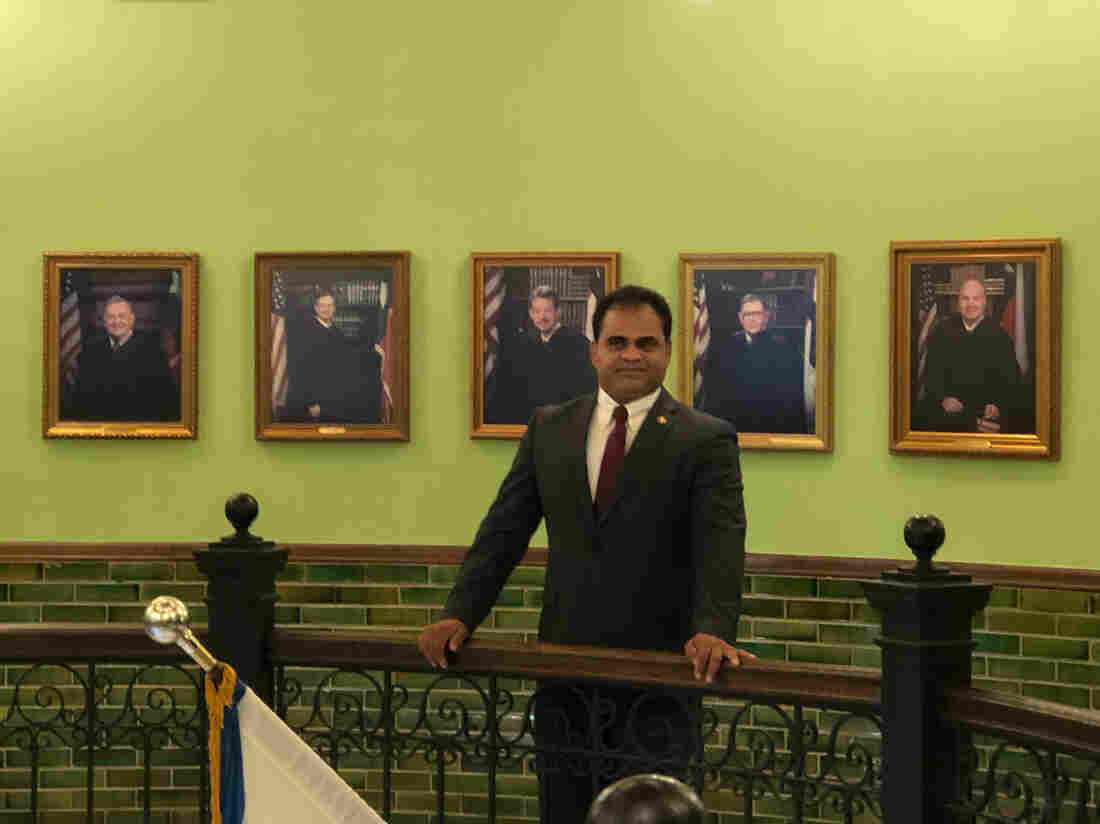 K.P. George, pictured in the historic Fort Bend County Courthouse in Richmond, Texas, stands before the photos of all the previous County Judges who preceded him in the office. The Indian immigrant is the first minority ever elected to the seat. Jessica Taylor/NPR hide caption 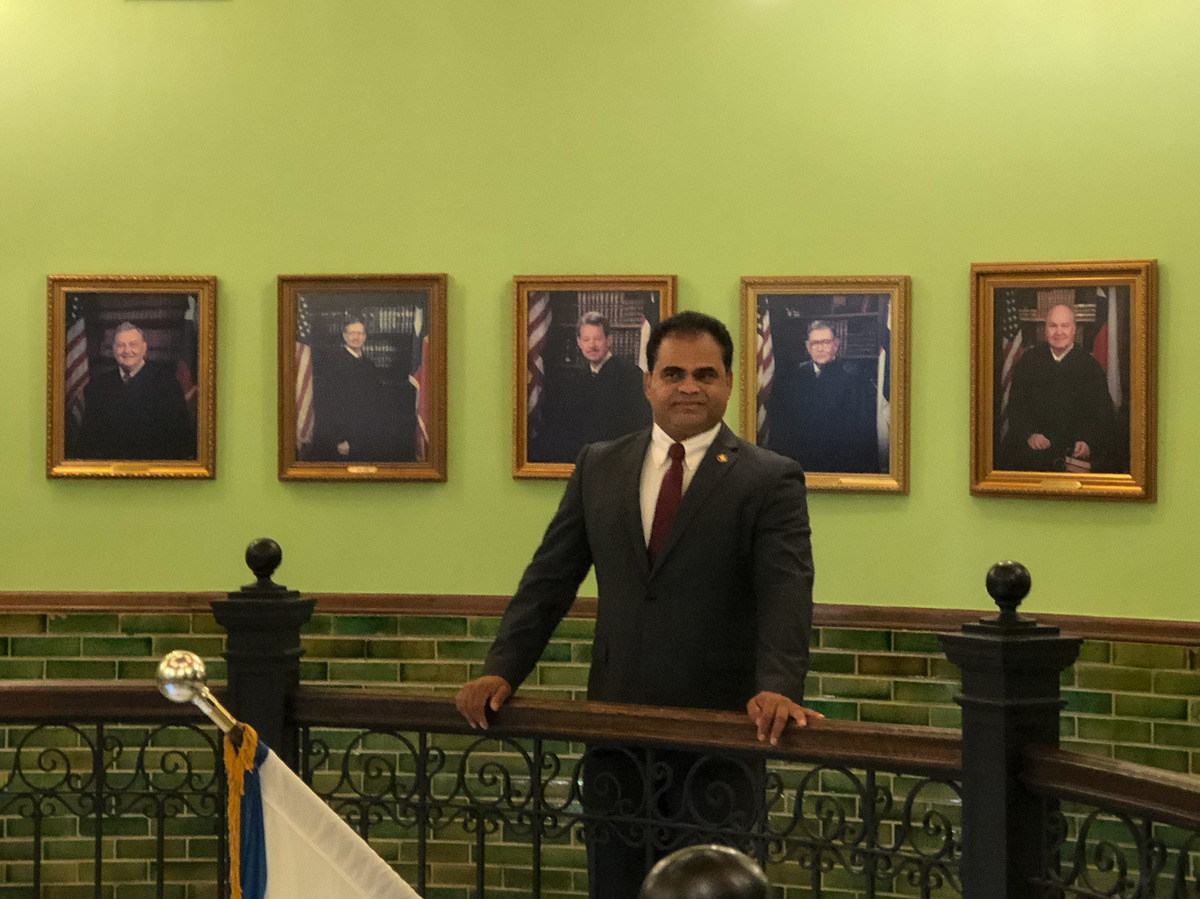 K.P. George, pictured in the historic Fort Bend County Courthouse in Richmond, Texas, stands before the photos of all the previous County Judges who preceded him in the office. The Indian immigrant is the first minority ever elected to the seat.

George grew up in poverty in a remote Indian village before coming to the U.S. in 1993. Last year, he became the first Democrat to win the top countywide position in nearly 25 years, and he's the first minority ever to hold the office. The county commission also flipped from GOP to Democratic control.

When Cynthia Ginyard took over the Fort Bend County Democratic Party in spring of 2016, she knew the party had to reach out beyond its traditional base of African-Americans like herself and some more liberal whites.

"We are every color, race, creed, religion. We make up the Democratic Party — but all of them were not always a part of or were welcomed or felt welcome to come and join," she said from the party's new permanent headquarters. 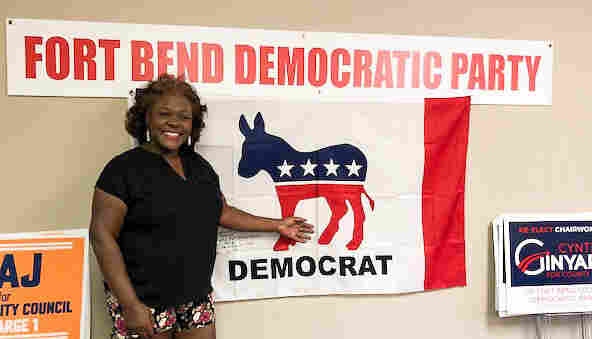 Cynthia Ginyard established a permanent headquarters in Sugar Land for the Fort Bend Democratic Party after she became chairwoman in 2016. Before, the county party only had a headquarters just before primaries and elections. Jessica Taylor/NPR hide caption 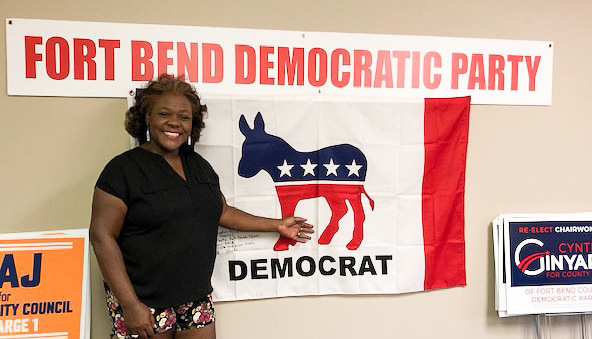 Cynthia Ginyard established a permanent headquarters in Sugar Land for the Fort Bend Democratic Party after she became chairwoman in 2016. Before, the county party only had a headquarters just before primaries and elections.

Like George, Ginyard says Trump has been a blessing in disguise because he's prodded people who may not vote to now become active.

"They always say that there is a silver lining behind every cloud. Well [Trump] is the silver lining in this black cloud he's brought to our country because he has energized this side of the party," Ginyard said.

But there's still more work to do, local Democrats are quick to point out. Their next big target is the 22nd congressional District. It went for Mitt Romney by 25 points in 2012, but in 2016 Trump only carried it by 8 points. And last month Republican Rep. Pete Olson announced he was retiring.

During his 2018 campaign against Olson, former foreign service officer Sri Preston Kulkarni tried to tap into those changing demographics, especially the 22nd's foreign born population, a quarter of the district. A key part of his strategy last year was reaching out to immigrants — often in their native languages — after realizing that almost three-quarters of those voters had never been contacted by a Democrat or a Republican.

Kulkarni came within five points of beating the GOP incumbent.

"I studied linguistics in college. I speak six language myself. They said, 'Don't bother with those voters because they don't vote.' I said, 'Maybe they don't vote because we don't bother.' And so we tried it, and we brought out more people than anybody had ever imagined," Kulkarni said.

According to numbers from Rice's Jones, the changing demographic shifts are significant. In 2010, 54% of the district's voting age population was Anglo. By 2019, it's dropped to 47%, with about 20% Latino, 17% Asian-American and 15% African-American. And Jones expects the upcoming Census next year to give an even clearer reflection of the monumental shifts.

Kulkarni himself personifies the changes at play in this part of Texas. His father was an Indian immigrant. His mother is actually a descendant of Sam Houston, the first president of the Republic of Texas. If elected in 2020, Kulkarni would not only be the first Asian-American to represent Texas, he'd be the first Hindu too.