Accessibility links
Julia Louis-Dreyfus On Selina Meyer, Ambition And 'SNL' Nominated for a ninth Emmy Award in acting, the star of Veep and Seinfeld talks about getting her first laugh, her rocky start at Saturday Night Live and the #MeToo movement. 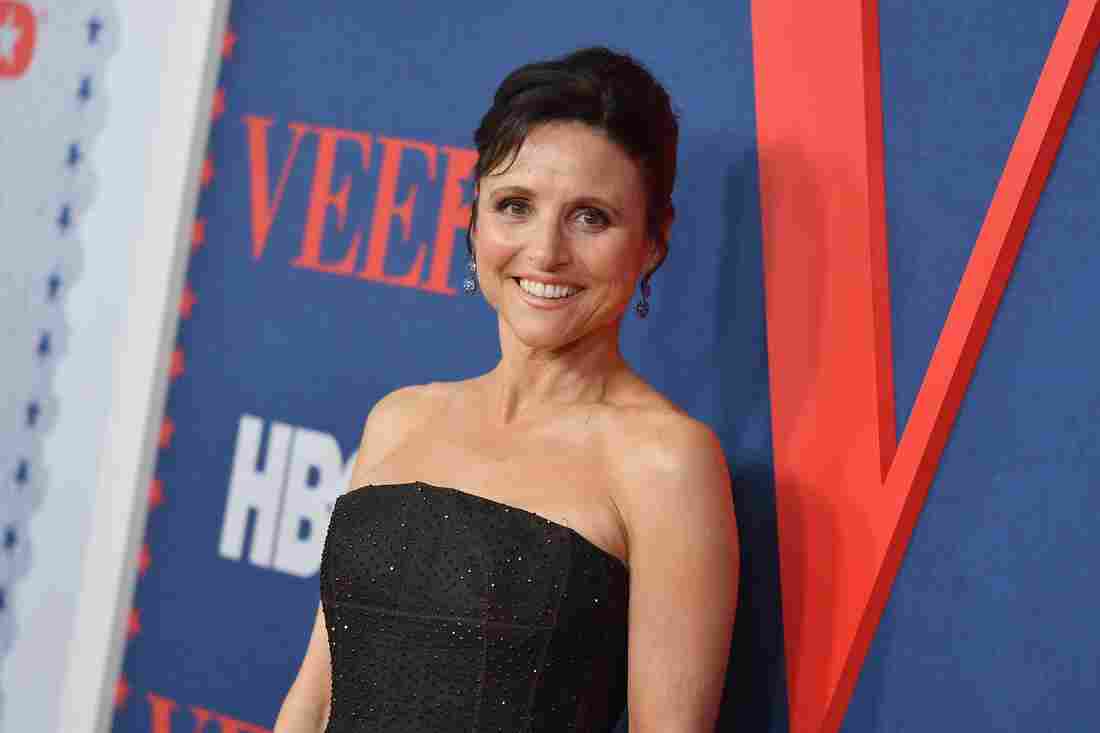 For her starring role as Vice President Selina Meyer in the seventh and final season of Veep, Julia Louis-Dreyfus recently received another Emmy Award nomination for outstanding lead actress in a comedy series. She won the award six years in a row from 2012-2017. Angela Weiss/AFP/Getty Images hide caption 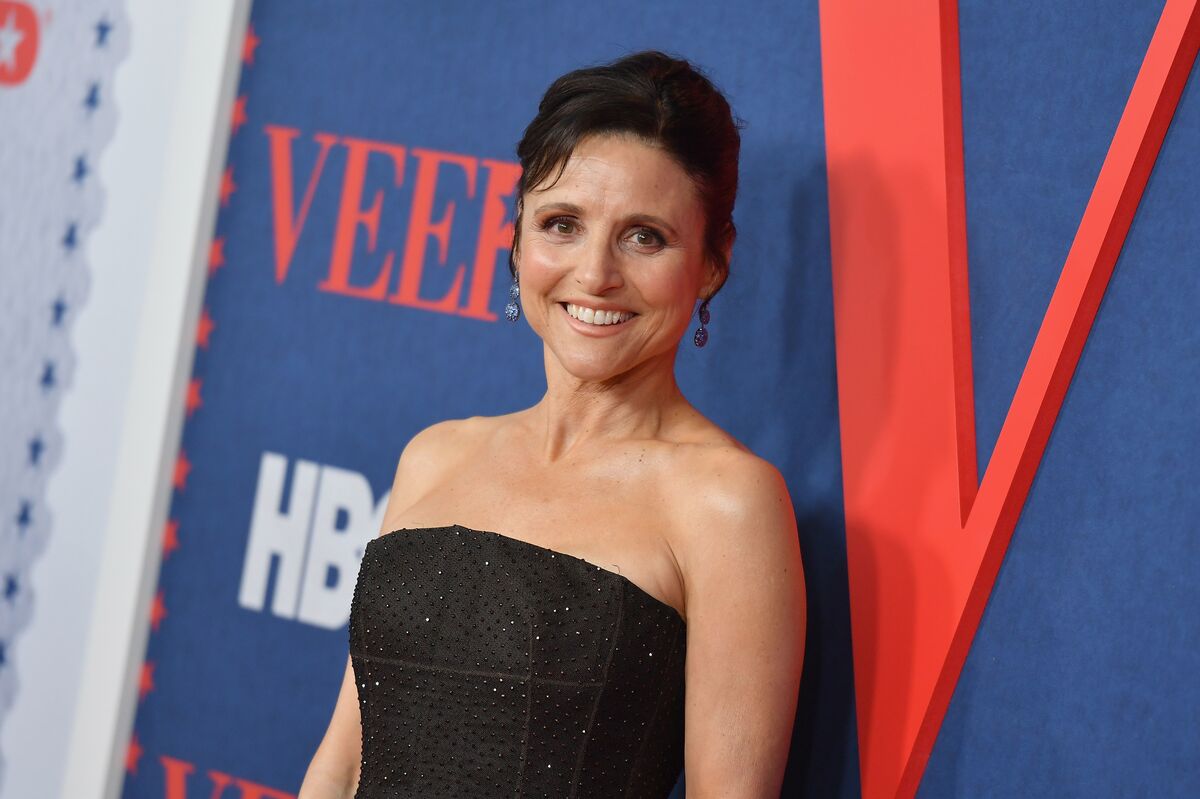 For her starring role as Vice President Selina Meyer in the seventh and final season of Veep, Julia Louis-Dreyfus recently received another Emmy Award nomination for outstanding lead actress in a comedy series. She won the award six years in a row from 2012-2017.

Julia Louis-Dreyfus remembers drawing her first laugh. The joke was performed for the benefit of her mother.

"I stuck some raisins up my nose when I was 3," she says. "Classic. Classic! ... And then we promptly went to the emergency room because I sucked them up into my brain and had to have them extracted."

Since then, Louis-Dreyfus has sharpened her act a bit. She was presented with the Mark Twain Prize for American Humor last year. And between playing Elaine on Seinfeld, Christine on The New Adventures of Old Christine, and Vice President Selina Meyer on Veep, she's won a record-tying eight Emmy Awards in acting. She's up for a ninth next month.

In an interview as part of an All Things Considered series on women in comedy, she talked about her start on Saturday Night Live (straight out of improv groups in Chicago), the #MeToo movement and whether she thinks she's "made it."

On joining the Saturday Night Live cast at age 21

[As a teenager in the '70s,] I had been the audience for Saturday Night Live. I mean, I was devoted to it. And I felt as if it spoke to my generation, and it was irreverent, in a way that nothing else on television was. So then, to be plucked from this particular situation in Chicago and to go to New York to do the show was a very heady experience, to say the least. ...

I'd been doing shows on campus at Northwestern [University] where everybody worked together and you built the sets and you did the lights and you acted in it and you link arms and "let's go after this!" Anyway, it was nothing like that. I was very, very green going into the SNL experience. And I learned really fast how to do live television in a very cutthroat kind of — I don't mean I "succeeded," but I learned. Because I had no idea how to perform on television. You know, I'd been on stage, and that's a different skill set. And I didn't know how to dial it down, I didn't know how to control my nerves; I mean, it was pretty terrifying.

On her experience as a woman on SNL

It was a little bit heartbreaking, truthfully, particularly as a woman there. There were very few women, and they did definitely at that period of time got short shrift. And you know, there were a lot of drugs, and I was very naive about even that. I couldn't really identify when somebody was very coked up on something, even though their script was 35 pages long and they were laughing hysterically about something that I didn't really pick up on. And so it was not a raucous good time. ...

There was a culture in which the writers, who are mainly male, would only write the really meaty, funny stuff for other male actors. And the women — and again, there are exceptions to this of course, because there were moments in which we as women on the show (myself, Mary Gross, Robin Duke), we all got moments to shine. But they were not as frequent as the men. You just had to really, really — it was like banging your head against the wall to get anybody to pay attention, to write material for you.

On a line of dialogue from the latest season of Veep

I'll tell you something about justice, Senator. When I was coming up as a lawyer if I didn't have to remind everyone I was a woman every 10 seconds because they never let me forget it. I smiled all through the casual grabbing of my behind and all the secret meetings on the golf course that I wasn't invited to. So how about giving a little thanks to the women like me who built the ladder that you use to get up onto your soapbox? How 'bout for once in your life, you stop whining, you stop complaining and just man up?

Every time I played [Selina Meyer] even at her most heinous, I had to find a way in to make that seem truthful. You know, this is a woman who has been — she's been in battle a long time, but she is, without really realizing it, a victim of a male-dominated culture, because she herself is a woman-hating woman and does not think well of her sex. So that's why I was so pleased when we were able to come up with that whole idea of "man up" because ... it's so layered in terms of its messaging.

On reflecting back on "#MeToo-type moments"

It's made me angry. It's made me frustrated, and it's fueled me. ... I just want to do my work well. I guess I'm fueled by ambition. And I want to have a good time while I'm doing it. Otherwise, what the hell's the point of life, you know? For me. I just want to play with people that I really enjoy, men and women. I really like men, by the way — well-behaved men. I'm a fan. ... I know a lot of well-behaved men, yeah, sure. I know some ill-behaved men too, but ... they're behind me now.

No, I don't think I've made it. I keep thinking about what will be my next challenge. And I like that. But I don't think of that as a negative answer, FYI. ... Does it get better? And I would say, well, the answer to that is: yeah. You know, keep pounding away at it and the actual pounding can reap rewards, you know? It doesn't mean you won't fail.

On the mixture of anxiety and ambition

They work well together. They really, really do.

Bilal Qureshi, Art Silverman and Connor Donevan produced and edited this interview for broadcast. Patrick Jarenwattananon adapted it for the Web.