Accessibility links
Brazilian President Bolsonaro To Send Army To Combat Amazon Rainforest Fires Tens of thousands of fires have erupted in the Amazon so far this year — a huge spike over 2018 — and critics blame Bolsonaro's policies. He said Friday that protecting the rainforest is "our duty." 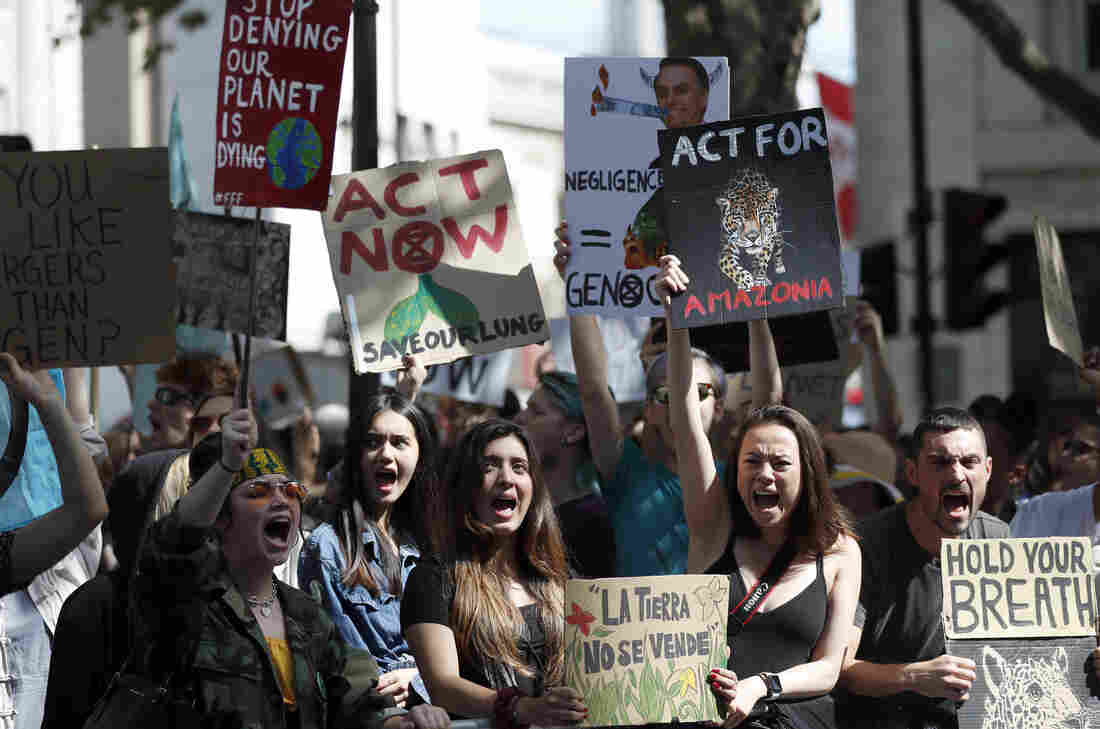 Extinction Rebellion activists protest outside the Brazilian Embassy in London on Friday, calling on President Jair Bolsonaro to act to protect the Amazon rainforest. The European Union is throwing its weight behind French President Emmanuel Macron's call to put the Amazon fires on the agenda of this weekend's G-7 summit of world leaders in France. Frank Augstein/AP hide caption 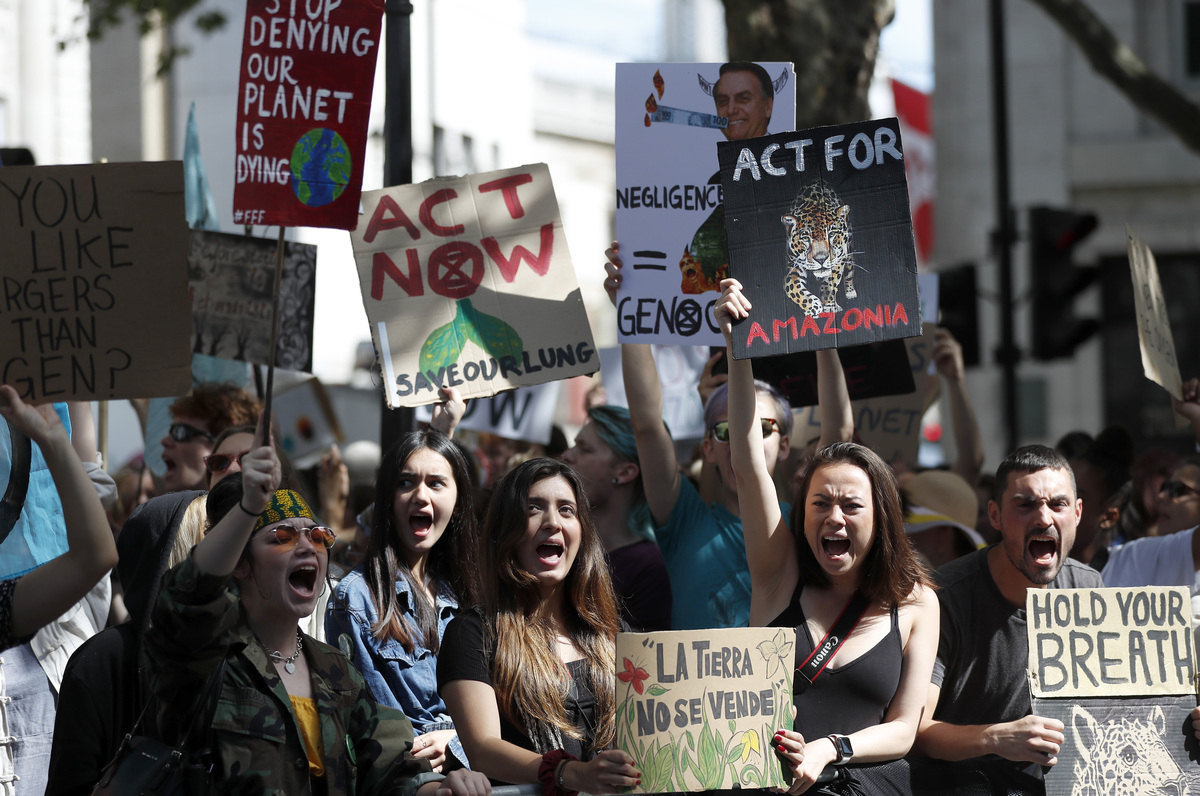 Extinction Rebellion activists protest outside the Brazilian Embassy in London on Friday, calling on President Jair Bolsonaro to act to protect the Amazon rainforest. The European Union is throwing its weight behind French President Emmanuel Macron's call to put the Amazon fires on the agenda of this weekend's G-7 summit of world leaders in France.

Brazilian President Jair Bolsonaro has responded to growing international condemnation over the fires sweeping through vast swaths of the Amazon rainforest by announcing that the army may be sent in to tackle them.

He said Friday that protecting the rainforest is "our duty" and he is acting to combat "criminal activities."

His comments mark a distinct shift away from his initial reaction to the crisis in which he downplayed the gravity of the situation but also caused widespread astonishment by suggesting that nongovernmental organizations may have set fires in the forest to discredit him.

2015 Explainer: Why Deforestation Happens (And Why It's Hard To Stop)

Faced with a spiraling environmental and political disaster, Bolsonaro met with his ministers Friday to discuss the fires, after government data revealed that there are far more of them within the forest this year than last.

Environmental and climate change experts say there is abundant evidence that the fires are mostly caused by humans — notably cattle ranchers — and that these illegal operators are being encouraged to clear land by the policies of Bolsonaro, who is eager for Brazil to exploit the Amazon's agricultural and mineral wealth.

Brazilians are gearing up for a weekend of protests in dozens of cities, highlighting the destruction being wrought in the rainforest and demanding that Bolsonaro's government takes decisive action to curb the fires. Satellite data from Brazil's National Institute of Space Research shows that there have been more than 74,000 fires this year, many of them in the Amazon. The demonstrations are "in defense of the Amazon and our future," according to organizers.

Over the past few days, international pressure has been steadily growing on Bolsonaro over his handling of the issue, especially from European leaders. A spokesman for Britain's newly installed prime minister, Boris Johnson, said he was "deeply concerned" about the fires and "the impact of the tragic loss of these precious habitats."

French President Emmanuel Macron plans to highlight the Amazon crisis at this weekend's G-7 summit in Biarritz, France, after sending out a tweet describing them as "an international crisis" and declaring: "Our house is burning. Literally. The Amazon rain forest — the lungs which produces 20% of the planet's oxygen — is on fire."

Macron raised the pressure on Brazil on Friday, issuing a statement accusing Bolsonaro of lying to him about his position on climate change and announcing that France has withdrawn its support for the Mercosur trade deal between the European Union and a South American bloc that includes Brazil. Irish Prime Minister Leo Varadkar warned that Ireland would pull out of the Mercosur agreement if Brazil did not take action to protect the rainforest, according to Reuters.

Bolsonaro has made clear that he considers the Amazon rainforest — 60% of which is in Brazil — to be an issue of national sovereignty, and he makes no secret of his resentment at what he deems to be foreign interference driven by a desire to hold back Brazilian agrobusiness from competing in international markets. 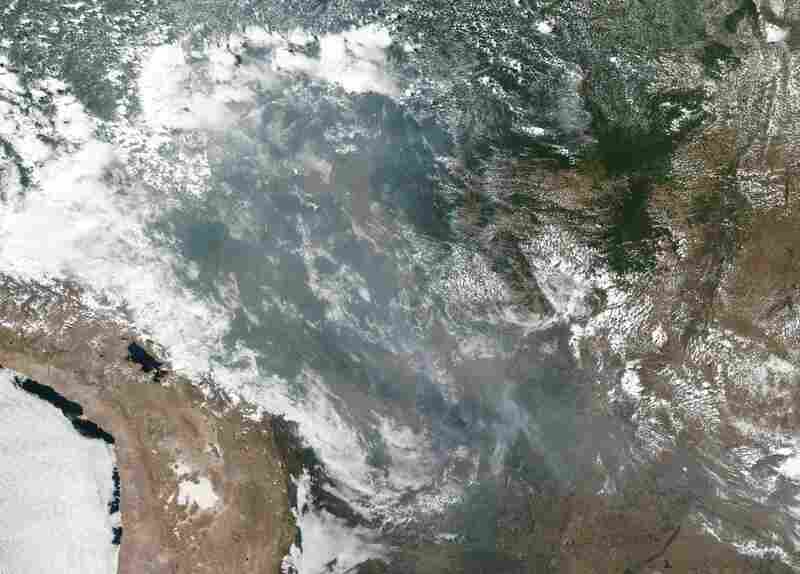 This satellite image provided by NASA shows the fires in Brazil on Aug. 20. AP hide caption 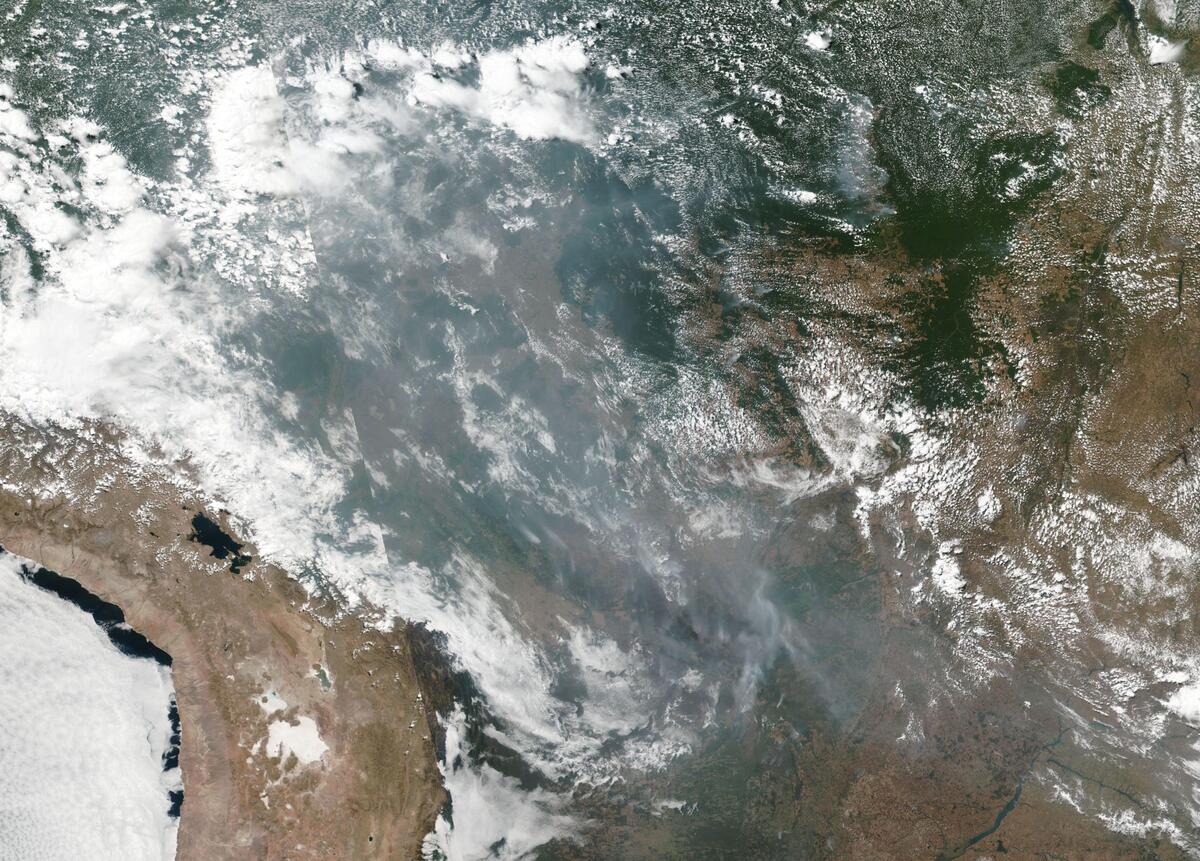 This satellite image provided by NASA shows the fires in Brazil on Aug. 20.

In recent weeks, he has alienated Germany and Norway, the two main contributors to the Amazon Fund, which supports forest preservation initiatives, prompting them to withhold tens of millions of dollars.

His approach has won applause from his supporters on the far right, but is also causing widespread fears among Brazilians that it is proving highly damaging to the country's international standing and may prompt a backlash that could impact exports.

"The image of the burning forest ignites public opinion and incinerates Brazil's reputation," wrote Ana Lucia Azevedo, a columnist for O Globo. She warns that the crisis is wrecking "the prestige and credibility" acquired by Brazil after 2005, when deforestation rates dipped sharply.

Another commentator, Vinicius Torrer Freire, wrote: "Within a few months, especially in recent weeks, he has knocked down two decades of improvements in Brazil's international image regarding the environment."

Bolsonaro argues that it is possible simultaneously to develop the Amazon and preserve the forest. His critics point to his record of relentlessly undermining institutions responsible for preserving and monitoring the Amazon.

Since taking office in January, he has severely weakened government environmental enforcement organizations, by cutting budgets and laying off staff. When Brazil's National Institute of Space Research released satellite data showing a sharp month-on-month rise in deforestation over last year, Bolsonaro dismissed this as "lies" and replaced the director with a military official.

His approach is causing deep concern among professionals fighting to protect the forest, who argue that these moves send the wrong message to illegal deforesters.

"They feel emboldened to carry out more deforestation," said Fluvio Mascarenhas, who works for the Chico Mendes Institute for the Conversation of Biodiversity — a government monitoring agency — in the western state of Acre.

In a recent interview with NPR, Mascarenhas expressed profound concern about the impact of Bolsonaro's policies.

"Every time you look at a satellite image of the forest, you see another little piece is missing," he said.