Accessibility links
Tope Folarin On 'A Particular Kind Of Black Man,' His First Novel The semi-autobiographical coming-of-age tale from the Nigerian-American writer, his debut novel, finds a child of African immigrants growing up in Utah. 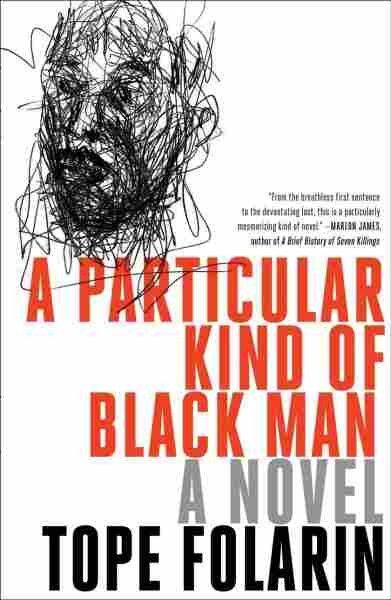 A Particular Kind of Black Man

When Tope Folarin sat down to write what would become his debut novel, he began by modeling its protagonist, Tunde, after his own life. Soon Tunde took on a life of his own.

"When writers used to talk about this, I thought it was mystical mumbo-jumbo — when they talk about characters doing their own thing," Folarin says an in interview. "That began to happen to me. And so I said: Well, this feels like a Tunde, and Tunde started doing all kinds of things that I didn't do and I wouldn't do. And so it kind of developed as a novel."

Like Folarin, Tunde grows up as the son of Nigerian immigrants in Utah, and attends the historically black Morehouse College in Atlanta. There are key differences between Tope Folarin the man and Tunde Akinola the character — though some emotional experiences remain the same.

"But the thing that unites us is the fact that we both have fragmented identities — or at least we did, and we're trying to come up with a way of melding these disparate pieces into a whole," Folarin says.

Folarin rose in the literary world after winning the Caine Prize for African Writing in 2013. He was shortlisted for the prize again in 2016.

The story that won the prize, "Miracle," takes place at an evangelical Nigerian church in Texas, where congregants have gathered to see a blind pastor's healing powers. The head of the prize committee called the story "a delightful and beautifully paced narrative, that is exquisitely observed and utterly compelling."

Now, Folarin has released that first novel, a coming-of-age story titled A Particular Kind of Black Man. Here's an early passage that sets up the narrative:

My father has told me many times that he's settled in Utah because he didn't want to be where anyone else was. His cousins and siblings had left Nigeria for Athens, London, Rome, New York City, and Houston. My father wanted to be an American, but he also craved isolation, so he decided he would travel to a city in America he knew nothing about.

He left Nigeria in 1979 after a school in Utah, Weber State University, offered him a place in its mechanical engineering program. His bride, my mother, accompanied him. They arrived in a country that bore a little resemblance to the country they expected. Dad, a devout fan of television shows like Gunsmoke and Bonanza, was disappointed when he discovered that cowboy hats were no longer in style, and he sadly stole his first American purchase — a brown ten-gallon hat that he bought during a layover in Houston — in a suitcase, and under his bed. Mom arrived in America expecting peace and love — she had fallen for the music of the Beatles and the Beach Boys as a high school student in Lagos while listening to the records that her businessman father brought back from his trips abroad. Though she had imagined in a country where love conquered all, where black people and white people live together in peace and harmony, Mom and Dad arrived, instead, in a place where there were no other black people for miles around, a place dominated by a religion they never heard of before

But this was America. And they were in love. They moved into a small apartment in Ogden, Utah, and started a family. I came first, in 1981, and my brother followed in 1983. Dad attended his classes during the day while mom took care of us at home. Occasionally she explored the city while pushing my brother and me along in a double stroller. Soon enough we were all walking hand in hand.

"It speaks, too, to ... American soft power," Folarin says. "[Tunde's parents have] been inundated and exposed to images and sounds from America for a very long time and they have this image of America in their minds. And so to confront what America actually is, is in some ways difficult for them, because it doesn't align with what they've created in their heads."

On Tunde's mother, who becomes mentally ill and leaves

For Caine Prize Winner, Writing Went From Phase To Way Of Life

For Caine Prize Winner, Writing Went From Phase To Way Of Life

I think family is incredibly important to Tunde ... just because it's the one connection he has to finding a sense of who he is. And when that begins to fall apart, that's when his psyche begins to fall apart in a really profound way. ... And without that maternal foundation, he spends much of the rest of the novel trying to figure out who he is without [it], because mothers obviously serve an incredibly important function in our lives. They are the people who bring us into the world, and in many families — not all families, but in many families — they are the people who shepherd us into the world as human beings. And so without that, he feels bereft; he's lost. ...

His memories of his mother are infected with pain, because he loves his mother desperately, but whenever he thinks of his mother he thinks of someone who hurt him because she was getting ill. And so I think as a result of that, his memories become corrupted. And for him, this is incredibly difficult because memories form the foundation of who we are. We are all, each of us, walking stories, and these stories are composed of elements from the past that we've braided together to create this coherent narrative. If your memories are corrupted because somebody who loved you also hurt you, it becomes difficult to have a foundation in the past.

So he discovers, as the novel progresses, that he cannot trust his memory. And that's one reason why he decides to literally script his future — to imagine a future for himself or [so that] someone like him can exist, basically.

On if Tunde's memory serves as a larger metaphor

One thousand percent. You know, absolutely, people of color in this country have memories about living in this country that are infected by the pain of slavery or Jim Crow or immigrating into this country and experiencing difficult times. ... The funny thing is that we go to school and learn this kind of history that isn't interrupted — it proceeds from pilgrims arriving to this country, to the founding of this country, to World War I, World War II, etc. But for many people, there are significant gaps in that history. And even those times, remember, are again infected with pain — those aren't memories that are easy to access or interact with. And so our history itself is riddled with things — and our history doesn't fully account for who we are as people and our culture as well. So it becomes difficult to interact with history sometimes for that reason.

On the book's title

I think part of it is that Tunde's father tells him that in order to be successful, you have to be a particular kind of black man, and Tunde comes to believe this. And his father really admires people like Sidney Poitier and other black men who are widely accepted by American society. He also mentions Bryant Gumbel, for example, as somebody else who's a touchstone for him. And Tunde obediently becomes this person.

And when he gets to college, when he arrives at Morehouse College, he begins to ask himself if that is who he actually is. He's successful; he's done well academically for himself. But he's never done the hard work of developing himself, right? He's always developed himself to please people who he may meet who might have opportunities for him. He's never done the hard work of saying: What makes me laugh, what makes me cry, what makes me a human being? And so he starts that very difficult process when he gets to Morehouse.

On Folarin's own experience asking himself "who he actually is"

For me that happened in grad school. I went to [the University of] Oxford for grad school, and for the first time in my life I had an opportunity to really think about myself and work on myself. Up to that point, I just wanted to be a successful student, and that was my entire focus in life. I got to Oxford and had swaths of time by myself to read, to walk around and think about stuff. And that was really the first time when I said: "OK, what do I actually want to do with my life? Who do I actually want to be?" And I became aware of the fact that I had constructed a persona to satisfy other people. And I'd been successful in doing so.

And I think ... the sometimes-negative aspect of growing up in this country without a firm cultural basis is that your entire being becomes predicated on satisfying others. And I discovered that's what I was doing. And if you're rewarded for that — if you're successful, if you get the good grades and the opportunities and the scholarships — then you think: "OK, I'm on the right path." But then at some point you have to confront yourself and say, "Well, I still feel this profound unhappiness. Why is that?" And that's the journey I undertook at Oxford, to discover why I was still unhappy despite all these external trappings of success that I had attained over the years. ...

Art became for me the pathway to, I think, achieving a kind of wholeness. I read two or three novels a week when I was at Oxford. I went to so many plays, I went to so many concerts — I mean, things I'd never really done before. And after a year of doing this, I had a much better sense of what made me laugh and what made me cry. And that was the beginning of my journey, I think, to becoming a more coherent individual human being.

On if the book has a message to those feeling marginalized by the U.S. right now

Absolutely. I do think that the point of this book is that we can write our own narratives, and I firmly believe that, and that's what Tunde does in the book. He begins to write his own narrative, and finds solace and hope and warmth in that in that space. And I think we can as well.

I think that we're at an era where a lot of people are beginning to step in, in a really firm way, into their identities. Whether people are saying ... they're born with one sex, they say: I'm actually another gender — that's who I am; or people are claiming their cultural heritage in a more profound way than they have in the past. ... For any number of reasons, we have an opportunity to construct our identities that are more honest and open and true to who we are than what we've been handed at birth.

Janaya Williams and Tinbete Ermyas produced and edited this interview for broadcast. Patrick Jarenwattananon adapted it for the Web.

Read an excerpt of A Particular Kind of Black Man