Accessibility links
Houses Of Worship Find New Life After Congregations Downsize As the percentage of Americans who belong to a church, mosque or synagogue declines, congregations are selling their buildings. Some of those former houses of worship are finding new life. 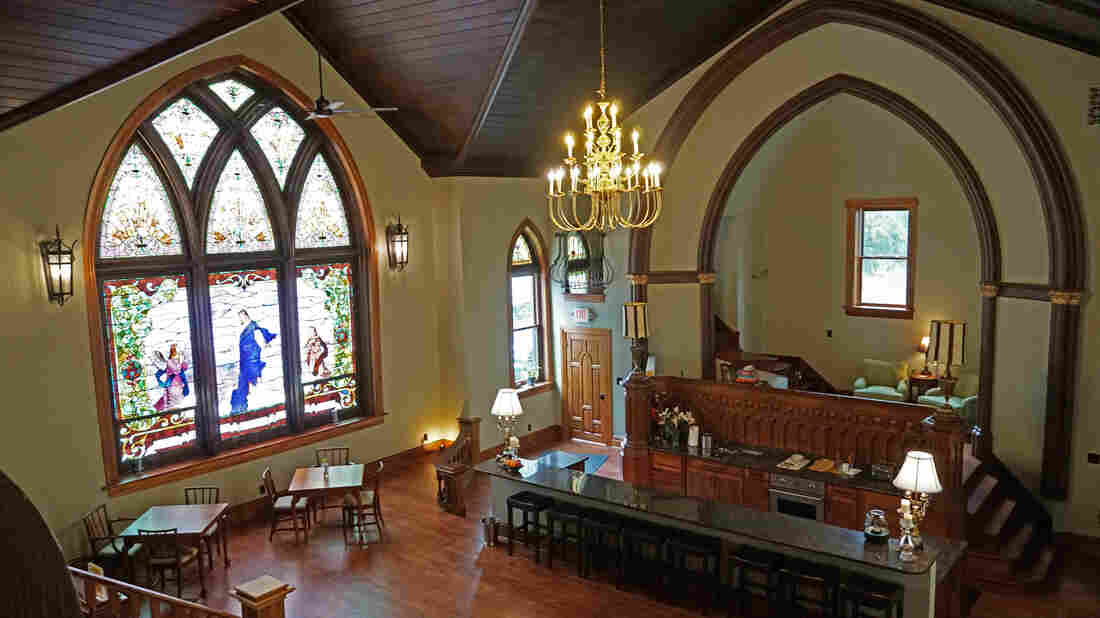 Clifton Heights Inn was once a Methodist Church and many of the guests who pass through are former congregants. Some have hosted weddings and anniversaries at the church turned inn. Shahla Farzan/St. Louis Public Radio hide caption 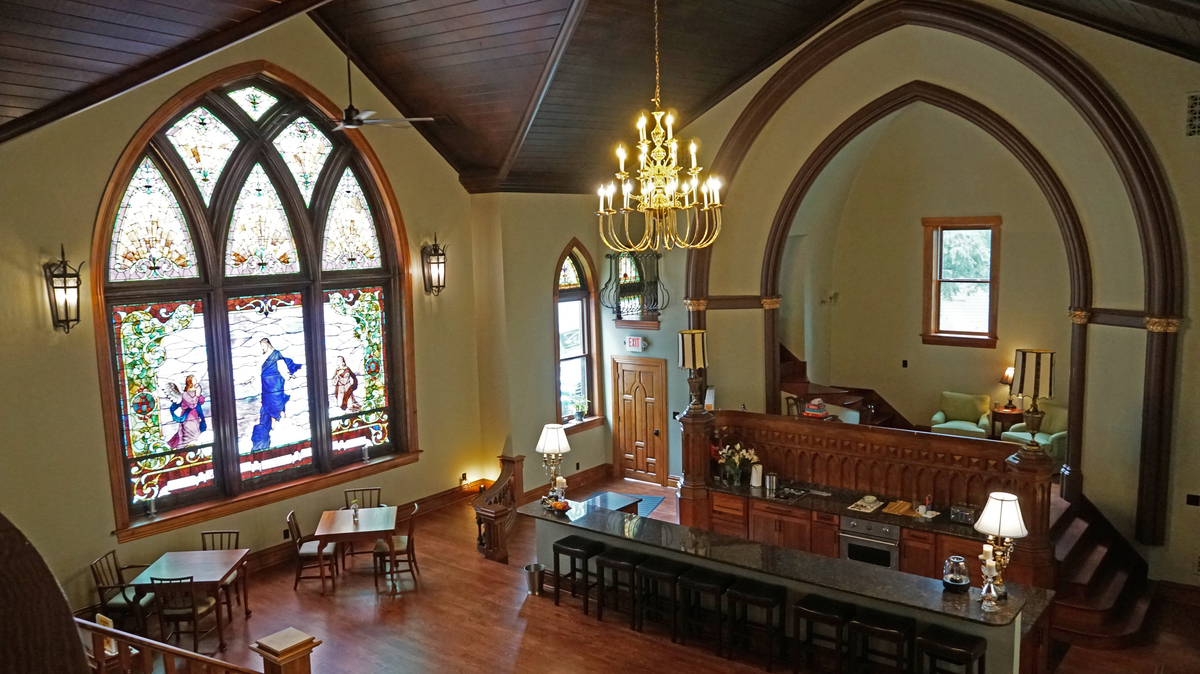 Clifton Heights Inn was once a Methodist Church and many of the guests who pass through are former congregants. Some have hosted weddings and anniversaries at the church turned inn.

When Lisa and Dan Macheca bought a century-old Methodist church in St. Louis back in 2004, they didn't think much about the cost of heating the place.

Then the first heating bill arrived: $5,000 for a single month.

"I felt like crying," Lisa Macheca said. "Like, 'Oh my gosh, what have I gotten myself into?' "

Over the course of a decade, the Machecas, who both have hospitality backgrounds, renovated the 115-year-old church into a bed and breakfast. Repurposing these buildings — known as adaptive reuse — is becoming increasingly common as the religious preferences of Americans shift.

The percentage of Americans who belong to a church, mosque or synagogue has declined in the past 20 years, forcing some religious leaders to make a difficult decision: sell their houses of worship and downsize.

In the U.S., many religious buildings were built during periods of religious growth, said Cleveland State University professor of urban planning Robert Simons.

"The buildings we have that were built in the '40s, '50s and '60s are not really functional for today's perspective," said Simons, author of Retired, Rehabbed, Reborn: The Adaptive Reuse of America's Derelict Religious Buildings and Schools. "Too many classrooms, a little bit too big."

These large religious buildings can fall into disrepair, placing a financial burden on shrinking congregations. The process is a "vicious circle," said Simons, because congregations in deteriorating buildings may have trouble attracting new members, which in turn reduces donations.

"Why not revamp what we have?"

More than 6,800 religious buildings have sold in the past five years and more than 1,400 are currently for sale in the U.S., according to the commercial real estate database CoStar.

Some will be sold to other congregations, while others will become something entirely different — like a nun-themed coffee shop.

In Columbia, Ill., Cafe on the Abbey opened last year inside the former convent of Immaculate Conception Catholic Church.

Cafe on the Abbey co-owner Danny Ball calls its logo of a nun drinking coffee "playful and respectful." The coffee shop is one part of a multimillion-dollar development in Columbia, Ill. Shahla Farzan/St. Louis Public Radio hide caption

Cafe on the Abbey co-owner Danny Ball calls its logo of a nun drinking coffee "playful and respectful." The coffee shop is one part of a multimillion-dollar development in Columbia, Ill.

Co-owners Danny Ball and Marcia Johns-Brooks are leaning into the history of the building. Patrons can nibble on a slice of pineapple preacher's cake along with a cup of Nun's Habit coffee — under a life-size painting of nuns enjoying a meal together.

Even the logo, a nun drinking coffee, pays homage to the building's previous life.

"We've been very playful with that," said Ball, who also serves as the restaurant's head chef. "Playful and respectful."

The coffee shop is one piece of an $8 million development, which includes a hair salon, event space and loft apartments.

Ball said he is thankful the buildings found a new life after the Catholic congregation moved to a new location across town in 2013.

"Anybody can bulldoze something down and build something new," he said. "But why not revamp what we have?"

Revamping old religious buildings can come with hidden costs, especially if developers have to run plumbing and heating vents through thick stone walls.

A new construction project might have fewer surprises, said Simons, but old houses of worship often have unique features that customers find desirable.

"The exterior of the building, the belovedness it has among the community, that's all a positive," he said. "What you really want is the stained glass and the beautiful interior finish."

It was overwhelming to see that we could wake up to the stained glass shining through in the morning.

"It was overwhelming to see that we could wake up to the stained glass shining through in the morning," Schaefers said. "I couldn't say no to any of it."

With its Gothic doorways and dark wood interior, Clifton Heights Inn still looks like a church — but Benjamin said she didn't feel any qualms about that.

"I was surprised. Like, 'Wow, this really is a church.' They kept that part very much intact. Some might say, 'Eh, I'm feeling a little uncomfortable about that,' but I found it to be very beautiful," she said.

But Lisa Macheca said her church turned inn has occasionally caused some confusion. She remembers one couple who walked into her bedroom while she was napping.

"They just thought this was a church to come in and tour," Macheca said, chuckling. "I don't know who screamed louder."

Running the bed and breakfast also brings more meaningful encounters. Many of the guests are people who once worshipped here. They come back for weddings, anniversaries or sometimes just to peek inside.

Not long ago, the inn hosted a wedding for a woman whose grandparents had been married in the church 80 years ago.

For Macheca, having a relationship with that community has been an unexpected gift.

"I thought I was just going to run a bed and breakfast, but that's really not been the case at all," she said. "It's amazing the connections I've made with people. I just love hearing their stories."