Accessibility links
Hong Kong Protests: Police And Demonstrators Clash, Ending Stretch Of Calm Pro-democracy demonstrators barricaded roads with bamboo and hurled bricks at authorities. They also tore down "smart lampposts" they fear are being used for surveillance by authorities in China. 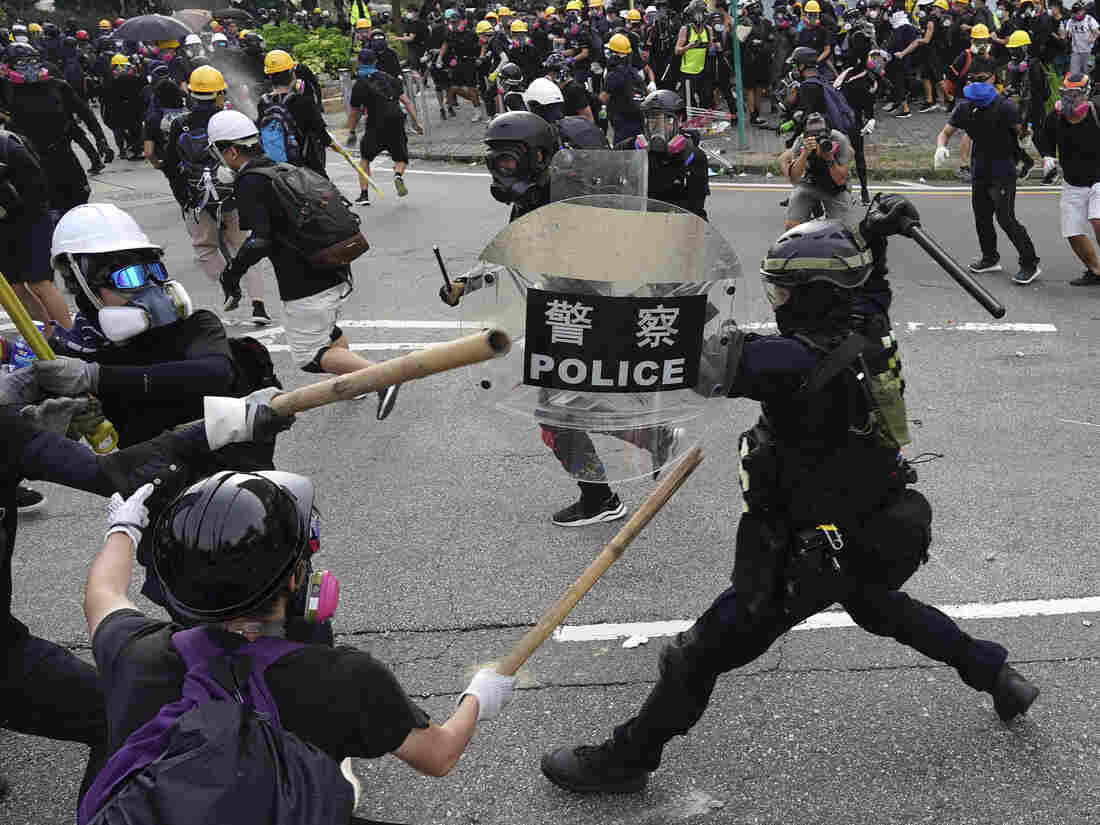 Police and pro-democracy demonstrators clashed during a protest in Hong Kong on Saturday. Protests began in June over an unpopular bill that would have allowed extraditions to mainland China. Vincent Yu/AP hide caption 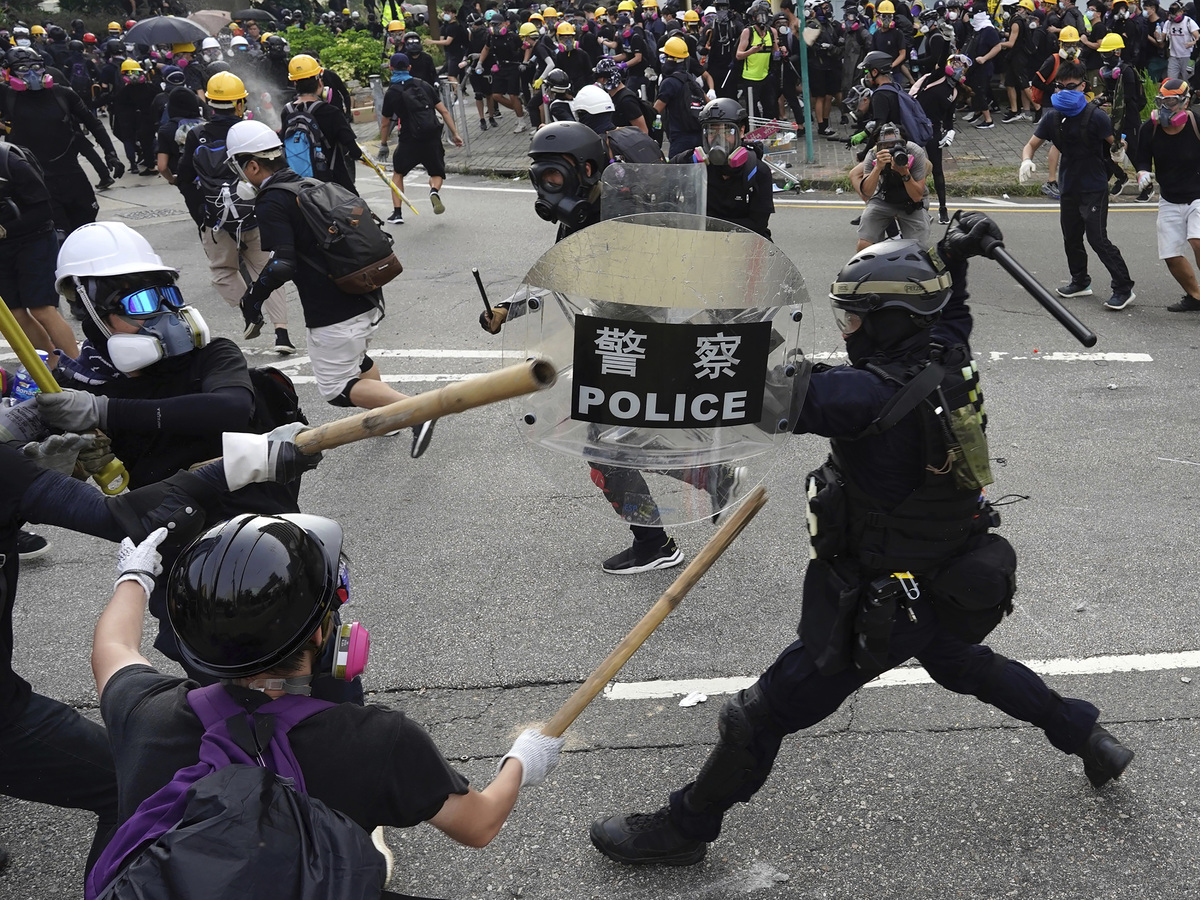 Police and pro-democracy demonstrators clashed during a protest in Hong Kong on Saturday. Protests began in June over an unpopular bill that would have allowed extraditions to mainland China.

After a stretch of relative peace in Hong Kong, a standoff between protesters and riot police became violent again on Saturday.

Police fired tear gas after pro-democracy demonstrators blocked roads with barricades made of bamboo sticks and hurled bricks, in the district of Kwun Tong.

In a statement, police said protesters paralyzed traffic and affected emergency services in the area near a police station.

Protesters tore down and dismantled "smart lampposts" out of a fear that they contain high-tech cameras and facial recognition software used for surveillance by authorities in China.

Some used an electric saw, attempting to slice through the bottom of a lamppost, while others tied a rope around it to successfully bring it crashing to the ground, The Associated Press reported.

The government in Hong Kong insists that the lampposts only collect data on weather, air quality and traffic, according to the AP.

There are plans to install about 400 of these smart lampposts over a three-year period, according to a government report. 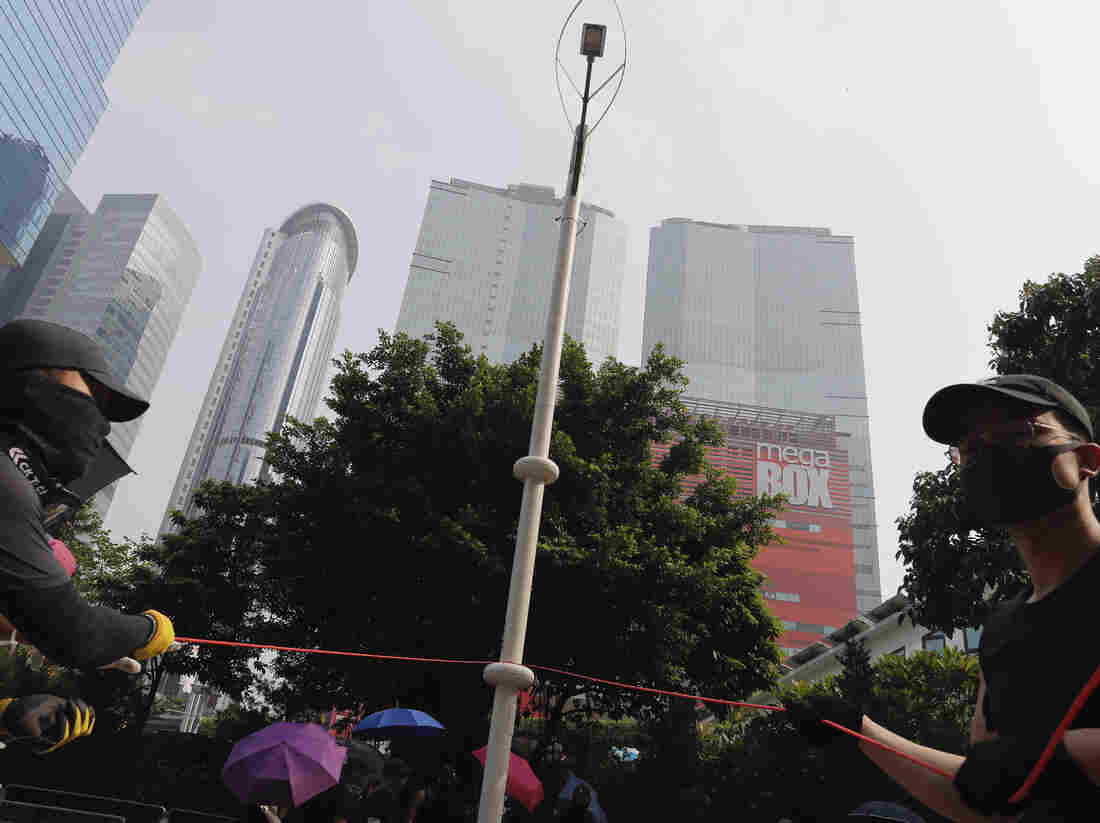 Demonstrators try to pull down a smart lamppost during the protest in Hong Kong on Saturday that turned violent. The smart lampposts are raising fears of stepped-up surveillance from authorities. Kin Cheung/AP hide caption 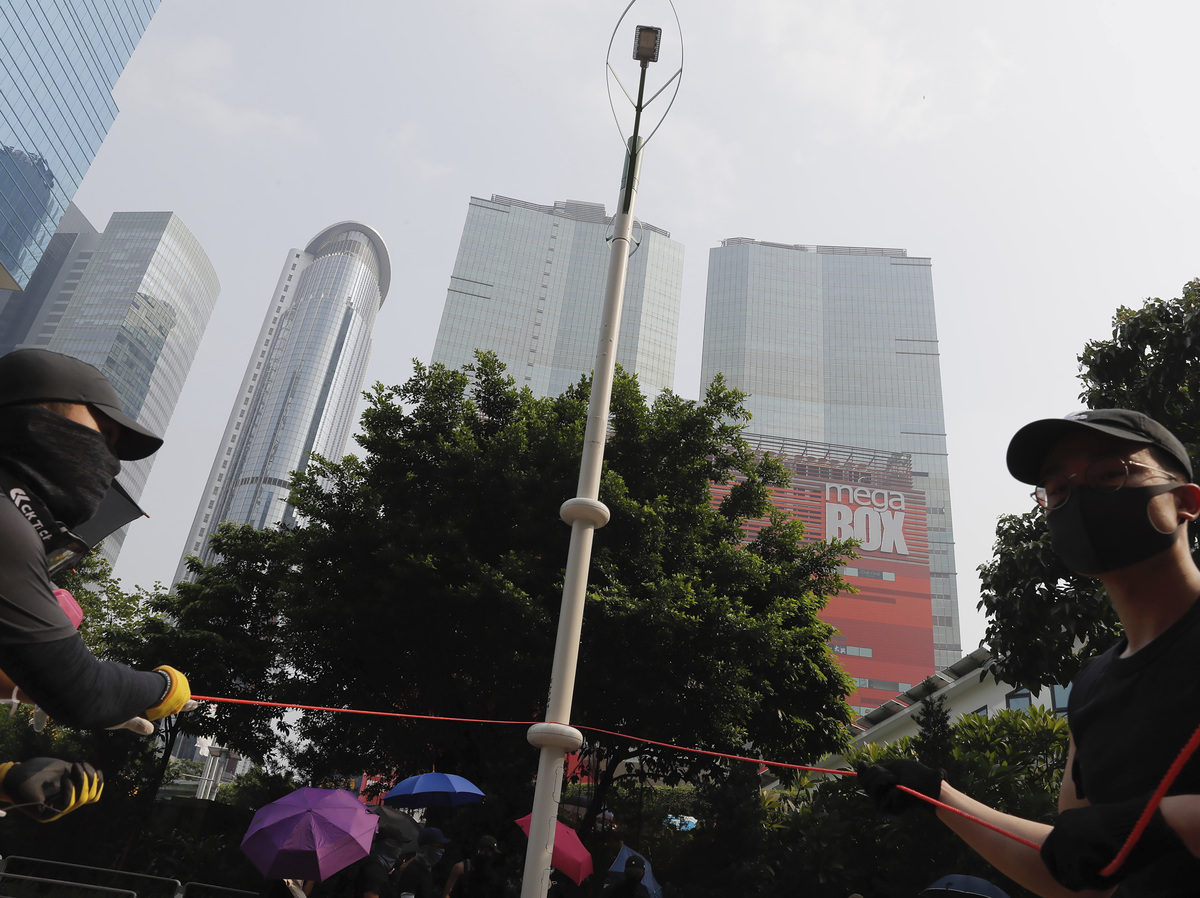 Demonstrators try to pull down a smart lamppost during the protest in Hong Kong on Saturday that turned violent. The smart lampposts are raising fears of stepped-up surveillance from authorities.

The latest skirmish marked the 12th straight weekend of demonstrations in Hong Kong and ended nearly two weeks of relative calm, according to the AP.

Just a day before, thousands of Hong Kongers held hands and formed human chains, in a peaceful bid to gain support from the international community, NPR's Anthony Kuhn reported.

"I don't expect that dialogue will be able to easily untangle this knot, stop the demonstrations or provide a solution to the problem," Lam wrote. "But continuing to fight is not a way out."

"After more than two months, everyone is tired. Can we sit down and talk about it?" she wrote.

The protests in Hong Kong originally began in June over a bill that would have allowed some extraditions of Hong Kong residents to mainland China. The bill sparked a backlash among those who saw it as a violation of the "one country, two systems" agreement that was formed in 1997 when Hong Kong was returned to China from Britain

The bill has since been shelved, but it's not formally dead. Hong Kong's government indefinitely suspended the legislation in June but hasn't withdrawn it entirely.

The demands from the movement have since expanded and now include calls to investigate excessive police violence during the demonstrations and a more transparent and open government.

Also on Saturday, Simon Cheng, a worker from the British Consulate in Hong Kong, was released after being detained in mainland China.

Cheng disappeared on a business trip in mainland China two weeks ago amid the rising tensions between Beijing and London.

It wasn't immediately clear whether Cheng's detention had anything to do with Britain's support of the pro-democracy protests, NPR's Scott Neuman reported.