Accessibility links
Shhhhh. Listen Closely. Your Plants Might Be Talking With extremely sensitive microphones, a new exhibit at the Brooklyn Botanic Garden shows it's possible to hear the sounds that plants make when they're growing. 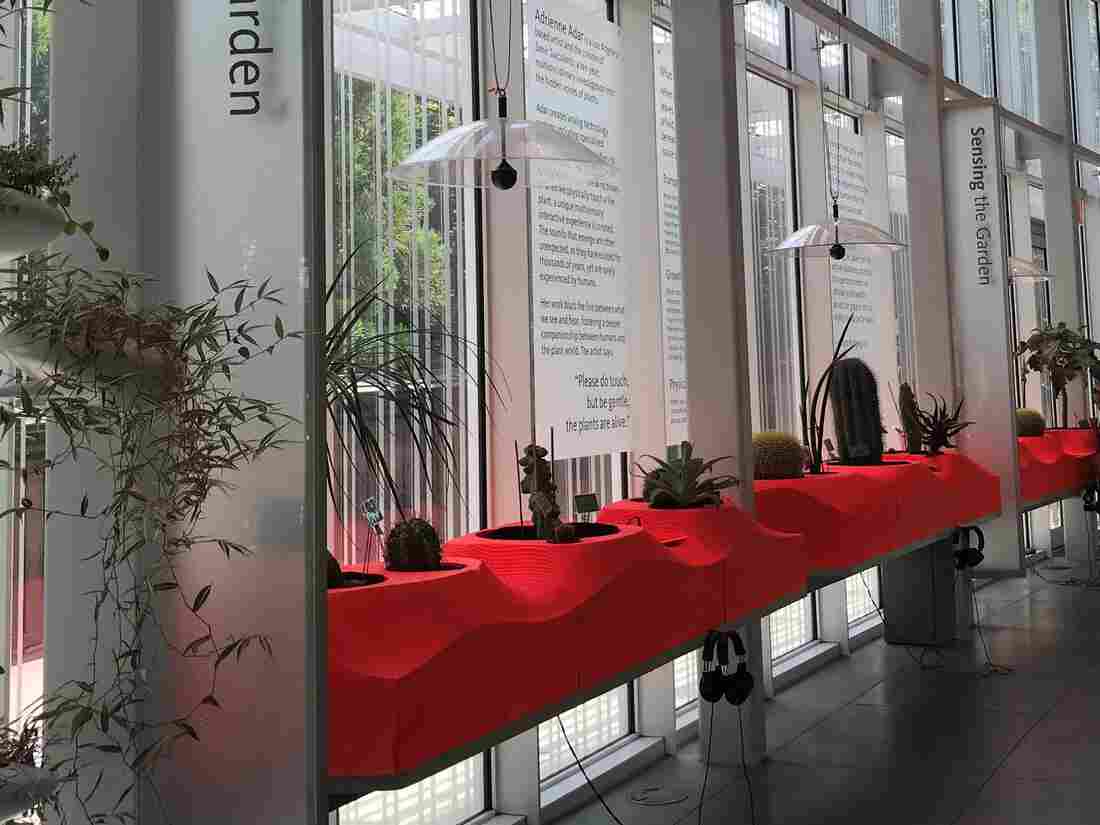 As part of the "Sonic Succulents" exhibit at the Brooklyn Botanic Garden, visitors are encouraged to touch plants and listen to what that contact sounds like. Dana Cronin/NPR hide caption 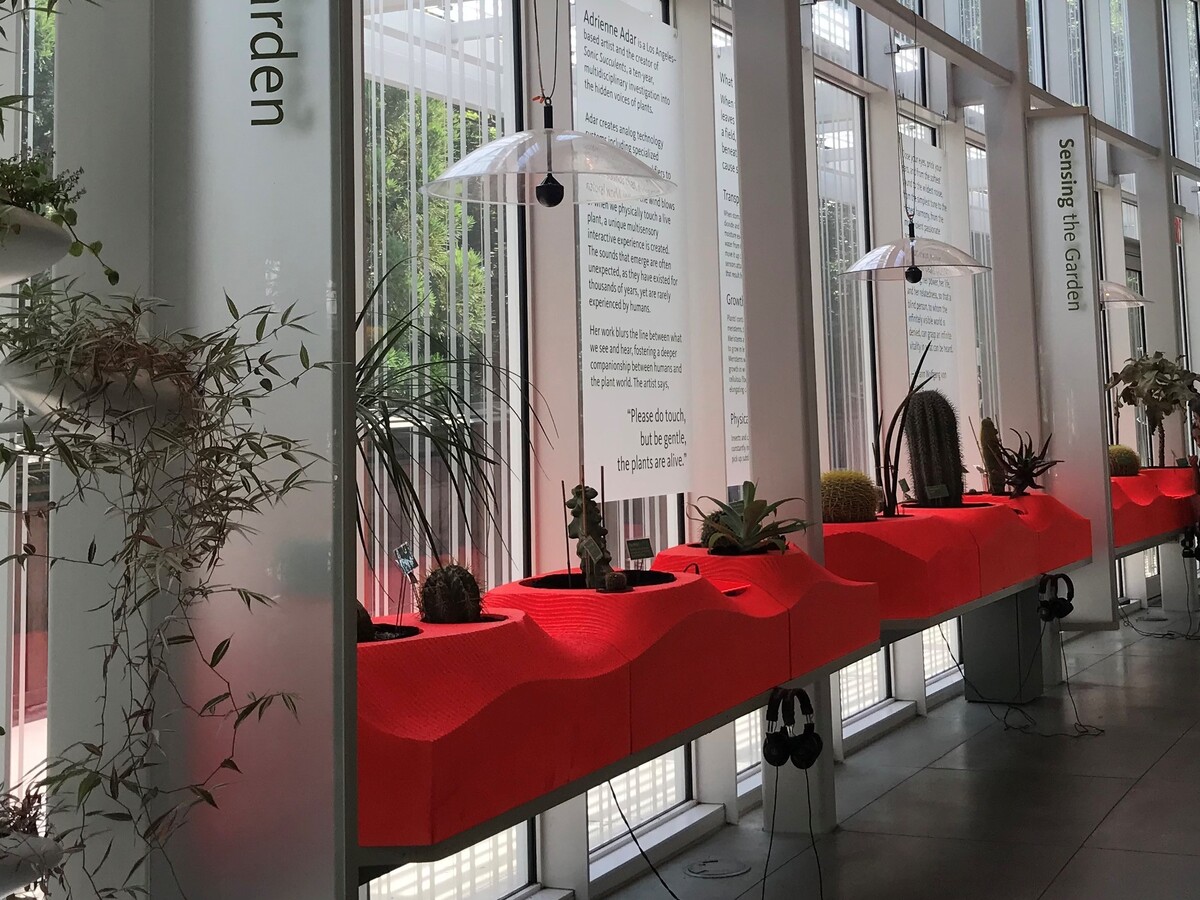 As part of the "Sonic Succulents" exhibit at the Brooklyn Botanic Garden, visitors are encouraged to touch plants and listen to what that contact sounds like.

There's an old belief among farmers that on a quiet night, if you listen closely, you can hear the sound of corn growing.

A new exhibit at the Brooklyn Botanic Garden proves that theory to be true. Take a listen:

The sound of corn growing

Adar is a sound artist based in Los Angeles. She's passionate about the natural world and says her goal is to show people that plants aren't that different from us: They grow, breathe and even communicate in their own ways.

And so, back in May, she planted a patch of corn within the Brooklyn Botanic Garden and has surrounded it with large yellow megaphones that visitors can stick their heads inside to listen to what a growing stalk sounds like. It turns out the sound is almost extraterrestrial.

"It can be a little bit meditational ... children were sitting on the ground and putting their heads in the lower horns and just hanging out," she said.

This isn't the first time Adar has used her art to explore the sounds of nature. In 2016, she connected listening stations to trees around the city of Taos, N.M., for an exhibit designed to allow locals to experience the area's native trees and plants in a new way. 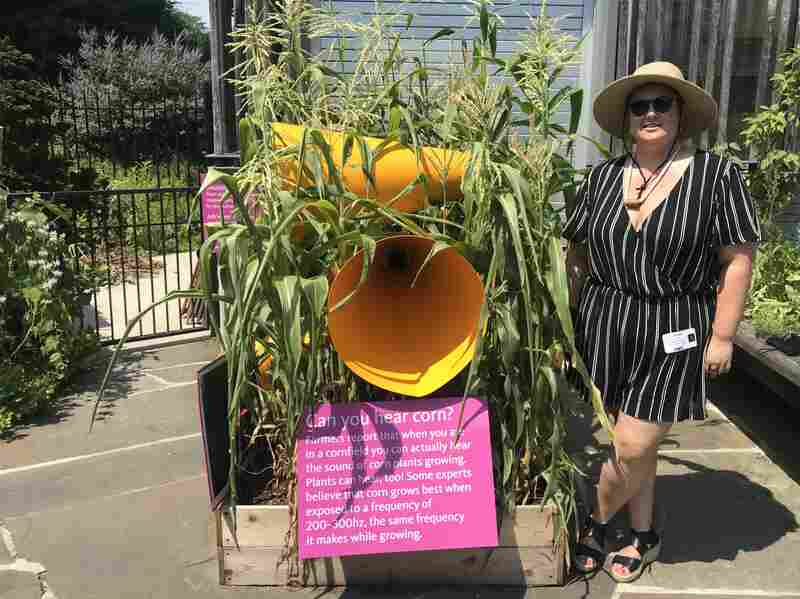 Adrienne Adar, the artist behind "Sonic Succulents," stands next to corn she planted in May at the Brooklyn Botanic Garden. Dana Cronin/NPR hide caption 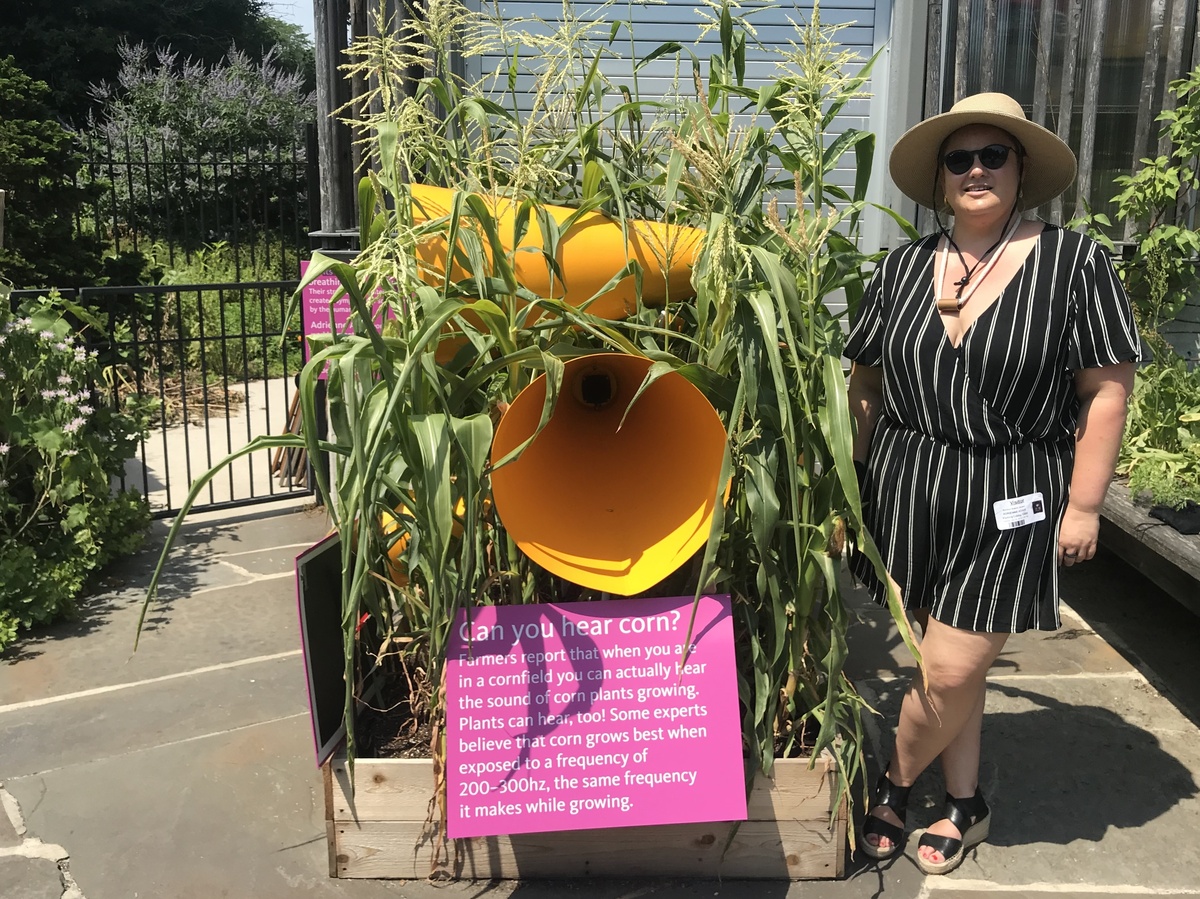 Adrienne Adar, the artist behind "Sonic Succulents," stands next to corn she planted in May at the Brooklyn Botanic Garden.

Adar says she's inspired by the work of scientists like Monica Gagliano, an ecologist at the University of Western Australia, whose research focuses in part on how plants, like animals, are sentient beings with cognitive abilities. They can learn, remember and have their own methods of communication. Gagliano has done experiments showing that plants are able to detect specific vibrational frequencies, like the sound of water, and grow toward that sound.

Adar was fascinated with the idea that plants are sentient. In conceptualizing the exhibit, she says audio was the most effective way to get that idea across.

"You hear a sound, a big sound, and you move and [say], 'What is that?' Or if you hear something in your apartment moving, you kind of assume it's an animal. You always think there's an alive quality," she said.

Inside the exhibit there's a long line of potted plants, including cacti, palm plants and succulents, paired with headphones. Visitors are encouraged to touch the plants, at which point tiny microphones embedded in the planters pick up the vibrations of the touch and make it audible.

Here's the sound of someone thumbing a succulent leaf:

And here's the sound of someone flicking the spines on a cactus.

Adar says she wants visitors to hear those sounds and realize the impact we have on plants — and to hopefully come away with a newfound respect for them.

"Listen to what it feels when you touch it," she said. "So when you step on a plant... maybe next time it changes the behavior."

The exhibit runs through Oct. 27.