Accessibility links
'My Papi Has A Motorcycle' Pays Loving Tribute To A California Childhood Author Isabel Quintero and illustrator Zeke Peña worked together on My Papi Has a Motorcycle, a homage to Quintero's childhood in California's Inland Empire, and to her hard-working father.

My Papi Has a Motorcycle, by Isabel Quintero and Zeke Peña, pays tribute to the rapidly-changing city of Corona, Calif., where Quintero grew up. Kokila hide caption

My Papi Has a Motorcycle, by Isabel Quintero and Zeke Peña, pays tribute to the rapidly-changing city of Corona, Calif., where Quintero grew up.

In My Papi Has A Motorcyle, a little girl named Daisy Ramona waits for her dad to come home from work so they can ride around their city, Corona, Calif., on the back of his motorcycle. They pass a tortilla shop, a raspado shop, her grandparent's house, and her dad's construction site. 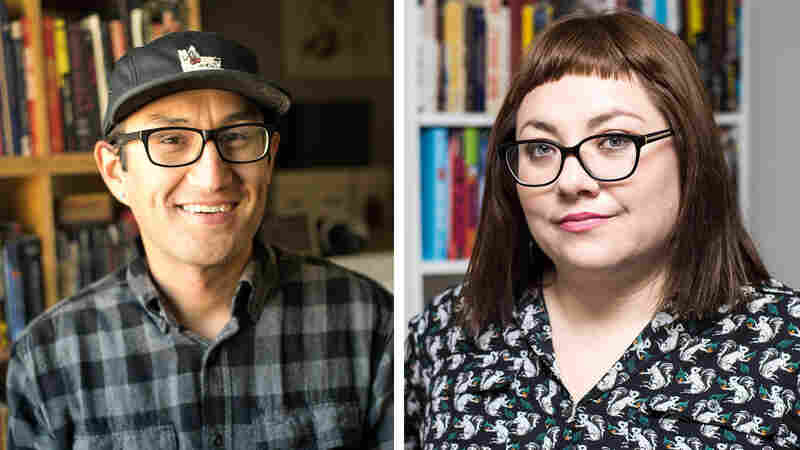 The book is illustrated by Zeke Peña and written by Isabel Quintero. It's a love letter to the city, and her father.

"When I was a kid my dad would get home from work, and he put me on the back of his motorcycle and he would drive me around the neighborhood I grew up in in Corona," Quintero remembers, "and you know, it was the '80s, so there were no helmets — in the book, obviously, there's helmets, but it was a different time. And you know, I really was holding onto that memory and it was so special to me, that relationship between myself and my dad."

This summer we've been asking authors and illustrators how they work together to bring stories to life. They often don't — but illustrator Zeke Peña says he and Quintero chatted back and forth constantly. "She even was cool enough to go drive in her car around the neighborhood that she grew up in so I could physically see the space and see the turns of the corners, see the trees, the way the homes are built — kind of those things. This shows through in the story, right? Like there's really specific things that are from Isabel's memory, you know? I sneak some things from my own memory in there a little bit as a kid, but there's this specificity. That's what for me makes the story so strong, is that Isabel has this personal experience, and we're we're trying to tap into that and illustrate that, and kind of create that spark for for other readers young and old." 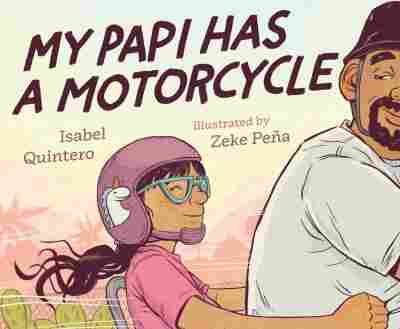 My Papi Has a Motorcycle

by Isabel Quintero and Zeke Peña

"When I was a kid in Corona there was a tortilleria — in the book it's Tortilleria Estrella, in real life it was Tortilleria Don Leon — and that was torn down," Quintero says. "I think those things are are pretty specific to where I was at. But I think other people can connect to living in a community where you walk to places like a tortilleria or to Joy's Market. Zeke did such an amazing job with that market, that so many people have told me, like, I know that market. That market's in my neighborhood, you know, with the piñatas outside, and the little gumball machines, and the carnicería inside the store. So it is very specific, but it's also a story that especially Latinx kids in other parts of the country can enjoy or relate to."

"For me in the book, it's like that first page — Daisy Ramona's working on the motorcycle, and she's working with this toolbox, and that was my dad, like that's kind of really what I got from my dad, was you know, learning how to work with my hands, learning how to work hard and stuff," Peña says. "But I think that with Isabel and I, it's nice because a lot of our backgrounds as people who identify as Latinx or Chicanx or Chicanos, there's this really narrow definition of what that is. But the nice thing with my collaboration with Isabel is that we span like a spectrum of that, right? And it doesn't necessarily look just one way. I hope that the youth reading our book walk away with a validation of their own story, and where their own family comes from and their heritage. And their right to it, their right to express that as they wish."

Isabel Quintero says she teared up at this image of Daisy Ramona's visit to her dad's work site. Kokila hide caption

"Going off the toolbox," Quintero adds, "my dad also works with his hands. And so that scene, that spread, where Daisy Ramona gets to the worksite with her dad is probably one of my favorite scenes in the book, because Zeke was able to capture so much emotion of what it's like for a kid like myself, like when I was a kid, going to work with my dad, and that happiness and that joy of getting to see where my dad worked. You know, hearing the sound of the the music, the music in Spanish in the background, and the men yelling at each other and cracking jokes. So when I opened to that spread I cried, because you don't see a lot of celebration of working class people in children's books, especially not working class brown men. And I know there will be a lot of children who will be able to say, oh, that's my dad."

We couldn't ignore that we're talking about Isabel Quintero's love letter to her city and her people; Zeke Peña is from El Paso — and earlier this month his city suffered an enormous loss, a mass shooting that targeted the Latinx community and took the lives of 20 people.

"It breaks my heart, it breaks my heart to see these people suffering. To see my people suffering. Our community," he says. "You know, who am I to be commenting on it. I do have friends and family that were affected directly. My love goes out to those people. And also my action goes out to those people, right? That's something that we're all going to have to live with for the rest of our lives. And we're going to hopefully do something to change it."

This piece was produced for radio by Samantha Balaban and Barrie Hardymon, and adapted for the Web by Petra Mayer.