Accessibility links
'Hair Love' Uses Animation To Bring A Story Of Natural Hair In Black Families To Life Conceived and directed by Matthew Cherry, it follows the story of an African American father — Stephen — and his daughter, Zuri. Stephen is trying to learn how to do Zuri's glorious natural hair. 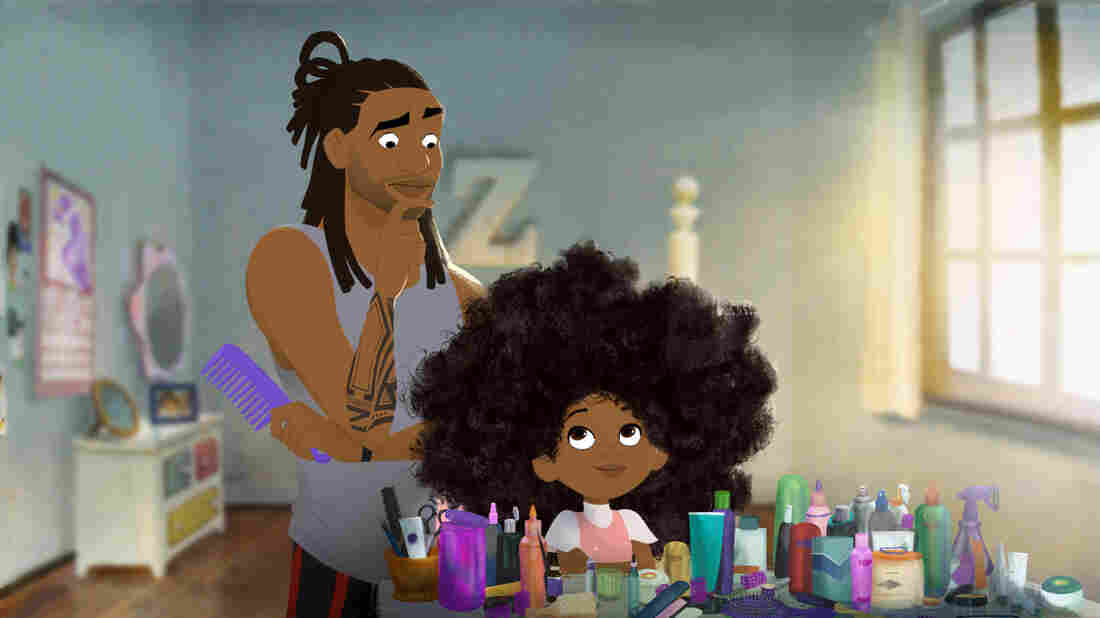 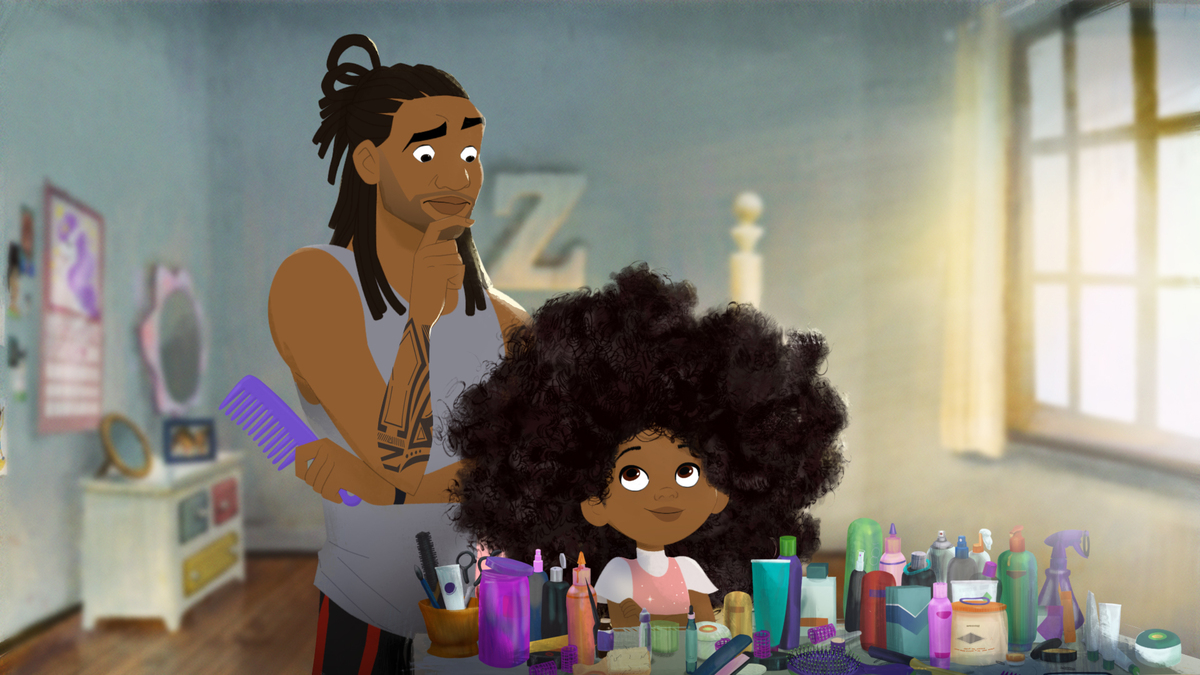 The new animated short Hair Love follows the story of an African American father trying to do his daughter's hair.

If you are heading to the movies to see The Angry Birds Movie 2, then you are in for a double treat. Playing before that feature is an animated short called Hair Love.

Conceived and directed by Matthew Cherry, it follows the story of an African American father — Stephen — and his daughter, Zuri. Stephen is trying to learn how to do young Zuri's glorious natural hair, and, well, it's not so easy.

To help fund the project, Cherry went to Kickstarter and began a campaign as he previously did for his two indie films. He says these campaigns aren't just about financing the projects but also about building a fan base and allowing "people who may want to be involved or kind of see the project through to help out."

As audiences have been introduced to Zuri and Stephen, they've seen the father's struggle in trying to groom his daughter's hair and have been able to relate. Cherry says one of the biggest things he has heard in response from those who have seen the short is about the representation it provides.

"When we did this campaign two years ago, there wasn't a lot of representation in animated projects," Cherry says. "You know, oftentimes they would cast actors of color, but, you know, they'd be playing inanimate objects or animals. And, you know, it was rarely, like, actually seeing a family dynamic in animation."

He notes that there are films like Disney's The Princess and the Frog and Home, which features Rihanna, but Cherry says he wanted to give audiences an animated black family.

"I think it does also a lot for young people's confidence when they see themselves represented," Cherry says. "You know, media is so powerful. And when you grow up and see magazine covers and TV shows and movies and you don't see yourself represented, but you see every other type of hairstyle represented, that can really affect your self-confidence."

Cherry says he has heard from both young girls and boys, as well as fathers and mothers who aren't African American — all of whom have connected with the short.

Though he isn't a father himself, Cherry says it was important to him to show a black man in a loving, tender role.

"We really get a bad rap in mainstream media, particularly black fathers," he says. "There's always the stereotype that we're not present or deadbeats. ... And while obviously those situations do exist, it feels very much so that it's just like disproportionately represented in that way."

But that's not the kind of fathers his friends are, so Cherry channeled their experiences when creating Hair Love.

"I have a lot of friends that are young fathers, and they're all willing to do whatever it takes for their young girls," he says. "This was just kind of me put[ting] myself in their shoes and kind of representing and also really being inspired by all these viral videos of dads doing their daughter's hair and people just really being fascinated by that."

Prior to Hair Love, Cherry worked as an executive producer on Spike Lee's BlacKkKlansman. He also worked on commercials and music videos, and before that, he played in the NFL.

While creating the Hair Love book and short, Cherry kept in mind his own experience with natural hair during his time in the NFL.

"I had my hair long enough to where it could be braided," he says. "Every week I'd have to go and get it worked on and stuff. So, you know, I think for both men and women, it's definitely something that's a big part of our life."

NPR's Gemma Watters and Tinbete Ermyas produced and edited this story for broadcast. Wynne Davis adapted it for the Web.