Accessibility links
Trump Open To Meeting Iran and China's Leaders, But Next Steps Unclear Trump and French President Emmanuel Macron convened a joint news conference in Biarritz, France, at the end of the G-7 gathering of global economic powers. 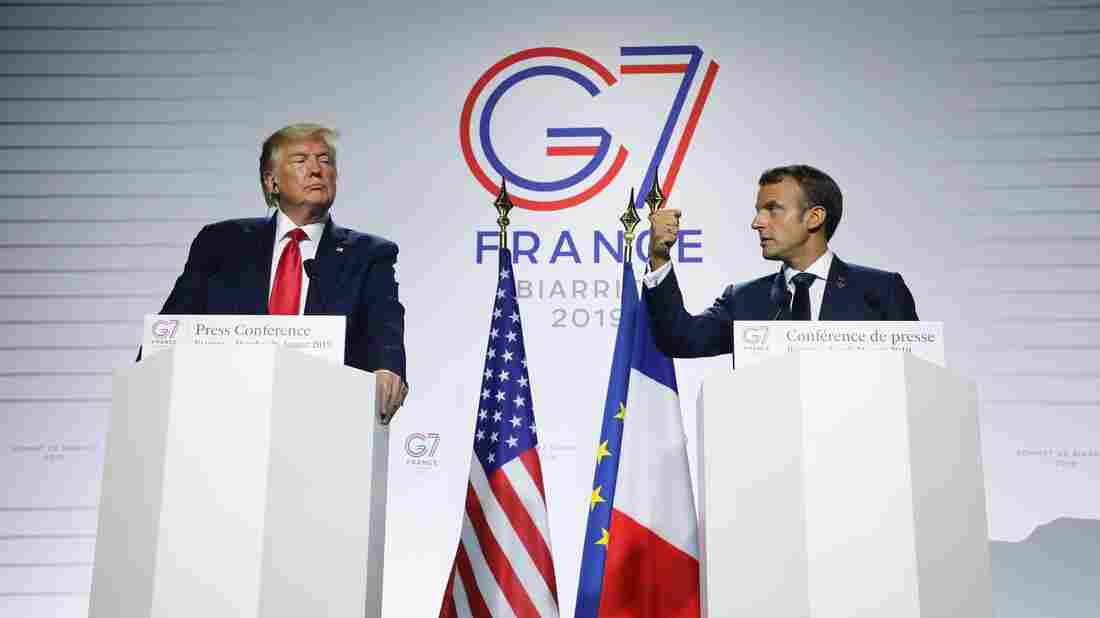 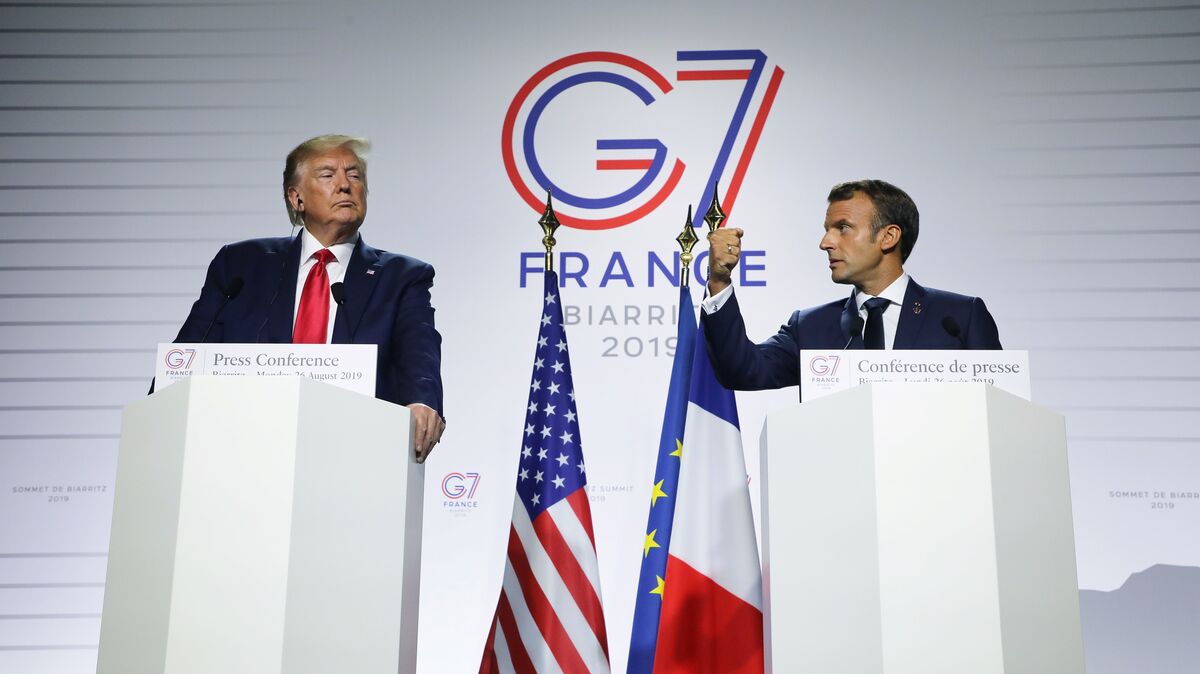 President Trump said Monday that his door might be open for meetings with Iran's president and China's leader as he concluded his visit to the G-7 summit in France, but it isn't clear what if any action may come next.

Trump said he believes Beijing "wants a deal very badly" to end its trade war with Washington and that he'd consider meeting with Iran's president if Tehran came to terms over its nuclear program.

"If the circumstances were correct or right I would certainly agree to that," Trump said.

What isn't clear is what, precisely, that might require and whether Trump or the American side are willing to exert themselves to make either conference happen.

French President Emmanuel Macron, with whom Trump appeared on Monday after the global leaders' summit, has been trying to broker new talks between Iran and the United States — including an invitation to Iran's foreign minister to visit France as the G-7 nations were meeting.

Macron said Trump and the Americans were kept in the loop about those overtures. Trump said he would be open to some concessions, including giving Iran a "line of credit" to help its economy, which he said would be secured by the nation's oil supplies — if it were willing to make new concessions on its nuclear program.

Regarding China, Trump said he is willing to reach an agreement on trade "only if it's a good deal and a fair deal," but he said he believes the Chinese are eager and "I think we're going to get there." 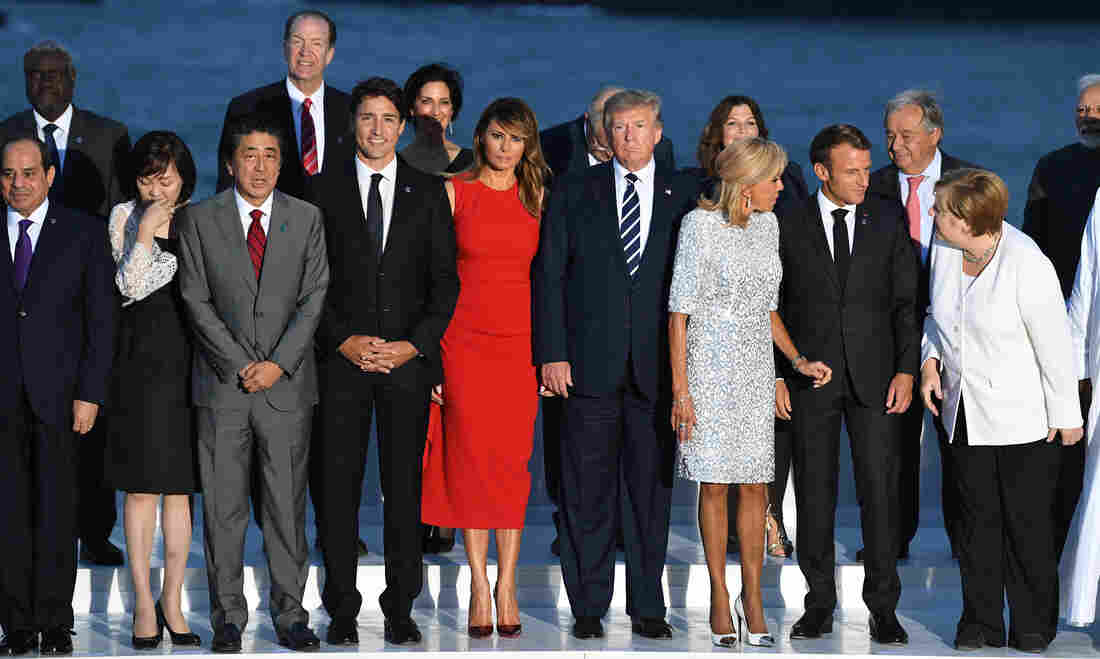 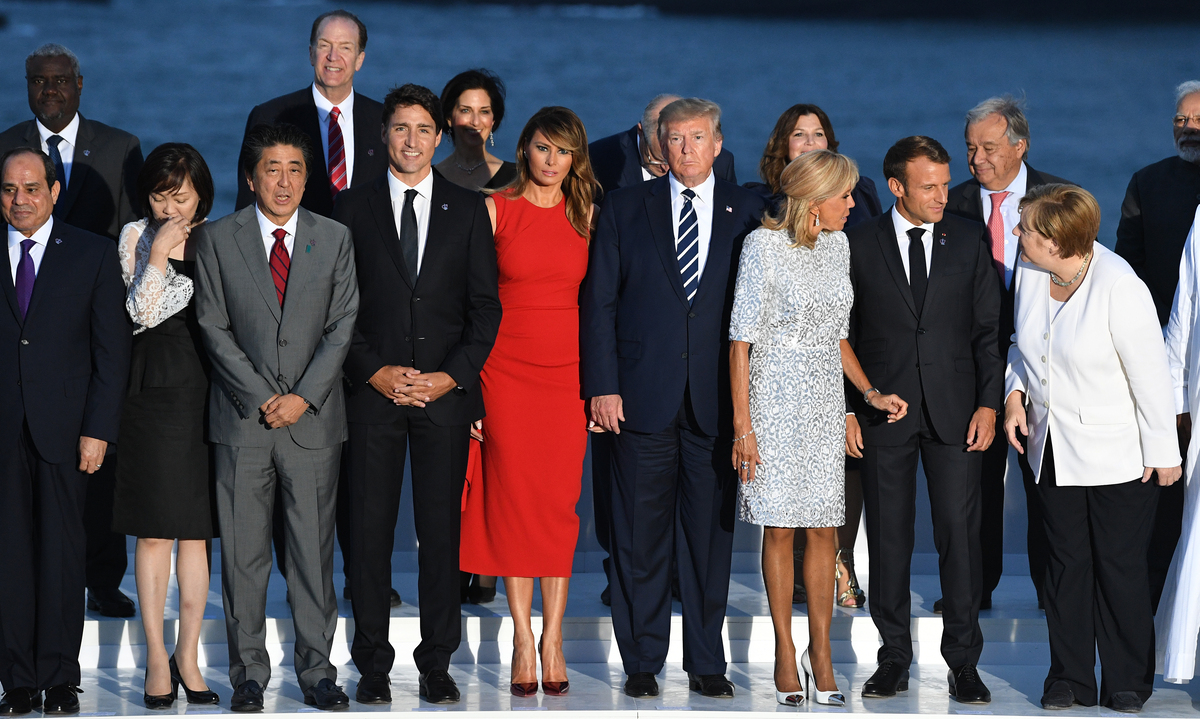 World leaders gather for a group photo at the G-7 summit in Biarritz, France, on Sunday. Summit host and French President Emmanuel Macron and President Trump held a joint news conference on Monday.

Trump defended the erratic course corrections that have characterized his handling of the China trade and other matters.

For example, Trump announced additional tariffs on China last Friday and said he was "ordering" American businesses to assess withdrawing from China. That prompted a huge sell-off on Wall Street. Then he made more conciliatory remarks Monday at the G-7.

The remarks on Monday followed a day of seemingly contradictory comments about the ongoing trade war with China and the unexpected appearance by Iran's foreign minister.

Hours later, White House officials said Trump was being misinterpreted and that what he meant was that he had second thoughts about not imposing even more punitive tariffs on goods. In other words, he was having "second thoughts" about not having been even harsher.

By Monday, Trump cited statements that he said were coming from Chinese leaders that he said suggested they were eager to negotiate and that he was prepared to move ahead to settle the dispute over imports, exports and tariffs.

"We'll see what happens, but I think we're going to make a deal," Trump told reporters.

Such False and Inaccurate reporting thus far on the G-7. The Fake News knows this but they can’t help themselves! Leaving now to have breakfast with Boris J.

Trump and Macron's news conference followed the unexpected arrival on Sunday of Iranian Foreign Minister Mohammad Javad Zarif, who met with France's delegation. Macron, who is hosting the G-7 in Biarritz, has been attempting to ease tensions following the U.S. withdrawal from the Iran nuclear agreement in 2018.

Asked about Zarif's appearance on Sunday, Trump gave a rare "no comment."

But on Monday, Trump again faulted reporters, saying they mischaracterized what had happened. He insisted that he was not surprised and that he did not feel that Macron had been disrespectful by inviting Zarif. In fact, he had been consulted, Trump said.

Trade And Economic Tensions Loom Over G-7 Summit In France

The stated focus of the summit was inequality, but Macron said ahead of time there would be no official communique after the talks.