Accessibility links
In 'Silver, Sword And Stone,' Desire For Treasure, Power And Control Unites Latin America In an epic story, Marie Arana gets at the identity conundrum of Latin America with storytelling that is both clear-eyed and evocative. 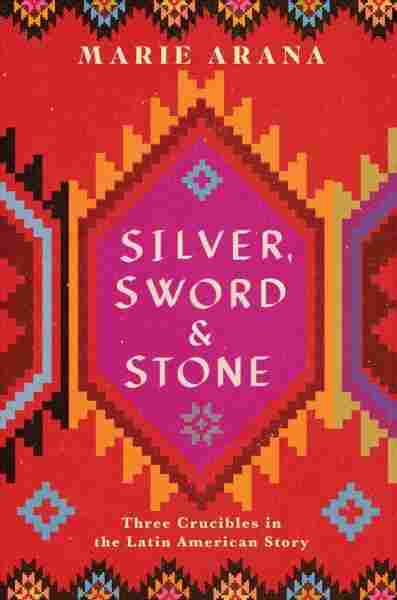 Since the day colonizers perpetrated the false idea that America was really India, some North Americans have tried to "solve" Latin America by defining Latin America.

Depending on the author, Latin Americans are good neighbors or rapists, requiring handshakes or barriers. As Leo Chavez has written, it's mostly a Latino threat narrative that dominates mainstream media. And as current and past events attest, the "solution" to this "threat" is elusive. The revolutions and global power plays continue.

Marie Arana's new book Silver, Sword and Stone: Three Crucibles in the Latin American Story, gets at the identity conundrum of Latin America with storytelling that is both clear-eyed and evocative. The region is a historian's paradox, a place where the flux of current events makes elucidating the past more a mystery than an art. The lesson from her story: We can never really know what we don't know about Latin America. There, "change is constant. Volatility is the norm. A definitive history is impossible when so much is happening just outside the window."

And so Arana's timely and excellent volume is not a history. It's not one of those cultural safaris one often sees substituted for thoughtful writing about global regions. Her book is a combination of stories, journalism, history and most important, insight. It may be impossible to fully understand the why of Latin America. But any attempt at cross border engagement, especially now, must try impossible things.

This is what Arana achieves in Silver, Sword and Stone — a story of Latin America that reveals the why of it. If the sweep and soar of her narrative recalls Victor Hugo, the essence of her voice delivers that feeling which results from knowing what happens when people choose not to understand — that sense of yearning one often discovers in the music and poetry of Latin America's great artists: Violetta Parra; Octavio Paz; Alfonsina Storni come to mind. Arana gives us an epic story of stories — of regions conjoined by desire for treasure, power and control, and of the emotional mortar which binds people together through endurance.

Arana's story is told in a style blending literary narrative and historical reconstruction. It follows three people whose individual journeys intersect with three essential aspects of the region: exploitation of natural resources (silver); conflict (sword) and spirituality (stone). We follow Leonor Gonzales' struggle to work gold mines in the Andean cordillera of Peru, the migration of Carlos Buergos from Communist Cuba to the civil war in Angola to the drug wars of American consumer appetites and, finally, Xavier Albó, a modern Jesuit priest ministering to ancient aspirations in Bolivia. They never meet and yet they are bound together by a syncretism forged from Latin America's quest for wealth, power and faith. Their journeys are a testament to James Baldwin's observation, aptly quoted by Arana: "American history is longer, larger, more various, more beautiful and more terrible than anything we have ever said about it."

Narratives describing Latin America have been popular since the first encounter between colonizers and indigenous peoples. There are the illustrations in the Mexican codexes of the brutal reality of colonization. There's the "true history" of the conquest by the conquistador Bernal Díaz del Castillo, Octavio Paz's Labyrinth of Solitude, the prose of Sor Juana Inés de la Cruz, Elena Poniatowska's La noche de Tlatelolco, stories by Jorge Luis Borges, Pablo Neruda, Gabriel García Marquez.

Silver, Sword and Stone fits with the best of these. Arana's investigation into the lives of real people walking paths of exploitation, religion and violence reveals the normality of exploitation, religion and violence. Peer closely at the foundation of their stories and one finds poverty and repression perpetrated by colonizers and colonized. As Arana writes, "Plumb the impetus for a crime, or for the deeper reasons for abiding anger, and the triumvirate of race, class, and poverty are almost always at the root of things in Latin America ... Violent repression was not an alien quantity here. Both sides knew the uses of crude savagery, and they relied on it, employed it, were undone by it. It was the natural course of things."

A reading of Silver, Sword and Stone is a punch in the face — the real impact of greed, violence and religion comes through viscerally. But Arana's book also reveals the paradox which both supports and defies centuries of oppression. It's the Latin American's capacity to endure. More than a lesson on oppression, this is a story about the fatalism of resilience.

Read an excerpt of Silver, Sword, and Stone