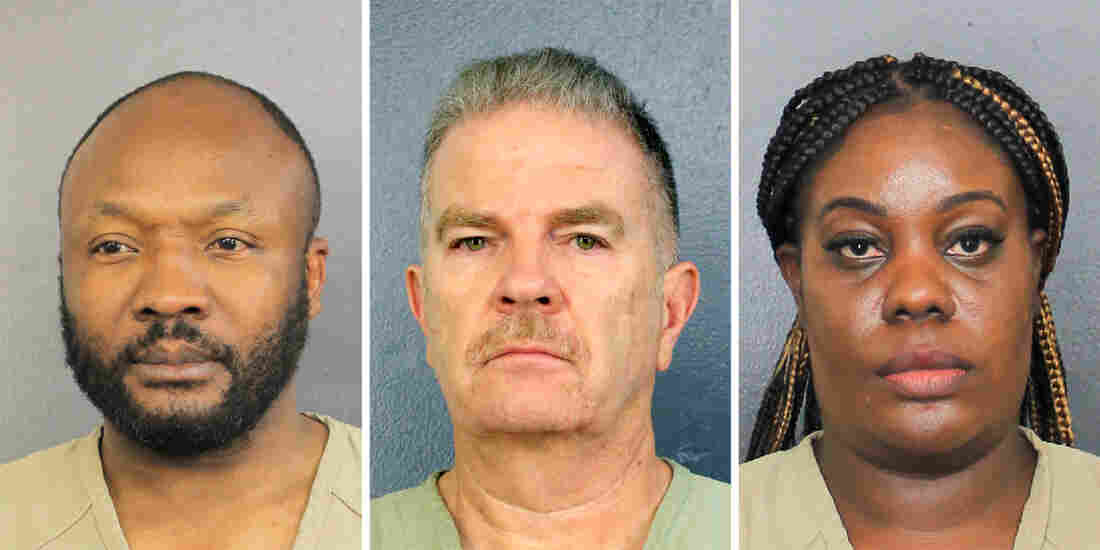 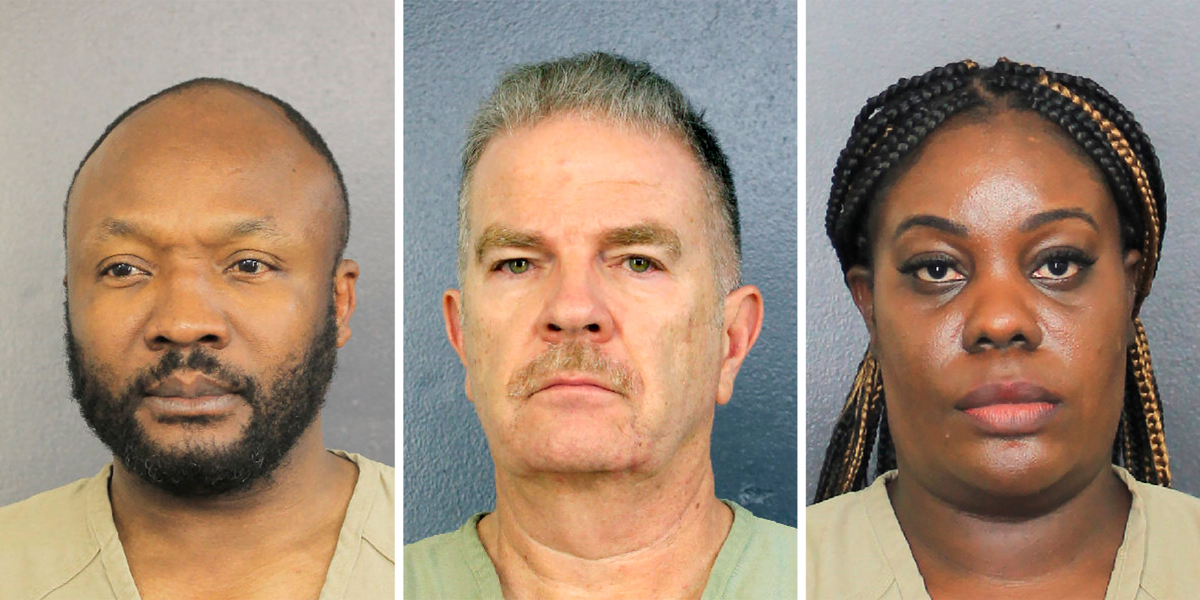 Sergo Colin (from left), Jorge Carballo and Althia Meggie, all former workers at the Rehabilitation Center at Hollywood Hills, in Florida, face multiple counts of aggravated manslaughter. Meggie and another nurse face additional charges related to tampering with evidence.

Police in Hollywood, Fla., outlined criminal charges Tuesday against four former employees of a rehabilitation center, saying they were culpable in the deaths of a dozen patients nearly two years ago.

Those deaths came in the days after Hurricane Irma hit Florida in September 2017. The storm knocked out power to the air conditioning system at the Rehabilitation Center at Hollywood Hills. Officials say the patients died from complications of heatstroke due to environmental issues.

Chris O'Brien, the city's police chief, said relatives of the victims have been "living an absolute nightmare" since the circumstances surrounding their loved ones' deaths have come to light.

"They placed their faith and trust in the Rehabilitation Center of Hollywood Hills, its medical and administrative staff, and that trust was betrayed," O'Brien said.

He went on say those people facing charges "failed to take the actions needed to protect their patients and render aid at a time when they needed it the most," O'Brien said at a Tuesday news conference.

Those charged include former administrator Jorge Carballo and Sergo Colin, a former night shift nursing supervisor. They face 12 counts of aggravated manslaughter each. 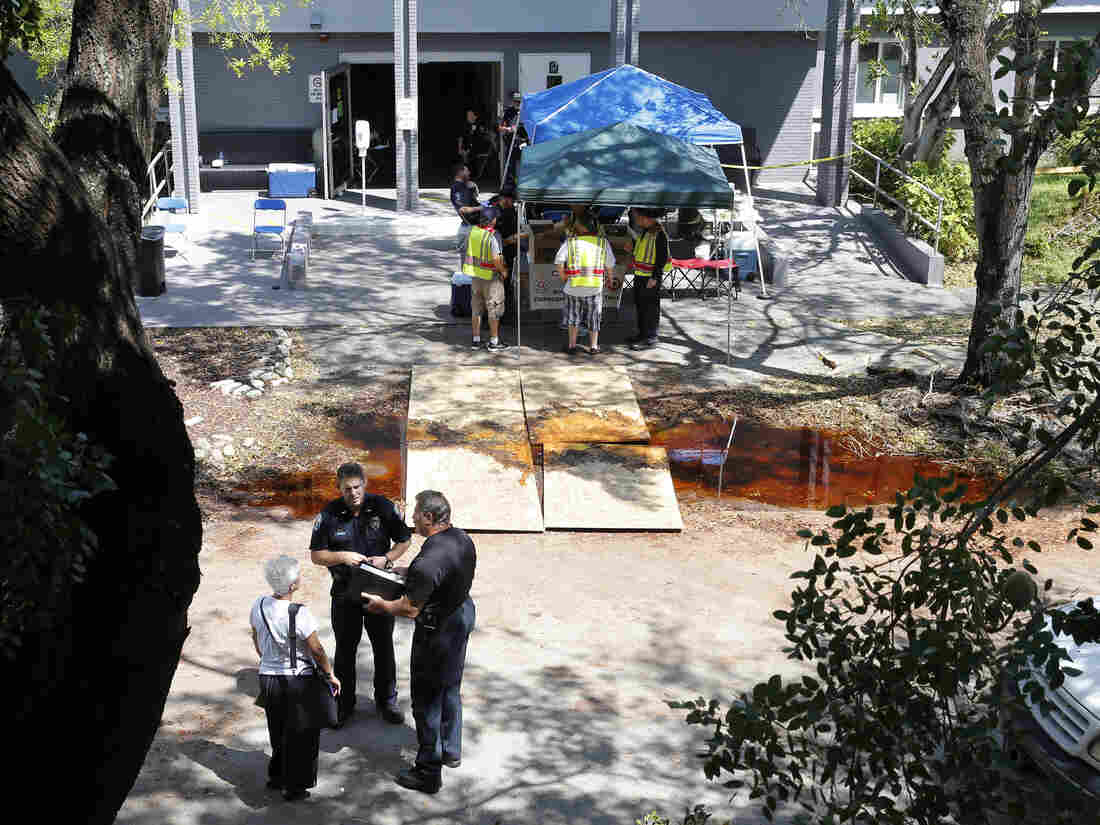 Police officers speak with an employee at the Rehabilitation Center at Hollywood Hills in Hollywood, Fla., on Sept. 13, 2017, the day several patients at the sweltering nursing home died in Hurricane Irma's aftermath. Marta Lavandier/AP hide caption 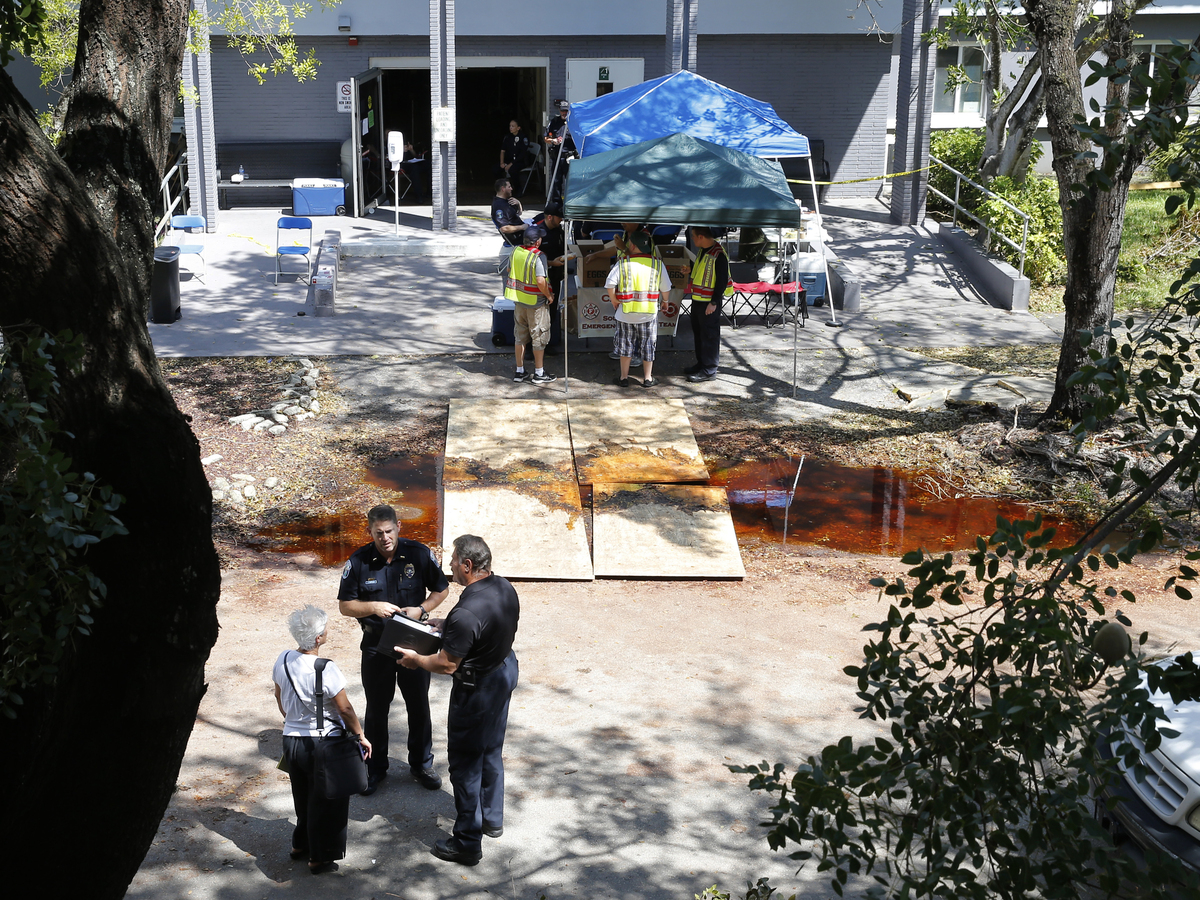 Police officers speak with an employee at the Rehabilitation Center at Hollywood Hills in Hollywood, Fla., on Sept. 13, 2017, the day several patients at the sweltering nursing home died in Hurricane Irma's aftermath.

Carballo and Colin were granted release on $90,000 bail, according to an attorney for the defendants. Meggie was released on $17,000 bail.

The announcement comes a day after police said the four staffers were to face charges following an investigation that has spanned nearly two years. Police on Tuesday say the investigation remains open and they expect to make more arrests in the future.

"I thank the families for their patience and understanding during this very difficult time. The families sitting here today should not have lost their loved ones in this way," O'Brien said.

Hollywood police officials say the investigation into the deaths is one of the most extensive in the department's history.

More than 500 people were interviewed and more than 1,000 pieces of evidence collected, including 55 computers, which police call "instrumental" in the criminal investigation. Police also say they collected more than 400 hours of video to review.

After Irma made landfall on Sept. 10, 2017, the facility's air conditioning system failed. In the following days, staffers set up portable cooling units, including fans and other devices, to keep the sweltering summer temperatures outside from rapidly heating the building.

But by the third day patients began to show signs of distress.

As NPR also reported then, police in Hollywood did not say how hot it was inside the building but confirmed that 158 patients were evacuated to local hospitals.

Staffers at the center came under intense scrutiny for not evacuating residents as temperatures inside the building continued to climb. Some critics point out that a hospital, which was fully functional in the days after Irma passed, was across the street from the facility.

On Sept. 13, 2017, eight patients died. The center was evacuated that same day. But in the weeks that followed, four more patients died.

Police read the names of all 12 victims at the news conference Tuesday.

Staffers at the Rehabilitation Center at Hollywood Hills say they did all they could to keep patients alive.

As NPR has reported, workers say they made numerous calls to the power authority and state authorities, including to then-Gov.Rick Scott, in an effort to get the air conditioning restored. Workers say it was the state authorities that should have acted more quickly.

The Rehabilitation Center at Hollywood Hills closed in the days after Irma and nearly 250 employees were laid off.