Accessibility links
This Digital Sheriff Helps Cities Wrangle Airbnb Rules Cities are struggling to enforce rules around everything from problem party houses to investors pushing up housing costs. An entrepreneur is helping local officials deal with these short-term rentals. 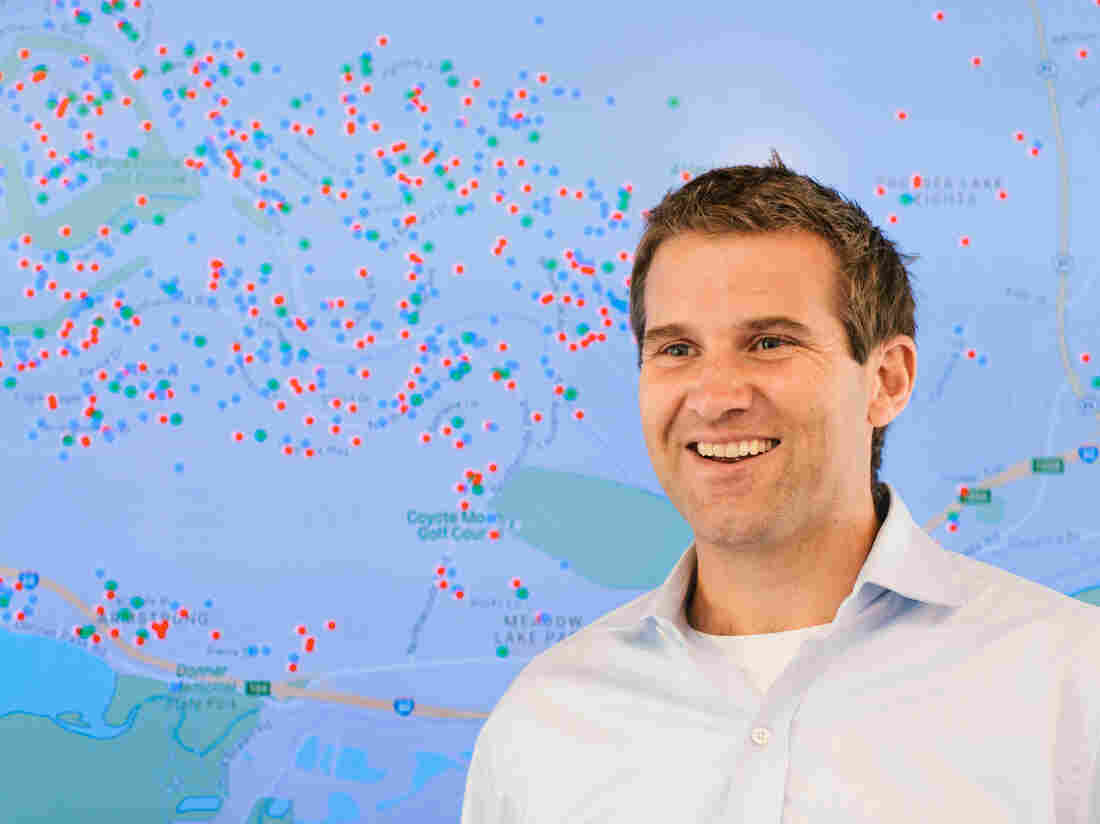 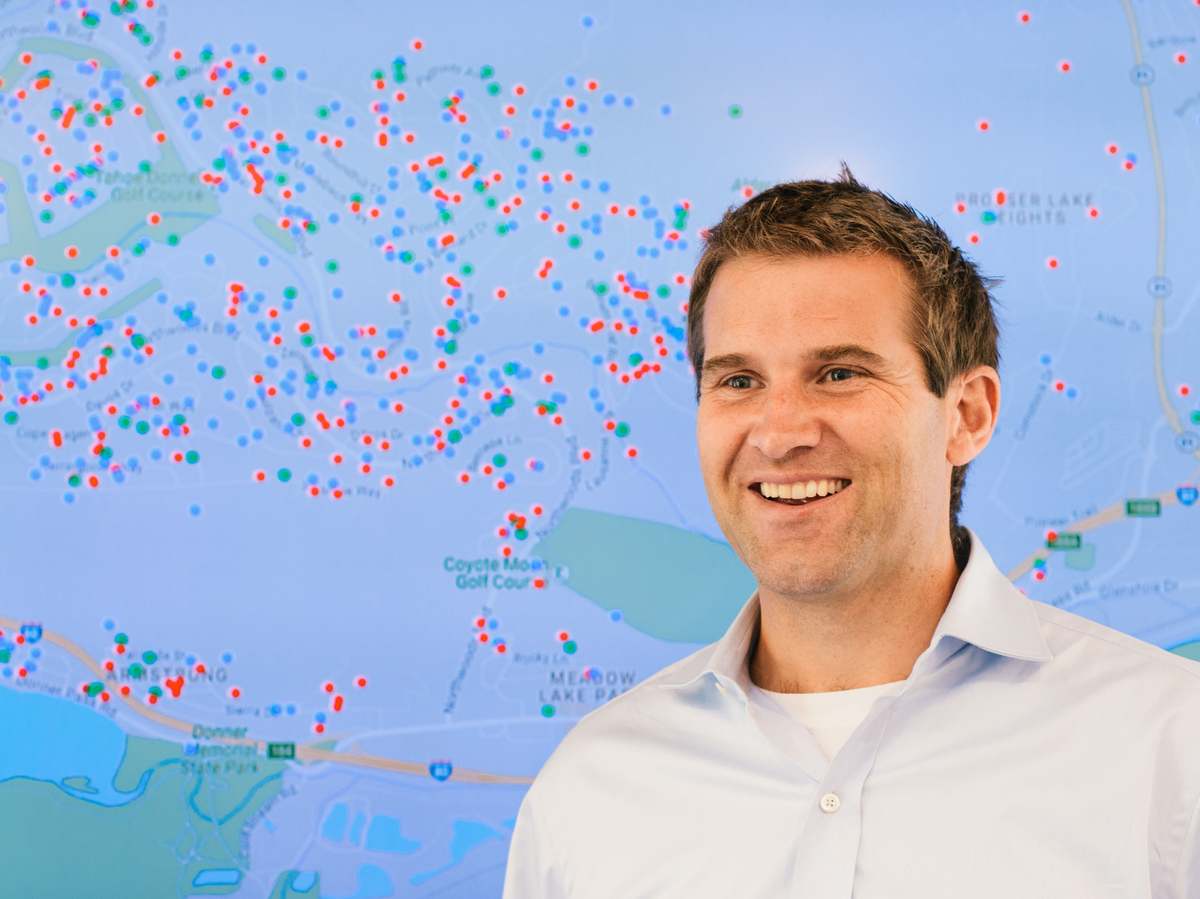 Entrepreneur Ulrik Binzer is helping more than 300 cities and towns in the U.S. and Canada enforce rules for short-term rentals.

Ulrik Binzer used to rent out his house north of San Francisco on Airbnb. It was enough money to pay for his family to fly to Denmark to visit relatives. But then his town suddenly banned short-term rentals.

Binzer says there was no debate — it was just an agenda item. "No one knew about it," he says.

It left him wondering: What's going on here?

That's how Binzer became a new sort of sheriff for the digital age.

Millions of Airbnb-type rentals are popping up in residential neighborhoods across the United States. That leaves cities struggling to enforce rules around everything from problem party houses to investors buying up too many rental properties, which some studies say pushes up housing costs.

Binzer, who works in Silicon Valley, saw an opportunity to use technology to tame the Wild West landscape of short-term rentals.

In 2015, he went to a town meeting and started researching the issue. He realized cities were really struggling to deal with all these short-term rentals.

One of those cities was Nashville, Tenn.

"We had a problem," says Sean Braisted, who works in Nashville's code-enforcement department. For one thing, it was hard to get homeowners to obtain rental permits and pay taxes on their rental income. And Nashville is a big party town, Braisted says.

"We would have problems with essentially party houses that would try to pull as many beds into one house as possible and cram as many people in there," he says. "We've had complaints about people allegedly having sex parties to doing all sorts of things within short-term rental properties."

In residential neighborhoods, Nashville allows these Airbnb-type rentals only for houses occupied by their owners. The goal is to cut down on investor-owned party houses or having too many investor-owned short-term rentals.

But Braisted says the rules were hard to enforce. For one thing, you usually don't see the actual address of a property on these rental sites until you agree to rent it.

Back in California, Binzer realized that for cities trying to enforce these rules, "it was like bringing a knife to a gunfight."

Beyond The Grind: Find Meaning In Travel — Abroad Or In Your Backyard

Cities manage compliance manually, one property at a time, which takes time, he says.

"They essentially go and do a drive-by, or they try to book the property so they can get the address and then they catch them and it's like a sting operation," he says. "You can't do that when you have thousands of these, right?"

Binzer saw an opportunity to use his technology background to help cities get this rapidly growing short-term rental phenomenon under control. He got some software developers on board, and they knocked together a bare-bones startup company.

"We went out and started talking to cities and very quickly got to something like 20 customers" within a couple of months, Binzer says. Today, he says his company, Host Compliance, is working with more than 300 towns and cities across the U.S. and Canada.

Nashville is one of them. The city is using Binzer's technology to see if properties on the short-term rental sites have the right permits. "They crawl the Internet through those sites, and then they match those up with property records, assessor photos of the front of the properties," he says.

Host Compliance uses artificial intelligence software to figure out the address and owner. Then, people renting without a permit are told to get one or stop renting.

And in Nashville, Braisted says it's working. After two years, he says, the city is bringing in 50% more money annually in short-term rental taxes. And the crackdown has found about 2,500 rental operators who were breaking the rules.

Around the country, local officials also worry about short-term rentals boosting the cost of housing. That has squeezed out people like New Orleans resident April Leigh, who owns a neighborhood small business.

"My boyfriend and I were in this house, and it was cheap rent that we could both afford," she says. "It was close to my business, so I could bike or walk there."

She says that in recent years, investors have been buying up a lot of rental properties that locals were living in and have been turning them into Airbnbs.

When that happened with the house she used to live in, she says she and her boyfriend were forced to move. She says it happened to her neighbors too. "People have told me they're the only renters on the block — the rest is all Airbnb houses," Leigh says.

The influx of Airbnbs made it a lot harder for her to find an affordable place to rent, she says. She was so frustrated that after she got kicked out, she decided to leave a message for the next tourists renting the house she used to live in. 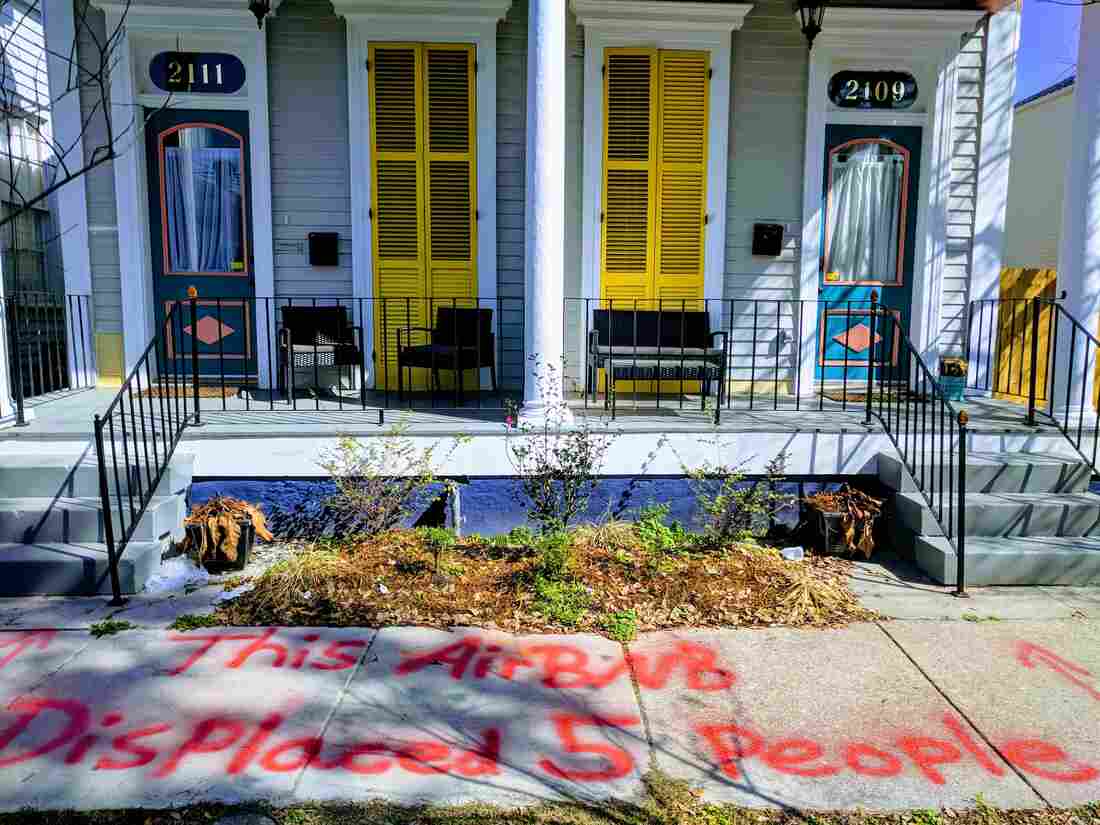 April Leigh spray-painted a message for tourists renting the New Orleans house in which she used to live after she was evicted from it and the new landlord converted it into a short-term rental property. Courtesy of April Leigh hide caption 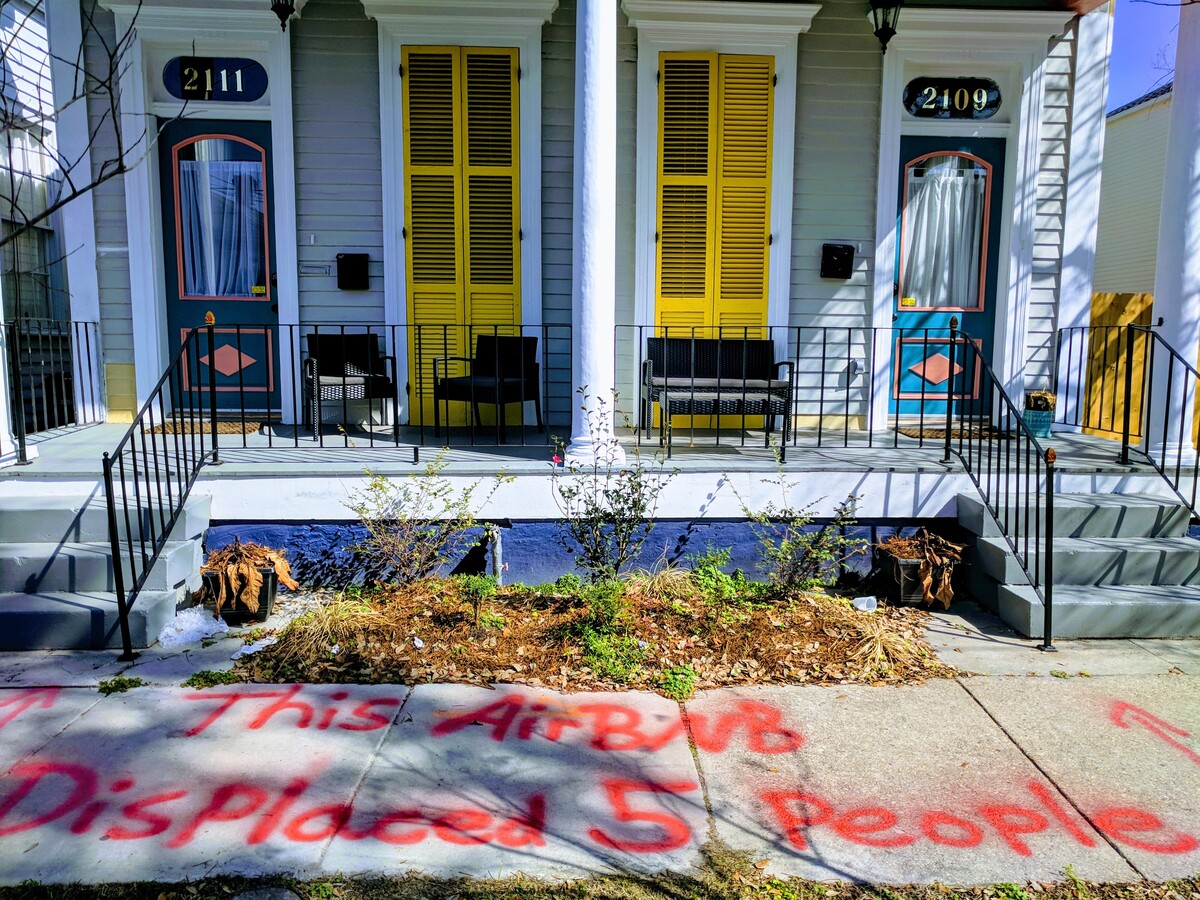 April Leigh spray-painted a message for tourists renting the New Orleans house in which she used to live after she was evicted from it and the new landlord converted it into a short-term rental property.

"I got a can of spray paint and drove straight to the house and wrote on the sidewalk, 'This Airbnb displaced 5 people,' " Leigh says. Her photo of the sidewalk protest went viral.

Lawmakers in cities around the country and in Canada are passing regulations to stop investors from buying up a lot of traditional rental properties and converting them into short-term rentals, Binzer says. And he's helping them enforce those rules.

He notes that Boston, Denver, Los Angeles, Nashville, New Orleans, San Francisco, Seattle, Toronto and Vancouver, British Columbia, have all passed such regulations. "Most of the larger cities in North America faced with some level of a housing crisis are passing these types of rules," he says.

Different cities have taken different approaches. Some say only owner-occupants can do short-term rentals. Others say owners can rent out one property in addition to their primary residence — though Binzer says that's harder to enforce.

For its part, Airbnb says it too is helping many cities to enforce their rules, including Chicago, Seattle and San Francisco.

Airbnb spokesman Christopher Nulty says homeowners who want to rent out their properties, "are able to register with the city through our platform." Nulty says Airbnb then shares that information with the city (with the homeowner's consent) and the city either approves or denies the application. If the person isn't allowed to be renting the property under the city's rules, Nulty says "we have an agreement under which we remove that listing from our platform."

So what does Airbnb think about entrepreneur Ulrik Binzer and Host Compliance helping hundreds of cities crack down on illegal short-term rentals?

Nulty declined to talk about any specific company. But he said, "We just don't think that the best approach here is for cities to turn that responsibility over to another company whose sole responsibility is to tattle on people."

He says there are privacy concerns. And he asks, what's next? Will cities hire companies to check that if you buy a sink at Home Depot, that you've got any required plumbing permits?

Binzer says he knows Airbnb and the other rental sites aren't his biggest fans. "But I think in the long run they all realize that if this is just the Wild West, the pendulum is going to swing the other direction and there's gonna be so many restrictions that it will destroy their business," he says.

Airbnb has gotten into legal battles with cities over, among other things, how much information it needs to hand over for enforcement. Binzer says his company lets cities get around that tug of war and get what they need to enforce the law.