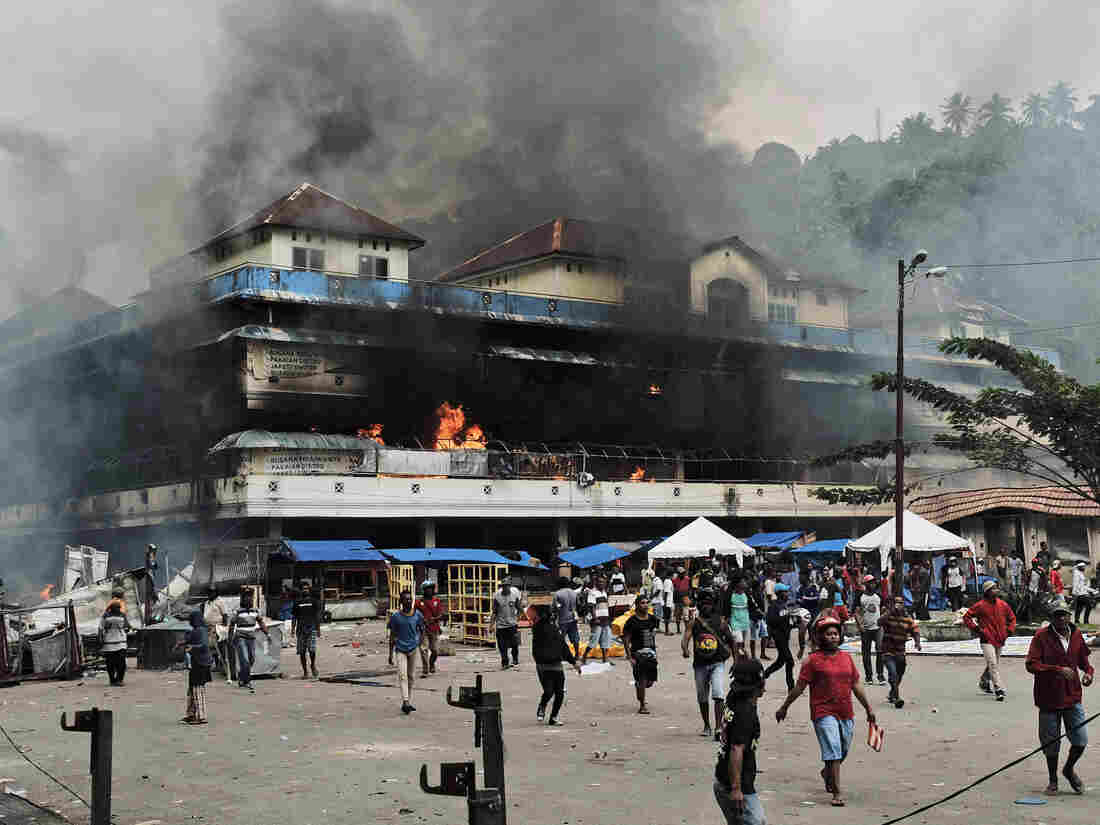 A local market is seen burning during a protest in Fakfak, West Papua, Indonesia, on Aug. 21. Violent protests this month were sparked by accusations that security forces had arrested Papuan students in East Java. Beawiharta/AP hide caption 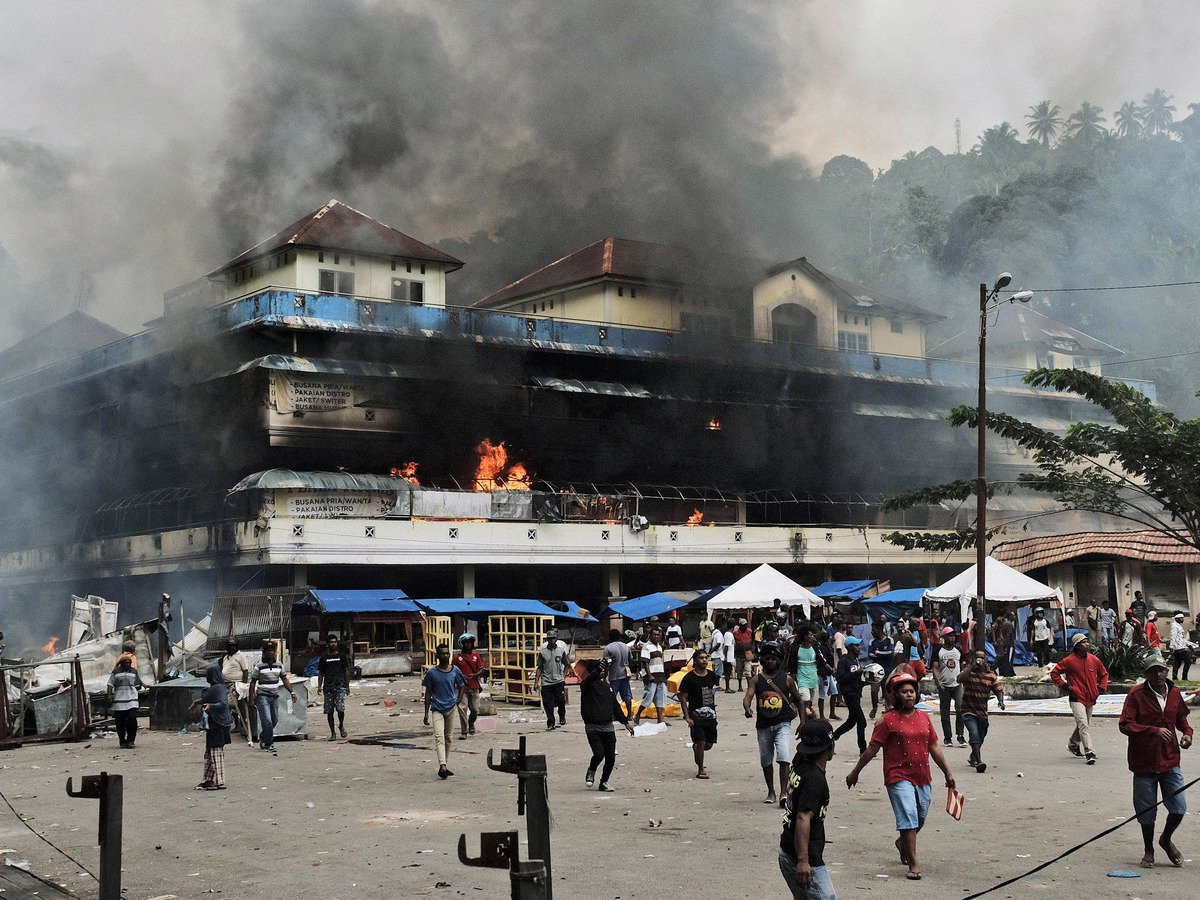 A local market is seen burning during a protest in Fakfak, West Papua, Indonesia, on Aug. 21. Violent protests this month were sparked by accusations that security forces had arrested Papuan students in East Java.

Pro-independence protests in Indonesia's restive Papua and West Papua provinces have resulted in violence for a second week, according to activists and reports from the area, where most Internet access has been shut down since Aug. 21.

Conflicting reports of deaths, injuries and arrests have emerged from the region. On Wednesday, police said two protesters and one police officer had been killed after shooting broke out during a demonstration in the easternmost province of Papua. A pro-independence spokesperson in the province, Victor Yeimo, told NPR that six protesters were shot dead by police during Wednesday's demonstration. Speaking by phone from Jayapura, the capital of Papua province, Yeimo said the number of injured was unconfirmed.

A police spokesman in Jakarta told the Associated Press that one soldier and five police officers were injured in Wednesday's protest.

Wednesday's violence follows days of similar turmoil that saw one demonstrator killed last Friday and others injured and detained over the weekend. Police confirmed the protester's death but denied that any others were injured that day.

"It's not going to stop"

The current tensions erupted after the government on Aug. 17 detained dozens of Papuan university students in East Java for allegedly holding a pro-independence rally. 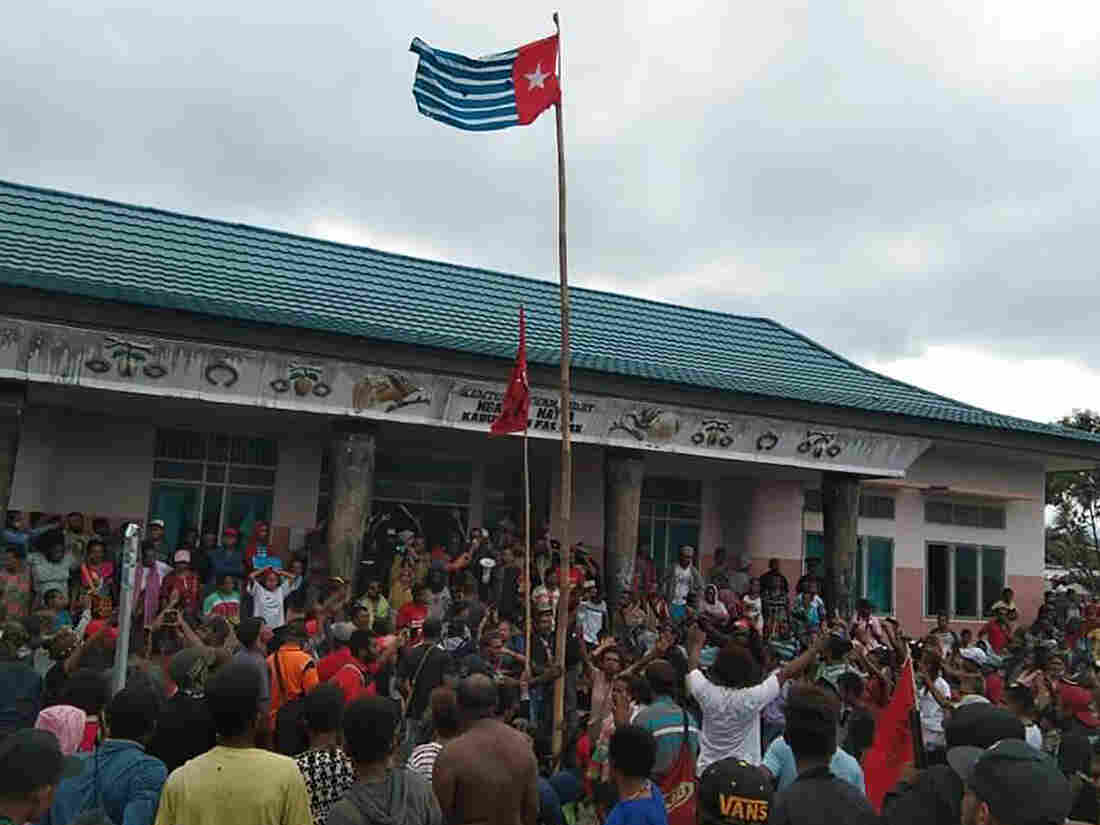 Protesters gather under the banned Papuan flag in the West Papua city of Fakfak on Aug. 21. STR/AFP/Getty Images hide caption 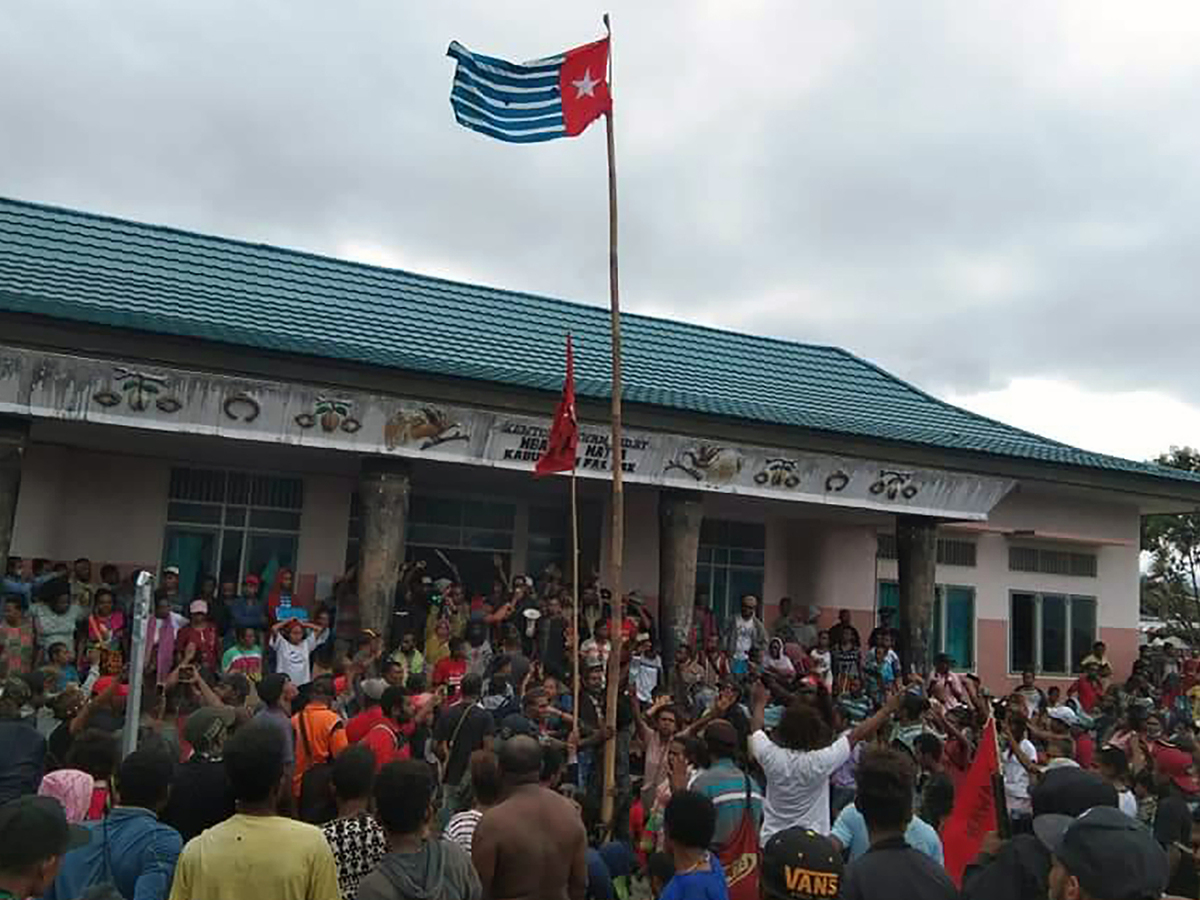 Protesters gather under the banned Papuan flag in the West Papua city of Fakfak on Aug. 21.

Two days later, in response to the students' arrests and reports that nationalist groups had verbally abused them — allegedly calling them "pigs" and "monkeys" — protesters took the streets across the country. In West Papua, some torched a parliament building, prompting the Indonesian government to send over 1,000 troops and hundreds of police to an already heavily militarized area.

Last Wednesday, Indonesia's government shut down cellular and cable-based Internet in Papua and West Papua, two of Indonesia's most resource-rich but least-developed provinces. They share an island with the country of Papua New Guinea and have a combined population of some 3.5 million.

Rights activists say the Internet shutdown is a new tactic to quell pro-independence unrest, which has roiled the region for decades. 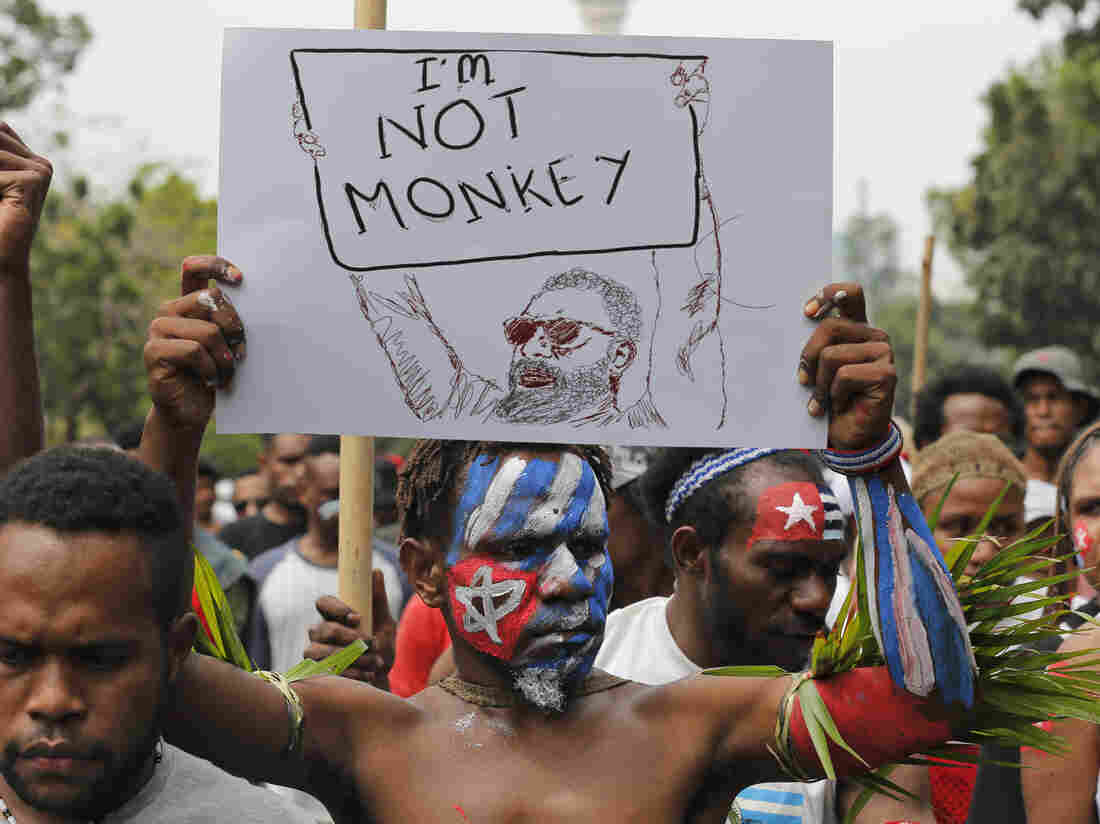 A Papuan student with his face painted with the colors of the separatist flag holds up a poster during a rally near the presidential palace in Jakarta on Wednesday. Protests began last week after reports that Papuan students had been arrested and targeted with verbal abuse, including being called "monkeys" and "pigs." Tatan Syuflana/AP hide caption 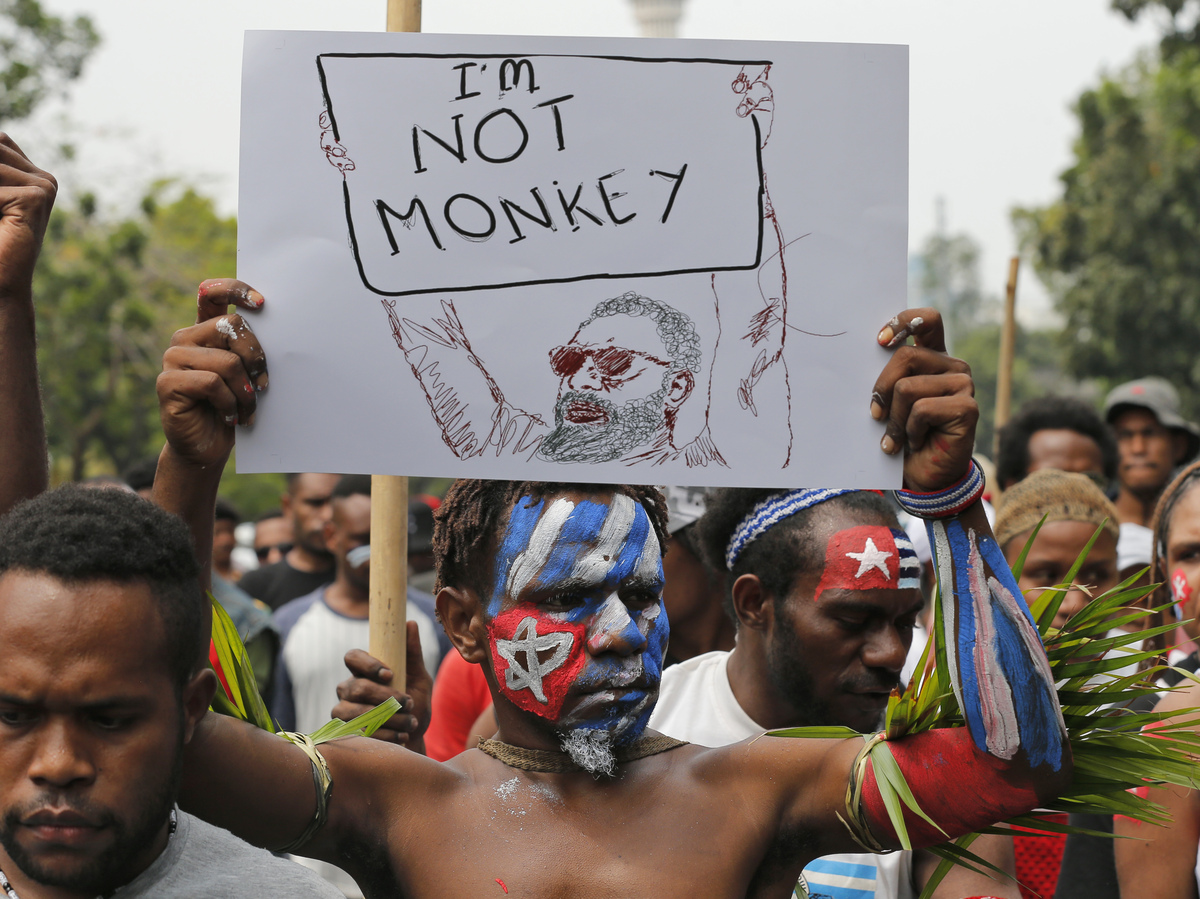 A Papuan student with his face painted with the colors of the separatist flag holds up a poster during a rally near the presidential palace in Jakarta on Wednesday. Protests began last week after reports that Papuan students had been arrested and targeted with verbal abuse, including being called "monkeys" and "pigs."

Indonesian President Joko Widodo called the shutdown "a matter of national security," but human rights groups both in and outside Indonesia have criticized the move, accusing authorities of trying to cover up abuses against protesters.

Journalists and activists tell NPR that a few private WiFi networks and the landline Internet in some government buildings and hotels remain functional. Information that has come out in recent days shows that the protests have grown in size and scope.

Indonesian freelance journalist Febriana Firdaus, based in Jakarta, says the demonstrations have swept from the Papua region's coastal areas into the highlands.

This is the most powerful video of the West Papua uprising so far.

Highlanders in full traditional indigenous regalia chanting and calling during a protest of unprecedented size in Deiyai regency.

Shouts of "Free Papua" can be heard. pic.twitter.com/m0IxdyHjGK

"West Papuan people think there is no hope"

Yeimo, the international spokesperson for the West Papua National Committee, an arm of the region's pro-independence campaign, tells NPR that the mood of demonstrators is "anger." Separatists want a referendum on Papuan independence from what they call Indonesian "occupation," a goal they've supported since the Netherlands relinquished the region to Indonesia in 1962. 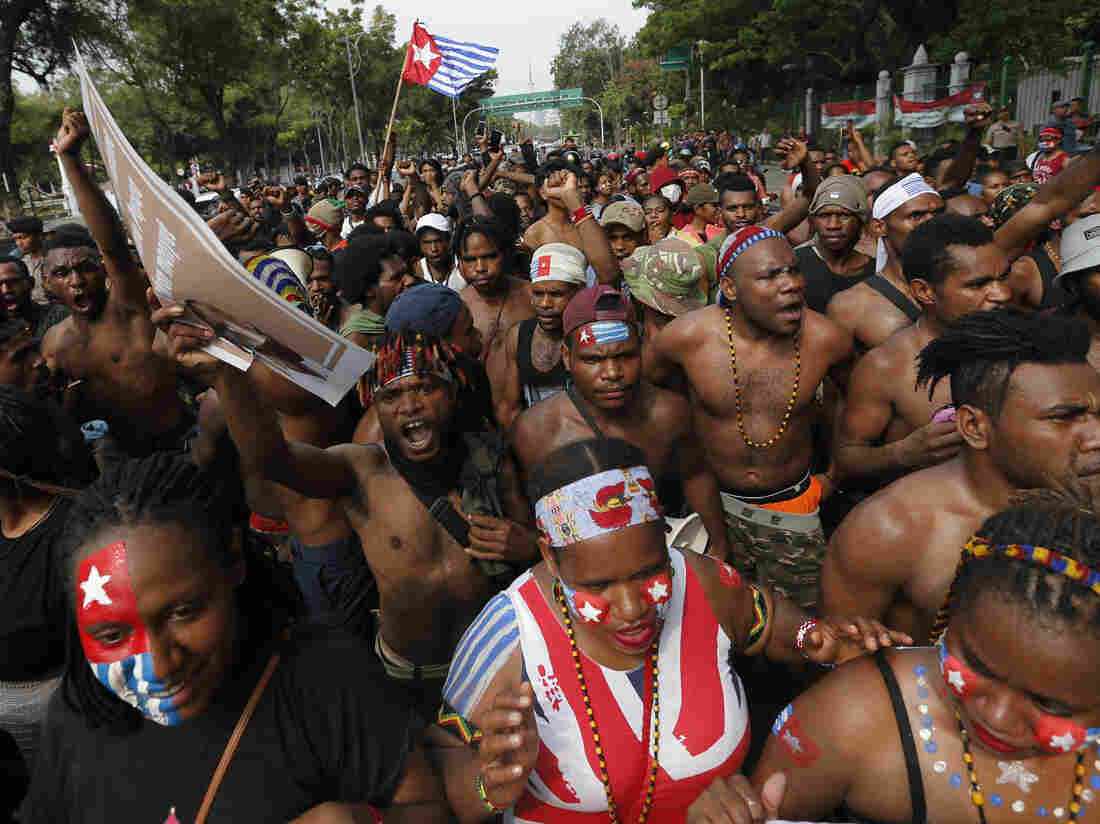 Papuan students rally near the presidential palace in Jakarta, Indonesia, on Wednesday. A group of West Papuan students in Indonesia's capital staged the protest against racism and called for independence for their region. Tatan Syuflana/AP hide caption 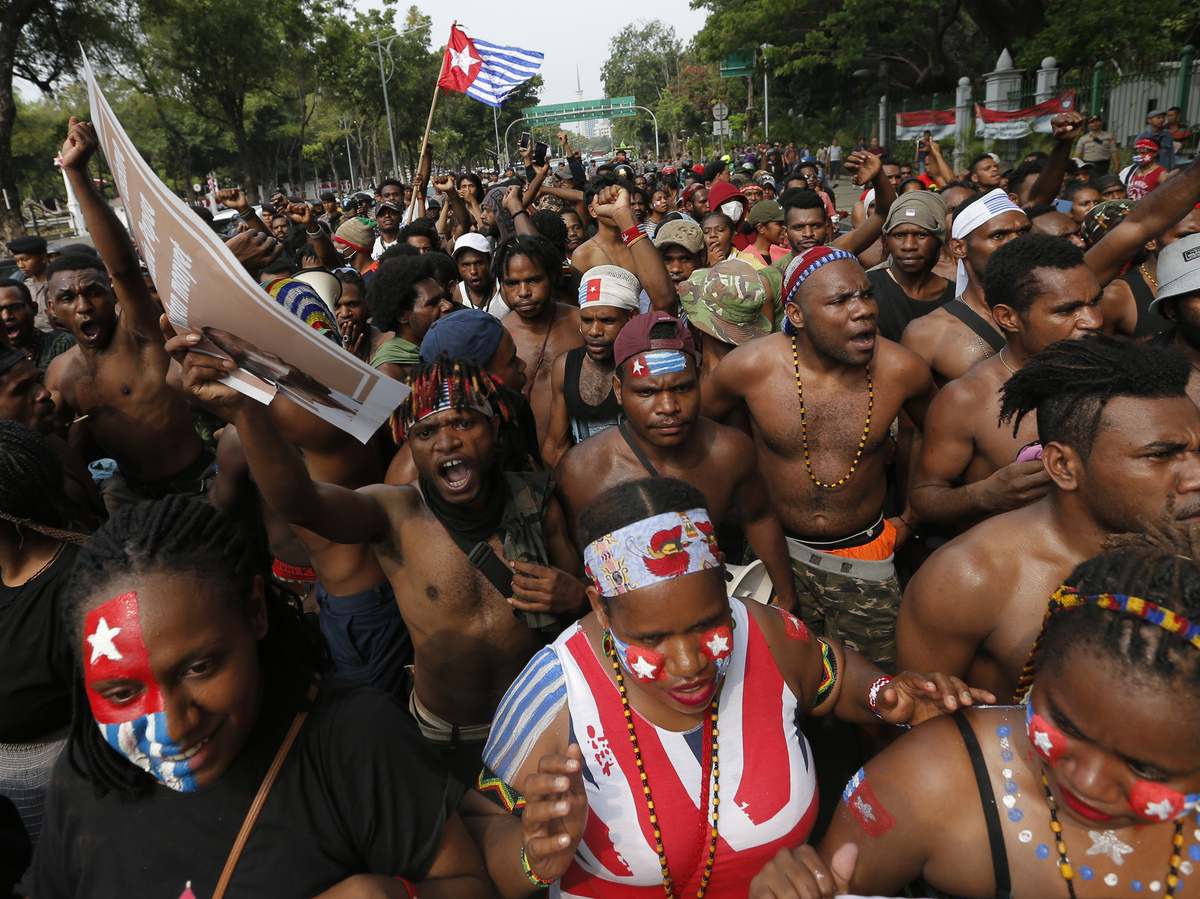 Papuan students rally near the presidential palace in Jakarta, Indonesia, on Wednesday. A group of West Papuan students in Indonesia's capital staged the protest against racism and called for independence for their region.

Indigenous Papuans are ethnically distinct from many other Indonesians and often experience discrimination, Yeimo says. In "every sector of life in West Papua, there is racism," he says. Since the region became part of Indonesia, people from other parts of the country have migrated in and have come to dominate the provincial economy, Yeimo says.

Starting 50 years ago with the Act of Free Choice, which made the Papua region a territory of Indonesia, rights activists say decades of on-and-off violence between government forces and supporters of the umbrella independence campaign known as the Free Papua Movement, which includes Yeimo's group, has killed and displaced thousands of Papuans.

Earlier this month, the Pacific Islands Forum, an intergovernmental organization of Pacific nations, noted "the reported escalation in violence and continued allegations of human rights abuses" in the Papua region and urged peaceful resolution of the conflict, an issue that has been on the forum agenda since 2000.

"I think that West Papuan people think there is no hope in Indonesia because many West Papuan[s] have been killed, arrested and have no freedom of expression," says journalist Victor Mambor, who grew up in West Papua and is the senior editor the province's Jubi Daily.

Human rights groups over the years have documented multiple incidents of suppression of freedom of speech, unlawful killings, rape and torture by government security forces — leading some observers and experts to accuse the Indonesian government of running a police state in the region.

A new solution to an old problem?

While Indonesia has previously limited access to certain social media and messaging apps, the government's Internet shutdown in the Papua region is unprecedented, activists say. "The government says they are doing it to prevent hoaxes," says Damar Juniarto, executive director of SAFENET Voice, an Indonesian nonprofit that focuses on digital rights in Southeast Asia. But ordinary Papuans are the ones getting hurt, he says.

"It is impacting not only freedom of expression. It's also affecting the economy ... access to public services, and aspects of education where students cannot use the Internet," he says.

"Given the track record of the Indonesian state security forces against the West Papuan people, this is a very emergency situation," says Veronica Koman, a Jakarta-based human rights lawyer who works on West Papua issues. "However, it has a different tone of sense of urgency because West Papua has no press freedom and heavy presence of security forces."

Koman has co-written an urgent appeal to the U.N. Special Rapporteur on Freedom of Expression, claiming that the Internet shutdown in Papua and West Papua is illegal.

"It definitely has breached international law," Koman says. "It also violates Indonesian constitution because under our constitution, we citizens have the right to access information and also freedom of expression and it has violated not just West Papuans' rights but even Indonesian people outside West Papua."

Indonesia follows in the footsteps of other Asian countries, India and Myanmar, in blockading the Internet in restive areas under their control. India-controlled Kashmir has not had Internet for over three weeks, since India revoked the contested region's special status on Aug. 5. In Myanmar, Internet service has been shut down in that country's restive Rakhine State for over two months, amid tensions between the military and a Buddhist insurgency.