Accessibility links
In 'Midwestern Strange,' A Tour Of The Utterly Bizarre And All-Too-Human B.J. Hollars' book is both a quirky primer on some of the Midwest's oddest stories — and a fresh perspective on small-town culture.

In 'Midwestern Strange,' A Tour Of The Utterly Bizarre And All-Too-Human

In 'Midwestern Strange,' A Tour Of The Utterly Bizarre And All-Too-Human 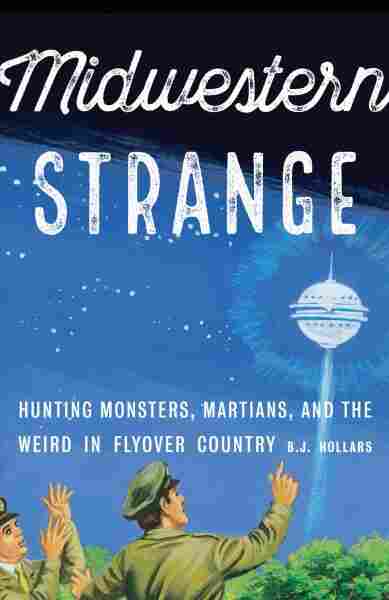 Hunting Monsters, Martians, and the Weird in Flyover Country

On Feb. 21, 1995, the Weekly World News, a supermarket tabloid, published a story about my hometown of Broken Bow, Neb., population 3,800. Or, rather, about a hermit who supposedly lived in a remote cabin several miles north.

"Man famous for horn on his head is dead at 67," the headline claimed. His name was Horace Easterwood, and none of us — not my friends, not my family, not the manager of the local radio station, who quickly inquired on air — had ever heard of him. But apparently he was "a real gentleman" and now he was dead, and what was merely a bump on his head at birth had since grown into a 40-in. horn "made up of a protein called keratin — just like the horns of goats and cows." The News quoted an unnamed "longtime friend," who claimed Easterwood "used to walk around in that old straw hat with a hole cut in the top so his horn could stick through."

Weird as the story seemed, it was about to grow weirder: Locals started calling into the station. They didn't know him, they said, but they had a friend who did, or a cousin, a former acquaintance of one kind or another. Gradually Broken Bow changed its mind. Some of us did remember old Horace Easterwood after all. Soon the Horace J. Easterwood Society was born, and the mayor declared a day in the horned hermit's honor, and residents countywide attended a ceremony at the country club for the placement of a Horace Easterwood memorial stone that read: Here lies Horace with a horn on his head. We never even knew him and now he is dead.

In the end, what's more bizarre — the original tabloid tale, or the community's whimsical reaction? That a country gentleman might grow a 40-in. horn, or that a small town in central Nebraska would pay to engrave a stone in his honor? "Because as strange as unexplained phenomena can seem," writes author B.J. Hollars in his latest book, Midwestern Strange: Hunting Monsters, Martians, and the Weird in Flyover Country, "none are half as strange as humankind's interest in them."

Though Easterwood doesn't make any cameos, the case files in Hollars' colorful compendium are every bit as folksy, every bit as strange: a werewolf; a giant turtle; a mothman; a Wisconsin plumber visited by aliens flipping pancakes in their UFO; a lizard-ox hybrid called "The Hodag." The list continues, each case granted its own chapter, most of them set in archetypal small towns similar to Broken Bow. But while Hollars makes sure to frolic in the fiction, to swim deep into the strange, he pays particular (if never quite enough) attention to the other half of the equation: The all-too-human feedback, the terrestrial roots of these enduring myths, the motives behind the mysteries.

"Things become sticky when we try to find truth in the in-between," he writes. "Though to my mind, this is precisely the space where truth thrives, somewhere between the 'evidence' and our perception of that evidence."

Equal parts essay, journalism and memoir, Midwestern Strange is a breezy read, often very funny, and occasionally — at its best — illuminating. Serious cryptozoologists, ufologists, and devotees of the strange may find Hollars' topical approach to the oddities themselves unfulfilling, but for those just entering the waters it's both a quirky primer on some of the Midwest's most bizarre stories and a fresh perspective on small-town culture. As a literary pursuit, it's the latter half of this equation that rings the loudest, however, and I often found myself wishing that Hollars had spent less time investigating the veracity of the mysteries themselves — a mostly futile effort — and more diagnosing what these stories mean to the communities and individuals that have so long nourished them.

To that end, Hollars' chapter on the "Hodag" of Rhinelander, Wisconsin, is perhaps the most realized, organically reflecting how these supernatural tales can affect — and are affected by — the community's very DNA. In Oct. 1893, a prosperous timber cruiser named Gene Shepard was ambling through the Wisconsin North Woods when he happened upon a foul-smelling creature like nothing he'd ever seen. It was roughly 7 ft. long and 185 lbs., he claimed, with spikes on its back, bright green eyes and fire-spouting nostrils, and it smelled like "a combination of buzzard meat and skunk perfume." Once back to Rhinelander, Shepard rallied a group of hunters to capture the beast. They brought canines and firearms, but only after resorting to dynamite, he said, were they able to finally bring it down.

Shepard's tall tale lingered locally for several years, but in 1896, sensing potential for a wider audience at the Oneida County Fair, he carved a wooden Hodag and revised the ending of his story for the front page of the local newspaper. In the new version, the hunters didn't kill the beast, but instead tranquilized it with chloroform and wheeled it home. During fair week, Shepard offered visitors a brief glimpse of the now infamous Hodag, crudely animated by a series of hidden wires.

"Mindful that mystery is often better than the reveal, Shepard did his part to create the conditions to ensure that his Hodag remained conveniently out of sight," Hollars writes. "He held onlookers to a safe distance, kept the lights low, and allowed visitors only the briefest, neck-craning peek."

The Hodag is entertaining folklore, but Hollars delivers much more here than a vivid recapitulation. He gives us a community portrait through the lens of its mascot: the rise and fall of the North Woods timber industry, the mayor's re-enactment of the Hodag tent show, the often vandalized Hodag statue outside the Chamber of Commerce and the more than 50 local businesses that have co-opted the beast for profit. [Note: The local candy store sells "Hodag poop."] And he dives deep into the real Gene Shepard — not the simple outline of a late-19th century charlatan, but the profile of a drunken father, a violent husband, a man whose sideshow act derailed his familial duties. The final product is a nuanced case study of the stories we tell ourselves as a community: the importance of a common lore, and the sins we sometimes bury beneath it.

Oddly enough, Midwestern Strange treads the most novel and gripping terrain when it ditches the mystery and returns to the everyday, to Main Street — to us. Hollars has a tendency to soliloquize about the virtue of keeping an open mind, about the nature of scientific inquiry, about the professional perils of paranormal investigation, but too often, these moments fall short of revelatory. It's when Hollars retrains his eye on his small-town Midwestern milieu that Midwestern Strange shoots fire from its nostrils and truly comes alive.

"It didn't hurt that the people of Rhinelander wanted to believe — at least in the beginning," he writes. "After all, what town doesn't want to be home to a monster? Or anything, for that matter, that had the power to make it unique."

Read an excerpt of Midwestern Strange