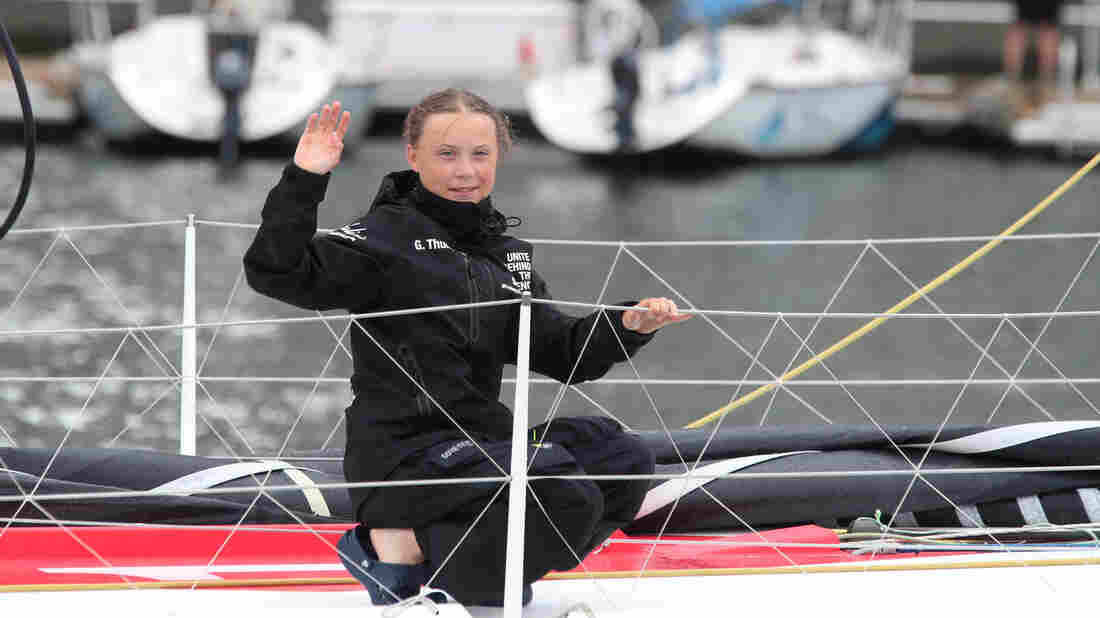 Greta Thunberg, a 16-year-old Swedish climate activist, arrived in New York Wednesday aboard a boat rather than a plane to emphasize the need to reduce carbon-emission damage to the planet. Mary Altaffer/AP hide caption 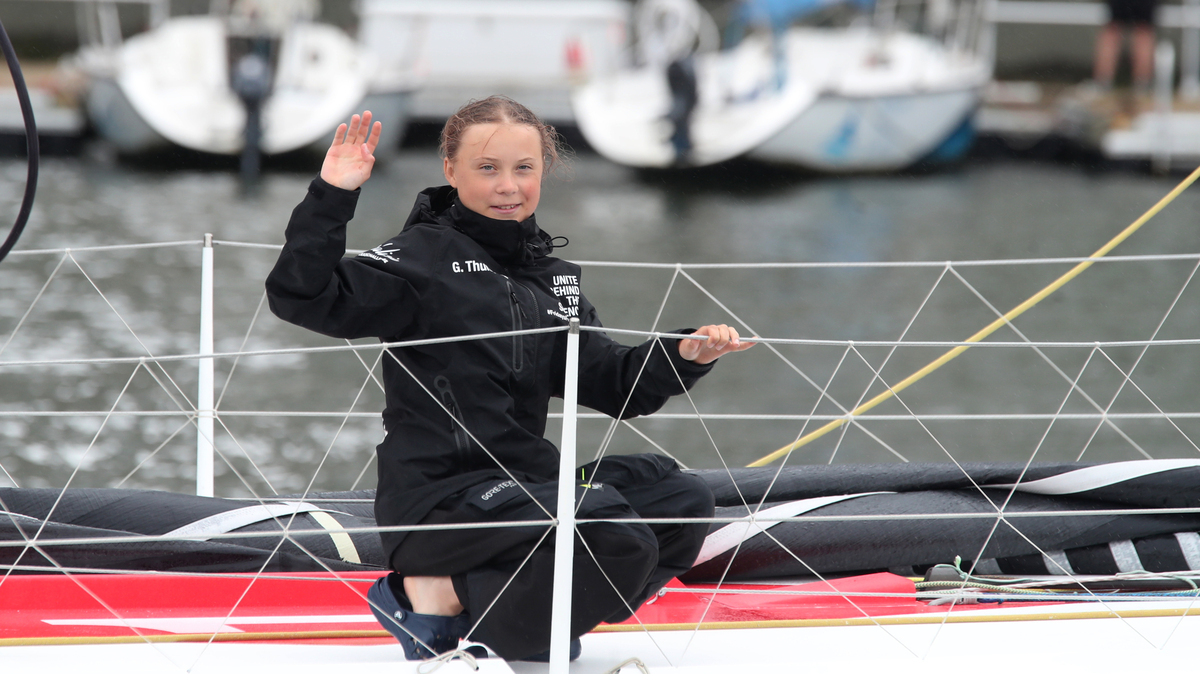 Greta Thunberg, a 16-year-old Swedish climate activist, arrived in New York Wednesday aboard a boat rather than a plane to emphasize the need to reduce carbon-emission damage to the planet.

After a two-week journey sailing across the Atlantic Ocean, 16-year-old Swedish climate activist Greta Thunberg arrived in New York on Wednesday at a marina in Lower Manhattan.

Thunberg stepped off the emission-free racing yacht that brought her and held a news conference a few minutes later, saying, "The ground is still shaking for me."

Nevertheless, Thunberg says she didn't feel seasick once during the trip, despite rough weather that delayed her arrival one day.

Asked if she had a message for President Trump, who has expressed skepticism about the science behind climate change, Thunberg said, "If no one has been able to convince him about the climate crisis — the urgency — then why should I be able to do that?"

Thunberg said she hopes, instead, to spread awareness among Americans about what she calls "the climate crisis."

The teenage activist, known for promoting school strikes by climate-aware students, says she plans to rest for a few days and looks forward to eating fresh, instead of freeze-dried, food again. She plans to join other activists for a climate protest in front of the United Nations on Friday.

Thunberg is in the U.S. for the United Nations Climate Action Summit and says she sailed to avoid the greenhouse gas emissions that come with flying on a commercial jet.

Thunberg documented her journey on social media, including posts in rough seas with waves crashing over her.

Day 12. We are getting closer to the North American mainland. Rough conditions, but downwind sailing. pic.twitter.com/n9huwHUSGI

Thunberg says she first learned about climate change when she was 8 years old and became very concerned about the future of humanity. At age 11, she says, she was depressed and stopped talking and eating.

"Later on I was diagnosed with Asperger's syndrome, OCD and selective mutism," she told a crowd gathered for a 2018 TED Talk in Stockholm. "That basically means I only speak when I think it's necessary. Now is one of those moments."

On Aug. 20, 2018, Thunberg began skipping school and protesting by herself outside Sweden's parliament. She called it a school strike and demanded that adults do more about climate change.

Now, just one year later, students hold hundreds of school strikes every Friday around the world. Thunberg also has been nominated for a Nobel Peace Prize, addressed the United Nations climate conference in Poland and met Pope Francis.

The teenager has a knack for making the complicated issue of climate change sound simple. For that she credits being on the autism spectrum, calling it a gift because it helps her see issues more starkly.

"If burning fossil fuels was so bad that it threatened our very existence, how could we just continue like before? Why were there no restrictions? Why wasn't it made illegal?" she asked in her TED Talk.

Thunberg's activism has attracted critics. Conservative French lawmakers boycotted a speech by Thunberg this summer and mocked her as a "prophetess in shorts."

Thunberg shot back on Twitter, "I am indeed 'deeply disturbed' about the fact that these hate and conspiracy campaigns are allowed to go on and on and on just because we children communicate and act on the science."

Still, many teenagers around the globe are attracted to Thunberg's message, and they are showing up in the streets.

Last March, students around the world staged a climate strike modeled on Thunberg's school strike. Just about every U.S. state had an event, even in politically conservative areas.

Freddy Finney-Jordet, 17, organized a protest on a street corner in downtown Bend, Ore. He says he was inspired by Thunberg's determination.

"She kind of looks in the camera and has this look of, 'I'm doing this. Nobody can stop me,' " Finney-Jordet says.

Before last spring, gun control and LGBTQ issues were his priorities. "After that protest, which at first I thought was going to be kind of a one-off thing for me, I started taking a look at exactly how severe the climate crisis was, and that's been my focus ever since," he says.

Thunberg's fans will be watching as she joins protests connected to the U.N. Climate Action Summit and then addresses the summit.

She also plans to visit Canada and Mexico before traveling to Chile for a climate conference in December. Thunberg's family says she's taking a sabbatical from school this year to focus on her climate activism.