Accessibility links
Elizabeth Warren Is On The Rise — Can She Beat Trump? After a summer that included two strong debate performances, the Massachusetts senator has seen a rise in fundraising, polls and crowds. But can she win it all? 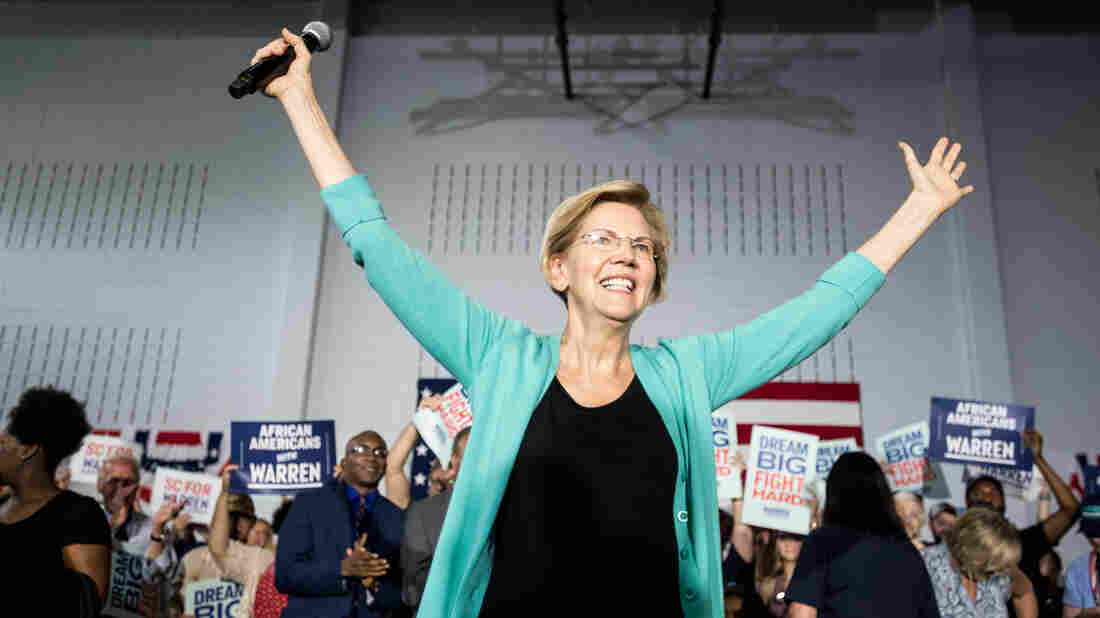 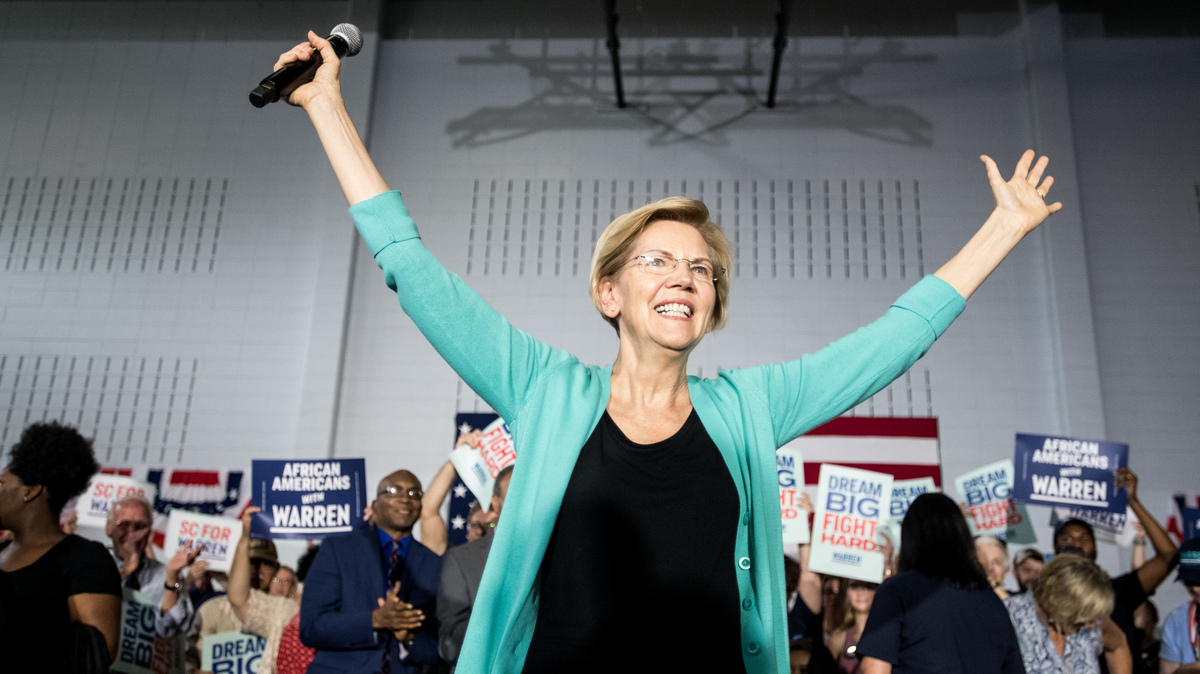 Back in April, things looked a little different in the Democratic presidential primary.

Elizabeth Warren's first-quarter fundraising was disappointing; she was eschewing big-money fundraisers, and her campaign was spending a lot — 87 cents of every dollar it was taking in on 160 or so staffers in early states.

Setting up a big campaign was starting to look like a high-risk gamble that wasn't paying off for the Massachusetts senator. She was not polling very well — down around 6%, in fifth place — and struggling to get out of Vermont Sen. Bernie Sanders' shadow as they competed for the progressive left.

But times have changed. Warren is now surging. She has plugged away with plans, retail campaigning (more than 45,000 selfies so far) and two solid debate performances. As a result, she's raked in $25 million (still without big-money fundraisers) and more than doubled her support (polling consistently second or third nationally). And on Sunday, she drew her largest crowd of the campaign yet — 15,000 in Seattle.

That even got the attention Monday of President Trump. Rising to his focus is perhaps one of the better weather vanes of who's doing well in the Democratic primary.

They do stories so big on Elizabeth “Pocahontas” Warren’s crowd sizes, adding many more people than are actually there, and yet my crowds, which are far bigger, get no coverage at all. Fake News!

Voters on the campaign trail continue to say they like Warren, but they aren't sure she can win. It's something researchers and Democratic strategists think she can get past, and they say her rise might be proving the naysayers wrong already.

"She's so good at explaining her ideas in a way that makes sense to the audience," said Karen Finney, a Democratic strategist who worked on the Hillary Clinton presidential campaign and Stacey Abrams' Georgia bid for governor but is not currently affiliated with any presidential campaign. "And she's winning people over; the challenge will be all the money that will be spent to make her ideas sound scary."

Debbie Walsh, director of the Center for American Women and Politics at Rutgers University, said the questions about Warren's electability are something of a self-fulfilling prophecy.

"In some ways, it seems like it's a story that is self-perpetuating," Walsh said. "There are a lot of people who say they're enthusiastic about her, but afraid others aren't — and that creates this notion that she or a woman in general won't become electable." 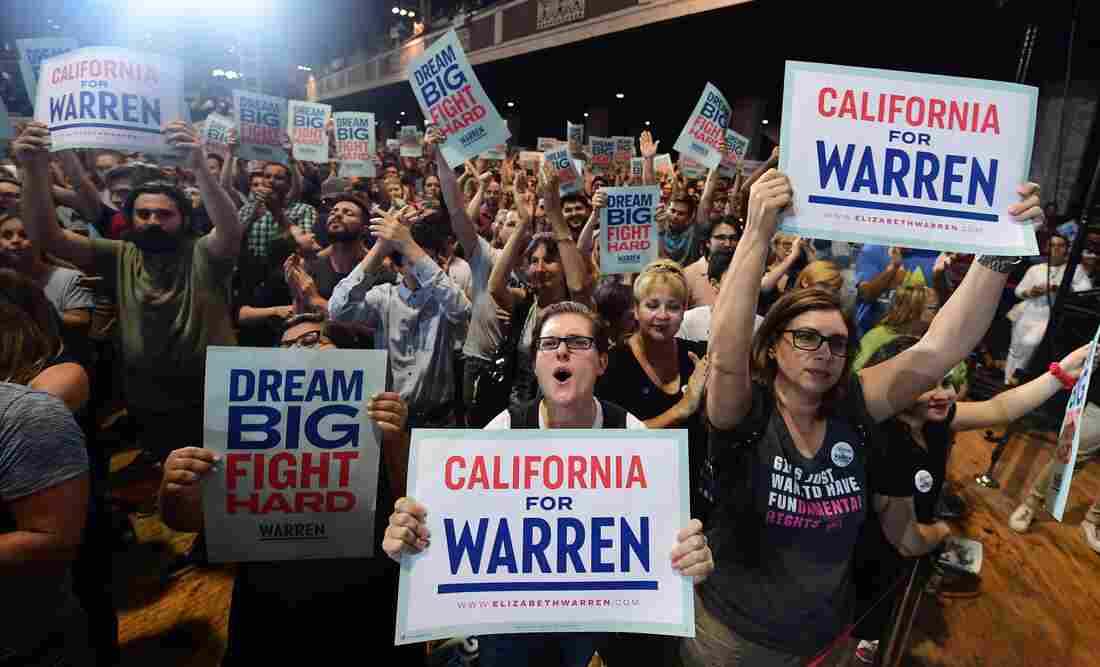 There's evidence that Democratic voters are warming up to Warren. The more they see her, the more they seem to like her. Warren has now leapfrogged Biden and Sanders as the candidate with the top net-favorability rating. 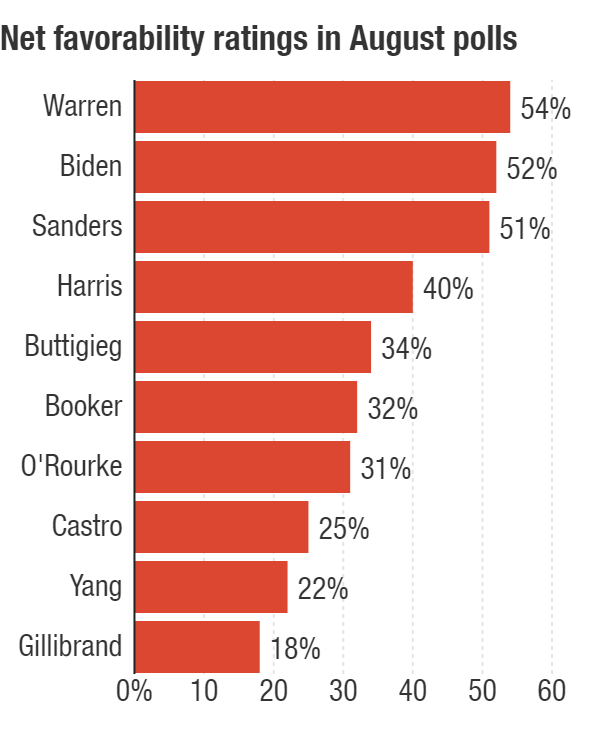 What's more, since May, Warren has gotten more popular while Biden has gotten slightly less popular, and Sanders is about where he's been. More Democrats have an opinion of Biden and Sanders than they do of Warren, meaning Warren has some room to grow.

Democratic polling has also found Warren is Democratic voters' "magic-wand choice," according to a survey from Avalanche Strategy. In other words, she may not be leading in the polls, but she's the one more Democrats want to actually be president if they could pick someone.

Biden led in the "horse-race choice" with 29%, Sanders was second with 17%, and Warren was third with 16%. But when it came to asking them who they would make president with a "magic wand," Biden dropped 10 points to 19%, and Warren jumped 5 points to 21%.

The poll was conducted before the first rounds of debates, and Democratic voters gave Warren top marks for her performance in them.

The poll, however, also found some doubt among Democratic voters — almost 90% said it was "extremely important" to beat President Trump. But their confidence that a Democrat would win was a different story.

What explains this gap? Largely gender.

Who's Running For President? Meet The 2020 Democrats

The poll asked respondents what their "magic wand" candidate could do to make them more electable. The researchers "looked specifically for mentions of many qualities frequently discussed as potentially driving electability including ideology, age, race, sexual orientation, and gender. ... Gender is mentioned the most of any factor."

And get this: "Among the respondents who mention gender, 69% are female."

"I'm not sure a woman can beat Trump. Honestly the misogyny and racism in this country right now is heartbreaking. I hope one day she's president though. She is amazing," said a 39-year-old female from Kentucky.

"I don't know, I don't think men will vote for her or any woman," said a 75-year-old female from North Carolina.

Why Progressives Think Joe Biden Is Not 'Electable'

Part of Warren's challenge — and opportunity — is to convince women that she is electable. Women have been a driving force behind the "resistance" to President Trump, they were the fuel to taking back the House in the 2018 midterm elections, and they make up a strong majority of Democratic voters. In the 2016 primary, for example, women made up 58% of Democratic primary voters and caucusgoers, according to exit polls.

It's a similar potential path for President Barack Obama's victory over Clinton in the 2008 primary. Key to his win was convincing African Americans that white voters would back him. After winning the Iowa caucuses, which were more than 90% white, Obama took off with black voters, leading to his crucial victory in South Carolina.

Michiah Prull, CEO of Avalanche Strategy and the former field director of Obama's Florida campaign in 2012, points out that Warren seems to be starting to convince Democrats that she can win.

"Her rise is very likely due to an increased belief that she is viable," Prull said. "It really is that perception of other people's perception. It's a concern that other people would not support a female candidate. If we see Warren really rising, that likely indicates a shift in how people are perceiving how electable she is."

A lot of the trepidation about whether Warren can win stems from the results of the 2016 election, where Hillary Clinton lost to President Trump, despite winning 3 million more votes. That's something, Walsh said, that is short-sighted.

"It's this idea that women are risky because one woman lost her election for president of the United States," Walsh said, "and yet we're looking back at an election like 2018, where Democrats did pretty well by having women candidates. They had a pretty good return on investment — women were responsible for flipping the House from red to blue."

Finney points out that Clinton's run, as the first woman to be a major-party nominee, may have actually helped lay the groundwork that would help a woman win the White House in the future. "There's something different about being the second, not the first," Finney said. "As the first to run and win the nomination, Hillary bore a lot of the brunt of and showed it was possible."

Walsh agrees, noting that if Warren were to win the nomination, she would "have the benefit of having a woman run before. Hillary Clinton did not."

But, above all, Warren just isn't Clinton. "At the beginning," Walsh said of Warren, "there was this narrative of her being 'school marm,' and that's faded, because she comes bounding out, in this just enthusiastic, whatever-your-problem-I've-got-a-plan-for-that way. Enthusiasm exudes from her."

Elizabeth Warren Has A Plan — To Get Personal With Voters

Clinton, on the other hand, "had built more of a protective barrier between herself and the public — and some of that is totally understandable," Walsh noted, given attacks over decades from the right. But "there was a cautiousness about her that you don't necessarily feel with Elizabeth Warren."

There are still lots of questions about Warren's candidacy – in particular, how will she handle the inevitable scrutiny — from all sides — that comes with a rise in the polls? But Walsh thinks Democrats should focus on a different "e" word over electability — enthusiasm.

"There is this panic mode on the Democratic side to do whatever it takes to win the election," she said. "But I don't know if at the end of the day, someone lukewarm does it and gets someone to turn out at the polls."