Accessibility links
Democratic Debate Rules: As Field Narrows, Controversy Sure To Grow The shrinking field will please those who worry about Democrats' chances of defeating President Trump. But some candidates are already complaining party leaders are trying to manipulate the process. 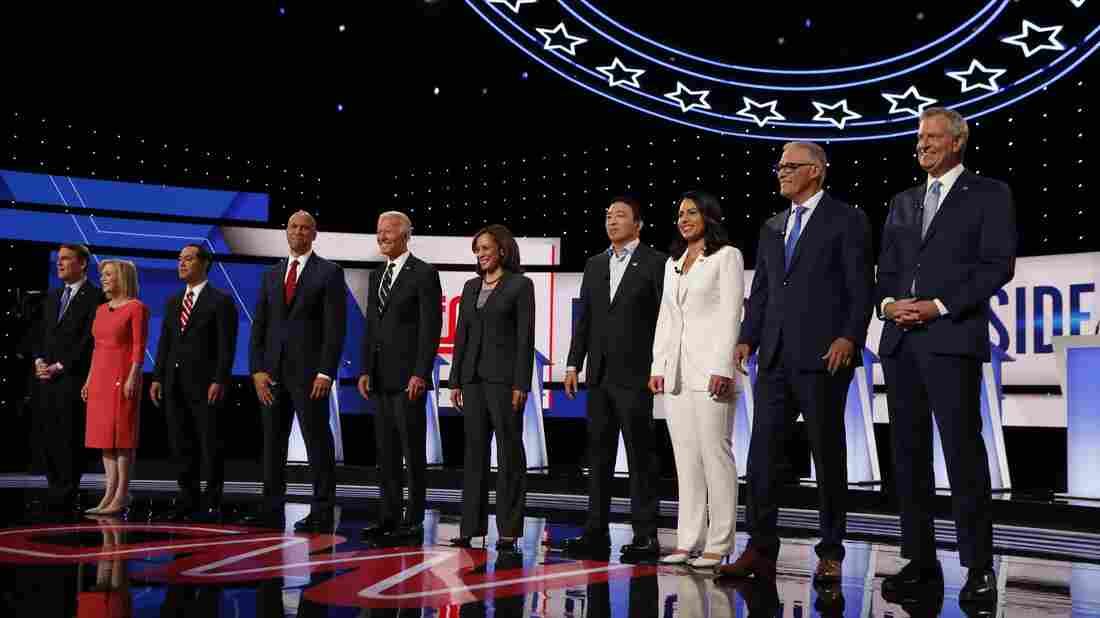 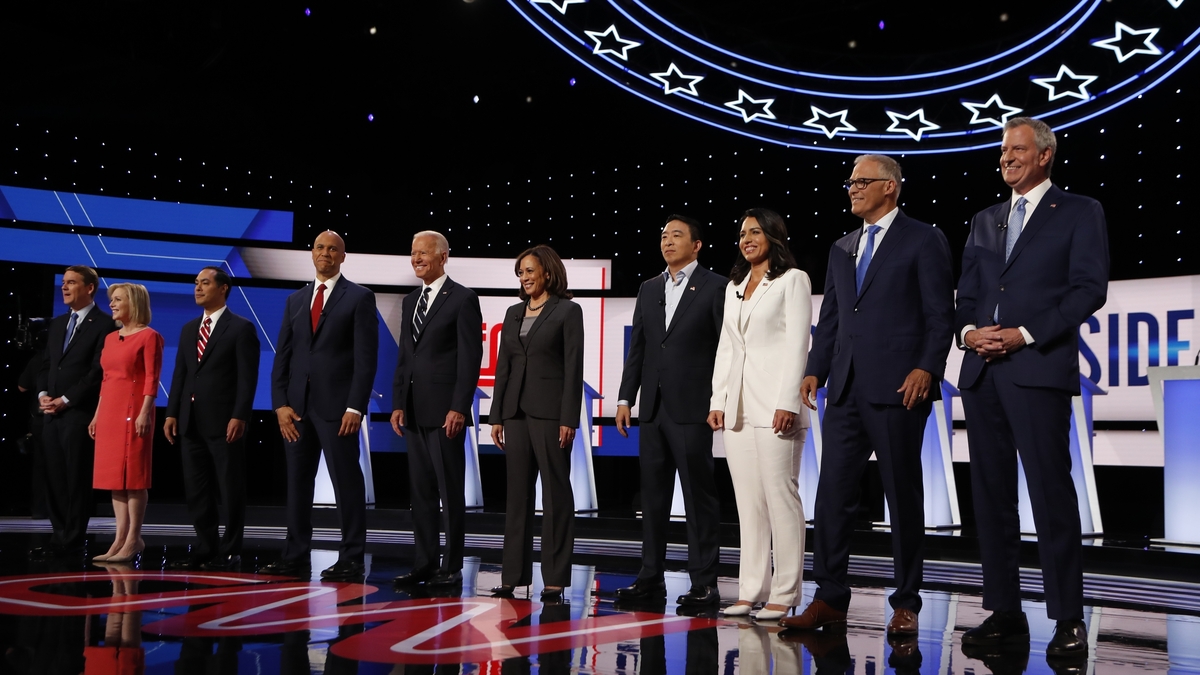 Candidates are introduced before the second of two Democratic presidential primary debates hosted by CNN last month in Detroit.

The massive Democratic presidential field could begin its inevitable reduction this week with only half of the current candidates set to make the cut for next month's debate.

The controversial decision will please many party stalwarts who worry that the often dizzying number of Democrats seeking the nomination could endanger their chances of defeating President Trump.

But other candidates who have struggled to gain traction and meet the debate qualifications set forth by the Democratic National Committee are already complaining that party leaders are trying to manipulate the process — and voters won't even start to weigh in for more than five months.

The 2020 election has presented the DNC with a new set of challenges as it tries to maneuver the largest field in modern presidential history. Here's how the party got here, the historical precedents that led up to this cycle, and why, ultimately, the party does end up playing an outsized role in the nominating process.

Has the party always stepped in during primaries?

"There is a widespread misconception that the right to vote covers voting in primaries. It does not," said Elaine Kamarck of the Brookings Institution.

Kamarck, who is author of Primary Politics: Everything You Need to Know about How America Nominates Its Presidential Candidates, says federal courts have upheld that either political party has the right to set the rules how it wants to, as long as civil rights aren't violated.

Primaries are not covered, she says, because they "are the process whereby a private or semi-public organization called the political party nominates people to be its standard-bearer. In fact, parties have quite a stake in who their standard-bearer is because the value of a party is its brand."

That's why parties are constantly evolving and reacting to the latest elections as they try to nominate the strongest candidate. In fact, the modern primary system as we know it now has only been in place for about the past 50 years as a reaction to the 1968 election. That race saw Democrats nominate Hubert Humphrey, who hadn't run in any primaries, over the anti-war Eugene McCarthy; Humphrey went on to lose to Republican Richard Nixon. So the party moved away from letting delegates and party insiders pick their nominee.

But four years later, after Democrat George McGovern lost in a landslide to Nixon, there was a push for more party influence in choosing a nominee — thus superdelegates (delegates who are free to support any candidate) were created to supplement delegates accrued via primaries and caucuses. Eventually, Democrats replaced a winner-take-all system for individual state contests, like the one used by the GOP, with a proportional allocation system, provided a candidate gets 15% of the vote. Still, there has been a constant push and pull between how much influence primaries versus party leaders should have. After 2016, the role of superdelegates was drastically reduced amid pressure from Bernie Sanders allies.

How have debates been handled by parties in the past?

The question of who makes it on stage hasn't been much of a problem for Democrats until this year, although Republicans began to grapple with it last election. With the sheer number of candidates continuing to grow each cycle, it's a phenomenon that may not be waning.

In 2004 and 2008, for example, all the Democratic candidates were able to fit on one stage, with fewer than 10 major hopefuls running each time. But in 2016, Republicans saw about 17 major candidates seek their party's nomination. So the Republican National Committee decided to split the major candidates into slots for two debates — what became known as the main stage debate for the higher-polling candidates and the "undercard" debate for lower-polling hopefuls. Unlike the Republicans in 2016, Democrats this year are allowing all candidates to debate in prime time.

The RNC came under fire for relying on polling alone to shape their candidate field. So this year, with Democrats facing an even larger field that hit 24 hopefuls at its highest, the DNC came up with a two-pronged system that used not just polling but also fundraising measures to determine which candidates would qualify.

Democratic Presidential Field Will Look A Lot Smaller By September

For the first two debates in June and July, the rules were more lenient. A candidate only had to reach 1% in at least four sanctioned national or early state polls in addition to reaching 65,000 donors from 20 different states. But for the September and October debates, those benchmarks doubled to 2% in four polls and 130,000 donors. So the 20 candidates who made the first debates has been cut in half. Ten candidates qualify so far, with just one day left for others on the verge to do so.

Not making the debate stage doesn't disqualify a candidate, though — and some who don't meet September's stringent criteria could still make it in for October.

Are the debate rules really that limiting for candidates?

No, according to the DNC Chairman Tom Perez. Back in June, he defended the committee's rules, saying that there was an expectation that candidates had to show they were gaining support and not just staying stagnant, especially in such a large field.

"We've said this all along, that in the fall we're going to raise the threshold because that's what we always do. You have to demonstrate that you're making progress. And 2% is hardly a high bar in my judgment," Perez said on CNN in June. "You can't win the presidency in the modern era if you can't build relationships with the grass roots."

Others who have struggled to qualify say the requirements benefit wealthy candidates who can spend more. Earlier this month, Montana Gov. Steve Bullock blasted the rules that could now let billionaire environmentalist Tom Steyer, who just entered the race last month, make the cut but would keep out Bullock, who has argued his electability based on winning in a Trump state but has struggled to catch on nonetheless.

Kamarck's suggestion for Democrats to help the process could boost someone like Bullock. She says that while the party has recoiled from the appearance of trying to determine who might be strong or weak candidates, instead leaving it up to more tangible measures like polls and fundraising, it should reconsider that stance.

The fact that this debate is likely to leave out every single governor running in addition to other elected officials who, in any other cycle, could be strong contenders, is evidence of the hesitation to let party leaders weigh in at all — even if it could be needed. Instead, as many as three candidates who have never held any type of federal or statewide office before could be onstage.

(Of course, Republican Party leaders were unhappy when a political newcomer swamped their primary field in 2016. And then he won the White House.)

"What we've lost in this nomination system, which we had in the old system was peer review — people who know the individuals and know what is required don't have any say anymore in the process," argued Kamarck. "It's been an overreaction."