Accessibility links
Brexit: Queen Will Suspend U.K. Parliament At Boris Johnson's Request The move would shorten the time lawmakers have to organize an opposition vote to a no-deal Brexit. But critics accuse the prime minister of circumventing the democratic process. 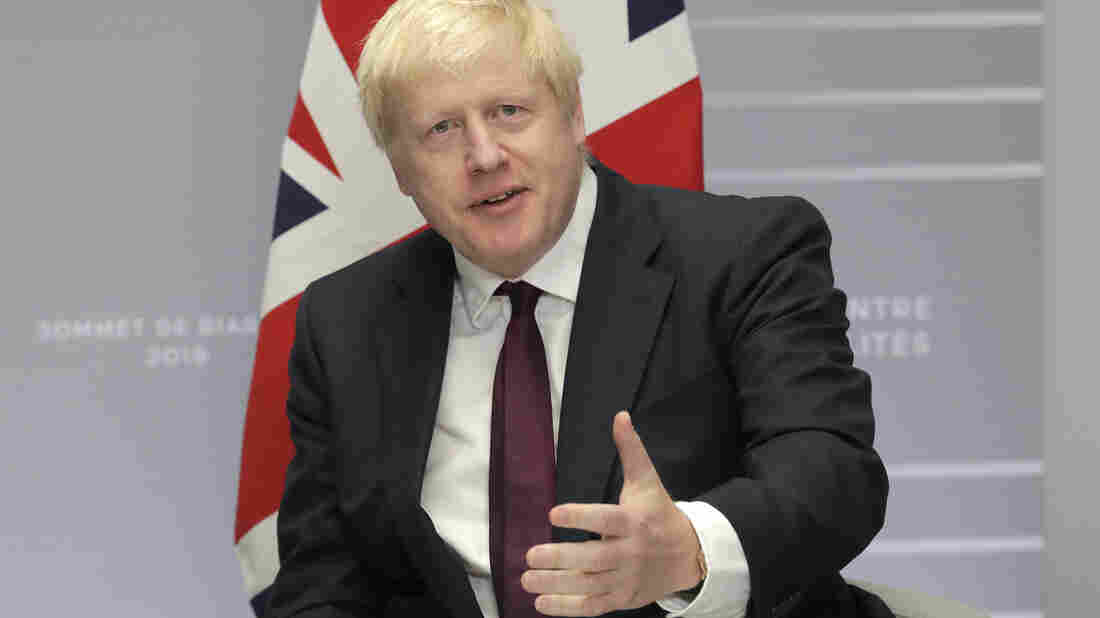 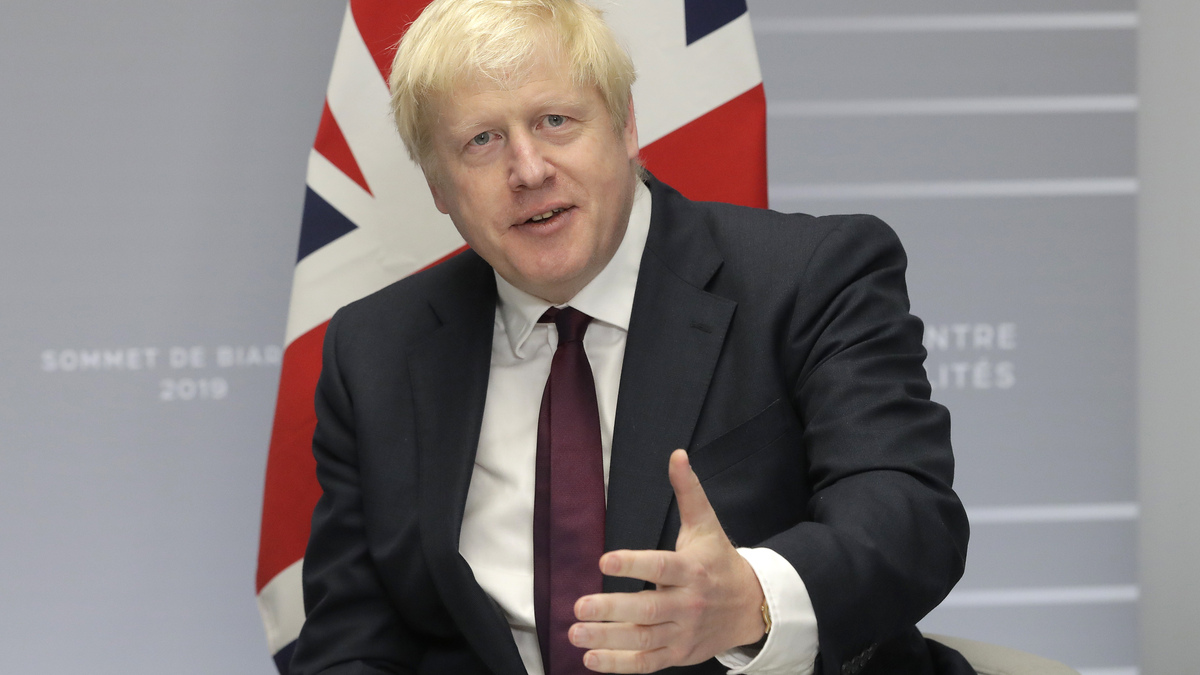 British Prime Minister Boris Johnson has angered opposition lawmakers by asking Queen Elizabeth II to suspend Parliament for a time — a move that would allow him more leeway to secure a no-deal Brexit.

British Prime Minister Boris Johnson has asked Queen Elizabeth II to suspend Parliament, infuriating his political opponents and others who accuse Johnson of circumventing the democratic process. The move would likely allow Johnson to bypass lawmakers and push through a no-deal Brexit.

Within hours of Johnson's request, the queen agreed to prorogue, or suspend, Parliament for several weeks in September and October.

Johnson asked the queen to suspend Parliament during the second week of September, soon after lawmakers return from their summer recess. Under his plan, the body would not meet again until Oct. 14 — two weeks before the deadline for Britain's planned departure from the European Union.

Parliament had been scheduled to meet during the first two weeks of September and reconvene on Oct. 9.

Johnson insists he wants Parliament suspended so he can develop an agenda for his new government. He adds that the queen scheduled a speech for Oct. 14, when he will present his agenda.

Critics, opposition politicians and some members of Johnson's Conservative Party say his maneuver would give lawmakers little time to push back on a no-deal Brexit, which a majority of Parliament opposes.

In an interview at 10 Downing Street, Johnson said, "We're not going to wait until Oct. 31 before getting on with our plans to take this country forward."

"This is a new government with a very exciting agenda," he added.

The prime minister's request that the queen suspend Parliament is drawing criticism from all sides, NPR's Frank Langfitt reports from London.

"People think the idea that the prime minister would drag the queen into this is doubly angering, for not just people on the Labour side of the aisle, the Labour Party, and not just Remainers," Langfitt says.

"Of course, the queen ... she is supposed to be politically above it all. She is the head of state," he adds. "She's not running the government directly, and so I think they think that this is really sort of a bad move by him, in dragging her in, and we'll see what she has to say later."

Outrageous that #Parliament will be shut down at a moment of crisis as we face crashing out of the #EU with no deal & for which there is no mandate. Our democracy is under threat from a ruthless PM elected by less than 100K Con members. Email your MP now & demand Parliament sits

Member of Parliament Anna Soubry called Johnson's move "outrageous." She tweeted that Parliament "will be shut down at a moment of crisis as we face crashing out of the #EU with no deal & for which there is no mandate. Our democracy is under threat from a ruthless PM elected by less than 100K Con members. Email your MP now & demand Parliament sits."

Yvette Cooper, an opposition Labour lawmaker, tweeted, "Boris Johnson is trying to use the Queen to concentrate power in his own hands - this is a deeply dangerous and irresponsible way to govern."

Boris Johnson is trying to use the Queen to concentrate power in his own hands - this is a deeply dangerous and irresponsible way to govern https://t.co/UEn1isXbSp

Conservative Member of Parliament Philip Hammond reacted by saying, "It would be a constitutional outrage if Parliament were prevented from holding the government to account at a time of national crisis."

The move, Hammond added, would be "Profoundly undemocratic."

Johnson put his plan to suspend Parliament into action one day after he reiterated his commitment to take Britain out of the European Union on the Oct. 31 deadline.

"[Labour leader] Jeremy Corbyn wants to cancel the referendum and argue about Brexit for years," Johnson said via Twitter. "I am committed to leading our country forward and getting Britain out of the EU by October 31st."

The term for suspending Parliament in this way is "prorogue" — to formally end a session of Parliament by royal prerogative without dissolving it. According to the official Parliament website:

"A prolonged prorogation reduces the influence of Parliament over the way the country is governed. While Parliament is prorogued, MPs and Peers cannot formally debate government policy and legislation, submit parliamentary questions for response by government departments, scrutinise government activity through parliamentary committees or introduce legislation of their own."

In the U.K., there are long-standing precedents to prorogue Parliament before a speech by the queen, "albeit generally more briefly, and rarely, if ever, at such a constitutionally charged time," the BBC reports, citing royal correspondent Jonny Dymond.

The broadcaster adds that under Johnson's plan, Parliament would be closed for 23 working days. According to the House of Commons Library, prorogation periods since the 1980s have rarely lasted longer than two weeks.

The idea that Johnson might resort to prorogation to get his way on Brexit was seen as a possibility earlier this summer, before he formally replaced Theresa May. One week before Johnson took office, the House of Commons approved an amendment seeking to block any attempts to prorogue Parliament — in a vote that saw more than a dozen defections from Johnson's party.

In the House of Commons' background paper about the process, it notes that because prorogation is a royal prerogative, "there is no obvious legal mechanism by which Parliament could prevent its exercise otherwise than by passing legislation to constrain it."

"What [Johnson] wants to do is run out the clock until the 31st," Langfitt says. "He sounds like he's setting up for a general election the kinds of issues he is talking about. What he seems to want to do is be able to actually crash out and then hold a general election before the economic damage sets in, and try to win a general election, and have enough votes to then drive his agenda."

When asked what levers angry lawmakers might use to ensure they can work on a Brexit deal, Langfitt says the options include approving legislation to postpone the Oct. 31 deadline or perhaps seeking to oust Johnson himself.

"He's only been in office since July," Langfitt notes. "It would be extraordinary to call a no-confidence vote this early. But this is where we are in the Brexit process."

Noting the high stakes involved, Langfitt adds, "People are very angry, and they say this is beyond Brexit — it has a lot to do with democracy."