Accessibility links
Review: 'The Fanatic' Is Limp In Fred Durst's third feature, based loosely on his experience with an overzealous fan, the director lectures the audience while star John Travolta flails away at a one-note performance.

In Stalker Thriller 'The Fanatic,' Travolta Stalks, But Never Thrills

In Stalker Thriller 'The Fanatic,' Travolta Stalks, But Never Thrills 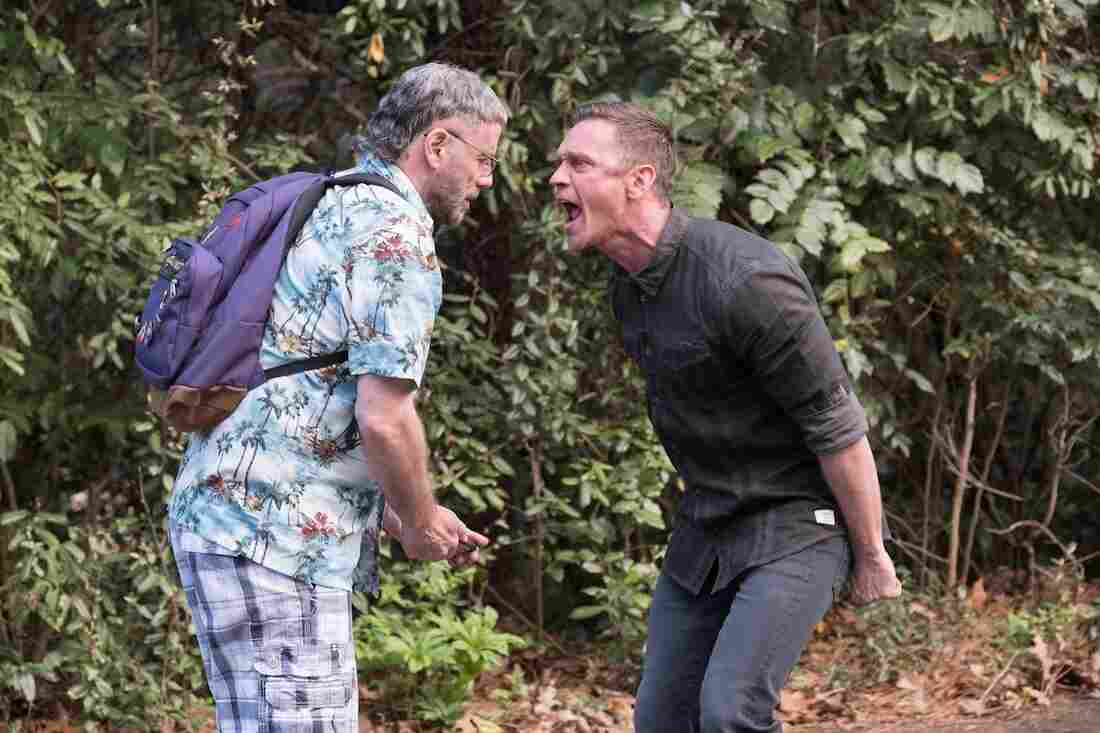 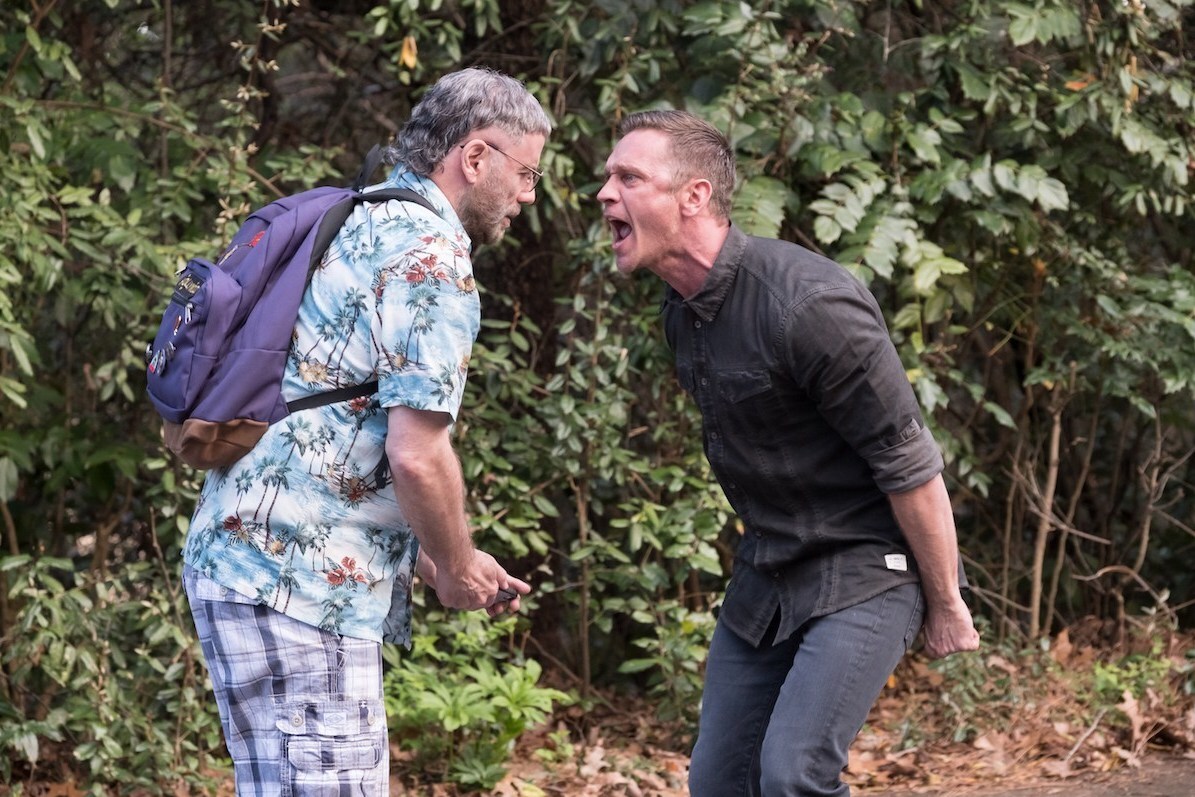 Fred Durst (yes, that Fred Durst) co-wrote and directed this thriller about a stalker. John Travolta (left), stars as the fanatic and Devon Sawa (right), stars as his movie star prey.

Halfway through the miserable psychodrama The Fanatic, Dick (Kenneth Farmer, playing a minor character with only a few lines), asks a couple of aggressive panhandlers to stop harassing his buddy Moose (John Travolta): "Why can't you leave this guy alone, huh?" You won't find any good answers in the movie, an ugly character study about Moose, an emotionally unstable cinephile who stalks Hunter Dunbar (Devon Sawa), his favorite horror movie star.

Moose is such an underdeveloped character that one can't help but wonder why co-writer/director Fred Durst (lead singer of the Nu-Metal group Limp Bizkit), can't stop picking on Travolta's character, though The Fanatic is supposedly based (in part) on Durst's real-life encounters with a starstruck harasser. (Durst shares screenplay credit with Dave Bekerman.)

There's nothing sympathetic about Moose, a petulant fanboy who's defined by his childlike accessories — Hawaiian shirts, a backpack, and a haircut that's halfway between a bowl cut and a mullet, hunched shoulders, constipated waddle, and emotional volatility. Moose repeatedly tries to befriend Hunter, an ungenerous, but understandably vexed B-lister, after the actor leaves a book signing before he can sign Moose's memorabilia.

Some cliché-filled voiceover narration, provided by Moose's celeb-hating/chasing paparazzo friend Leah (Ana Golja), ties Moose and Hunter together, but always in a way that suggests Hunter deserves whatever's coming to him, like when she mysteriously suggests that while, "I have no idea why Moose would go back to that man's house. But I suppose when you find the cookie jar, it's hard to not go back for more."

Still: There's nothing to Moose beyond some general commentary about how fans are entitled bullies, a proposition that's literally spelled out, onscreen, in an introductory quote from Hunter (which he repeats later in the movie, only this time the line occurs as dialogue that Moose forces Hunter to say): "You are a fan. Without you I'm nothing."

Brooklyn Brings Back The 'Fever' With 'John Travolta Day'

Moose's behavior suggests that he's mentally unstable, but the film never explicitly suggests that he's psychologically impaired. Instead, Moose runs around doing whatever he wants, busking on Hollywood Boulevard (dressed as a British bobby, with a truly regrettable accent and fake mustache) and stalking Hunter at his home. Moose is also frequently picked on by fellow street performer Todd (Jacob Grodnik), but that doesn't slow Moose down anymore than do Leah's admonishments to stop stalking Hunter.

Durst fixates on Moose's freakish behavior to the same unhealthy degree that Moose tries to impress Hunter. This is disappointing since Durst — who directed almost two dozen music videos before helming two sturdy enough features (The Education of Charlie Banks, The Longshots) — isn't as amateurish a story-teller as The Fanatic would attest. Still, The Fanatic stinks because Durst doesn't really care about whatever it is that's motivating Moose. He's violent and movie-obsessed, but viewers barely see what Hunter's movies are like, or what Moose likes about them. Moose's friends prove equally hard to read: Leah and Dick never register strongly enough as characters to provide Travolta's character any useful, normalizing context.

Instead, we get a bunch of scenes where Travolta zealously overacts, as when he screams at Hunter, "I wish Freddy Krueger would come, and chop off your head, and it would roll in the street, and a truck would squish it, and the blood would splatter everywhere, and everyone would watch it." Durst sometimes seems to pity Moose, as when he underscores, with a dramatic musical sting, his emotional devastation when Hunter pokes his chest with a marker and angrily signs his name on his shirt. But Travolta's performance, like his twitchy character, isn't even desperate in a cruelly amusing way: When he inevitably manages to get Hunter where he wants him, Moose tries to win over his captive audience by crudely imitating movie baddies from Friday the 13th, Saw and Reservoir Dogs, as if we needed reminding that this character knows more about movies than reality.

The same could be said about Durst and The Fanatic: He consistently punches down at fans who, in the relatively innocent days of the late 90's and early 00's, might have been encouraged by Durst's band when they sang about "my generation" and doing things "my way," not to mention feeling misunderstood "behind blue eyes," and "[doing] it all for the nookie."

Instead, Durst now refers us to "The Truth"—Limp Bizkit's 2005 rallying cry about "accepting the truth" and rejecting a vaguely menacing father figure — in a brief scene where Hunter and his son bond over Durst's mediocre metal music. Unfortunately, The Fanatic proves just as opaque as that song's lyrics: "Somehow, you replaced all your game with a debt, now the payback's a bitch/Why owe your life to a bitch?"

Hunter, in this example, is presumably the "bitch" that leads Moose astray, but nothing he does makes their fallen idol/clueless stalker power dynamic any more concrete and apprehendable. Moose's addiction to social media serves him poorly, his fair-weather friends treat him abominably, but in the end, nothing regards him with more cruel indifference than the film itself.