Accessibility links
Brexit Is The Latest Blow To The British Pound, Once A Symbol Of Economic Might The pound was long the symbol of Britain's economic might. The chaos surrounding Brexit, the country's 2016 decision to leave the European Union, has sent the currency falling sharply. 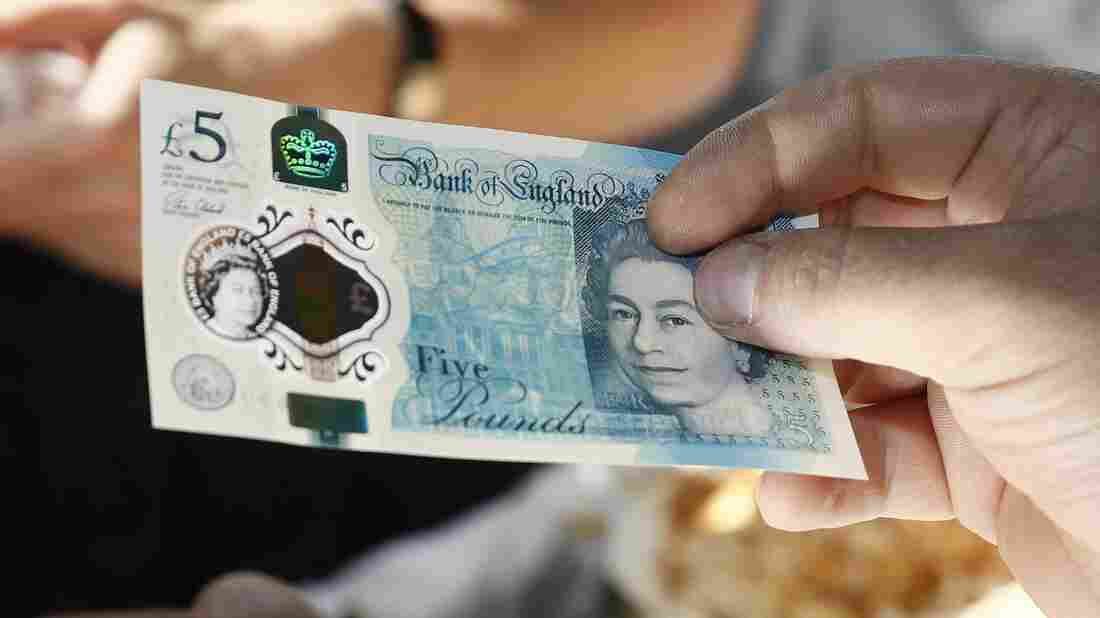 The pound was long the symbol of Britain's economic might. The chaos surrounding the country's 2016 decision to leave the European Union has sent the currency falling sharply. WPA Pool/Getty Images hide caption 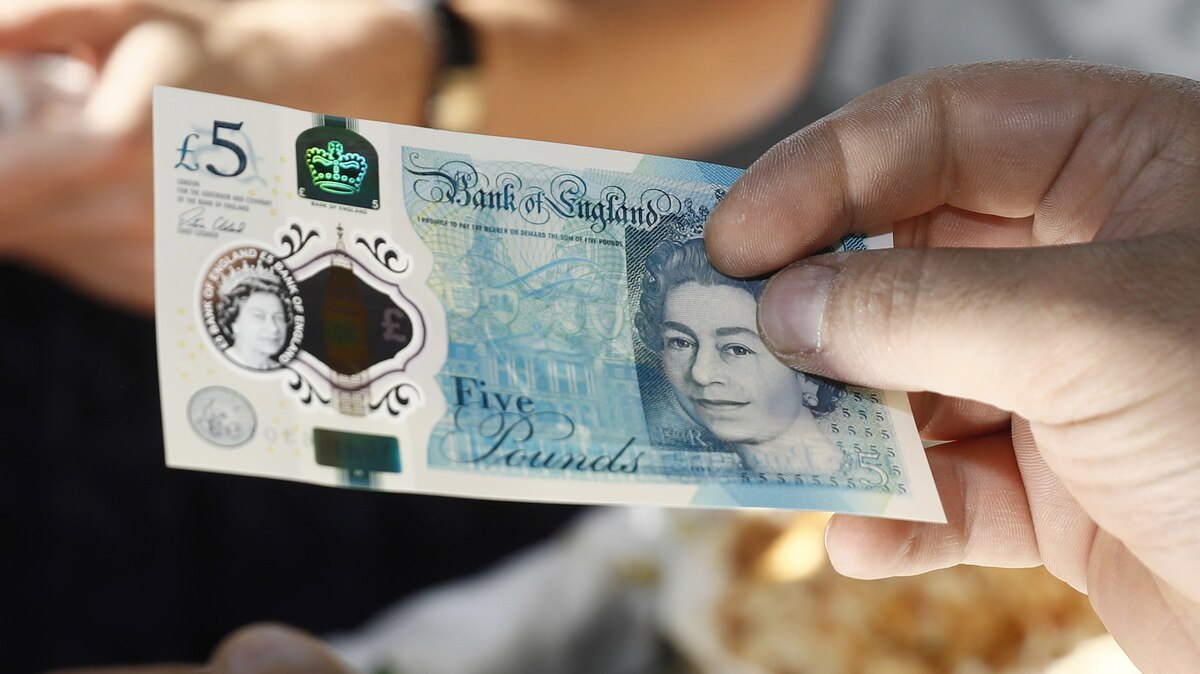 The pound was long the symbol of Britain's economic might. The chaos surrounding the country's 2016 decision to leave the European Union has sent the currency falling sharply.

The British pound sterling is the oldest currency still in use in the world, dating to the time when Britain was little more than a collection of warring fiefdoms regularly plundered by Vikings.

Since its first use in the eighth century, the pound has survived revolutions and world wars, the industrial age and Thatcherism, and today it remains a powerful reminder of the glory days of the British empire.

But over the years, the pound has lost a lot of its luster, and in the wake of the Brexit turmoil, some economists believe it will only keep losing value.

For Britain, the pound is a rich cultural symbol. Pound notes have been adorned with pictures of the most illustrious figures in British history, including William Shakespeare, Jane Austen, Winston Churchill and Charles Darwin.

The pound's place in British culture became apparent during the debate over the euro in the late 1990s. The nations of Europe were about to give up their francs, deutsche marks and lire in favor of a new currency they hoped would unite the continent in peace and prosperity and would solidify its political and economic power.

Tourists would no longer have to exchange money each time they visited a new country. Businesses could trade freely across borders, without worrying about currency fluctuations.

Only Britain balked at the change.

"We will not seek membership of the single currency on 1st January 1999," then-Chancellor of the Exchequer Gordon Brown told Parliament.

Today, the U.K.'s decision to stick with the pound — also known as sterling or, more colloquially, the quid — is seen by many economists as a prudent move, one that helped Britain recover faster after the Great Recession.

But Britain's decision was driven as much by culture as by economics.

"We're a very proud nation. Used to rule the waves," says British businessman Cliff Franklin, who lives in New York. "And the pound is dear to British people's hearts. And I'm sure it would have been a cultural nightmare to try to get rid of it and go into the euro."

Throughout its history, as Britain's power grew, so too did the importance of its currency.

During the reign of Queen Victoria, Britain became a major commercial and industrial center. British capital financed railroads in India and Australia, shipping ports in Asia and cotton plantations in the United States. The pound could be used to buy and sell anywhere on Earth.

"If you go back to the 19th century, the British pound occupied the place in the global economy that the U.S. dollar does today," says Niall Ferguson, a senior fellow at the Hoover Institution and the author of The Ascent of Money.

But the 20th century, with its two world wars, saw a slow, gradual decline in Britain's power and a commensurate drop in the value of the pound.

"It's difficult to maintain a dominant currency if you put yourself through a world war as costly and destructive as World War I was for Britain," Ferguson says.

"The empire is no more," says economist Rex McKenzie of Kingston University in London. "The influence of the country has declined, and that is being reflected in the ... exchange rate."

One of the most dramatic chapters in the pound's long decline was known as Black Wednesday.

On Sept. 16, 1992, deep-pocketed investors led by George Soros made huge bets against the pound, ultimately driving down its value. Soros is said to have made more than $1 billion that day.

Before then, the pound was pegged to a basket of European currencies; afterward, the government was forced to let the pound float freely in currency markets.

Having an independent currency was a big advantage after the financial collapse of 2008, giving the Bank of England more flexibility to respond to a fast-moving crisis.

"The problem with the euro was that the policies that helped Germany weren't necessarily the ones that were right for Greece or Spain or Italy or other places," says Dartmouth College economist David Blanchflower.

Having an independent central bank "turned out to be a smart thing, and having a currency that you could depreciate was a really big deal," says Blanchflower, who sat on Britain's equivalent of the Federal Reserve committee that sets interest rates.

Britain has tried often over the years to prop up the pound, with diminishing success.

"My childhood was in some ways scarred by periodic sterling crises," Ferguson says. "I think they were my introduction to economics as a boy growing up in Britain."

More recently, the government's chronic inability to come up with a Brexit plan has sent the pound tumbling to a record low against the dollar, notes Simon Johnson, former chief economist at the International Monetary Fund.

When Britain voted to leave the European Union in 2016, the pound was worth nearly $1.50. Since then, it has steadily lost value and trades today at just above $1.20. Many economists think it could soon reach parity with the dollar, something that would be unprecedented.

A drop in value is something of a mixed bag for the pound. It makes imported products more expensive inside the country, but it also helps British companies compete by driving down the price of the goods they sell abroad.

Still, the pound's steady decline underscores the shifting fortunes of Britain itself and its diminished place in a global economy dominated by the United States and, increasingly, China.

How much further can it fall? Johnson doesn't want to hazard a guess. While the British economy is "running at a fairly decent clip right now," he says, confidence in Britain's ability to manage its departure from the European Union is waning.

"It depends, really, on how disruptive the Brexit developments are and precisely how that affects British trade," Johnson says.

Dartmouth's Blanchflower says the ongoing Brexit fiasco could send the pound's value falling below that of the euro or the U.S. dollar, something that's never happened before.

"The chaos that sits around a possible no-deal Brexit is scaring the markets," he says. "And so the pound is falling steadily."