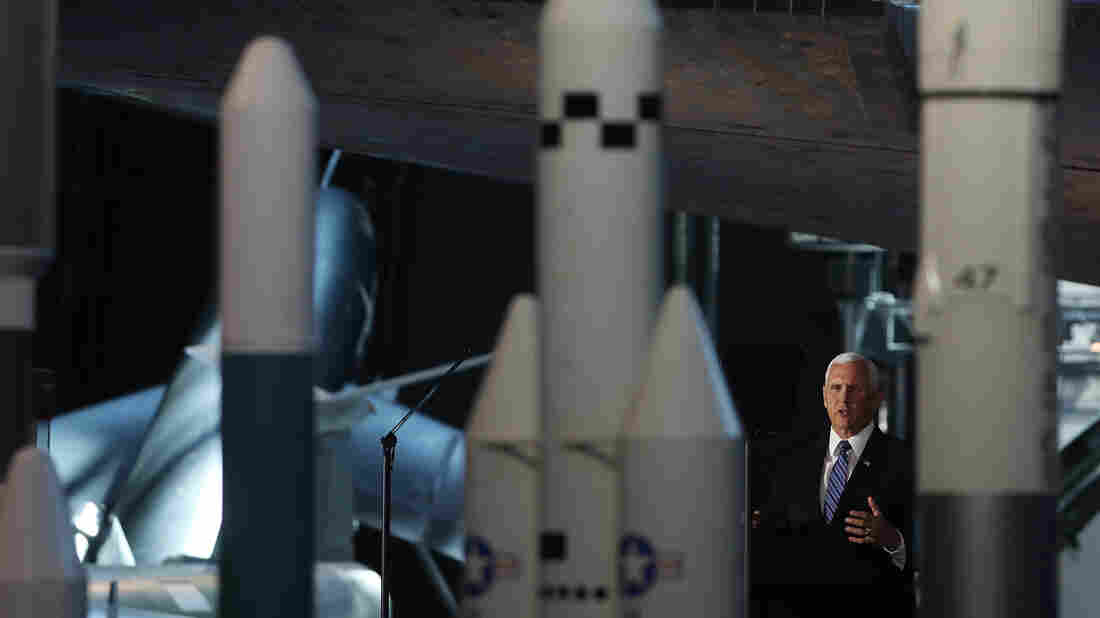 Vice President Pence speaks during a meeting of the National Space Council last week in Chantilly, Va. Pence and President Trump have pushed hard for the establishment of a separate Space Force — and they hope the revival of U.S. Space Command will help get them there. Mark Wilson/Getty Images hide caption 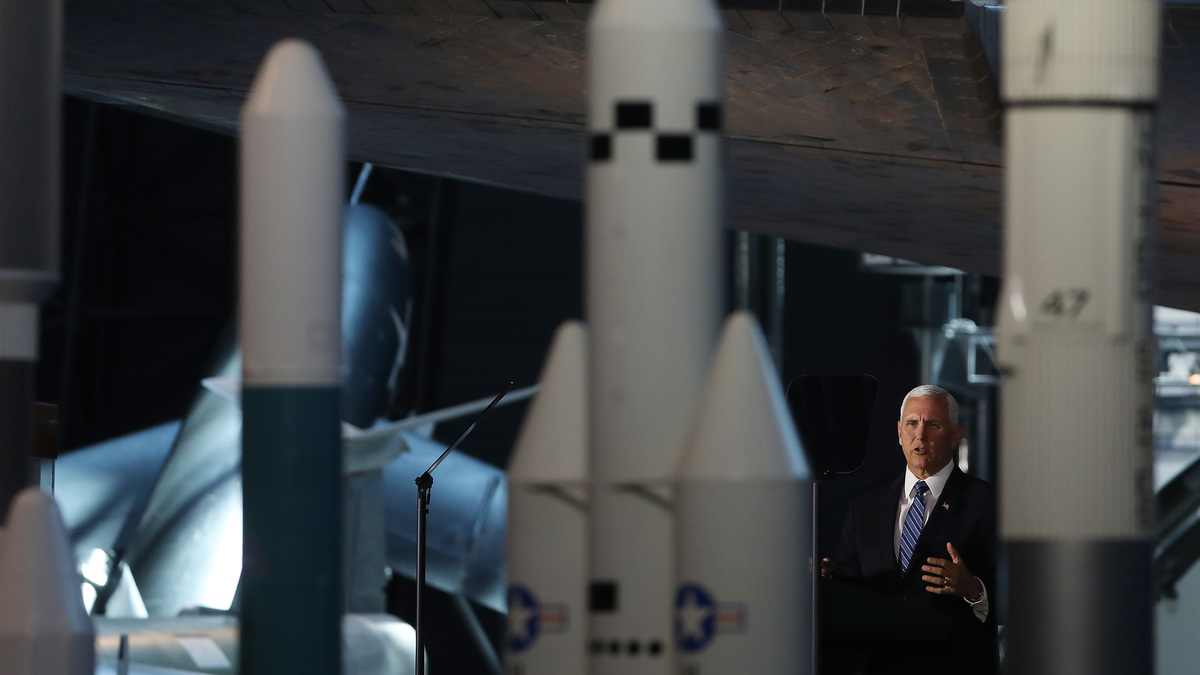 Vice President Pence speaks during a meeting of the National Space Council last week in Chantilly, Va. Pence and President Trump have pushed hard for the establishment of a separate Space Force — and they hope the revival of U.S. Space Command will help get them there.

President Trump and Vice President Pence are taking one small step that they hope will mark a giant leap toward the military branch they want for outer space. At a ceremony Thursday at the White House, the pair plan to take part in a ceremony commemorating the return of the U.S. Space Command after a 17-year hiatus.

Space Command is a division within the Defense Department tasked with unifying and directing national security operations in space. It's not to be confused with the Trump-proposed sixth military branch that's come to be known as Space Force — a plan that faces a much more complicated path because creating a branch of the armed forces requires congressional approval.

Nevertheless, the Trump administration is hailing the revival of Space Command as a milestone in its quest to dedicate troops to the final frontier.

"To ensure the protection of America's interests in space, we must apply the necessary focus, energy and resources to the task — and that is exactly what Space Command will do," Defense Secretary Mark Esper said at a news conference Wednesday with Gen. Joseph Dunford, chairman of the Joint Chiefs of Staff. "As a unified combatant command, the United States Space Command is the next crucial step towards the creation of an independent space force as an additional armed service."

Space Command traces its roots back to 1985, when it was established by the Air Force to coordinate missile defense and surveillance efforts at a time when the Cold War was again heating up.

But times — and presidential priorities — change, and after the attacks of Sept. 11, 2001, federal authorities turned their attentions to combating terrorism. Space Command was merged into the unified Strategic Command in 2002, when it was repurposed to focus on the U.S.-led invasion of Afghanistan.

With Congressional Blessing, Space Force Is Closer To Launch

It wasn't until late last year that President Trump formally ordered the Pentagon to strip the Strategic Command of its "space‑related responsibilities" and give them to a separate entity, one tasked with overseeing all U.S. military and intelligence efforts in space. That includes defending American satellites, supporting American troops from orbit and planning how future combat might be conducted in space.

Air Force Gen. John Raymond has been tapped — and Senate-confirmed — to lead the reestablished group. Raymond was a natural candidate for the role: For the past three years, he has led the Air Force Space Command, the confusingly similarly named office that focuses solely on Air Force operations in space. That division has been around since 1982. Splitting it from the Air Force and making it an independent entity has been floated by some as one possible means of creating a sixth armed service.

A move of that magnitude also would require congressional approval, however. When outlining the Trump administration's vision for the service last year, Pence said they're in negotiations to "stand up the United States Space Force before the end of 2020."

For now, though, Pence and his counterpart in the Oval Office are embracing the revived Space Command as a way to consolidate leadership structures and coordinate missions.

"This step will put us on a path to maintain a competitive advantage," Dunford said last week at a meeting of the National Space Council, which oversees the nation's space policy. "The direction is clear. We understand it. And we're moving on."