Accessibility links
Hong Kong Democracy Activists Arrested Ahead Of Planned March The group Demosisto said Joshua Wong, Hong Kong's best known pro-democracy leader, was among those arrested in what appeared to be a coordinated sweep by police. 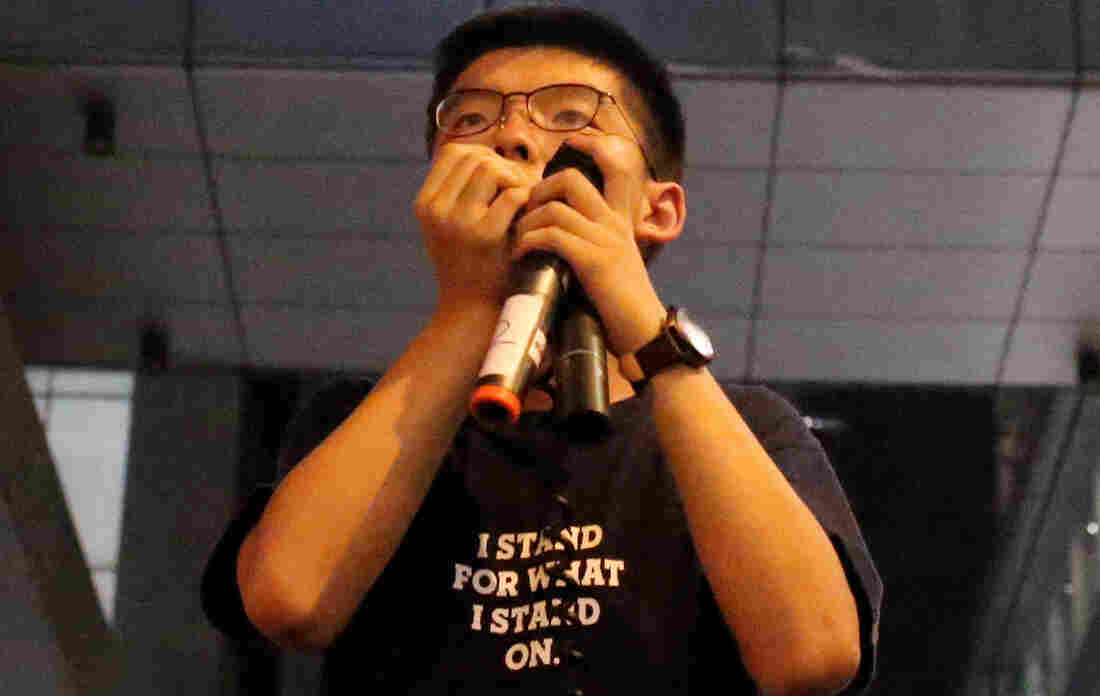 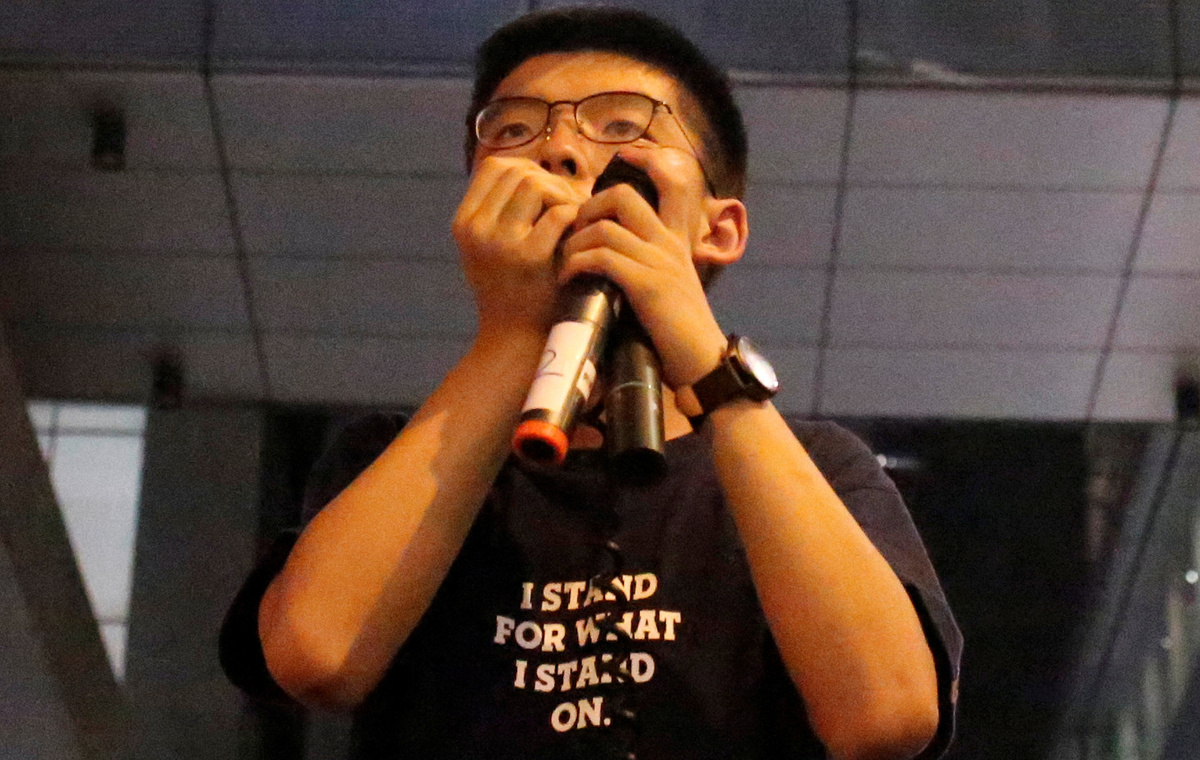 Joshua Wong speaks to protesters outside police headquarters in Hong Kong on June 21.

Joshua Wong, Hong Kong's most famous pro-democracy leader, was arrested on Friday along with fellow activists and politicians in what appeared to be a coordinated sweep by the city's police ahead of a mass anti-government march that had been planned for the weekend.

Agnes Chow Ting and Andy Chan, two other prominent protest leaders, were rounded up along with Wong. Later in the day, lawmaker Cheng Chung-tai and district council member Hui Yui-yu — Hong Kong politicians who have participated in the protests — were also arrested, as was Althea Suen, a former president of the University of Hong Kong's student union, for her alleged role in the July 1 storming of the city's Legislative Council building.

Wong and Chow were later released on bail.

The arrests came on the eve of the fifth anniversary of the event that sparked the Umbrella Movement led by Wong. The pro-democratic demands from the 2014 demonstrations have been taken up in the latest, largely leaderless, protests that began in Hong Kong nearly 12 weeks ago.

The youth activist group Demosisto said Wong was walking to a metro station around 7 a.m. Friday (7 p.m. Thursday ET) when police bundled him into a minivan and drove away. Chow was arrested in her home early Friday morning. Both have been taken to police headquarters in Hong Kong's Wan Chai district for further questioning. Police have not formally announced charges. 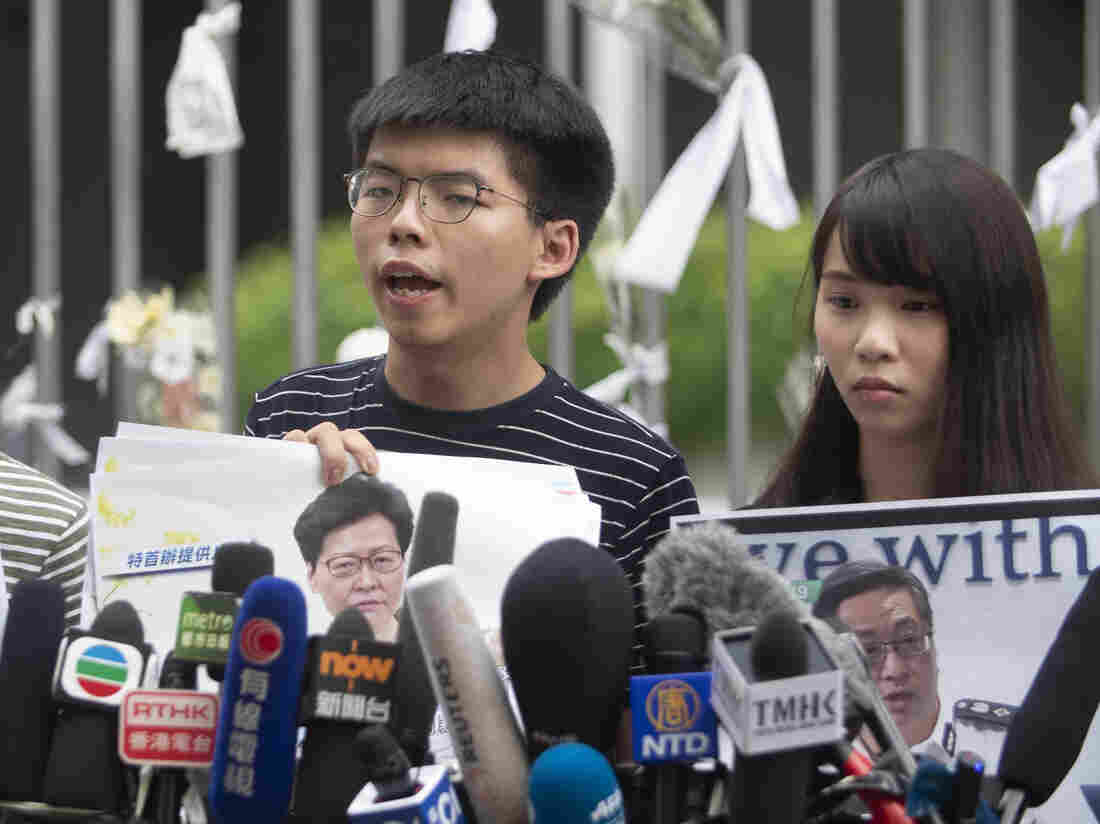 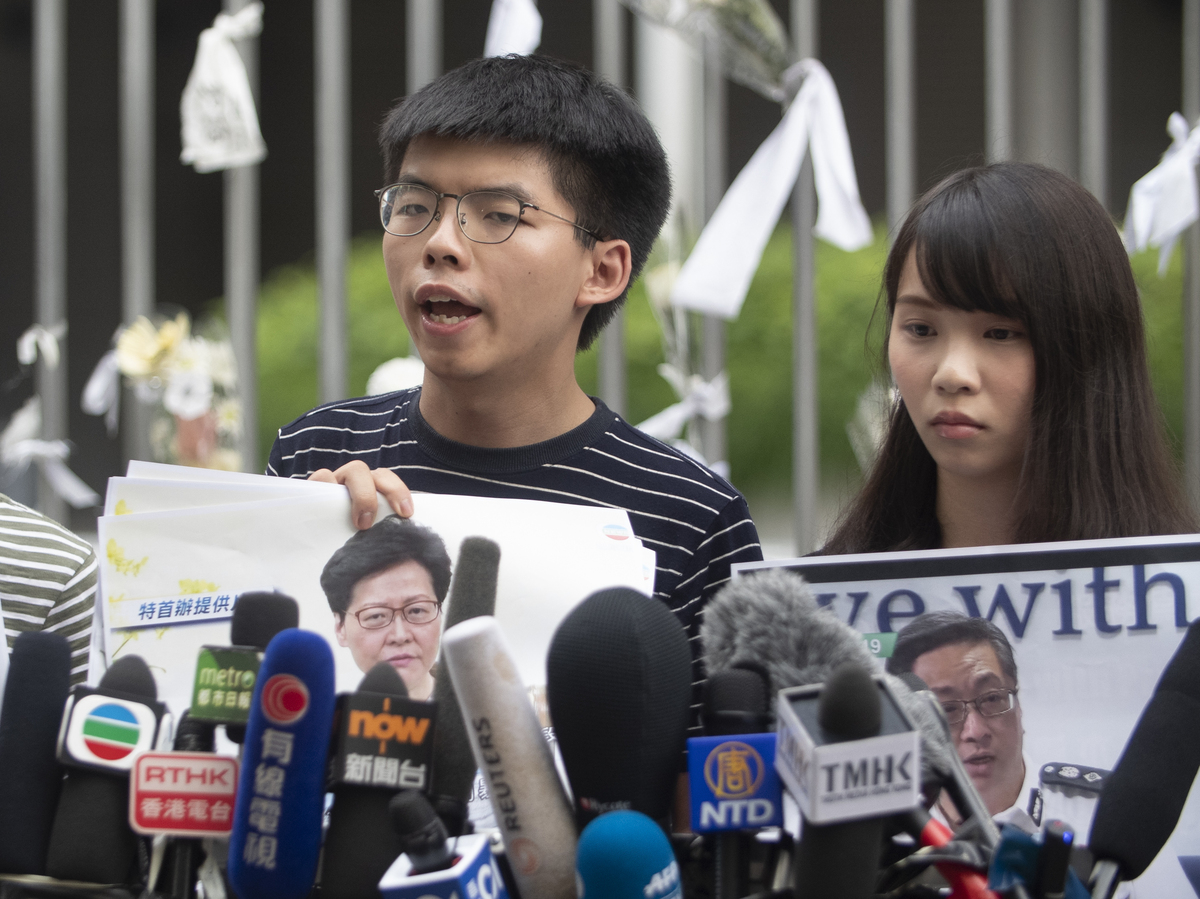 Pro-democracy party activists Joshua Wong and Agnes Chow Ting speak to the media outside the Legislative Council building in Hong Kong in June.

A Hong Kong police spokesperson said Chan, another Umbrella Movement leader and the head of a now-banned pro-independence political party, was detained at the Hong Kong airport en route to Japan on Thursday night. Demosisto denied rumors that its chairman, Ivan Lam, had also been arrested Friday.

The coordinated arrests come as protesters were planing to head to the streets again on Saturday, despite a police decision to deny them permission. Shortly after the arrests, organizers said they would cancel the march.

Students and workers had also planned citywide strikes Monday and Tuesday with a sit-in at Chinese University of Hong Kong on Monday afternoon, the day Hong Kong's universities begin their fall semester. Hong Kong's education bureau warned students not to participate in strikes. 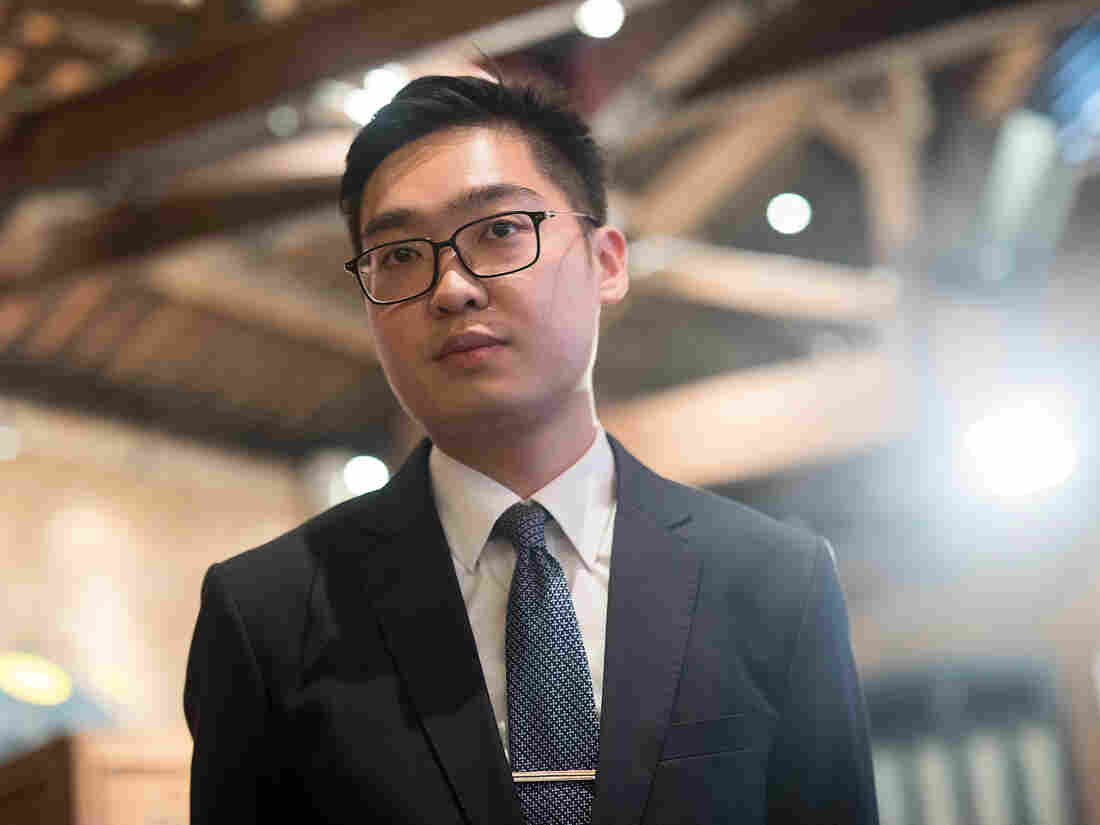 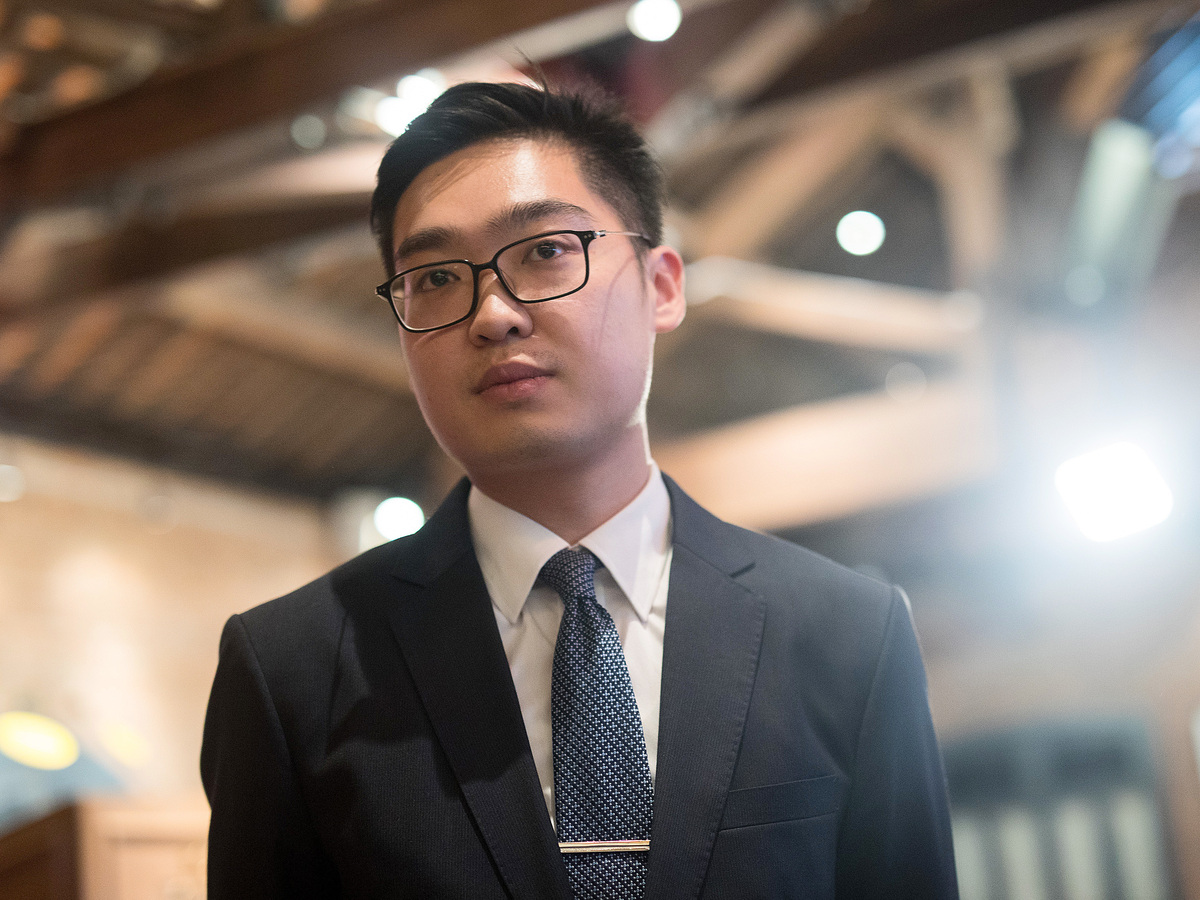 It wasn't immediately clear whether the strikes next week would go ahead as planned.

At a news conference on Friday, Demosisto Vice Chairperson Isaac Cheng expressed defiance, urging the government to respond to the organization's demands, "otherwise, the people may be using some more radical ways or more hard ways to respond."

He said Beijing was trying to "spread a message of fear" about the protesters.

Cheng said he believed that the march would go on despite being canceled, as would next week's strike.

"We encourage and we believe that Hong Kong people will still take part in the future protests and also the second of September strike," he said.

Police had previously denied permission for a march planned for Aug. 18. Even so, organizers say 1.7 million people turned out and marched peacefully in the rain.

Wong, the pro-democracy leader, has been charged and sentenced several times for his involvement in previous protests. In May, he was sentenced to two months. Upon his release in June, he immediately called for the resignation of Hong Kong's Beijing-appointed chief executive, Carrie Lam.

In Hong Kong, Moderate And Radical Protesters Join Forces To Avoid Past Divisions

On Thursday night, Jimmy Sham, one of the leaders of the organizing group behind the biggest mass protests in Hong Kong so far this year, and Max Chung Kin-ping, another protest organizer, were attacked by unknown assailants in different parts of the city.

Both Wong and Chow took part in the 2014 pro-democracy Umbrella Movement, sparked by China's decision on Aug. 31 that year to prescreen candidates for election to Hong Kong's chief executive.

The movement fizzled after 79 days of peaceful occupation in Hong Kong's business district, but it has partly inspired the current pro-democratic protests.

Karen Tsang in Hong Kong contributed to this story.