Accessibility links
Review: 'Dark Crystal' Prequel Is Beautiful But Hollow Netflix's 10-episode series — a prequel to the 1982 film — is, like the original, breathtaking to look at, but its thinly-drawn characters can't carry their narrative weight. 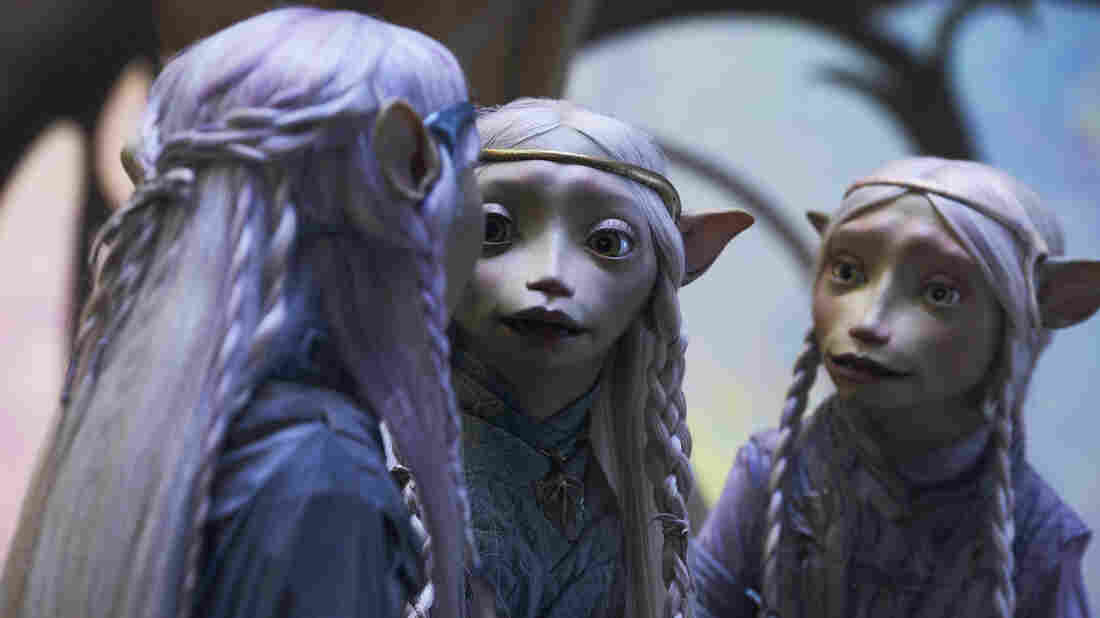 The three sister-princesses of the Vapra clan await the apology they feel they are owed in the Netflix prequel series Dark Crystal: Age of Resistance. Kevin Baker/Netflix hide caption 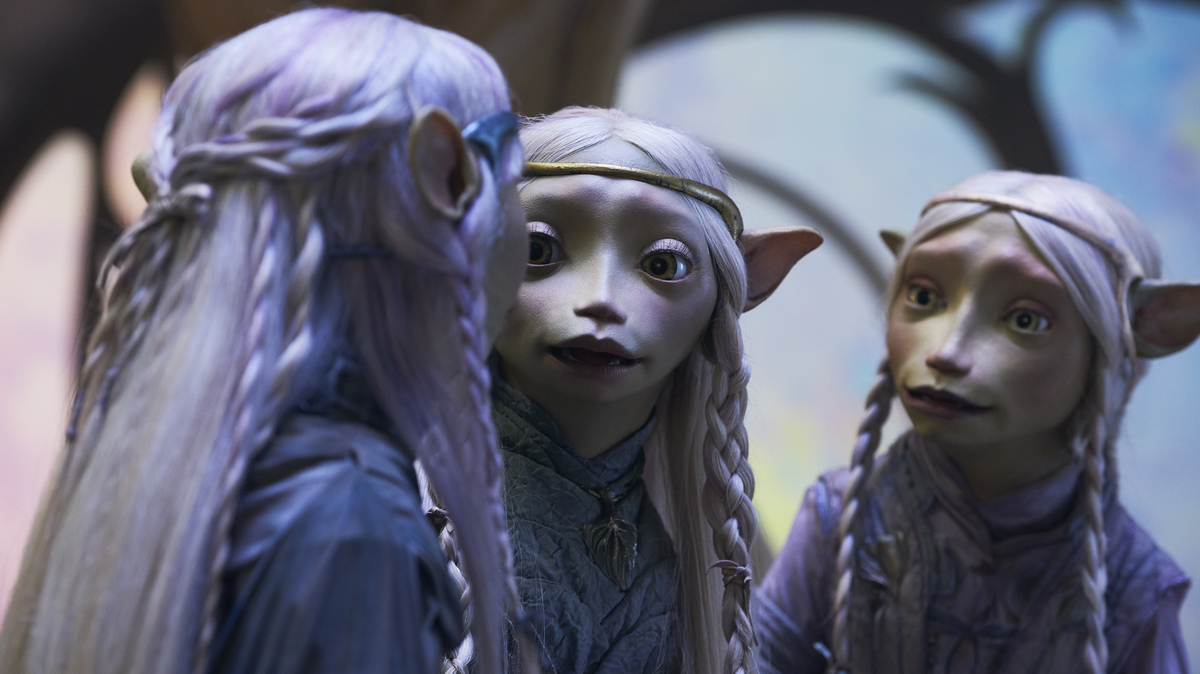 The three sister-princesses of the Vapra clan await the apology they feel they are owed in the Netflix prequel series Dark Crystal: Age of Resistance.

Let's get the cheap joke out of the way up top:

Look, if I wanted to watch dead-eyed, expressionless creatures sniping at one another over backstories I can't follow without consulting the Internet, I'd watch Real Housewives.

(Or Gelfling, technically. I am reliably informed that the plural of Gelfling — the o.g. Dark Crystal's wan, elf-like protagonists — is "Gelfling." Similarly, the plural of Skeksis — this fantasy world's eeeeEEEeevil villains, which look like what would happen if Gonzo schtupped a turkey vulture — is "Skeksis." Clip and save for your records.)

On their own, they'd be generic enough — a first-pass attempt at your garden-variety Tolkien-adjacent high-fantasy race. But as soon as you place them — as do both the original 1982 The Dark Crystal film and Netflix's new, 10-episode prequel series — at the center of a world as gorgeously wrought, breathtakingly detailed and astonishingly elaborate as that of The Dark Crystal, they become something even worse: They're basic.

The Jim Henson/Frank Oz film, which like the series teemed with all manner of creatures, plant life, settings and costumes conceived of by Henson and production designer Brian Froud, was anything but basic. It was far, far too weird a thing for that. The sheer idiosyncratic imagination stuffed into every frame — and brought to vivid (often terrifying) life by the Henson Creature Shop's skilled teams of puppeteers and craftspeople — conjured a rich narrative universe into being, steeped in myth, magic and mummery. And that's to say nothing of the plain craft of the thing — you could watch it just to admire the way the corner of that one Skeksis' mouth-beak curled into a sneer. Or to grimace during the feast scene in the Castle of the Crystal, which existed at the place where food porn met body horror. Or to gaze admiringly at the procession of Mystics (the good wizards of this universe — part giant possum, part ALF) as you attempted to figure out precisely how the puppeteers were puppeting those puppets.

NPR's Fall TV Preview: 19 Shows To Watch Out For

But all that exquisite, literally fantastic spectacle revolved around a Gelfling called Jen, an utter snooze of a character saddled with a name that even then didn't read "High Fantasy" so much as "Hickory Farms Cheese Hostess." Of course he came factory-installed with the familiar Joseph Campbell sport package: Chosen One, Refusal of the Call, Crossing of the Threshold — the whole reluctant-hero monomythical schmear, really. The filmmakers spent so much time creating the world around him that they skimped on actually characterizing the poor, pointy-eared schmuck. Even when he met his traveling companion, the female Gelfling Kira, his personality didn't grow, develop or change in any way, because he didn't have one to start with. (As for Kira, her personality amounted to "Jen but with bangs.")

The problem wasn't simply that they were thin, underwritten characters, though they were certainly that. The larger problem was their faces.

When Henson and Co. create wildly inhuman, or un-human, creatures, we'll blithely accept them, whether their eyes are ping-pong balls (C. Monster, K.T. Frog) or their mouth's that of a toucan with a skin condition (assorted Skeksis). Pigs, podlings, bears or bog monsters — it doesn't matter. We cheerfully buy into the illusion, not only because these women and men are so skilled in the art of design and puppetry, but because we know that we're tourists wandering through someone else's imagination — we assume things look and act different, there.

But Gelfling? They've got disturbingly human-like faces, and we know how those work. And even though the art of Gelfling-animatronics has evolved in the 37 years since the film — eyebrows now knit, cheeks now dimple — Gelfling as a race remain permanent residents of the darkest depths of the uncanny valley.

One of the smartest things the Netflix series does is avail itself of the mythology found in supplemental material that's accreted to the film over the years — including Dark Crystal comics and YA novels — and build on it. These Gelfling aren't merely the blandly interchangeable, neo-Tolkien elf/halfling hybrids of yore. Now they belong to one of seven fractious clans, each with its own discrete history, temperament and approach to interior design; they look and talk in ways that differ markedly from each other. They've got better dialogue, thank god, and evince clear, consistent motivations. Which is to say, they finally possess individual personalities. They're characters.

This means the series can and does greatly deepen and expand the world of the film, by introducing multi-various inter-character conflicts. Thus are shades of gray introduced to the film's hilariously black-and-white moral universe. The various Gelfling clans regard one another with distrust or outright antipathy, which the Skeksis cannily exploit. There's palace intrigue, a bit of romance, high adventure and shifting allegiances.

But the series' decision to rest so much of the story's narrative weight on the Gelfling continually threatens to collapse the whole endeavor, because those skinny li'l puppet-arms just can't bear it. More specifically, those glassy eyes and stiff mouths can't emote it, try as they might. Even when a given scene of Gelfling dialogue almost works, their blank expressions still make it look like Game of Thrones got botoxed.

The puppeteers are doing their best, and they're very, very good, but their roster of go-to moves are ... well, for the sake of argument let's call them "Muppety." You know them when you see them: Those little head-nods of satisfaction. That head wiggle, accompanied by an indignant "Hm!" sound. The way they mime walking, heads bobbing up and down like they're breast-stroking through the air. When any of those familiar, Muppety motions occur in a Skeksis, a Podling, a Fizzgig, or a Mystic, we're in. It's part of the deal, part of this world. With a Gelfling, though, we can't help but find our eyes wandering just below our television screen or computer monitor, half-expecting to see the hard-working schmo walking around with a Gelfling shoved on the end of their arm.

The voice cast is universally strong, with a handful of clear standouts — actors who hurl themselves full-bodied into their roles, with heedless comic gusto. These include Awkwafina, Harvey Fierstein, Jason Isaacs, Benedict Wong and Andy Samberg, who play assorted Skeksis, and clearly showed up to the recording studio knowing full well that they were tasked with voicing creatures who exhibit all the subtle emotional nuance of your average British Pantomime villain. Any acting coach will tell you: There are times for staid Pinteresque interiority, and there are times to blow out your dang larnyx screaming "DRAAAAAIN HIIIIIIISSS ESSSSSENNNNCE! AH HA HA HA HA! DEEEEELICIOUSSSSS ESSSSSSSENNNNCE!" at the top of your fool lungs. The key is knowing which is which, and these actors very, very do.

Two more Skeksis having a ball: Mark Hamill as The Scientist makes no small choices, villainy-wise; the very sound of his voice is the sound of millions of mustaches twirling. But the star of the series is Simon Pegg's uncanny, pitch-perfect spin on the Chamberlain — the original film's scheming, simpering Big Bad, voiced with unctuous brio by the late Barry Dennen (Jesus Christ Superstar's Pilate!). Pegg marvelously recreates Dennen's take on the character — the delighted mewling, the inability to employ "to be" verbs — but the performance is no mere mimicry; it's a deeply loving evocation.

As various Gelfling, Taron Egerton, Beccy Henderson, Anna Taylor-Joy, Gugu Mbatha-Raw and many, many others do everything they can to invest their characters with an emotional resonance that outpaces their facial expressions and stiffly hinging mouths' ability to express it. Harris Dickinson, on the other hand, ably squares the Gelfling circle by adopting a laconic, disaffected demeanor — which works.

Fans of the film will find the series stuffed to the gills with Easter eggs and oh-so-that's-where-that-came-from shout-outs, but these rarely bog down the storytelling. The foregrounding of practical, old-school puppetry and animatronics over CGI pixel-pushing is never less than impressive, and the blend between the two approaches proves seamless.

A caveat for parents, and for squeamish non-parents: Like the film, the series delights in offering up nightmare-fuel engineered to keep young children and middle-aged cowards up at night. Scuttling spider-creatures. Oozing pustules. Many, many, many scenes of puppet-animal abuse, and truly sadistic puppet-on-puppet torture. More stomach-turning feast scenes featuring ... all of the above, really.

Understand: The Dark Crystal: Age of Resistance is never anything less than impressive: It's beautiful to sit and gawp at, and its narrative, compared to that of the film, is more satisfyingly detailed and nuanced. But in entrusting so much of the story to puppets incapable of adequately executing its emotional demands, the series winds up feeling strangely empty.

Gorgeous, multi-faceted, hollow at its core. Turns out, after all this time, The Dark Crystal was a geode.