Accessibility links
U.S. Criticizes South Korea After Seoul Scraps Intelligence-Sharing Pact With Tokyo Washington is unhappy with the decision to quit a 2016 intelligence-sharing agreement. The dispute has its origins in Japan's occupation of the Korean peninsula that ended after WWII. 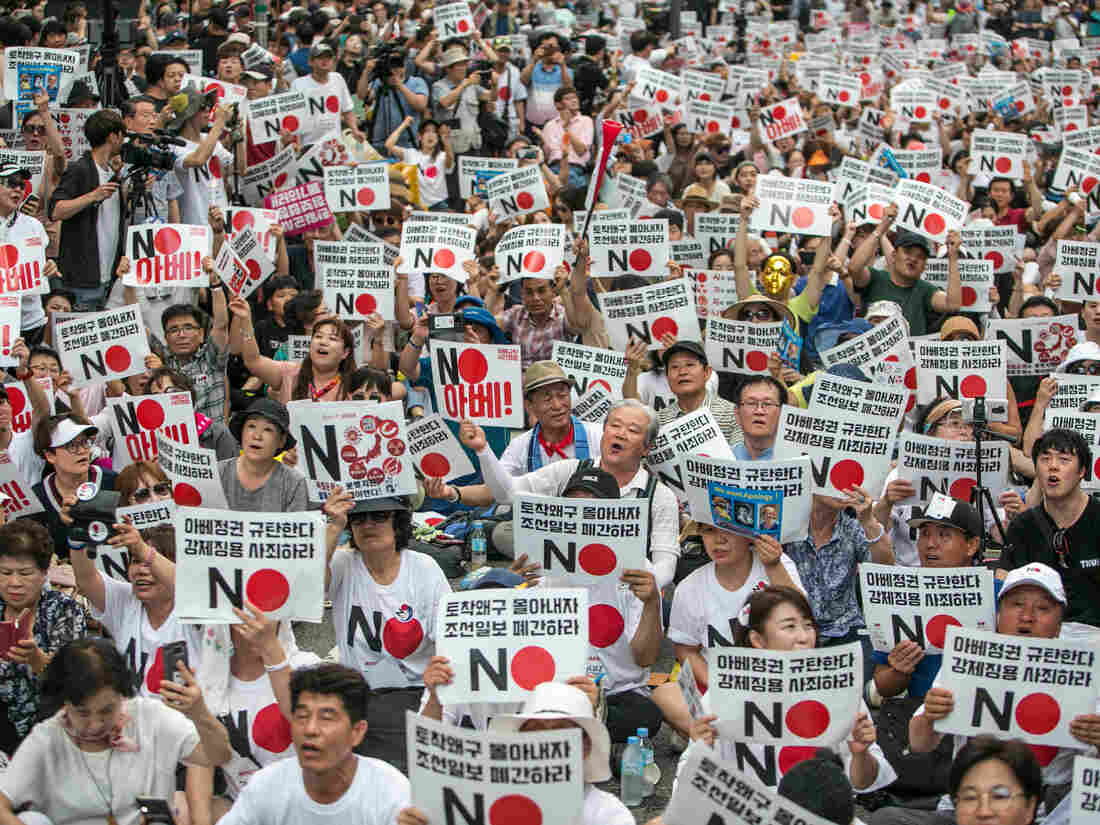 Protesters hold placards reading 'No Abe!' earlier this month during a demonstration against Japan's removal of South Korea from a list of trusted trading partners in Seoul. Jean Chung/Bloomberg via Getty Images hide caption 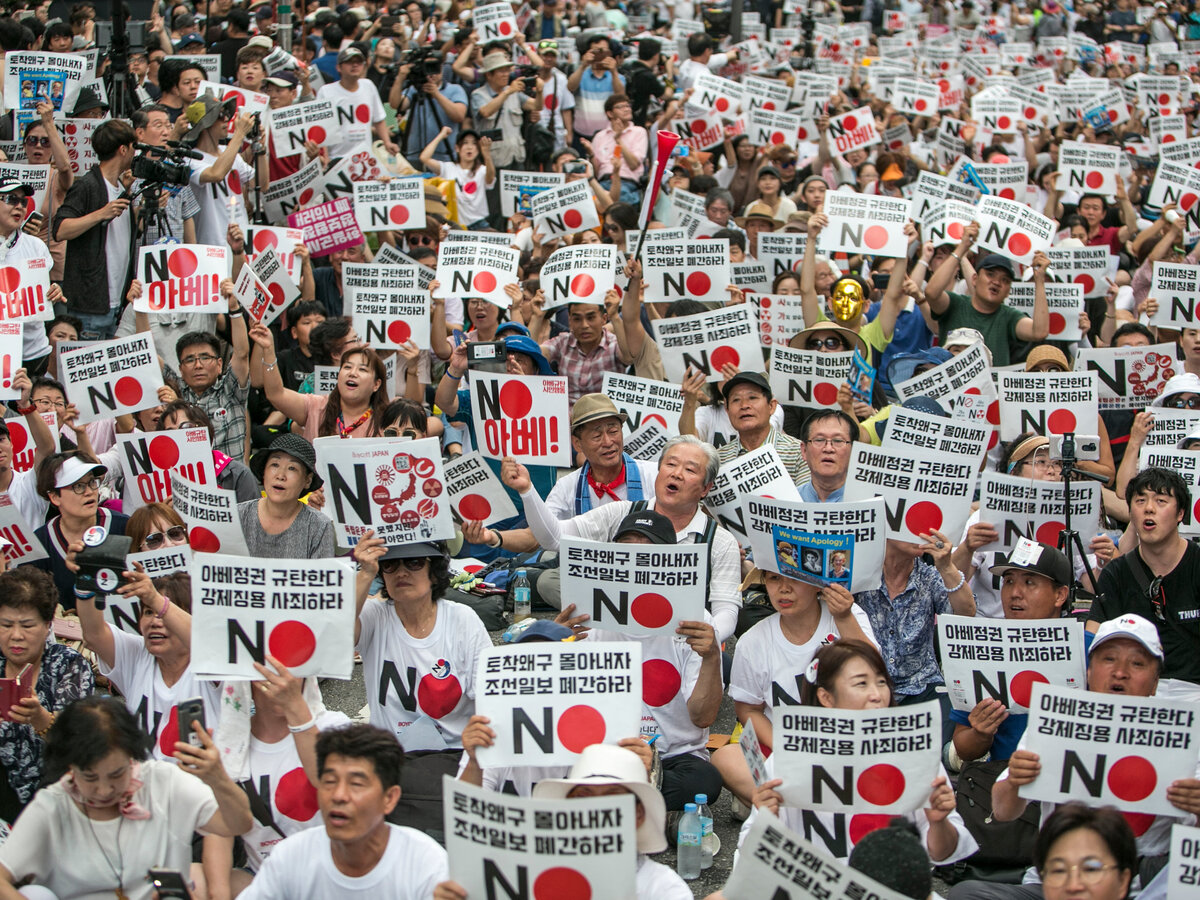 Protesters hold placards reading 'No Abe!' earlier this month during a demonstration against Japan's removal of South Korea from a list of trusted trading partners in Seoul.

Top U.S. defense officials delivered a rare and public rebuke of a top ally in Asia, South Korea, following Seoul's decision last week to pull out of a 2016 intelligence-sharing pact with Tokyo.

That withdrawal was sparked by a bitter dispute between the two countries that began over compensation for Korean victims of war crimes perpetrated by Japan during its decades of occupation of the Korean peninsula, which ended after World War II.

Washington fears that Seoul's move will weaken its system of alliances in the region, just as the post-war security order is facing challenges from regional rivals, including North Korea, whose nuclear and ballistic missile programs have been closely monitored by both South Korea and Japan.

In a joint media briefing the same day at the Pentagon, Defense Secretary Mark Esper and Chairman of the Joint Chiefs of Staff Gen. Joseph Dunford added their expressions of disappointment.

South Korea insists that Washington had prior knowledge of its decision to withdraw from the General Security of Military Information Agreement, or GSOMIA, which U.S. officials hoped would be renewed after it was set to expire later this year.

Schriver contradicted Seoul's assertion, saying the U.S. had been blindsided by the decision.

The incident highlights the difficulty the U.S. faces in playing middleman to the long-running feud between Seoul and Tokyo.

Washington's calling out Seoul may have occasioned quiet glee in Tokyo, says Daniel Sneider, a Stanford University expert on U.S. foreign policy towards Asia. "When they're interacting with the United States, the main thing on their mind," he says of Seoul and Tokyo, "is getting the Americans to agree with them, with their sense of grievance, and putting the responsibility on the other side."

At first, Seoul brushed off Washington's criticism, insisting that the alliance was as solid as ever. According to Korean media reports, they privately summoned American Ambassador Harry Harris and told him that the U.S. should stop upbraiding them in public.

Finally, a South Korean presidential spokesman, speaking on background, acknowledged that Seoul and Washington were not on the same page. "However important an alliance and the need to promote the improvement of relations may be," the official said, "nothing can take priority over national interests of South Korea and its people."

The current rift began with disputes over Japan's use of Koreans for forced labor before and during WWII. That morphed into an economic feud, with both sides downgrading the other's trading status, which has in turn spilled over into military matters.

Meanwhile, other media fretted about the unraveling trilateral alliance of the U.S., Japan and South Korea. However, Cho Byung-jae, the former chancellor of the Korea National Diplomatic Academy, points out that the concern belies the nature of the alliance structure, its inherent weaknesses and how it is often misperceived.

In other words, Cho says, the U.S. has alliances with South Korea and with Japan, but mistrust has kept those two from forming their own alliance. Unlike NATO, which is a collective, the relationship in Asia resembles a hub and spokes, with the U.S. the hub and its allies the spokes.

Japan and South Korea are capable of cooperation, but it's often required nudging from Washington. Case in point is the GSOMIA. The agreement "was concluded by Japan and Korea quite reluctantly," Cho notes, "but with the strong, strong backing from the Obama administration."

"The United States has been trying to put Japan and South Korea into some type of collective security structure for the region since the days of the Korean War," explains Stanford's Daniel Sneider.

"And we have never succeeded in doing that because the two countries simply will not participate in anything that even resembles a military alliance," he says.

Even so, Sneider notes that the pact has allowed South Korea's and Japan's militaries to quietly share data on North Korean missile launches, without having to go through Washington.

And that's a good thing, Sneider says. "When you're dealing with missile launches and intercepts, seconds matter."

During the Korean War, Japan provided a crucial staging base for U.S. and United Nations troops and materiel headed to the peninsula. The U.N. Command-Rear is still based in Japan, and would likely play a major role in any future defense of South Korea.

Amid the rifts in America's Asia-Pacific security structure, analysts caution that an emerging alliance between China and Russia could rise to challenge it. They point to a July 23 joint patrol by Chinese and Russian aircraft over disputed islands claimed by both Japan and South Korea. The joint exercise was widely seen as an effort to probe for weakness in U.S. and South Korean defenses.

"Beijing and Moscow see South Korea as a relatively weak link in the U.S. alliance network in Asia, compared to the two other main U.S. allies, Japan and Australia," Russian scholar Artyom Lukin writes in a recent article.

Cho Byung Jae argues that now is the time for the U.S. to show leadership by carefully managing ties with Tokyo and Seoul, and articulating a clear security policy for Asia.

Instead, he says the Trump administration has threatened to withdraw U.S. troops from South Korea and demanded that Seoul pay a lot more toward the cost of basing U.S. troops there.

"What is the exact cost of the peace?" he asks. "How much money? How can you interpret that in terms of dollars?"

Washington is pressuring South Korea to reconsider its decision to pull out of GSOMIA, something Seoul says it's willing to do — if Tokyo rethinks its export controls.

None of this leaves observers optimistic about saving the pact, which expires in late November.