Accessibility links
Hurricane Dorian: U.S. Mainland Braces As Storm Becomes Category 4 Forecasters warn, "Dorian is anticipated to remain an extremely dangerous major hurricane ... into next week. Florida and Georgia have declared emergencies along the wide possible path of the storm. 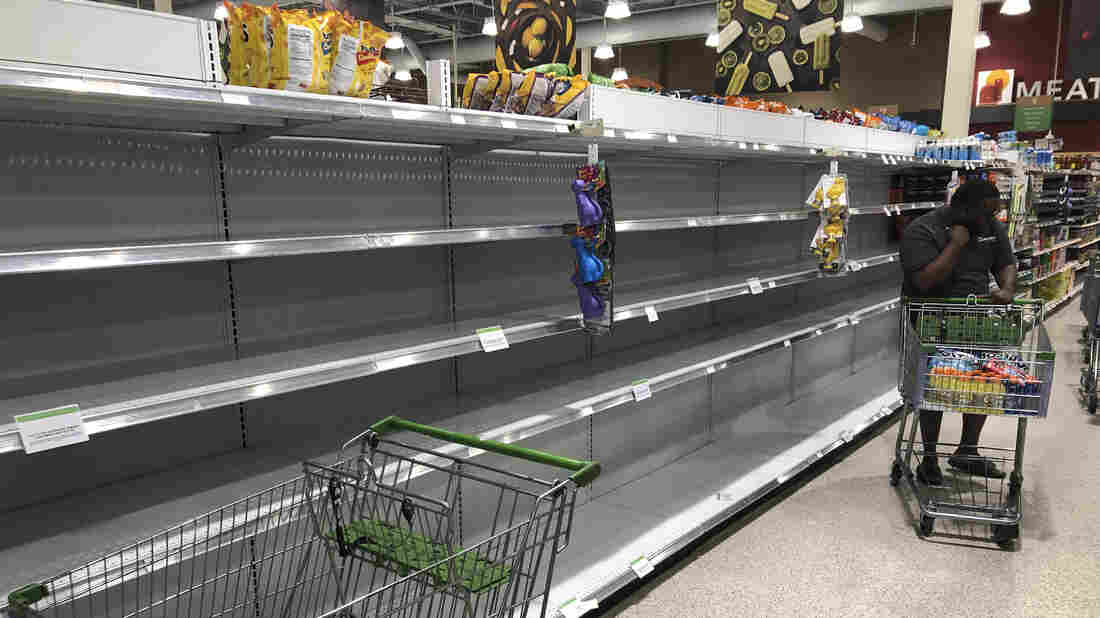 Water was sold out at a grocery store in North Miami, Fla., on Friday as residents heeded warnings to stockpile a week's worth of food and supplies before Hurricane Dorian arrives on Monday. Wilfredo Lee/AP hide caption 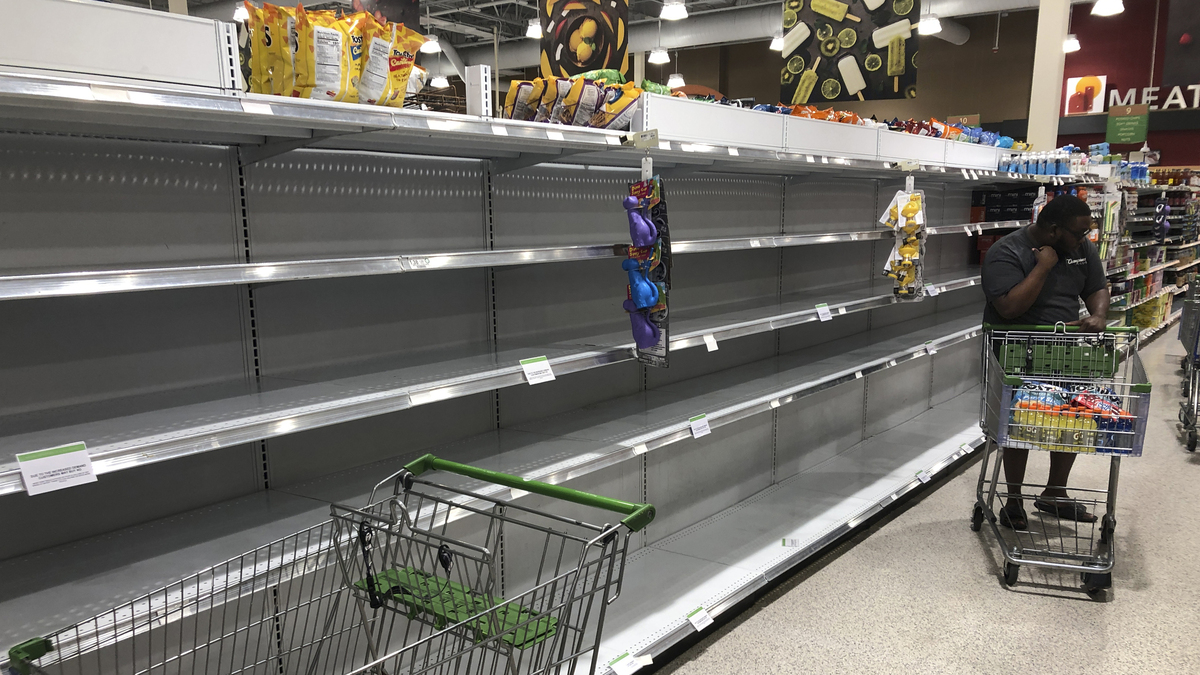 Water was sold out at a grocery store in North Miami, Fla., on Friday as residents heeded warnings to stockpile a week's worth of food and supplies before Hurricane Dorian arrives on Monday.

Hurricane Dorian, now a category 4 storm, was heading across the Atlantic toward the Bahamas and the Florida coast on Saturday — and the National Hurricane Center predicts tropical storm winds could reach the Bahamas as soon as Saturday night.

The NHC says "life-threatening storm surge and devastating hurricane-force winds" are possible in the northwestern Bahamas.

In Florida, life-threatening storm conditions are also possible along portions of the east coast of the state by early next week, but the NHC says that since Dorian is projected to slow down and turn northward as it approaches the coast, "it is too soon to determine when or where the highest surge and winds will occur."

The latest projections of the storm's path show a decreased likelihood that Dorian's center will make landfall in Florida. But the hurricane center stressed that even if the center of Dorian stays offshore, the storm could still have significant impacts.

The threat of dangerous storm conditions is not just limited to Florida. According to the NHC, Dorian could now bring strong winds and life-threatening storm surge along the Georgia and South Carolina coasts as it moves north next week.

Significant impacts could also occur even if the center of #Dorian stays offshore. With the change in the forecast, the risk of strong winds and life-threatening storm surge is increasing along the coasts of Georgia and South Carolina during the middle of next week. pic.twitter.com/7yI3bxa8ti

The government of the Bahamas has issued a hurricane warning for the northwestern Bahamas. The NHC says Dorian could reach the Bahamas by Sunday, and could be near the east coast of Florida by Monday.

Dorian was about 280 miles east of the northwestern Bahamas and about 445 miles east of West Palm Beach, Fla., according to the hurricane center. The storm was moving west-northwest at 12 mph, with maximum sustained winds of 145 mph.

One NOAA hurricane model showed Dorian bringing between 1 and 2 feet of rain "for basically every coastal county from Miami to North Carolina," said meteorologist Eric Holthaus. "Combined with storm surge and exceptionally high new moon tides, this would be a coastal flooding catastrophe." 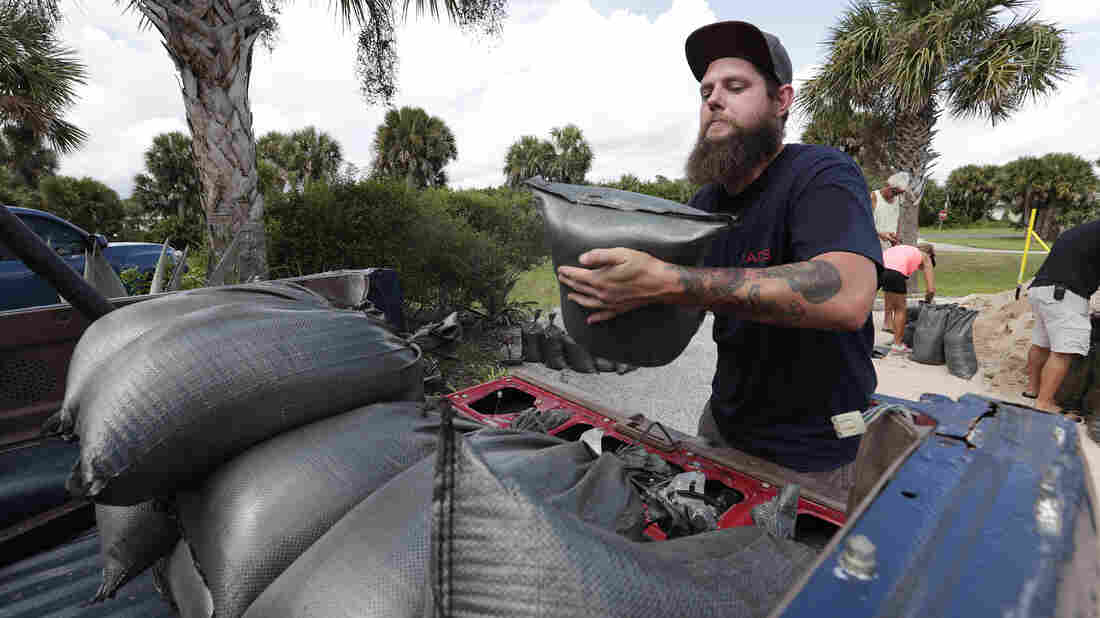 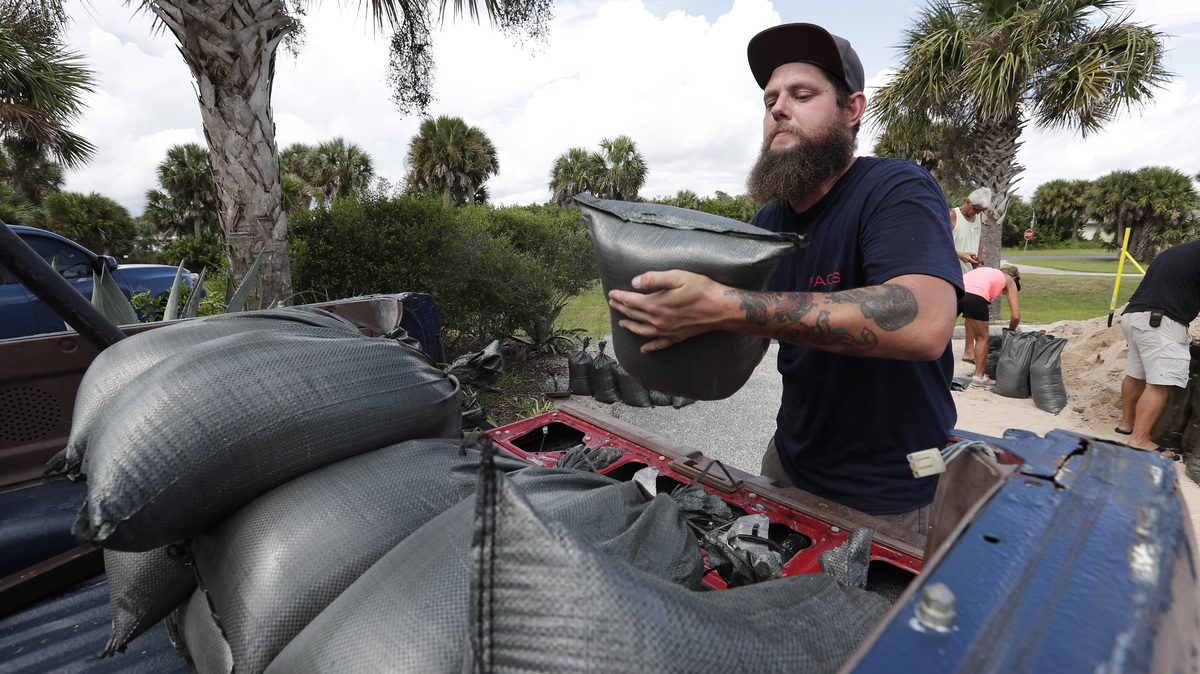 In Flagler Beach, Fla., Matt Rohrer gets sandbags on Friday to take home to prepare for Hurricane Dorian.

The hurricane center says Category 4 storms are "major" hurricanes, with sustained winds of at least 130 mph on the Saffir-Simpson wind scale.

On Friday afternoon, the Bahamas Meteorology Department issued an alert on Dorian that warned the center of the storm "will move near or over the northwest part of the island on Sunday." Ten to 15 inches of rain are expected to fall over the northwest Bahamas.

A Saturday morning dispatch from the Bahamas Meteorology Department warned that a dangerous storm surge accompanied by large and destructive waves up to 15 feet can be expected near the shores of Eleuthera, Abaco and Grand Bahama on Sunday into Monday.

On Friday, Trump granted DeSantis' request for an emergency declaration in Florida, authorizing the Federal Emergency Management Agency to provide equipment and resources to save lives, protect property and alleviate "the hardship and suffering caused by the emergency on the local population," according to the White House.

"We're fully mobilized," Greg Oravec, the mayor of Port St. Lucie, Fla., told NPR. "At this point, everyone should be taking Friday and Saturday and putting up their shutters." He emphasized that residents should protect their structures from gusty winds and have seven days' worth of food, water and medicine stored.

Although the storm's track is still uncertain on the Florida Peninsula, Trump's Mar-a-Lago resort in Palm Beach and the Trump Doral resort near Miami are in the vicinity of Dorian's projected path. The Miami Herald reported that all employees of Mar-a-Lago except for security personnel were sent home for the duration of the storm. Doral's pool and other amenities were reportedly closed, with generators ready to supply backup power if necessary.

Trump canceled his plans to travel to Poland this weekend as the hurricane neared.

Dorian's approach comes days after the Trump administration announced that it would divert $271 million in funds from FEMA — including $155 million from the agency's disaster relief fund — to other units in the Department of Homeland Security in an effort to support the president's border enforcement priorities.

Florida Power & Light said it has almost 5,000 workers ready for the storm and that it was working to get additional crews to help customers who lose power.

Photographs showed stores with cleared-out shelves as people got ready for the storm's arrival. Home Depot announced Thursday that it had sent more than 160 truckloads of supplies to stores to help people prepare.