Accessibility links
Police Bear Brunt Of Public Anger As Hong Kong Refuses To Accept Protesters' Demands One of the main results of the Hong Kong government's strategy has been to put a huge burden on the city's police force, diverting the public's anger at the government onto the constabulary. 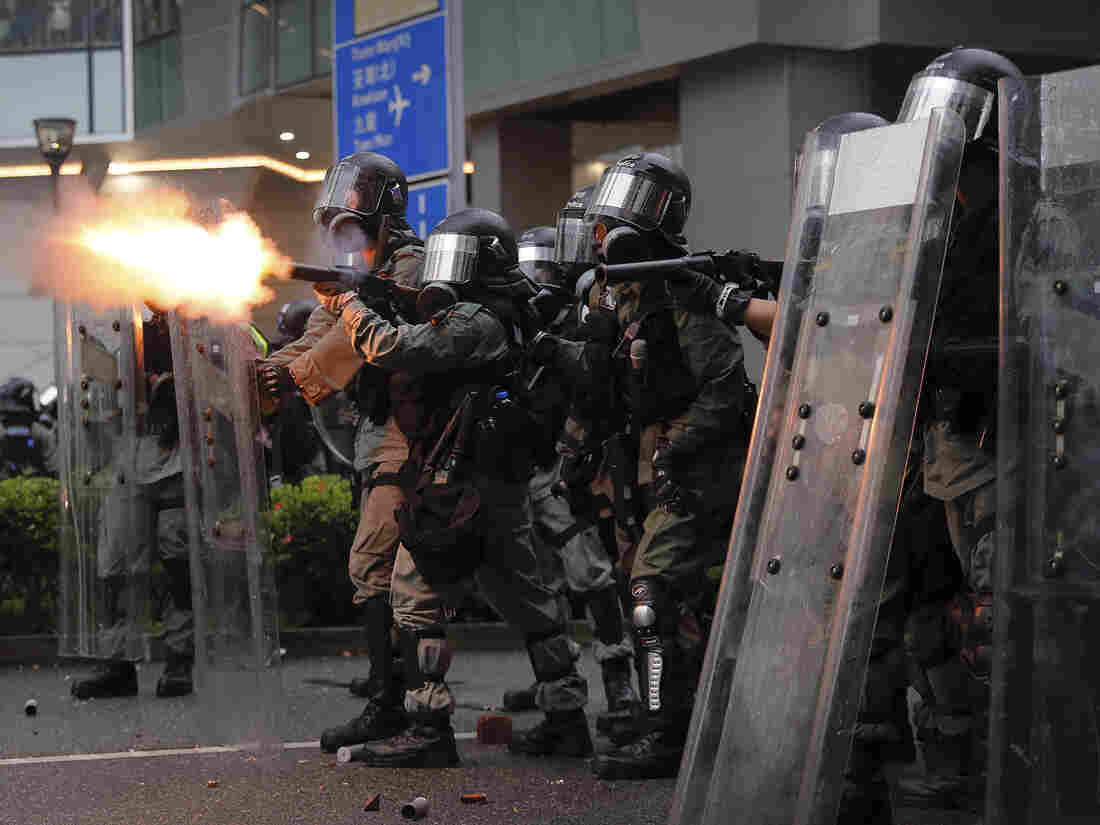 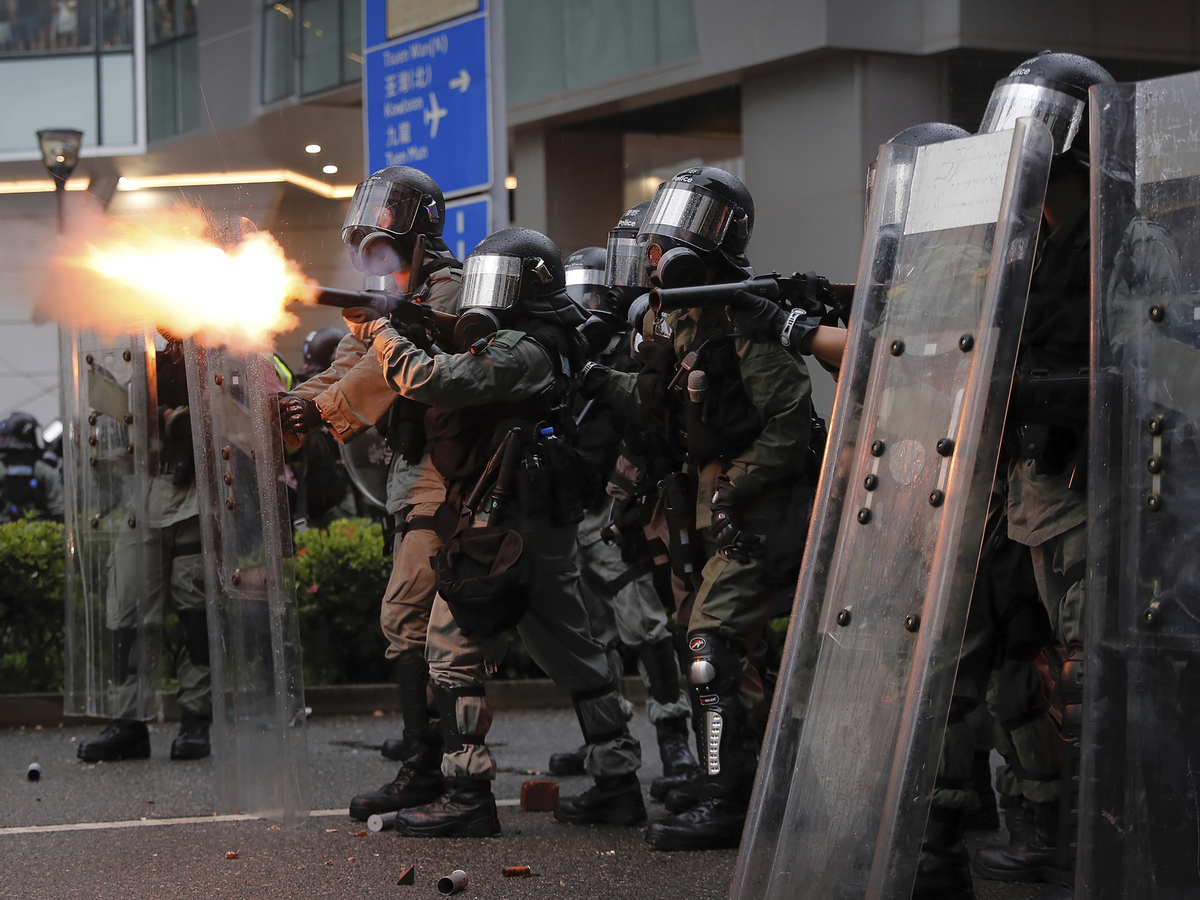 The arrests by Hong Kong police of several prominent activists and lawmakers this week are the latest moves in a strategy outlined by Chief Executive Carrie Lam: refusing the protesters' demands for government accountability and democracy, while using the law and the police to stifle the protests.

Those arrested include Joshua Wong and Agnes Chow, leaders of the activist group Demosisto, who played leading roles in the 2014 pro-democracy Umbrella Movement. Andy Chan, the leader of the banned separatist Hong Kong Nationalist Party was also arrested this week. They are among some 900 people arrested since protests began in June, sparked by public anger at a bill that would allow criminal suspects to be extradited to mainland China and now including broader calls for democracy and government accountability.

Wong and Chow were charged with involvement in an unlawful assembly, and were released on bail. The assembly in question was the surrounding of police headquarters in the Wanchai district by thousands of protesters on June 21.

John Tse Chun-chung, chief superintendent of the police public relations branch, said the arrests were justified. "We take a zero-tolerance approach to all violent incidents and all arrests were made based on enough evidence," he told reporters on Friday.

One of the main results of the government's strategy has been to put a huge burden on the city's police force, diverting the public's anger at the government onto the constabulary.

Allegations of brutality and corruption have marred the force's longstanding reputation for professionalism and impartiality. An investigation into brutality has become one of the protesters' core demands.

The situation now "is entirely a political problem. This is a problem that the government should be addressing with the people" through negotiations, says Steve Vickers, a business risk and security consultant who served as head of the Criminal Intelligence Bureau of the Royal Hong Kong Police Force during British colonial rule.

"Sadly, none of that is currently occurring," he says, "and the only contact that the people of Hong Kong have had with their government is the police."

Lam has said she's not ignoring the protesters — she just refuses to accede to their demands. This has led to reports that Beijing will not allow her to concede, something that would be a violation of Hong Kong's mini-constitution, the Basic Law. It stipulates that Hong Kong's government manages the city's affairs autonomously, with the exception of diplomacy and defense, which Beijing handles.

In Hong Kong, Moderate And Radical Protesters Join Forces To Avoid Past Divisions

Anger at the police, who are perceived as following instructions from Beijing, is just one example of what analysts say is a breakdown of trust between Hong Kong residents and the city's institutions — from its civil service to its courts, schools and hospitals.

"It seems that the police is defending the government" and is no longer impartial, argues Hong Kong-based barrister Senia Ng. "I think it's a very basic principle that in a civilized society like Hong Kong, the police, they are there to protect the citizens and not to attack the citizens."

Ng is part of a team of lawyers offering pro bono legal aid to arrested demonstrators. She says this has given her an inside look at what she considers the increasing use of "dirty tactics" by Hong Kong police, such as obstructing or delaying protesters' access to lawyers.

"We have heard and seen many protesters being hit and assaulted by the police in the police station," she says, "which is totally inappropriate."

A spokesman for the Geneva-based U.N. Human Rights Office said earlier this month that there is "credible evidence" of law enforcement officials Hong Kong police of using force in ways that violate "international norms and standards."

In almost daily press conferences, the police have denied allegations of abuse. They have justified their use of tear gas in subways, the deployment of undercover police posing as demonstrators and beating protesters who had stopped resisting. They have rejected allegations of sexual abuse of protesters.

The police have consistently argued that they have used the minimum force necessary to protect themselves and stop illegal activity. They also argue that they continue to respect citizens' rights to free speech and assembly, despite banning marches or rallies — which they say they've done out of concern for public safety.

Ng concedes that the situation now in Hong Kong remains a far cry from conditions in mainland China, where police have sweeping powers and many lawyers are disbarred or jailed for defending opponents of the government.

"I do believe that our judicial system is still functioning properly," she says. "And it is probably the last line of protection," she says, for citizens' basic rights.

Vickers argues that Hong Kong police's handling of protests has not been egregiously violent in comparison with police in other countries. Vickers was in New York City when Occupy Wall Street protesters clashed with police, and "I can tell you," he says, "that was whackety-whack. There was no messing around, there was a lot of baton usage."

Still, he believes "the police are still very much in control. And at this point ... I don't think there's any need for any additional, external assistance," including from mainland Chinese security forces.

Hong Kong police have scored a few "own goals," Vickers says, chiefly in its overly lenient handling of local gangs, known as triads, some of which have attacked the protesters. This has led to accusations that the police are in cahoots with the gangsters.

"Triads are heavily engaged in gambling, prostitution and organized crime. They were our targets," says Vickers, whose job during British colonial rule, which ended in 1997, was to infiltrate and put them out of business.

But "China has always viewed them as semi-patriotic organizations, and the truth is that the foot's come off the pedal since 1997," he says. "So triads have been allowed to get away with activities that they perhaps wouldn't have done previously."