Accessibility links
States Upgrade Election Equipment, But See 'A Race Without A Finish Line' Pennsylvania and other states are working through grants from Congress to upgrade their voting machines and other equipment. Advocates say more work is needed — and billions more dollars. 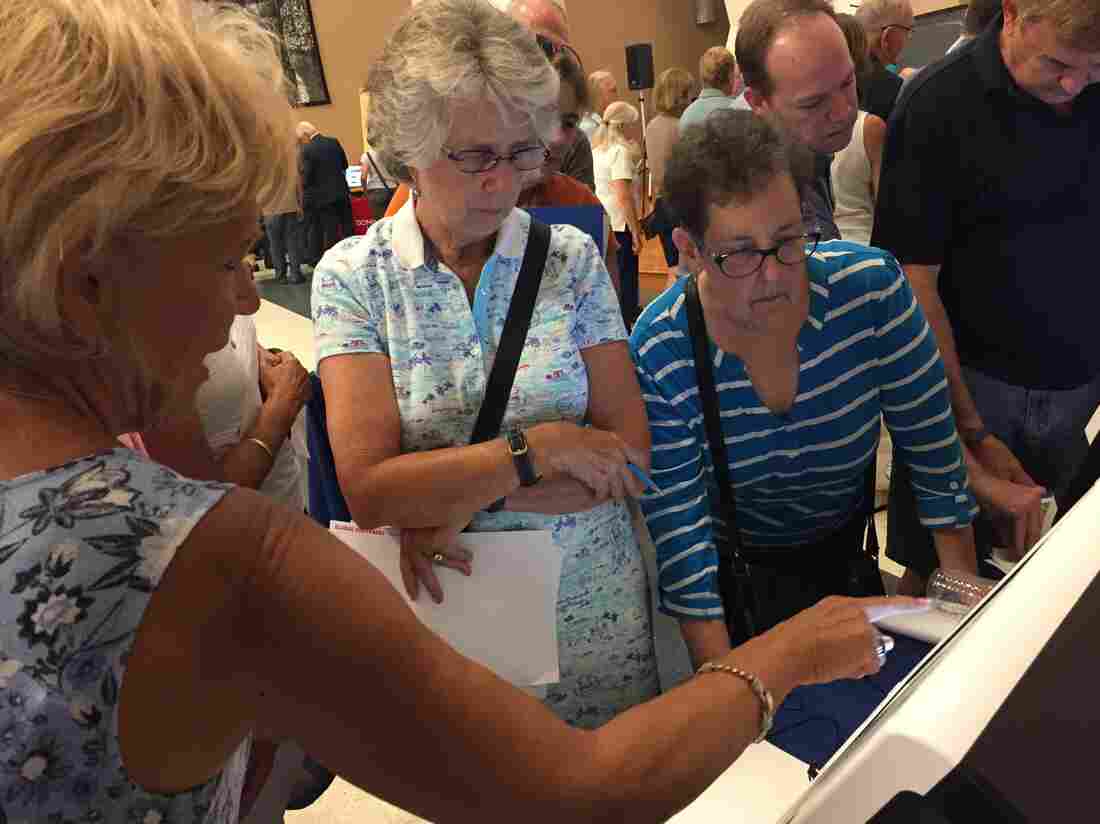 Attendees in Bucks County, Pa. test-drove new voting machines at an event aimed at helping the county decide which equipment to buy. Security is a major focus in the 2020 presidential race. Pam Fessler/NPR hide caption 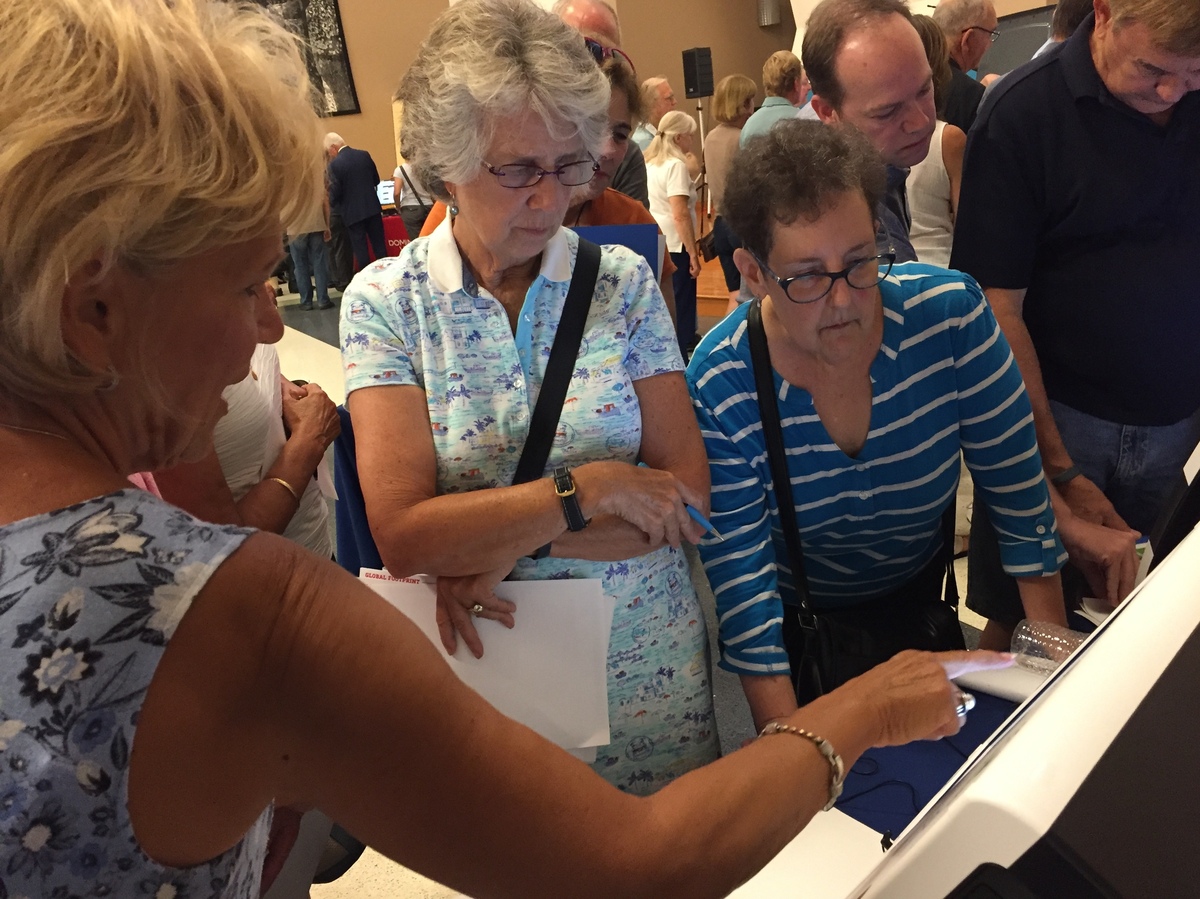 Attendees in Bucks County, Pa. test-drove new voting machines at an event aimed at helping the county decide which equipment to buy. Security is a major focus in the 2020 presidential race.

Their main focus is security, after Russians tried to hack into U.S. election systems in 2016. Intelligence officials have warned that similar attacks are likely in 2020, from either Russia or others intent on disrupting U.S. elections.

Federal, state and local authorities are trying to improve the security of the nation's voting systems before that happens. One way they're doing that is by purchasing more machines that produce paper ballots, which can be used to verify results in the event of a cyberattack on electronic systems.

The Brennan Center for Justice estimates that nearly 90 percent of Americans will cast their ballots on paper-based systems in 2020, compared with 80 percent in 2016.

That still means about 16 million voters will use paperless machines.

"Election security experts and intelligence community members agree that paperless voting machines are insecure and that we need to transition to paper-based voting systems across the country to ensure that — in the event of a question or a concern — we can go back and look at the paper records for every vote cast," says Liz Howard of Brennan's Democracy Program.

Sprint in the commonwealth

Pennsylvania is among the states making major changes in response to those concerns. Gov. Tom Wolf, a Democrat, has ordered all 67 counties to replace their existing machines by next year with ones that produce a voter-verifiable paper record.

That's a massive and costly undertaking, with an estimated price tag of as much as $150 million — but officials believe most of the counties are on track to make the change before the state's primary in April.

About 200 residents of Bucks County, just north of Philadelphia, turned out at a local community college recently to weigh in their county's machine-buying decision.

It was a little like a speed-dating event, as the residents moved around a large meeting room checking out one display after another. They held paper surveys, on which they could mark which machines they liked best and why.

Dolores Mucci, an election judge from Bensalem Township, came with some fellow poll workers who were especially interested in how easy the equipment would be for voters to use.

"If voting becomes too hard for someone, they're not going to vote " said Mucci.

She told a sales representative from Dominion Voting, one of the five vendors competing for the contract, that she liked one of the systems he showed her. It was a machine that allows voters to make their choices using a touchscreen. When the voter is done, the machine prints out the marked paper ballot, which is then fed into a scanner to be counted.

Mucci wasn't as keen on another option he showed her, a pre-printed paper ballot that voters mark the old-fashioned way: with a pen.

Nearby, another vendor — Election Systems & Software — showed a third option, a big touchscreen machine that prints the voter's choices on a blank piece of paper, which is then displayed in a window for review.

"If it's how you want to vote, you press another button," explained Kathy Dornan. "It tabulates it and drops it into a ballot box. So that one is one-stop shopping instead of a two-fold system."

One event-goer nodded approvingly: "That eliminates a step, then."

Paper is only the beginning 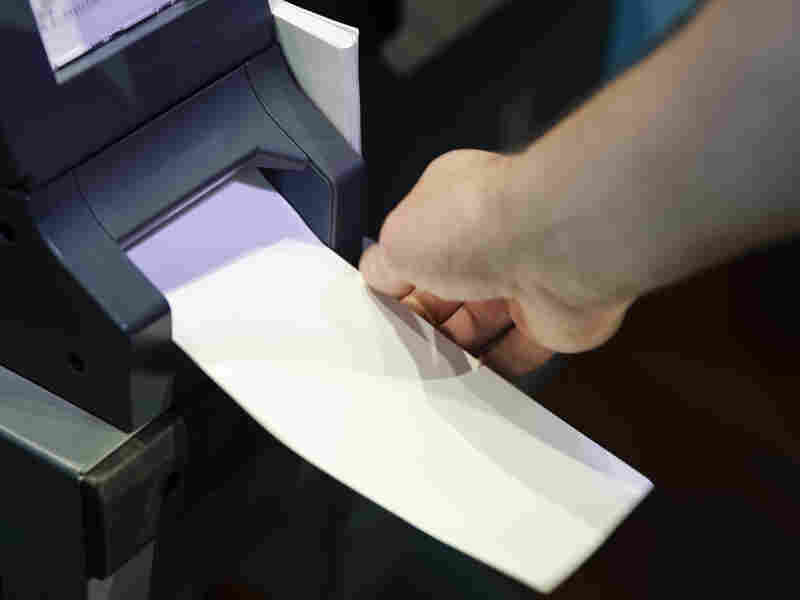 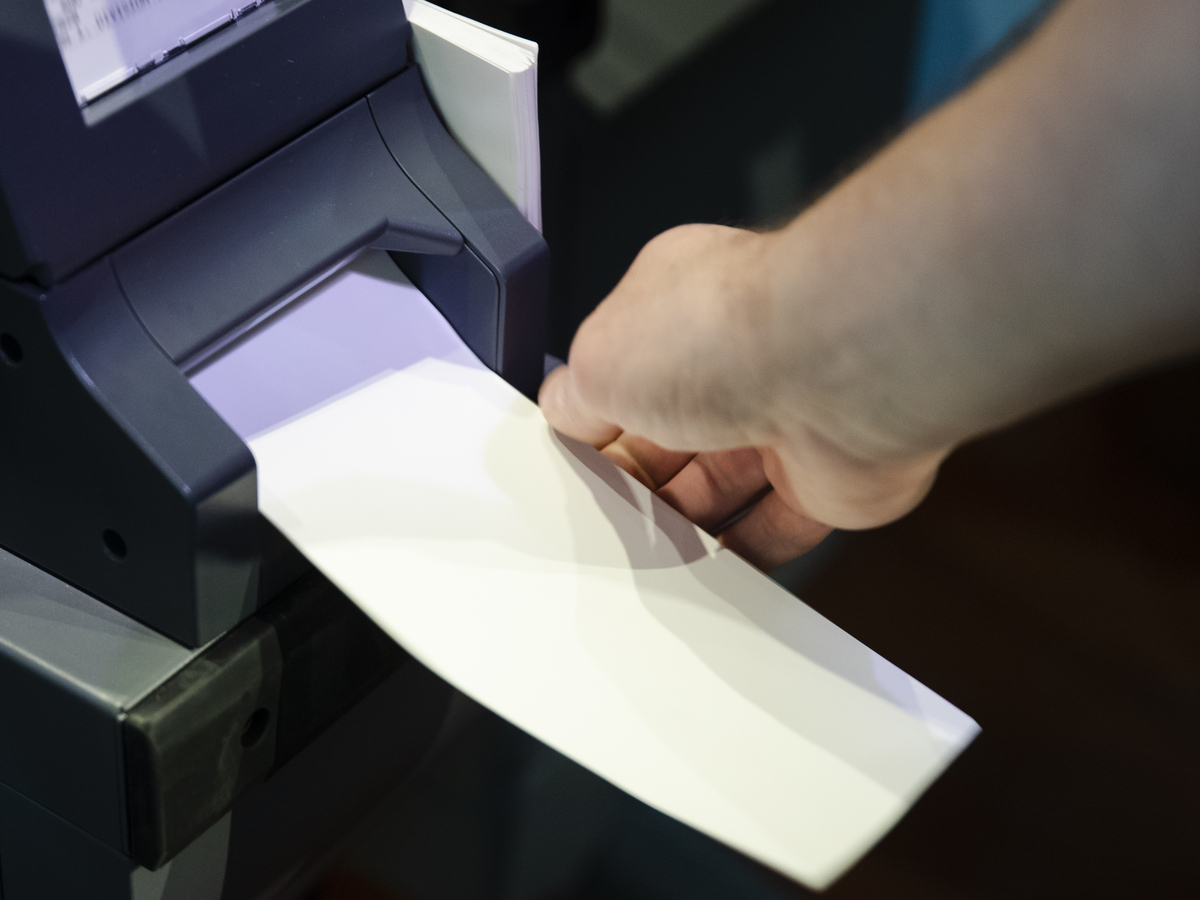 An ExpressVote XL voting machine demonstration in Philadelphia. Advocates say paper ballots are good, but not sufficient, in a new era of security challenges.

Eliminating steps was pretty popular with the Bucks County crowd, although many security experts believe that anything short of a hand-marked ballot presents a risk.

Still, Marian Schneider, a former Pennsylvania election official, thinks whatever the counties decide, this state is in much better shape than it was in 2016, when more than 80 percent of its machines had no paper records.

"You have to check the paper afterwards. You have to randomly sample those ballots and make sure that the results that the software reported matches what's on the paper ballots," she says.

She's talking about something called a risk-limiting audit, which is becoming an increasingly popular way to verify election results. Pennsylvania is among a dozen states now testing the idea.

The changes are all part of a multi-pronged national effort to protect next year's elections.

Kathy Boockvar, Pennsylvania's acting secretary, says her state, like others, has also been working with the U.S. Department of Homeland Security and has participated in tabletop exercises to practice responding to cyberattacks.

Boockvar's office also has stepped up coordination with emergency managers and is now in closer communication with other states and the federal government about potential risks.

But Boockvar also warned about the need for a new attitude about administering elections given that the state of cyber-threats evolves as quickly or quicker than states' technology or safeguards.

"It's a race without a finish line," she says. "So the key is that we have to be building and reinforcing walls faster than those trying to tear them down."

Authorities could do more

Like other election officials, Boockvar says Pennsylvania could use more resources.

Congress approved $380 million last year for election security, but Pennsylvania received only $14 million of that. Liz Howard of the Brennan Center, says her group estimates that states could easily use another $2 billion over the next five years, especially to protect local election offices which tend to be more vulnerable.

"With over 8,000 election jurisdictions across the country, there's some not insubstantial portion of them that do not have IT support at the local level," she says.

Howard also notes that some states have used their security funding to hire specialists they call "cybernavigators," IT professionals who travel to local election offices to help them figure out whether their systems are vulnerable — and what steps need to be taken to close the gap.

Still, at the Bucks County demo, security was clearly a secondary concern for many of the residents, like Milo Morris.

Some Noncitizens Do Wind Up Registered To Vote, But Usually Not On Purpose

What he wants are machines that are easy to use and fast.

"I don't want to see voters get bogged down once they get into the voting booth. You know, cause all that does is discourage the practice altogether," he said. "And we need everybody to come out and vote."

Bucks County is expected to make a decision on what machines to buy by the end of the year.