Accessibility links
'Palestine + 100' Review: Stories Both Playful And Painful A new anthology invites Palestinian writers to imagine their homeland in 2048 — 100 years after the creation of Israel. The stories are inventive, dextrous, painful, and even sometimes playful. 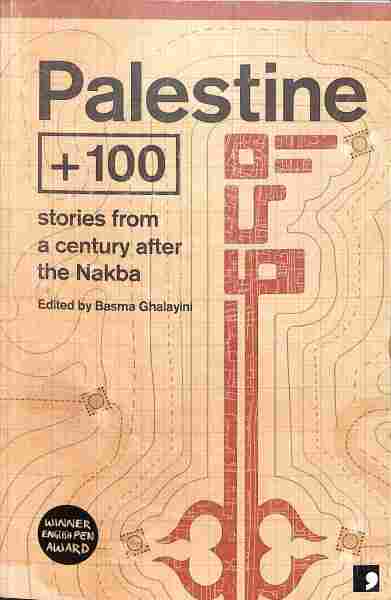 Stories from a Century After the Nakba

A few years ago I reviewed Iraq + 100, a project which invited its contributors to write stories set 100 years in Iraq's future. It was conceived as an imaginative springboard for Iraqi writers to potentially launch themselves beyond the enduring trauma of waves of invasion and devastation — but because science fiction stories set in the future are always in some way about our present, the collection became a multi-voiced testament to the fact that you can't project a future without first reckoning with the past.

Comma Press has followed that collection up with Palestine + 100, an anthology edited by Basma Ghalayini in which twelve Palestinian authors write stories set 100 years after the Nakba — Arabic for "catastrophe" — during which, as Ghalayini writes in her moving, thoughtful introduction, "Israel declared itself a new-born state on the rubble of Palestinian lives." Thus where Iraq + 100 looked towards the year 2103, the stories in Palestine + 100 look towards 2048, and the bulk of the work isn't about extrapolating a future so much as recognizing, fighting, and establishing narratives about the past. The choice of subtitle — "stories from a century after the Nakba" — exemplifies this, drawing attention to the fact that for Palestinians (and many Israelis), May 15, 1948 is not a date to celebrate, but to grieve.

In Palestine + 100, memory and imagination are contested territories. Samir El-Youssef's "The Association," translated by Raph Cormack, kicks off with the murder of a historian; the narrator observes that "Since the 2028 Agreement, the people of the country — all the different sects and religions, Muslim, Christian and Jewish — had decided that forgetting was the best way to live in peace." In Saleem Haddad's "Song of the Birds," a young girl lives in a beautiful simulation haunted by the vicious, broken reality it obscures. In Ahmed Masoud's "Application 39," two young men imagine a Palestinian bid for the Olympics as a joke — and find themselves in the tormented midst of trying to make that a reality, with all the consequences it entails. In Tasnim Abutabikh's "Vengeance" the plot is evenly divided between one man's elaborate pursuit of revenge against a neighbor he thinks has wronged him — and that neighbor's heartbroken revelation that the man had the past all wrong. In almost all these stories there is a doubled, troubled vision, that never resolves so much as it fractures further.

The stories are inventive and dextrous, as brilliant as they are painful — and sometimes even playful. As often as I wept, reading this book, putting it down and walking away from it for days at a time, I laughed, too.

Beyond their shared premise, the stories are inventive and dextrous, as brilliant as they are painful — and sometimes even playful. As often as I wept, reading this book, putting it down and walking away from it for days at a time, I laughed, too, at witty turns of phrase, at surprising goofiness, at a shrugging resilience. There's also a remarkable compassion for Israelis, for the Israeli experience of being settler-colonists, the psychological damage that entails: In "The Key" by Anwar Hamed, translated by Andrew Leber, the Israeli protagonist grants a great deal of power to Palestinian memory, saying "My grandfather feared those photographs of people holding keys more than any arms deal being signed by neighboring countries." In Emad El-Din Aysha's "Digital Nation," the denouement involves one character asking another, "do you think you are the only member of the guardian class with a troubled conscience?"

I have often wondered, reviewing work that hits as close to home for me as this does, what your average reader, unaware of the history of the region, would make of it — whether they'd be more or less affected by a boy praying to be turned into a super hero so that he can protect his sister, a girl dreaming of her suicided brother. I don't know the answer to that. But I do know that as difficult as this book was for me to read, I'd do it again and again — out of warmth and admiration as well as solidarity.