Accessibility links
Nearly 4 Weeks Into India's Clampdown, Kashmiris Describe Protests, Jail, Uncertainty The government says its priorities are "restoration of normalcy and deepening of democracy" in Indian-controlled Kashmir. But people who have left the region this month paint a different picture. 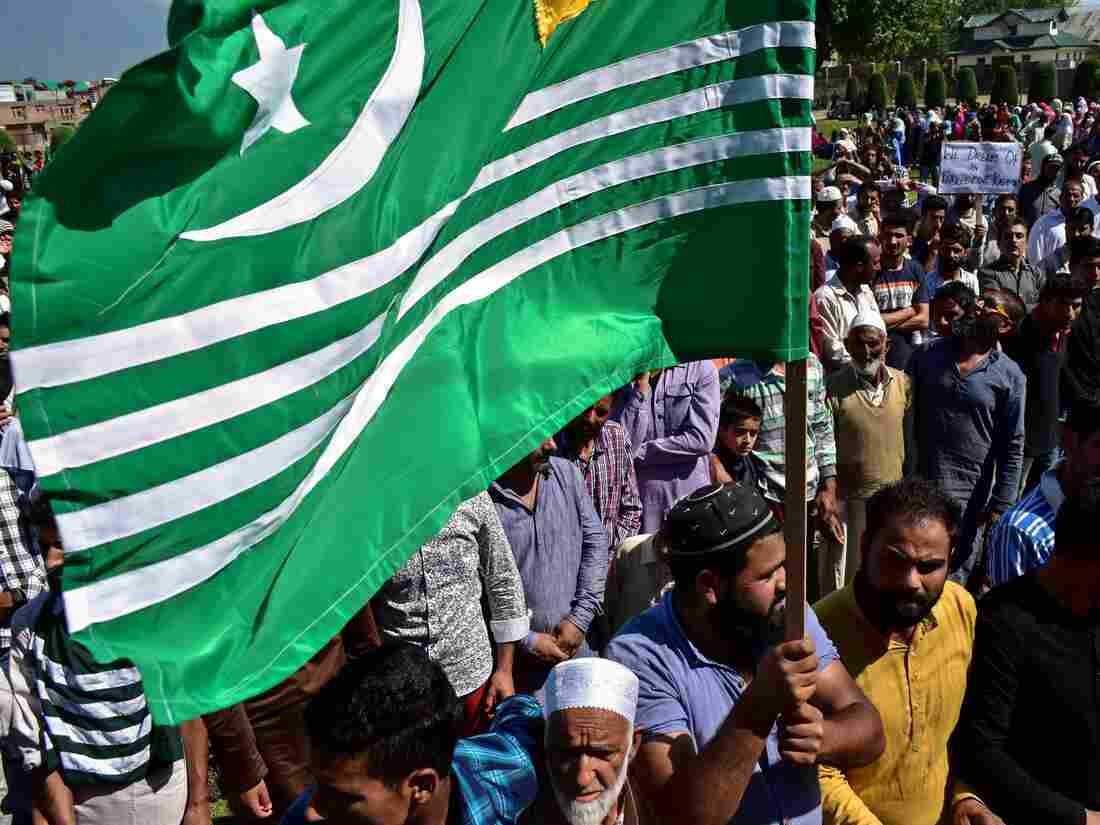 A protester holds a flag during a rally in Srinagar following the government's decision to do away with Indian-administered Kashmir's special status. SOPA Images/SOPA Images/LightRocket via Getty hide caption 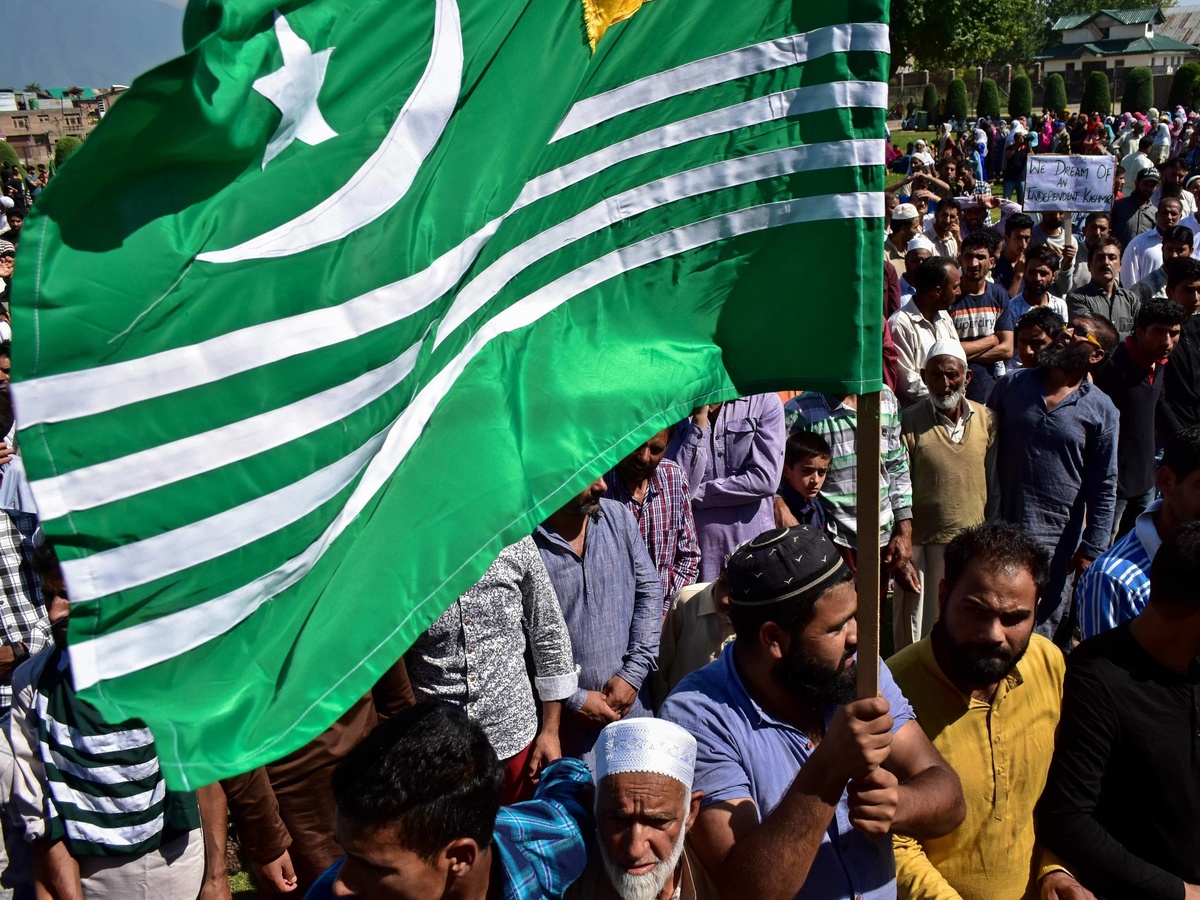 A protester holds a flag during a rally in Srinagar following the government's decision to do away with Indian-administered Kashmir's special status.

On the eve of India's surprise Aug. 5 takeover of Kashmir, Sanna Shah was sitting cross-legged on a silk carpet, trying to enjoy the folk singers performing at her cousin's wedding in the state's summer capital, Srinagar.

Nobody could concentrate on the music. Tens of thousands of Indian troops were pouring into Kashmir, already a heavily militarized area. Wedding guests were increasingly worried, trying to figure out what was going on.

"Every few hours, there would be some sort of rumor," says Shah, in her early 30s. "We left my cousin's wedding early, specifically because of this panic spreading about a curfew being imposed."

Shah was scheduled to fly the next day to New York City, where she works as an architect. After the wedding was cut short, she started texting friends in the U.S., and her cellphone suddenly died — and not because the battery had run out. Moments later, the Internet, landlines and cable TV all went out. Indian authorities had imposed a communications blackout.

Shah was one of the first people to travel out of Kashmir the next day. She was able to use her plane ticket as a curfew pass, as her uncle drove her to Srinagar's airport. With security personnel out in force, it was not an easy drive.

"As soon as we backed out of our property, we were immediately met with these small boulders and barbed wire. Every thousand feet, we encountered paramilitary forces," Shah recalls. "Scuffles were breaking out, and we had to find roundabout ways to avoid confrontation." 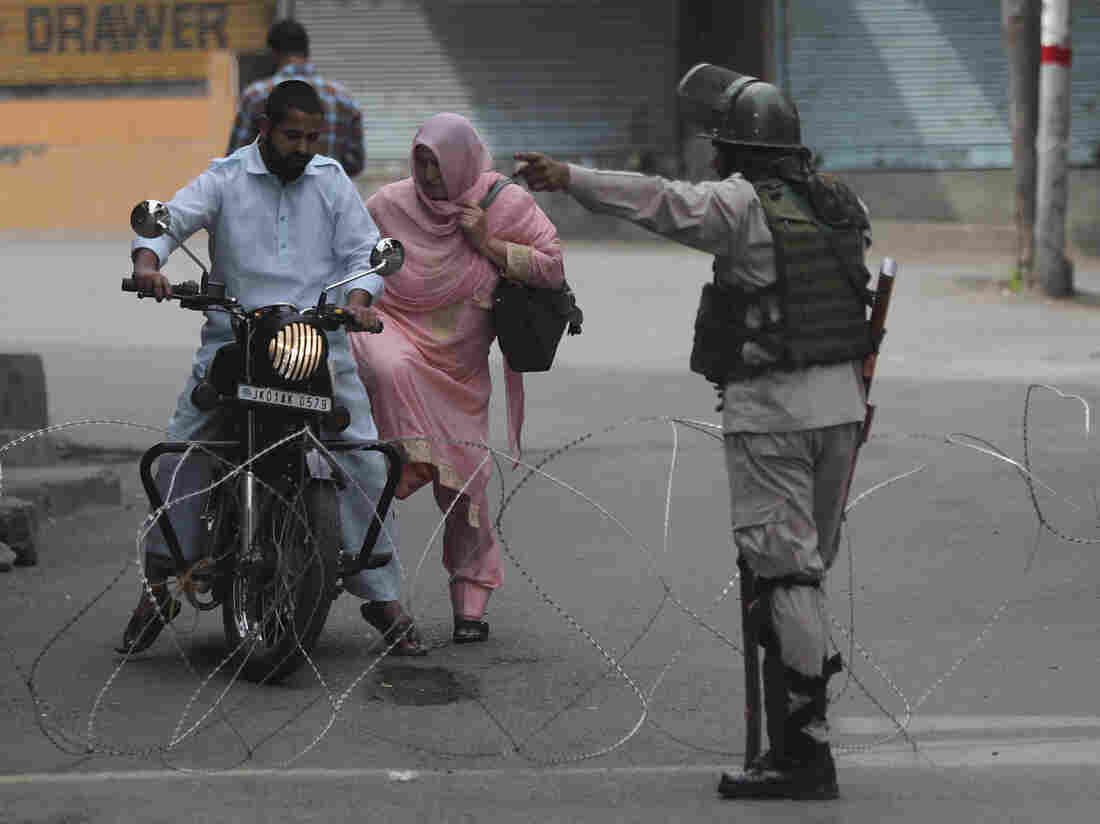 An Indian paramilitary soldier asks a Kashmiri couple on motorcycle to leave at a temporary checkpoint during restrictions in Srinagar, Indian-controlled Kashmir, on Friday. Mukhtar Khan/AP hide caption 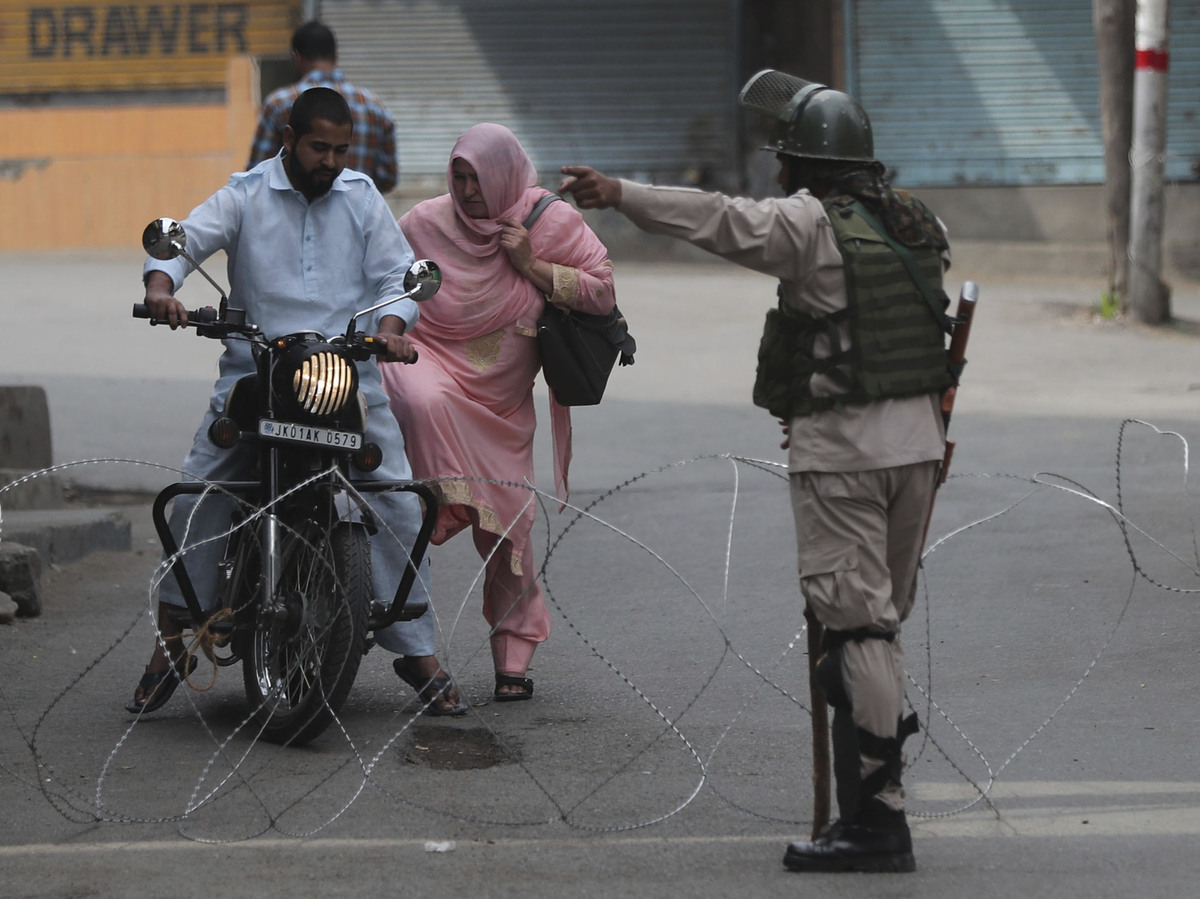 An Indian paramilitary soldier asks a Kashmiri couple on motorcycle to leave at a temporary checkpoint during restrictions in Srinagar, Indian-controlled Kashmir, on Friday.

Since Shah's return to New York, she's been devouring news about Kashmir — news that her relatives there can't access. Her family's cellphones, Internet and TV are all still down.

It's been nearly four weeks since India's Hindu nationalist government revoked the special autonomy of its only Muslim-majority state, Jammu and Kashmir. The government says things are now returning to normal there. But people traveling out of the state paint a very different picture.

Kashmir's autonomy was enshrined in India's constitution. The government of Prime Minister Narendra Modi unilaterally amended the constitution to remove Article 370, which had given Kashmiris special rights to property and government jobs in their region.

The move has prompted questions from legal experts and outrage from neighboring Pakistan, which controls a smaller, western portion of the Himalayan territory but claims the entire region (as does India).

Some Indian journalists and activists have traveled to the region and reported back, but because of the communications blackout, it's been difficult to gauge how Kashmiris there are faring. Opposition politicians who tried to visit and see for themselves were forced to return to New Delhi when they landed at the Srinagar airport on Aug. 24. The government has failed to grant permission for foreign journalists, including from NPR, to travel to the region.

The governor of Jammu and Kashmir, Satya Pal Malik, told reporters in a televised news conference Wednesday that most landlines in the region are working again, and cellphone service was being restored in Jammu, a Hindu-majority area. The "restoration of normalcy and deepening of democracy" are the government's priorities, he said. 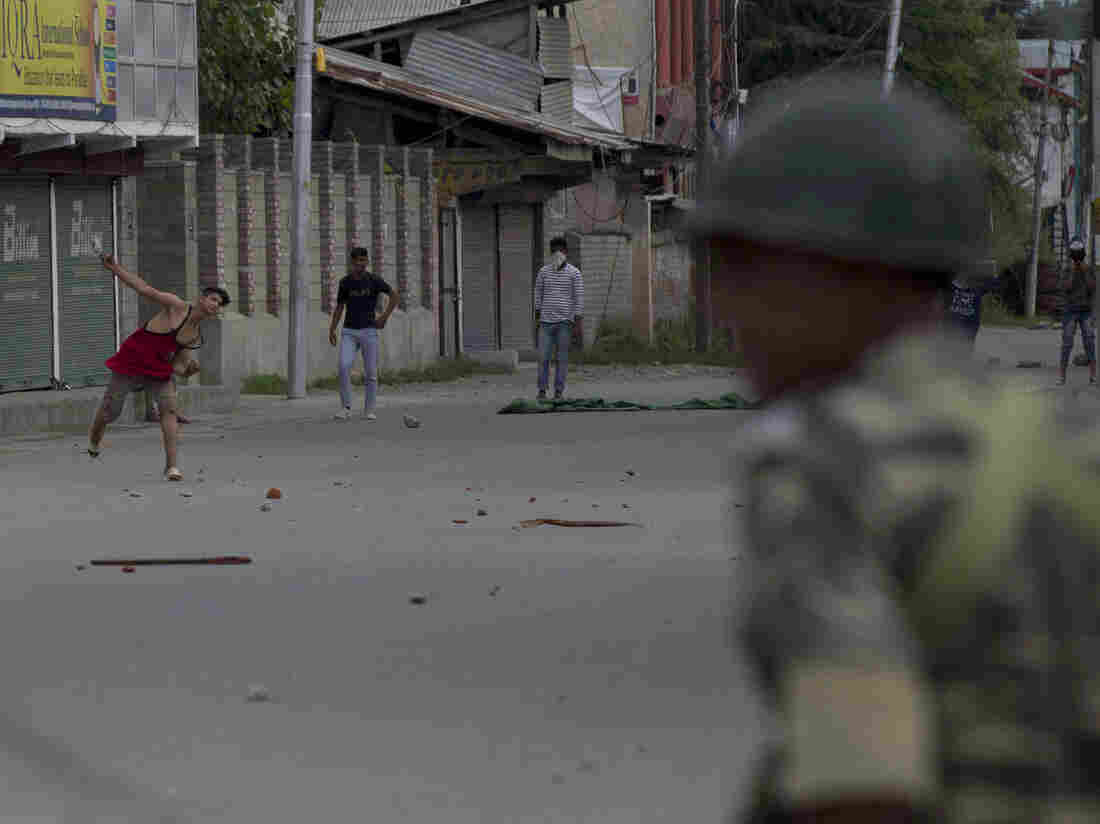 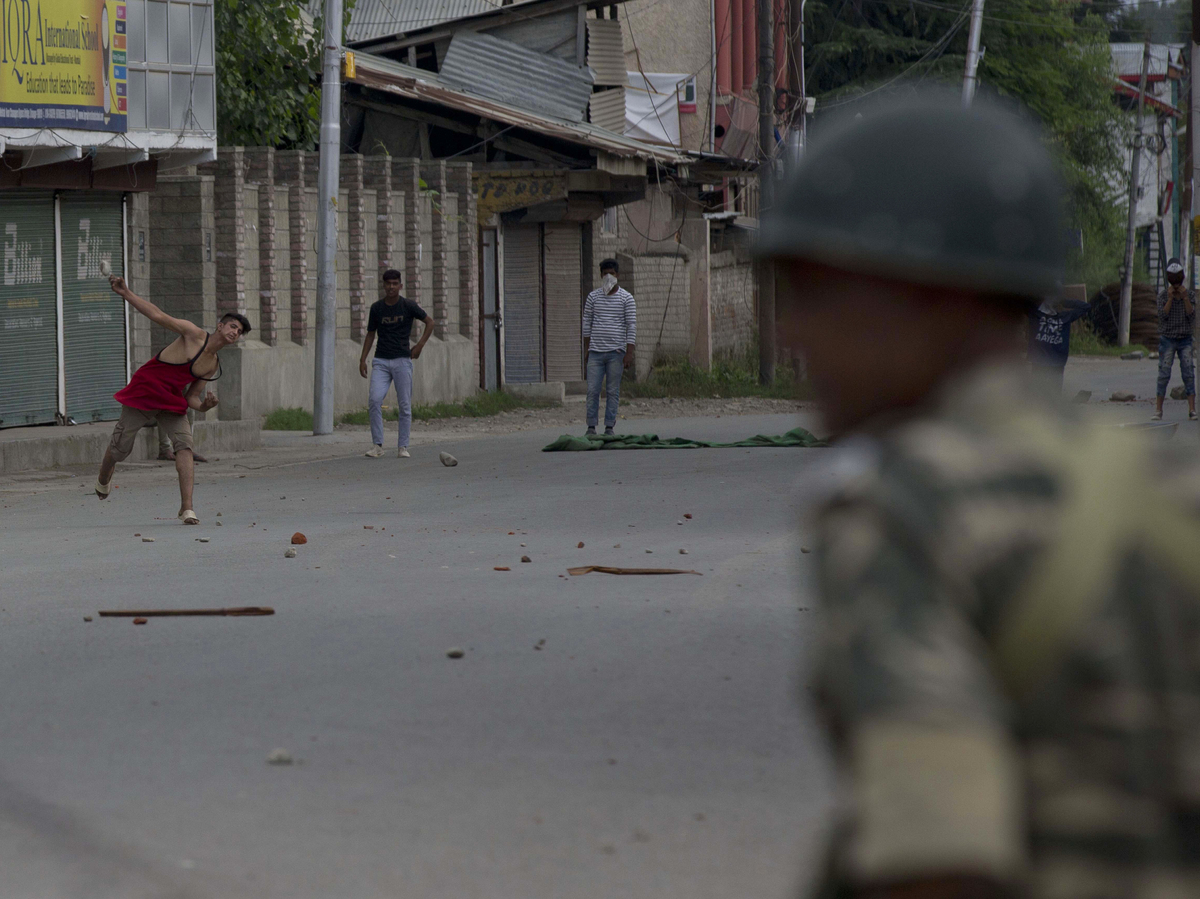 But many people who recently left Kashmir say normalcy isn't what they've observed.

"Roads were blocked. Tires were burned. They were protesting," says Naveed Bukhtyar, a 24-year-old law student who left Kashmir for New Delhi on Aug. 24. Paramilitary forces "were indiscriminately shelling people" with tear gas, he says.

Bukhtyar says despite curfew-like conditions, he saw massive protests take place around his law school dormitory in western Srinagar. On Aug. 8, he ferried his uncle to the city's airport — and saw more protests along that route. That same night, he drove to his hometown of Uri, a village near the Pakistani border that's known for being pro-Indian — and was astonished to find protests taking place even there.

"My friends, my relatives were in the protest. These are people who never protested for anything! They were chanting anti-India slogans," he says. "It was a shock for me. I'd never seen a protest there."

Uri usually draws big crowds to its Indian Independence Day parade every Aug. 15. This year, Bukhtyar says, no one showed up other than government employees, who were required to.

Human rights groups say it's likely that several thousand people have been detained for taking part in Kashmir's protests since Aug. 5. The Indian government has refused to give a tally. A senior police official, S.S. Sandhu, who works as an advisor to the Jammu and Kashmir governor, tells NPR the arrests were of "70 to 80 people — not more."

One of those arrested is a college student, a peace studies major named Ahmed. (NPR is not publishing his real name to protect his family's safety). He goes to school in New Delhi, but was home in Kashmir for summer vacation and broke the curfew to join a march in his village south of Srinagar on Aug. 9. Indian paramilitary forces surrounded him and his neighbors. 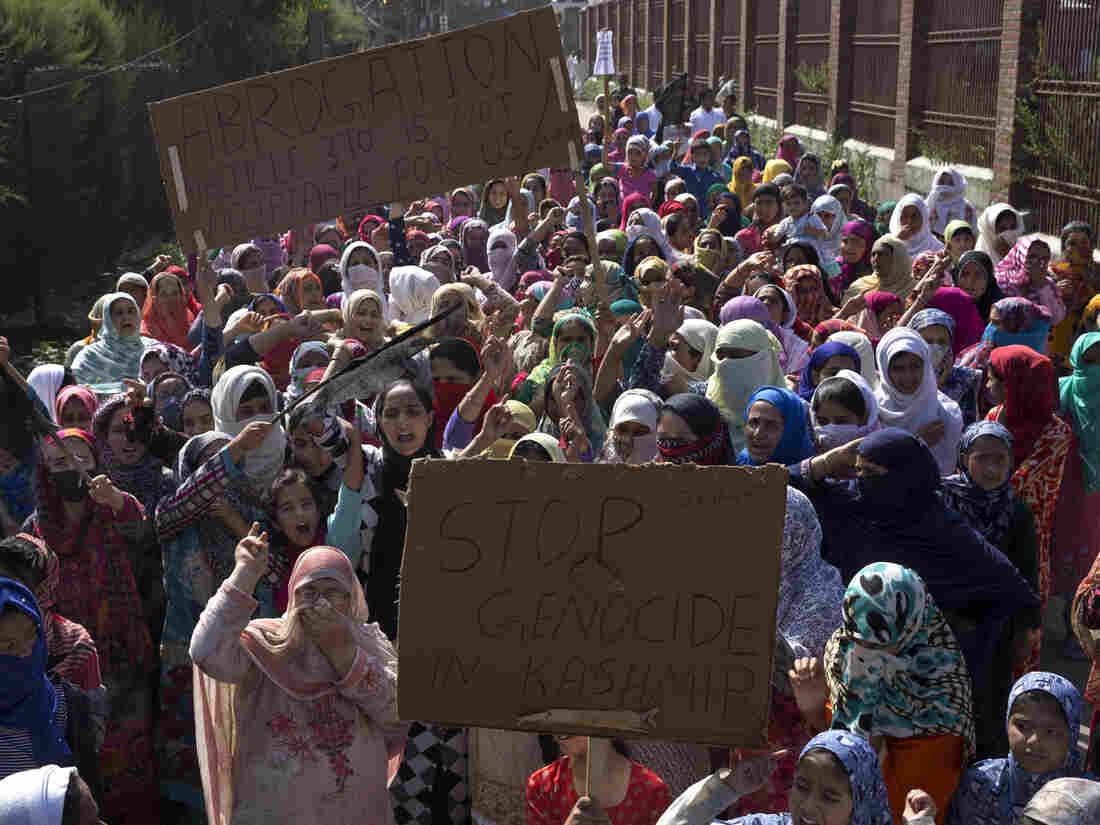 Kashmiri women hold placards and shout pro-freedom slogans during a protest after Friday prayers on the outskirts of Srinagar on Aug. 23. Dar Yasin/AP hide caption 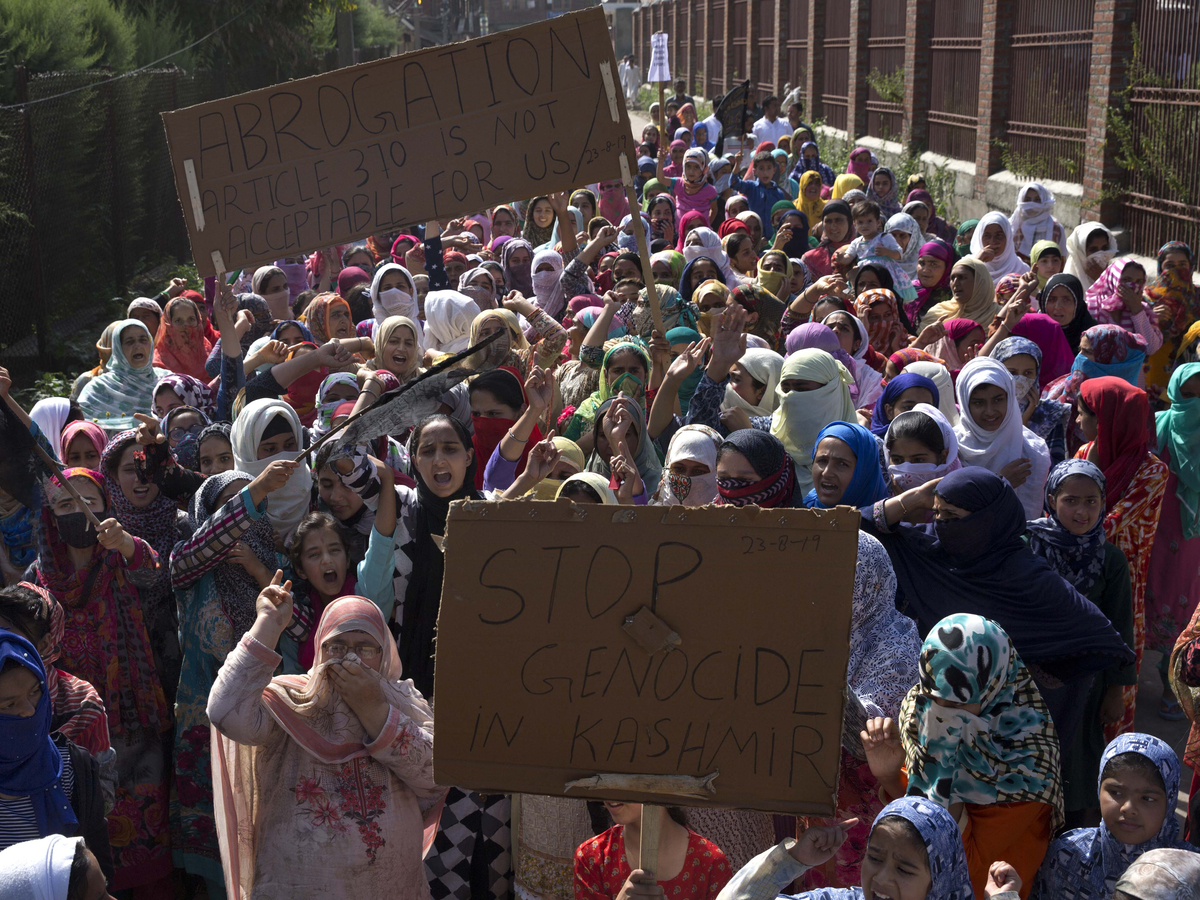 Kashmiri women hold placards and shout pro-freedom slogans during a protest after Friday prayers on the outskirts of Srinagar on Aug. 23.

"There was no stone-pelting. It was was a peaceful protest. Then suddenly, as we were marching, [paramilitary forces] started beating us with plastic rods. They didn't even say 'Go back.' They just started firing tear gas and pellet guns," Ahmed recalls. "It was such a horrible noise, I didn't know what they were firing at us."

Ahmed tried to run away, but troops grabbed him and several other protesters, shoved them into the back of a van and drove them to the tiny district jail. But it was already full, he says. So they were taken to an army base — where Ahmed says he saw prisoners as young as 7 years old. Some boys had bloodied faces.

"You could hear the screams of people being beaten there," he says. "The young boys, they were just like, 'We need guns! Either we [will] be killed, or we kill them.'"

"Everyone was fighting back — many of the young boys," he says. "But I didn't. I just gave up."

After three days, Ahmed's well-connected family managed to bribe a government official to free him. He traveled south by car to Jammu, where he boarded a train for the Indian capital. NPR met Ahmed in New Delhi, where he said he was getting physiotherapy for an injury to his back, from the butt of a gun. He had bandages on his left arm and two stitches in his hand.

Sandhu, the police official, tells NPR he can't verify Ahmed's account, and insists that such injuries have been extremely rare in the past three weeks, as are detentions of children. However, human rights activists who visited Kashmir from Aug. 9 to 13 said they heard accounts of children being jailed that are similar to Ahmed's.

"In south Kashmir, for instance, I think there was no village from which they had not detained scores of boys and young men en masse," activist Kavita Krishnan tells NPR. "So we met parents who had no way of knowing about their [children's] safety. The sheer fear was, 'If we say any word in protest against the government, then our child will be in danger.' "

Kashmiri politicians and media representatives have filed more than a dozen petitions to India's Supreme Court, challenging the abrogation of Article 370 and the government's communications blackout. The high court met Wednesday to consider Kashmir petitions, but delayed a fuller hearing until October.

"It is certainly a violation of every possible norm. It's completely illegal. There is no Indian or international law that will allow you to do what you're doing to Kashmiri people. Of course it's collective punishment," Krishnan says. "And yet, even the Supreme Court is sort of shrugging its shoulders and looking the other way."

Many Indians feel little sympathy for Kashmiris right now, because they've always thought of the region as a problem: It has a separatist movement that gets some support from Pakistani militants. A Kashmiri suicide bomber killed 40 Indian troops in February, bringing Pakistan and India to the brink of war.

Ahmed, the protester who was briefly jailed, says he didn't receive much sympathy when he got back to Delhi after his ordeal and went shopping at his local supermarket, his arm still in bandages.

"He was just trying to harass me, because it's like India versus Kashmir right now," Ahmed says. "I also feel it's like Hindu versus Muslim."

Such, he says, is the mood of the country.