Accessibility links
Review: 'The Turn Of Midnight,' By Minette Walters Minette Walters' sequel to The Last Hours finds her medieval villagers beginning to deal with the fact that they've survived the Black Death — and what that means for what's left of society.

'The Turn Of Midnight' Looks Toward Dawn

'The Turn Of Midnight' Looks Toward Dawn 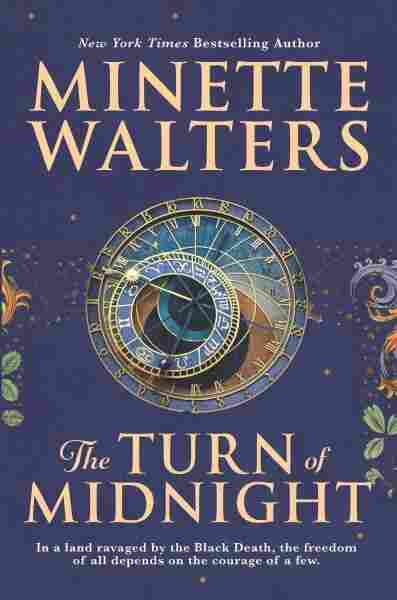 The Turn of Midnight

Minette Walters continues the medieval saga she began in 2017's The Last Hours with The Turn of Midnight, which finds the population of Develish in Dorseteshire (sic; medieval spellings and dialects pop up regularly in both books) dealing with the aftermath of the Black Death. How have they survived the plague when so many perished? The ministrations of their benevolent Lady Anne, a combination of Glinda the Good Witch and Jonas Salk.

Not only does Lady Anne believe in the humanity of all her charges, nobles and serfs alike; she's figured out that surrounding Develish with a moat will keep the dreaded disease away, at least for some time. While various members of her inner circle have notions about rats, fleas, and contagion, no one yet understands why some are saved while most perish.

If you're scratching your head — all the descriptions of lice and fleas and rats are contagious in their own way — wondering if this is the same Minette Walters who wrote some of your favorite spooky mystery novels like The Scold's Bridle and The Sculptress, rest assured it is. And yes, you should probably read The Last Hours before you pick up The Turn of Midnight, but if you don't, Walters opens this new novel with a fine summary of the first's events. Lady Anne and her giant, smart serf Thaddeus Thurkell have hatched a plan to keep Develish safe while ultimately making all of their region more equal for all.

A Complicated Puzzle Gets Closer To Solution In 'The Dark Above'

The action starts early and keeps going. Walters, a maestra of plot and pace, includes highway robbery, medieval abortifacients, and a locked room full of starving women and children on the road to the book's high-stakes denouément. If you want to read The Turn of Midnight simply as a medieval thriller, feel free.

However, Walters knows there's more. From the conversations between characters to the way she constructs scenes, pitting wrongheaded and status quo-loving dinosaurs against compassionate, reason-seeking types, it's clear that the author understands the connections between a dark time from the past and the dark times of our present age. If The Last Hours depicted what its inhabitants saw as the last days, The Turn of Midnight presents a fresh start. As Thurkell and his companions travel through different demesnes and villages, they learn that many places have been plague-free for six weeks or more, an excellent sign.

What happens when a society falls apart and then has to rebuild? There will be blood, pace Cormac McCarthy; even if noble serfs do their best, enemies surface. In this case, the most venal enemy is a priest named Jacques D'Amiens, whose identity cannot be erased due to a large facial port wine stain. French AND disfigured! Perhaps Walters goes a bit overboard there — but it's also a way to show how overtly manipulative clerics, whether Norman, English, or otherwise, used the fear of sickness and death to keep less-educated populations tied to their tithe boxes.

There's little question as to who might triumph in this quest drama. We're all rooting for the same team, and that's fine, especially because Walters has cannily left killer and victims right out in the open through the entire mystery.

There's little question as to who might triumph in this quest drama. We're all rooting for the same team, and that's fine, especially because Walters has cannily left killer and victims right out in the open through the entire mystery. The Turn of Midnight absolutely works as a mystery novel, one in which the villain is the Black Death.

Walters has always dealt in illness and disease, if you think about it and know her work. From domestic violence to sexual abuse to military PTSD and more, she seeks out the pain and traces it to its source. Her ability to look pure evil and cruelty in the face distinguishes her psychologically focused novels from some of her peers — and sometimes makes them very tough to read. If these two most recent books feel any easier, it's not because Walters has backed off from tough subjects, but because our distance from Develish's time and context protects us from its anguish.

And that, in the end, is a question Walters leaves for us to answer. Perhaps the story, her story, of Develish is finished. But ours is just beginning. Will our modern world end in last hours? Or we will, too, live to see a new day? Rarely does such a big question come after an immersion in centuries-old daily life. Time to pay heed.