Accessibility links
423 Submarine hobbyists are helping scientists in Montana do environmental research on the state's lakes. Researchers couldn't otherwise afford to rent subs, and it gives the hobbyists a sense of purpose. 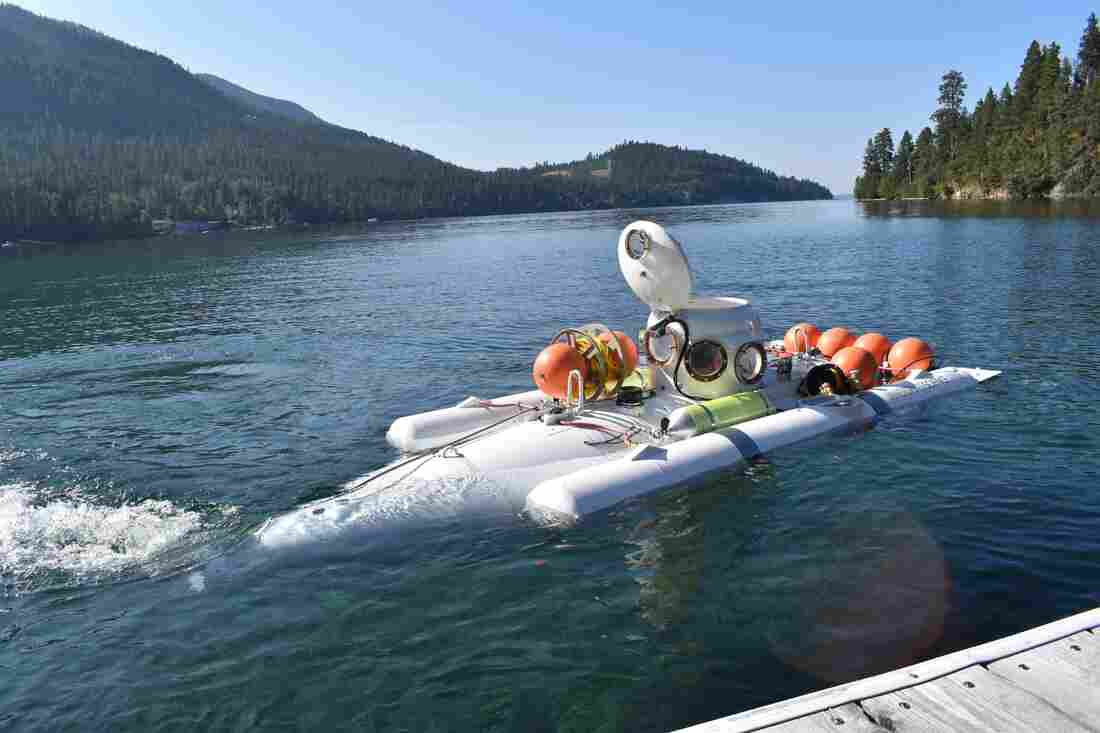 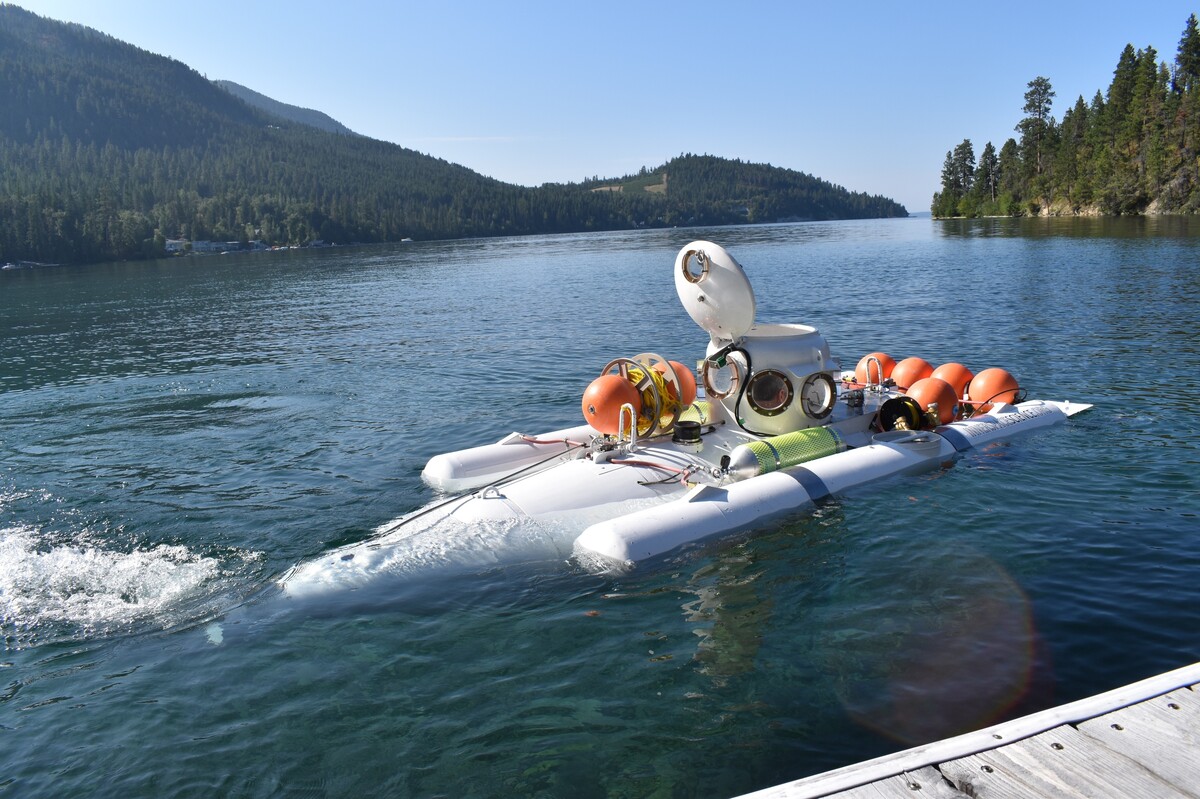 Something odd was bubbling beneath the surface of northwest Montana's Flathead Lake this summer. It wasn't lake monsters, but submarines. The subs' pilots were there to help cash-strapped researchers explore the depths of Flathead Lake for free.

It can be hard for research divers to see what's at the bottom of deep bodies of water like Flathead Lake without special equipment and experience. So, having a couple of submarines around this summer was helpful to the University of Montana's Flathead Lake Biological Research Station.

The sub pilots also allowed the public to go for a quick spin under the surface. Before leaving the dock, David Colombo, one of a handful of submarine hobbyists who came to Flathead Lake, checked riders' weights and went over a few questions.

"You're not claustrophobic, are you?" he asked.

Colombo also offered some words of encouragement as riders left the dock.

"Hank, we have a screamer!" Colombo yelled with a smile.

Riders met British Columbia resident Hank Pronk, who was standing on his two-man submarine bobbing on the lake's crystal-clear surface. 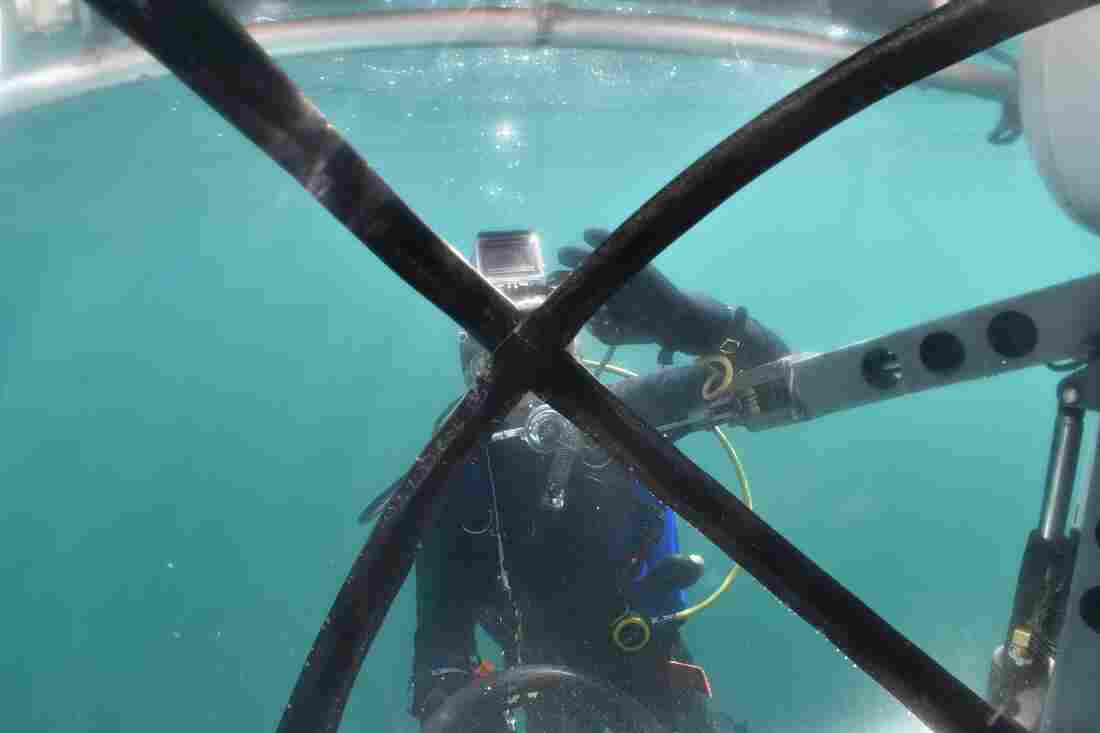 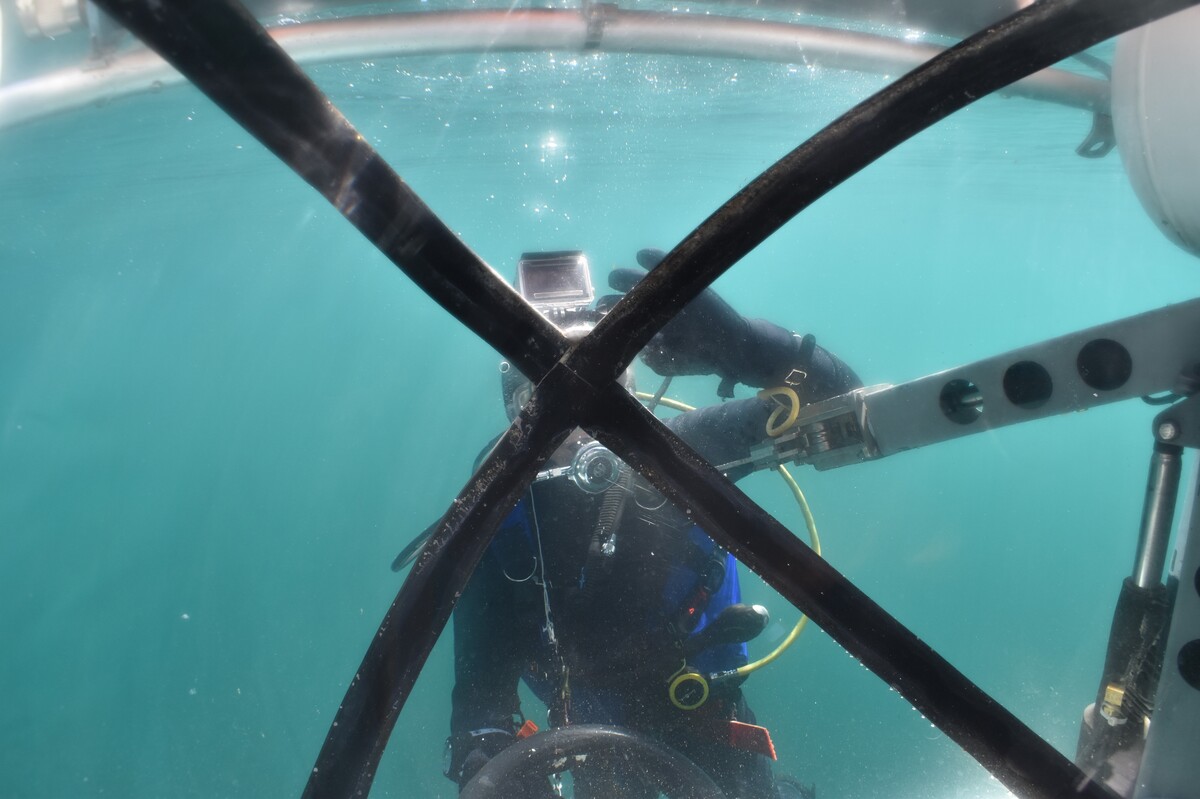 A safety diver turns on a Go-Pro camera on the Nekton Gamma.

Pronk and his fellow enthusiasts build their subs mostly by hand. Pronk's sub, named the Nekton Gamma, is smaller than a compact car; climbing in is a squeeze.

"Want me to go down?" Pronk asked two safety scuba divers before closing the hatch. "Alright, we're going to dive."

Pronk's sub will help Biological Research Station scientists explore below 100 feet, which is the maximum depth the station's research divers can go. Flathead Lake is 380 feet at its deepest point, which puts many locations on the lake's floor physically out of reach.

"So, we're 14 feet from the bottom," Pronk said as he navigated, engines whirring.

This is just a fraction of what Pronk's sub is capable of. It's rated for 1,000 feet.

That's plenty for Bio Station research scientist Jim Craft. He said the station has conducted limited deep-water research because it's so expensive.

He added that the Bio Station doesn't do enough research in deep water to justify buying either a rover or submarine.

But the sediment and algae samples collected during the week-long expedition this summer might give the station enough information to justify more deep-water research. Video will also help researchers examine invasive Mysis shrimp, which are major players in Flathead Lake's food web.

"So, understanding their habits and what they're doing is really nice," Craft said. 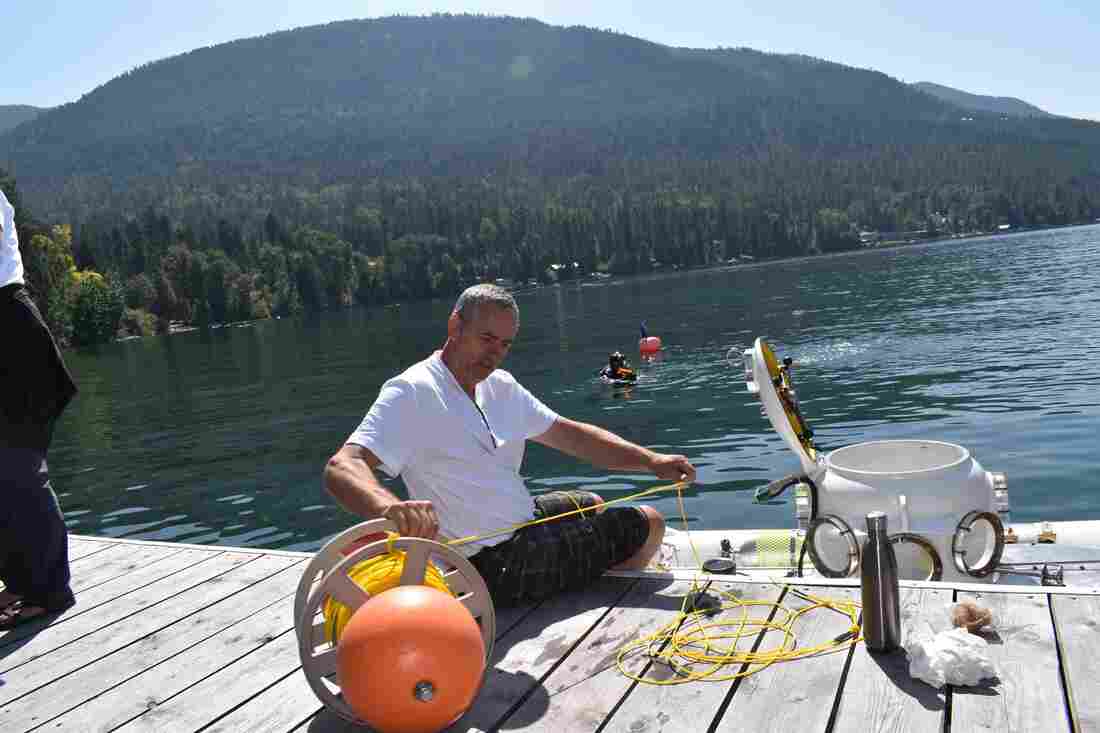 Pilot of the Nekton Gamma, Hank Pronk, gets his safety buoy ready before he leaves the dock for a dive in Flathead Lake in northwestern Montana. Aaron Bolton/Montana Public Radio hide caption 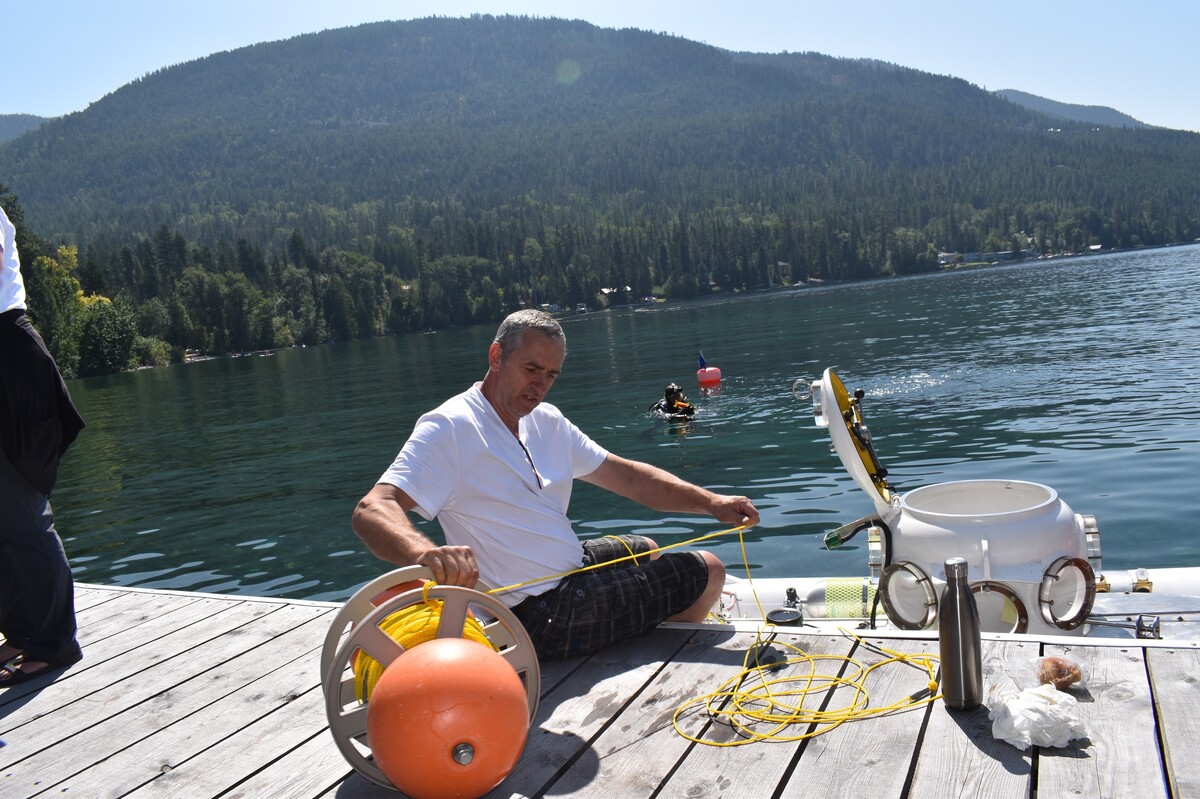 Pilot of the Nekton Gamma, Hank Pronk, gets his safety buoy ready before he leaves the dock for a dive in Flathead Lake in northwestern Montana.

This scientific reconnaissance wouldn't have been financially feasible for the Bio Station without Pronk and his fellow submarine hobbyists. They're members of Innerspace Science, a collective that connects researchers with private submarine owners.

"We started it two years ago," the site's founder, Alec Smyth, said. "And it seems to be working out."

It's much more rewarding to use your sub that way then to just putter around and just come home with a family video or something.

The group's seven members solicit expedition ideas from researchers through their website. Because they're not commercial operators, no money changes hands. They're in it just for the experience.

"It's much more rewarding to use your sub that way then to just putter around and just come home with a family video or something," Smyth said.

The Flathead Lake expedition is the second trip Innerspace Science members have taken. Smyth hopes the resulting research will bring in more expedition requests in Europe and the U.S.

Back on the bottom of Flathead Lake, sub owner Hank Pronk and fellow Innerspace Science member David Colombo have found some of those invasive Mysis shrimp beginning their daily migration to feed on the surface. In the video of that night dive, thousands of white specs swim just outside of the glass dome on Pronk's sub.

"They're so tiny," Colombo said.

The Mysis population has fueled an explosion of invasive lake trout since the 1980s, significantly reducing numbers of native trout species.

The resulting data from the partnership between the hobbyist sub owners and researchers could help lake managers understand what's happening with trout populations and how they might restore the ecosystem.