Accessibility links
Coast Guard Suspends Search For Boat Fire Survivors Twenty bodies have been recovered, while five crew members made it to safety. Authorities say they believe the rest of the 39 people aboard the Conception have died since the boat caught fire Monday. 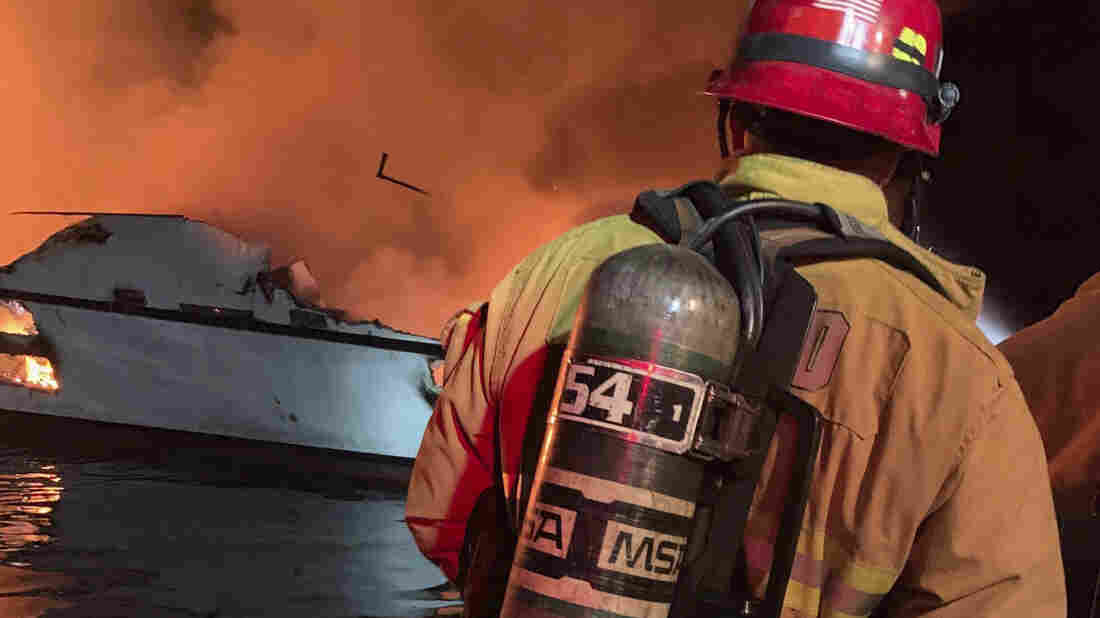 Firefighters respond to a boat fire off the coast of Southern California on Monday. The U.S. Coast Guard said it launched several boats to help more than two dozen people "in distress." Ventura County Fire Department via AP hide caption 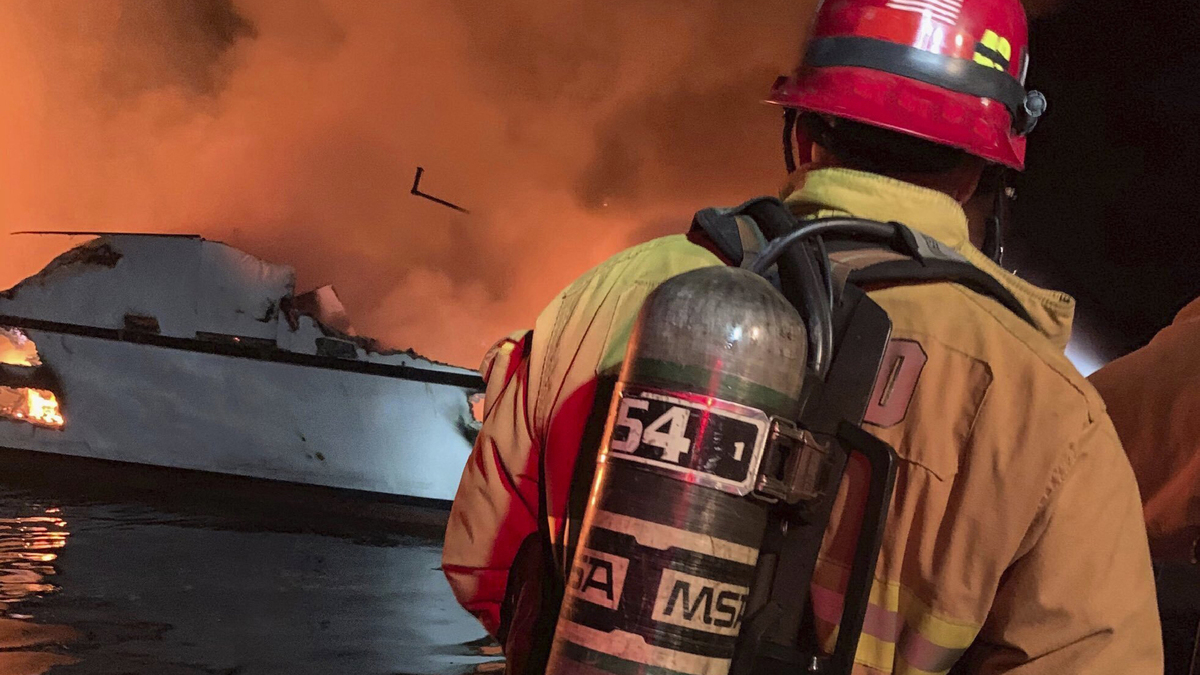 Firefighters respond to a boat fire off the coast of Southern California on Monday. The U.S. Coast Guard said it launched several boats to help more than two dozen people "in distress."

One day after a dive boat erupted in flames, killing at least 34 people, authorities are suspending their search efforts for survivors. At a news conference Tuesday, Santa Barbara County Sheriff Bill Brown said the bodies of 20 victims — 11 female and 9 male — have been recovered from the wreckage, while divers are still trying to recover the remains of several other victims they have spotted in the waters near California's Channel Islands.

The vessel identified as Conception had a total of 39 people on board, comprising 33 passengers and six crew members. Officials say just five people — all crew members — managed to escape to safety, and U.S. Coast Guard Capt. Monica Rochester told reporters that search and rescue teams have observed "no additional signs of distress or debris."

"It is never an easy decision to suspend search efforts," Rochester said Tuesday, later adding: "We have made the determination, based on current information, that as far as deliberate search-and-rescue efforts [go], they have ceased. That means the Coast Guard will not necessarily be tasking any of our our boats or helicopters to continue to be looking for victims."

Asked if she believed that those who remained missing did not make it, she answered: "That would be a correct assumption."

The Conception, based out of Santa Barbara Harbor, was on a three-day dive trip to the Channel Islands, just off the coast of mainland Southern California. The boat departed Santa Barbara early Saturday and was supposed to return on Monday morning — but officials say the 75-foot commercial diving vessel went up in flames sometime around 3:30 a.m. local time Monday.

Rochester told a news conference that same day that that the company operating the boat, a dive trip purveyor known as Truth Aquatics, has been in full compliance with regulatory standards.

Rochester said she cannot offer further information about the causes of the fire or how it unfolded. Brown stated on Monday that the initial emergency call did not refer to an explosion. Nearby civilian boats first reached the scene to help rescue people only after hearing mayday calls.

It was a good Samaritan pleasure craft called Grape Escape that helped evacuate the five crew members. (Editor's note: The Coast Guard initially identified the boat that rescued crew members of the Conception as the Great Escape.)

Earlier in the day, Rochester said surviving crew members were "already awake and on the bridge, and they jumped off" at the time of the fire. The rest of the passengers are believed to have been below deck when the flames broke out.

Family members and friends of the victims began arriving at Coast Guard Station Channel Islands Harbor hours after the blaze had destroyed the commercial boat.

One of the first to arrive was James Coles, who says his 58-year-old brother, a longtime surfer, had worked as a cook on the boat for about a year. 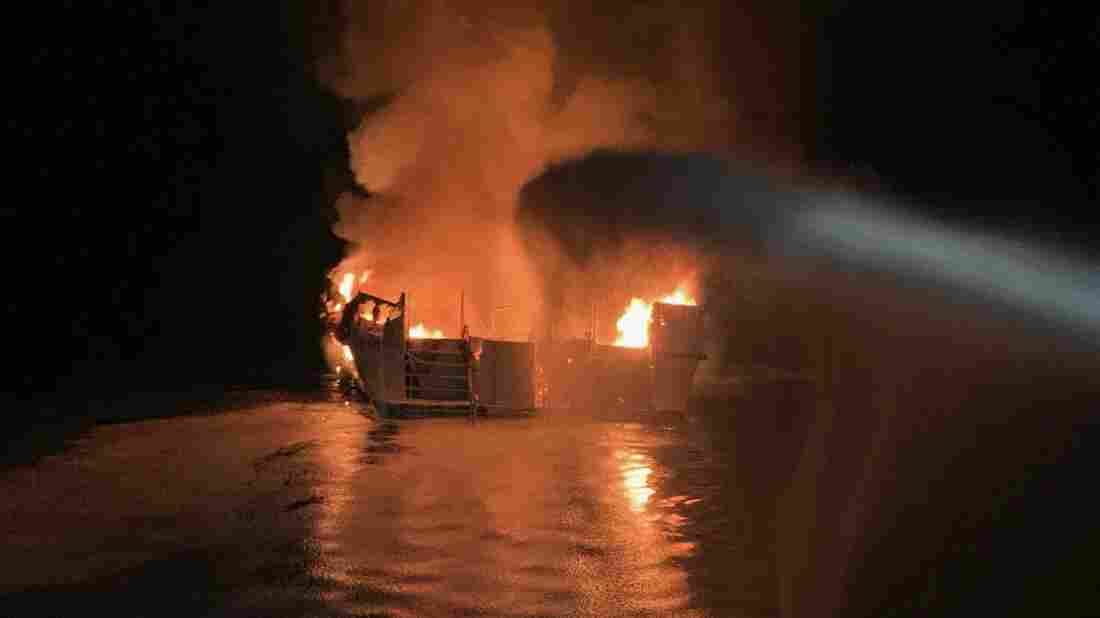 The vessel was identified as the Conception, based out of Santa Barbara Harbor, and was on a three-day dive trip to the Channel Islands. Ventura County Fire Department via AP hide caption 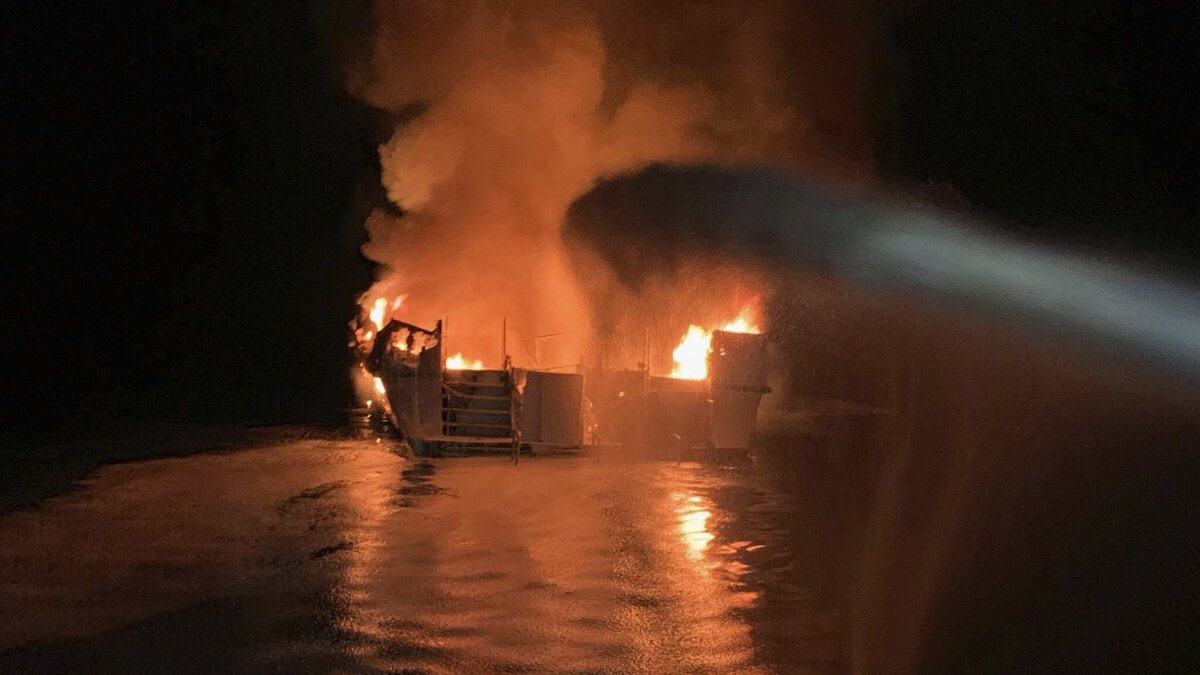 The vessel was identified as the Conception, based out of Santa Barbara Harbor, and was on a three-day dive trip to the Channel Islands.

"I haven't been able to get ahold of his cellphone or nothing, you know," Coles said. "I'm very concerned and I hope the best for everybody on there."

The Conception eventually sank approximately 20 yards off the shore in 64 feet of water, according to a Coast Guard statement.

#CoastInc: @VCFD responded to boat fire off the north side of Santa Cruz Island at approximately 3:28am. @USCG helping support rescue operations for people aboard a dive boat. #ChannelIslands @USCGLosAngeles @CountyVentura @SBCOUNTYFIRE pic.twitter.com/DwoPGfBjtA

The position of the boat underwater — and the fact that it is upside down and affected by the tides — means that recovering any bodies inside it will be a complicated operation for rescue divers.

"At some point they're going to have to make a determination of when the best time is to actually either refloat that vessel and attempt to recover anyone who may be inside, or to try to make the recovery while it's still on the ocean floor," Brown said.

In an interview with Los Angeles TV station KTLA, Coast Guard Petty Officer Mark Barney said two of the crew members had suffered minor leg injuries. He said that rescue agencies were searching for dozens of passengers from the ship as well as a missing crew member, using both aircraft and surface ships, but that the effort was hampered by dense early morning fog.

"One big question here going forward will be, what exactly was going on on the ship if the crew was able to get off. ... What were the circumstances around that?" NPR's Kirk Siegler reported. "Could they not get under to start rescuing people, was it just too hot? We just don't know at this time."

The sheriff stated that there is an investigation underway to determine if there was any criminal activity involved — though he said "we have no reason to suspect that there was at this point."

Santa Cruz Island is about 18 miles from the mainland and about 60 miles west of Los Angeles. The island, home to a national park, is known for its rugged hiking trails and picturesque shoreline.