Accessibility links
The World Of Ella Fitzgerald: A Turning The Tables Playlist Listen to a selection of marvelous music from the First Lady of Song, plus music by artists who have felt her influence.

The World Of Ella Fitzgerald: A Turning The Tables Playlist

The World Of Ella Fitzgerald: A Turning The Tables Playlist 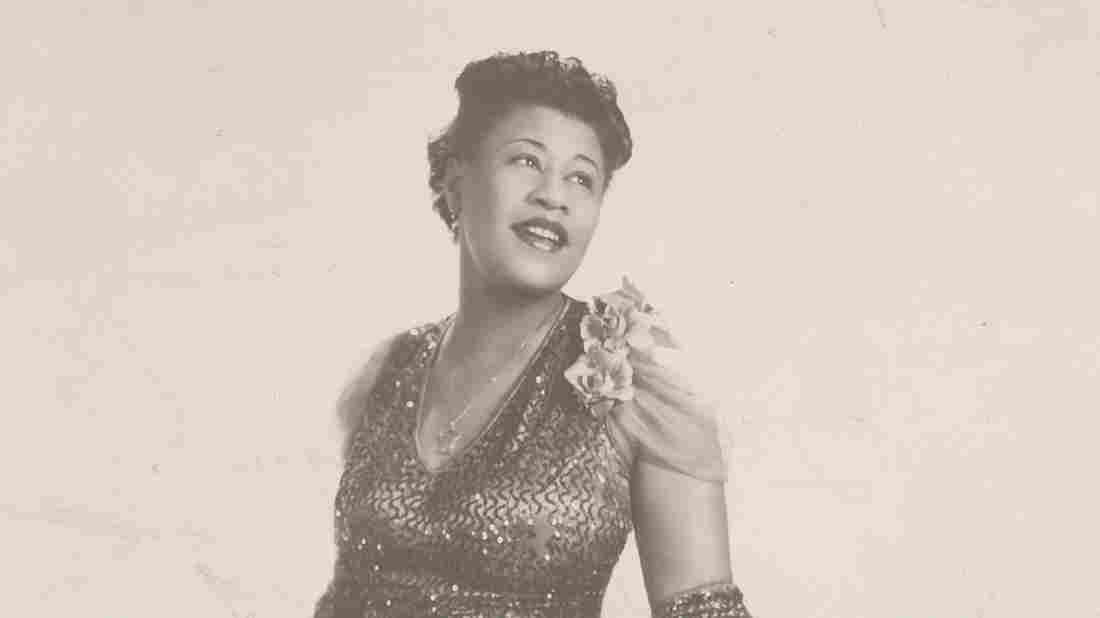 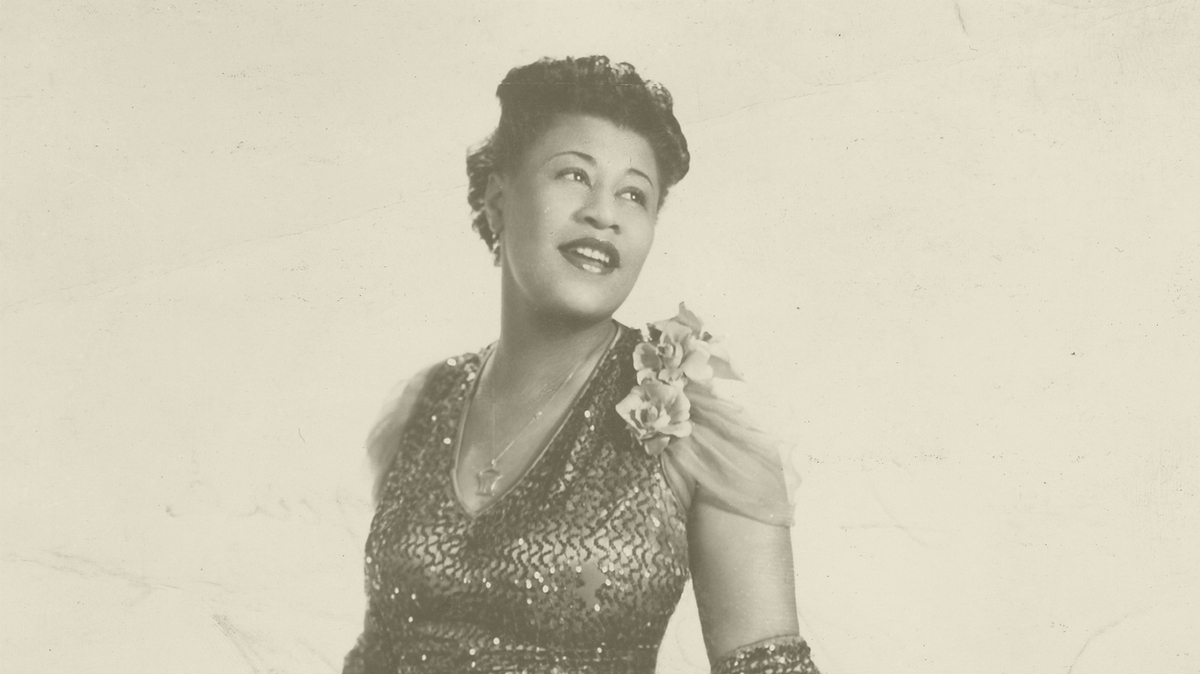 That Ella Fitzgerald — Ella! — would pull back the stage curtain ever so discreetly before her concerts, eyeball the audience and say to her band, "I hope they like me," is one of the more exasperating mysteries of life. And yet, there she was — the First Lady of Song — year after year, peeping and fretting. But Fitzgerald's performance anxiety is likely the reason why millions of people bought her records and clamored to hear her in person: She channeled the jitters into a kind of musical perfectionism that sounded so much better than good. Her swinging, her scatting! To paraphrase the songwriter Johnny Mercer, she was just too marvelous, too marvelous for words.

This playlist features some of Fitzgerald's performances that were particularly fine. It's by no means definitive. She recorded hundreds of songs on albums and '78s. The playlist also includes recordings by other artists — some younger, some not. Foremost are the Boswell Sisters, a New Orleans-based trio led by Connee Boswell — the only singer who Fitzgerald consistently credited as a primary influence. In 1934, Fitzgerald reportedly conjured Connee during her prize-winning, life-changing performance at the Apollo Theater's amateur talent contest in Harlem. The Boswells were internationally known radio stars back then and the progenitors of girl groups in American popular music.

Neither Connee nor her sisters scatted, but it's easy to extrapolate from their vocal calisthenics that one day some woman would. Listen to their version of "It Don't Mean a Thing" and pay close attention from 1:12 to 1:46. Then check out Fitzgerald's and Duke Ellington's live performance of "Cotton Tail" on The Stockholm Concert album. All five minutes are delicious and they're a seemingly natural evolution from the Boswells.

The Great American Song Book series vaulted Fitzgerald to superstardom during her lifetime and later comprised a box set of 16 CDs. Her vocal performance on Irving Berlin's "Blue Skies" is a tour de force with the Paul Weston Orchestra — a swinging scat that dominates the nearly four-minute song. Serious students of jazz vocals study it still. Then, there are the ballads, without which love would sound a lot less special for millions of people around the world. Ellington's "I Didn't Know About You," Rodgers and Hart's "Isn't It Romantic" and Jerome Kern's "Can't Help Lovin' Dat Man" are magnetic, as are Fitzgerald's studio recordings of "I've Got a Crush on You" and "But Not for Me" by George and Ira Gershwin. She even makes Cole Porter's mid-tempo delights more delightful. "Don't Fence Me In" is not to be missed.

But — with rare exception — recordings of Fitzgerald's live performances sound even more wonderful. There's nothing like a prodigiously talented vocalist who's eager to win over an audience. She seems to relax on stage and embrace the unexpected with humor and grace. In 1958, she gave the Italians something close to coloratura in Rome with "I Can't Give You Anything But Love." Over three and a half minutes, she's adorably funny, singing I can't give you anything but cece and — as she often did — mimicking her musical hero Louis Armstrong. At the same concert, Fitzgerald gives "I Loves You Porgy" real pathos — an entirely different emotional color that's not often associated with her studio recordings.

Ever hear "Imagine My Frustration" from that evening with Ellington in Stockholm? Please do. It's almost as fresh as Fitzgerald's "Mack the Knife" in Berlin, one of the biggest hits of her career.

No singer has ever mastered all of this woman's tool box of sound. But as the Grammy Award-winning jazz lover Rickie Lee Jones says, "She's part of how everybody sings." Some who came close to her relaxed humor and genius timing include the modern jazz trio Lambert, Hendricks and Ross — and later, Annie Ross conjures her as a solo artist. Dianne Reeves and the Jazz at Lincoln Center Orchestra do a mighty fine "Bli-Blip," almost catching up to Ella and Duke. Meanwhile, Diane Schuur and the Count Basie Orchestra beautifully Ella-gize "I Loves You Porgy." But no one has ever mastered Fitzgerald's "Don't Be That Way," which could settle any argument in any language on any continent.

Songs by the jazz duo Tuck & Patti recall Fitzgerald's intimate recordings with guitarist Joe Pass. Roberta Flack's "Tenderly" also evokes the master. Even Al Jarreau's early music gives her a nod, as his vocalese on "Take Five" suggests. On at least two occasions, Fitzgerald released "Dream a Little Dream of Me" — a signature hit for Mama Cass Elliott. But there's a trace of Fitzgerald from the get go in The Mamas & The Papas' original recording.

It's a pity that there's no album featuring Fitzgerald's performances on the 1967 television special Frank Sinatra: A Man and His Music + Ella + Jobim (though it is available to stream on Amazon Prime. Start watching at 34:00 and don't stop!) Sinatra is positively giddy whenever she opens her mouth, and the former big band singers are in rare form with the audience as Nelson Riddle conducts the orchestra. When Ella sings, Frank is so elated he literally leaps into the air.

That Sinatra and Fitzgerald never cut an album together is a crime. That Fitzgerald and Louis Armstrong recorded a bushel of songs is a sign of the divine. No live audience, but their chemistry crackles. Fitzgerald reportedly insisted that Armstrong choose all the songs and sang in his key — that's how much she wanted to be in the studio with him. "Stompin' at the Savoy," "These Foolish Things (Remind Me Of You)," "Isn't This a Lovely Day?" and, later, the Porgy and Bess repertoire are triumphs. Fitzgerald was a true musician's musician — her relative pitch (the ability to hear any note and immediately identify corresponding notes) as well as her natural inclination toward perfection were heavenly assets to the most beloved jazz musician on the planet.

Armstrong's last homemade reel-to-reel tape — number 1987.3.590 — is telling. Ricky Riccardi, who curates the collection for the Armstrong House Museum in Queens, N.Y., found the 1971 tape many years later and describes it on his blog.

"The last song Louis Armstrong listened to on the very last tape he made on July 5, 1971 was 'April in Paris,'" Riccardi writes. It's the recording he made with Fitzgerald, which appeared on their album Ella and Louis. Armstrong listened before he went to bed and died near dawn the following day. Like so many before him and so many after, he'd reached for Fitzgerald when it mattered.