Accessibility links
2019 Booker Prize Shortlist Features Finalists Margaret Atwood, Salman Rushdie Atwood made the list for her sequel to The Handmaid's Tale, and Rushdie for his reimagining of Don Quixote. Chigozie Obioma, Elif Shafak, Lucy Ellmann and Bernardine Evaristo round out the finalists. 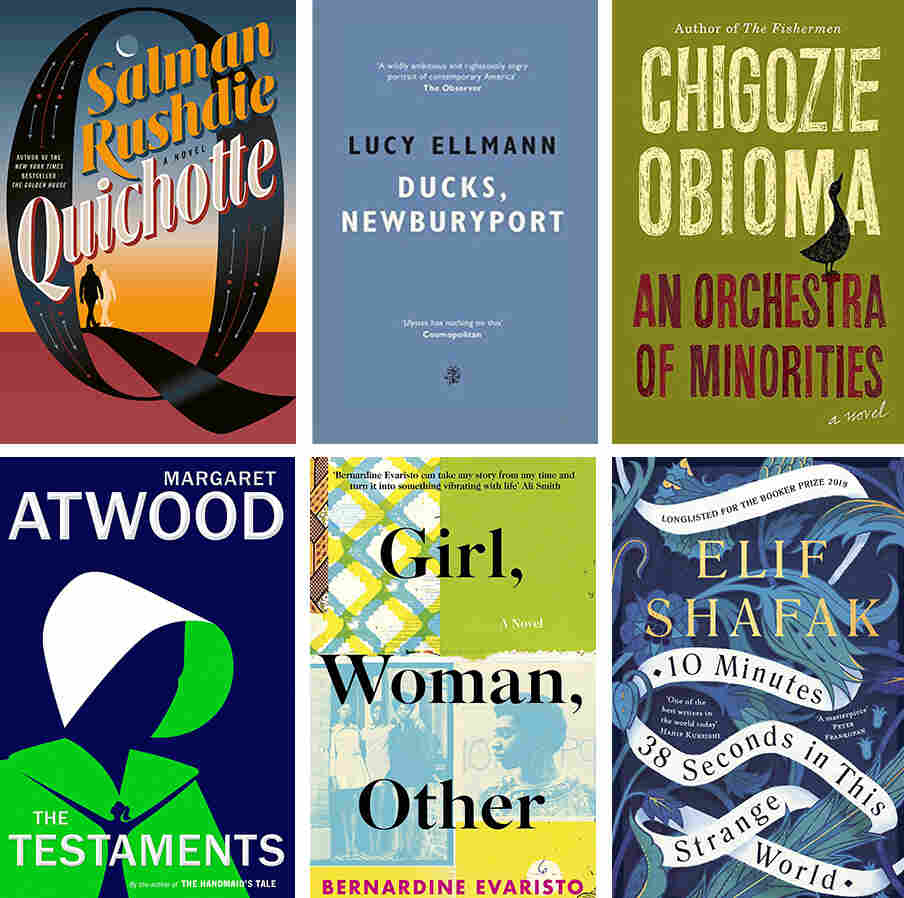 Clockwise from top left: Quichotte by Salman Rushdie; Ducks, Newburyport by Lucy Ellmann; An Orchestra of Minorities by Chigozie Obioma; 10 Minutes 38 Seconds in This Strange World by Elif Shafak; Girl, Woman, Other by Bernardine Evaristo; and The Testaments by Margaret Atwood. Courtesy of the publishers hide caption

toggle caption
Courtesy of the publishers 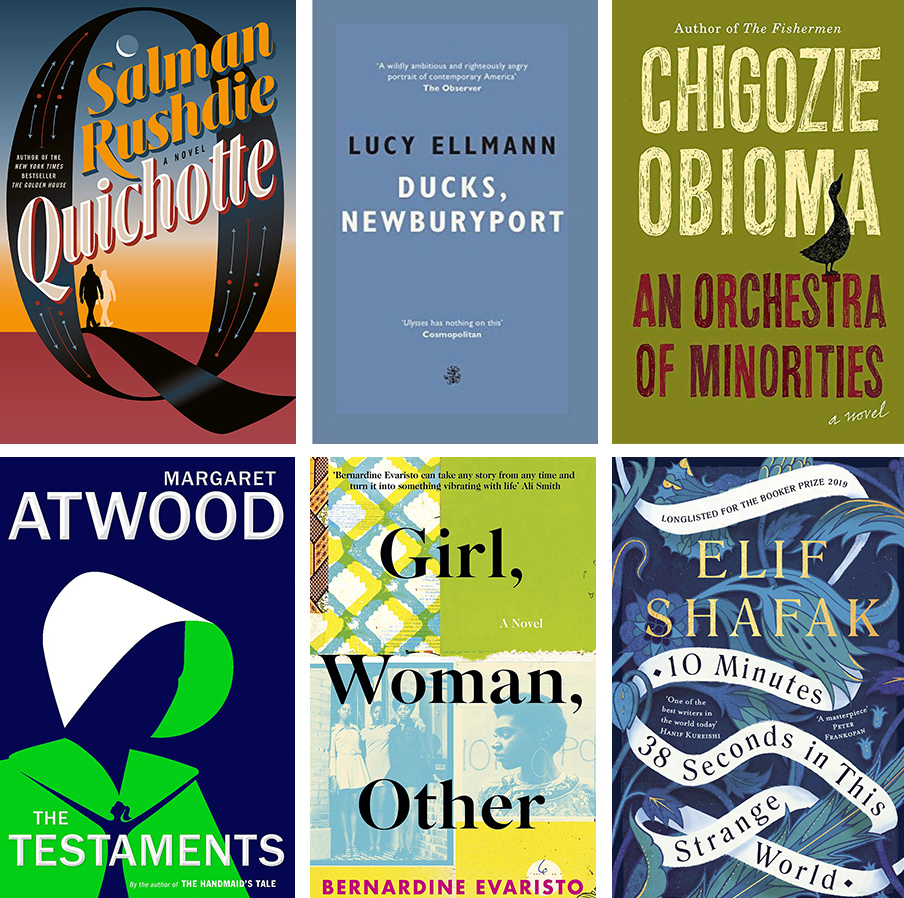 Clockwise from top left: Quichotte by Salman Rushdie; Ducks, Newburyport by Lucy Ellmann; An Orchestra of Minorities by Chigozie Obioma; 10 Minutes 38 Seconds in This Strange World by Elif Shafak; Girl, Woman, Other by Bernardine Evaristo; and The Testaments by Margaret Atwood.

Courtesy of the publishers

Booker Prize judges have whittled down the books still in consideration for the prestigious literary award from 151 submissions to six finalists. On the shortlist released Tuesday are two former winners and another who came awfully close: Margaret Atwood and Salman Rushdie, who won in 2000 and 1981, respectively, as well as 2015 finalist Chigozie Obioma.

This trio of marquee names is joined by Elif Shafak, one of Turkey's best-known living writers; Illinois-born Lucy Ellmann, who now lives in Scotland; and London-based Bernardine Evaristo.

"There is an abundance of humour, of political and cultural engagement, of stylistic daring and astonishing beauty of language. Like all great literature, these books teem with life, with a profound and celebratory humanity," Peter Florence, chairman of the 2019 judging panel, said in a written statement released Tuesday.

"Anyone who reads all six of these books would be enriched and delighted, would be awe-struck by the power of story, and encouraged by what literature can do to set our imaginations free," he added.

One title on the shortlist may jump out immediately to readers: Atwood's The Testaments, the highly anticipated follow-up to her perennial bestseller and syllabus staple, The Handmaid's Tale. That novel earned a spot on the Booker 1986 shortlist after its release, and its recent television streaming adaptation has become a prize favorite in its own right.

Florence said Atwood's previous work sets the bar "unusually high for her" — but even so, with the dystopian sequel, "she soars."

"There is a strange pleasure in knowing the secret of the publishing juggernaut that is The Testaments, and an exquisite agony in being unable to share it yet," he said. "So this: it's a savage and beautiful novel that speaks to us today with conviction and power." The novel will be published Sept. 10.

'The Testaments' Takes Us Back To Gilead For A Fast-Paced, Female-Centered Adventure

Leaving The Past Behind — Or Trying To — In Rushdie's 'Golden House'

Rushdie's Quichotte, like Atwood's latest book, represents something of a return to familiar characters — though unlike The Testaments, Quichotte reimagines a story by another author that dates back about four centuries, Miguel de Cervantes' Don Quixote.

And that took gumption, according to Florence.

"If you are going to tilt at one of the greatest works of European literature, the novel often cited as the world's greatest, then you'd better make sure you can play at Cervantes' level," he said. "You'd better push the boundaries of fiction and satire, re-imagine romance and fantasy, and you'd better have something to say about the contemporary world and all its delusions and heroisms. You'd better bring maximalist entertainment."

As for Obioma, born in Nigeria, now based in the U.S., An Orchestra of Minorities represents both his sophomore effort and his second time as a Booker finalist. He told NPR's Scott Simon earlier this year that his newer novel, a love story steeped in Igbo folklore, was his attempt at "something cosmological" and a challenging one at that.

"It was very difficult, it entailed a lot of research, even down to actually going to shrines and interviewing the last adherents of Odinani, the Igbo religion, now that most Africans are converts to either Christianity or Islam," Obioma said, adding that his novel remains necessarily "very Western."

"But I wanted to explore, can one write a novel that is not within the Western tradition? Can one write a novel where the character is, probably half the time, able to have agency, while half the time, principalities and metaphysical forces are dueling to negotiate the character's life? So in some way, it's probably an uncharted territory, I'll say."

Now, if Ellmann were to win, the Booker would be in uncharted territory as well. At nearly 1,000 pages, her Ducks, Newbury Port would be the longest novel in the prize's 50-year history; only 2013's 832-page winner The Luminaries comes close.

Still, judge Joanna MacGregor said that while Ellmann's novel is "challengingly epic," her story of an Ohio housewife nevertheless flows "with dazzling lightness and speed."

"Lucy Ellmann has written a genre-defying novel, a torrent on modern life, as well as a hymn to loss and grief. Her creativity and sheer obduracy make demands on the reader," MacGregor said. "But Ellmann's daring is exhilarating — as are the wit, humanity and survival of her unforgettable narrator."

Meanwhile, Shafak's 10 Minutes 38 Seconds In This Strange World is the first entry in her prolific output — nearly a dozen novels written in Turkish and English already at age 47 — to draw the attention of Booker judges. Girl, Woman, Other also got the first such nod for Evaristo, a London-born writer of Nigerian ancestry.