'The Grammarians' Diagrams The Push And Pull Of Sisterhood

'The Grammarians' Diagrams The Push And Pull Of Sisterhood 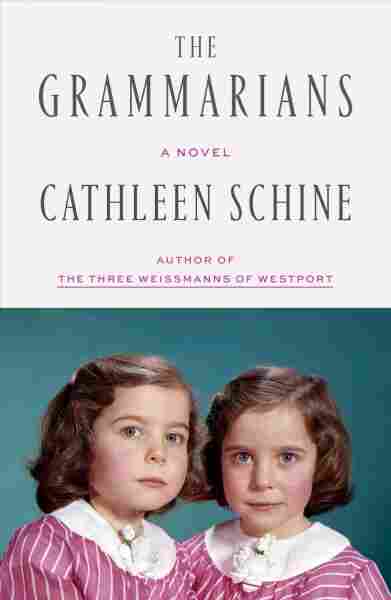 Novelist Cathleen Schine has the gift of wearing her intellectuality lightly. Since 1983, she has launched one sharply comic novel after another — about mutating female friendships, academic pomposity, foolish old men who trade in their old wives for spiffier models, and grown children who fret over their aging parents. Schine enriches each of these modern scenarios with literary prototypes that include Gustave Flaubert, Jane Austen, Charles Darwin and Denis Diderot. The wonder is that none of these references weighs them down.

The Grammarians, Schine's 11th novel, is about two language-obsessed sisters — identical twins whose bible is Webster's New International Dictionary, Second Edition, which their adoring father, a philosophically inclined accountant who loathes numbers, buys for them when they are small.

Growing up in Larchmont, N.Y., the freakishly precocious redheads, Daphne and Laurel Wolfe, share a private language, a passion for abstruse words (like "oxters," meaning armpits) and a fascination with the nitty-gritty of English usage. Their intensity intimidates their mother, who encourages them to watch television, because "What kind of child befriends a dictionary and tries to take it to bed with her so it will have someone to talk to?" she asks. On rainy days, she entertains them with the soundtrack of My Fair Lady, which her "two little Professor Higginses" adopt as their family songbook. "Words, words, words, words!" they chant, along with "Why can't the English teach their children how to speak?"

'They May Not Mean To' Is A Wry, Warm Look At The Indignities Of Aging

In relaying Daphne's and Laurel's life stories, The Grammarians diagrams the sentence that is twinhood. The girls branch out from identical outfits and inseparability to a mischievous switcheroo (à la Shakespeare) in which they swap jobs for a day, with lasting consequences. Competitiveness spreads like a toxic mold over their relationship. "You're a better me than I am," Laurel tells her sister after their job switch, before adding silently, "But I'm a better you than you are."

As both Wolfe twins find their calling writing about English grammar, the parallels with Esther Pauline "Eppie" Lederer and her twin sister, Pauline Esther "PoPo" Phillips — better known as the advice columnists Ann Landers and Abigail Van Buren — become more pronounced. Like Ann and Abby, Schine's twins are sticklers to a literal fault. They, too, feud publicly in their competing columns and suffer a lengthy estrangement. In a further nod to Ann and Abby, Schine names Daphne's daughter Prudence, after the Dear Prudence advice column formerly penned by Ann Landers' daughter, Margo Howard.

Daphne becomes "a language scold" dubbed the People's Pedant, while Laurel argues that informal English isn't wrong because language is a living, mutating organism. Their rift, nominally over divergent attitudes toward grammar and usage — defined by linguists as prescriptivism versus descriptivism — is really over carving separate identities. Schine conveys fond respect for both sisters, much as she empathized with both the grown-up children and the aging parents in her previous novel, They May Not Mean to, but They Do.

This tale of twins who "elbow each other out of the way in the giant womb of the world" is smart, buoyant and bookish — in the best sense of the word.

This isn't the first time Schine has nailed the push and pull of sister relationships: The Three Weissmanns of Westport (2010) was fueled in part by "sororal rage." But The Grammarians tackles tight kinship head-on and cleverly demonstrates how Laurel and Daphne embody the conflicting definitions of "twin" from Webster's cited in the novel's epigram: As a noun, it means a couple or a pair, while as a verb, it can mean to part, sever or sunder.

I should say that I may well be an ideal reader for this book. Or correct that: My sister and I, though not twins, may well be among its ideal readers, along with, perhaps, essayist Anne Fadiman, who has written memorably about restaurants in which she can't read the menu for the typos. But I'm sure there are a lot of us out there — irrepressible copy editors for whom the difference between "I only have six eggs" and "I have only six eggs" is the difference between poverty (nothing but six eggs!) and an omelet limited to six eggs. Among this book's many delights: Daphne's rant about the phrase "nearly ten women." Was that nine and a half women, she wonders, or nine and three-quarters?

While not as moving as Schine's last novel, The Grammarians is filled with delightful zingers. Each chapter is headed by a definition from Samuel Johnson's A Dictionary of the English Language. "Bookish," we learn from one of his entries, "is generally used contemptuously." This tale of twins who "elbow each other out of the way in the giant womb of the world" is smart, buoyant and bookish — in the best sense of the word.