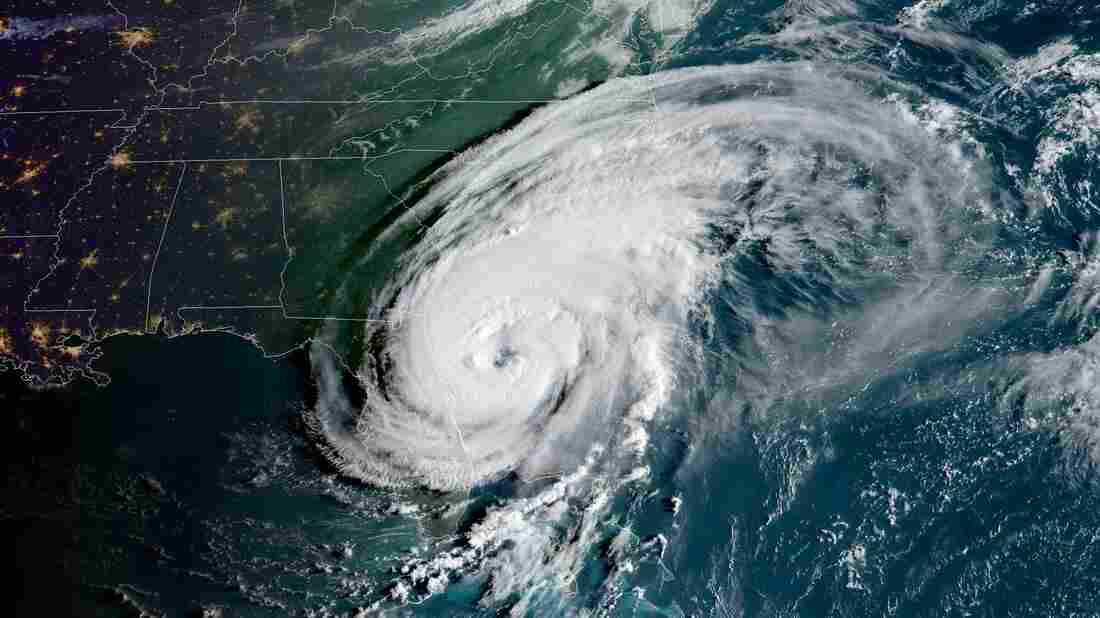 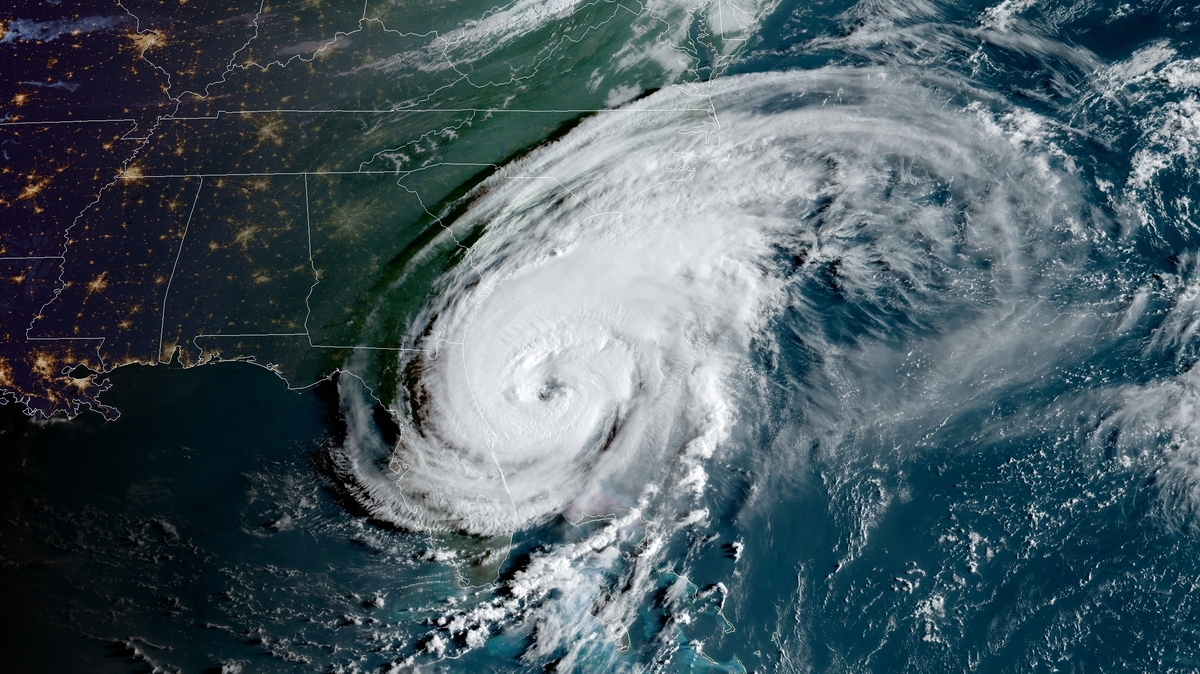 Hurricane Dorian's outer bands are lashing Florida as the storm moves northward along the U.S. coastline.

Hurricane Dorian is strengthening again and is now a Category 3 storm with maximum sustained winds of 115 mph, although "some fluctuations in intensity are expected during the next 12 hours," according to the National Hurricane Center.

At least 20 people have died in the Bahamas as a result of Dorian, local officials say.

U.S. weather officials at the NHC warn that Dorian could bring "life threatening storm surge with significant coastal flooding ... along a large portion of the Southeast and Mid-Atlantic coasts of the United States during the next couple of days."

Hurricane Dorian is moving to the north-northwest, roughly paralleling Florida's northern Atlantic coast, according to the National Hurricane Center. After making a direct hit on the northwest Bahamas, the storm did not make landfall in Florida.

The eye of Hurricane Dorian is roughly 105 miles south of Charleston, S.C., moving at 7 mph, the NHC said in its 11 p.m. ET update. The storm is predicted to turn toward the north-northeast — and around the same time, it's expected to close some of its distance to shore. "The forecast motion should bring the core of Dorian near the coast of South Carolina during the next 6 to 12 hours and over the Outer Banks of North Carolina between 24 and 36 hours," the NHC says.

The NHC says "all interests from northeast Florida to the Carolinas should remain vigilant.

The storm is now bringing heavy rain and gusty winds to the U.S. southeast coast.

A storm surge warning is in effect for a huge area of the coastline, from north of Port Canaveral, Fla., through Georgia and South Carolina up to through the Neuse and Pamlico rivers in North Carolina. The NHC says that in addition to the storm surge, areas along the coastal Carolinas could see an estimated 15 inches of rainfall.

During an afternoon storm briefing at the White House, President Trump said sections of the Bahamas were hit "like few people have seen before."

Trump said the Bahamian government has requested assistance and that the U.S. is helping in a "humanitarian way" including sending helicopters and personnel to impacted areas. The president said the U.S. is "lucky" so far to not be directly in the storm's path.

"We certainly got lucky in Florida, now if we can get lucky in Georgia, if you look at South Carolina, North Carolina, but it could even extend beyond that. We're talking about Virginia, hard to believe," the president said. 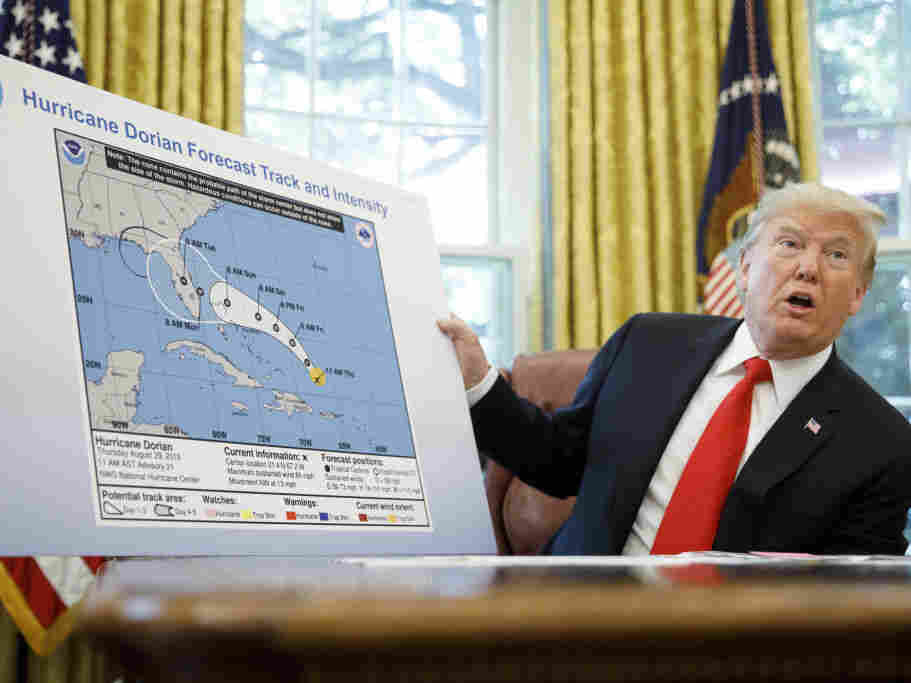 President Trump speaks from the Oval Office about Hurricane Dorian. He said the U.S. has been "lucky" so far to not be in the storm's path. Bloomberg/Bloomberg via Getty Images hide caption 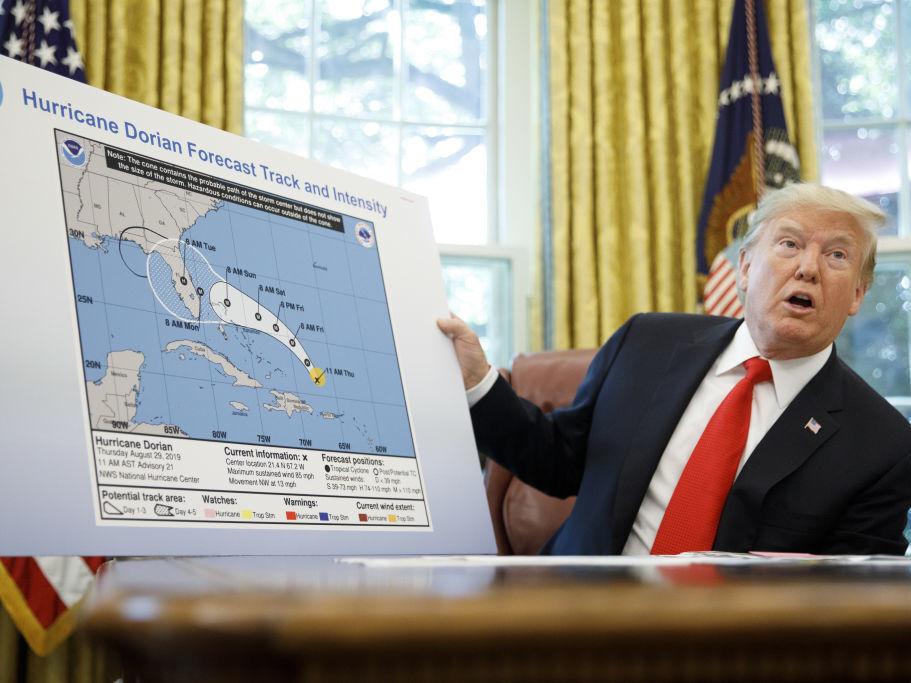 President Trump speaks from the Oval Office about Hurricane Dorian. He said the U.S. has been "lucky" so far to not be in the storm's path.

He called Dorian "very erratic" and said the storm has built up "tremendous water and water supply."

During the same briefing, acting Secretary of Homeland Security Kevin McAleenan underscored the dangers Dorian presents, particularly that the coasts of North and South Carolina could be hit by a "triple treat."

"It's that triple threat of hurricane force winds, certainly tropical-storm force, as well as storm surge of 4 to 7 feet and then a significant rain event up to 10 inches or more in parts of the Carolinas," McAleenan said. 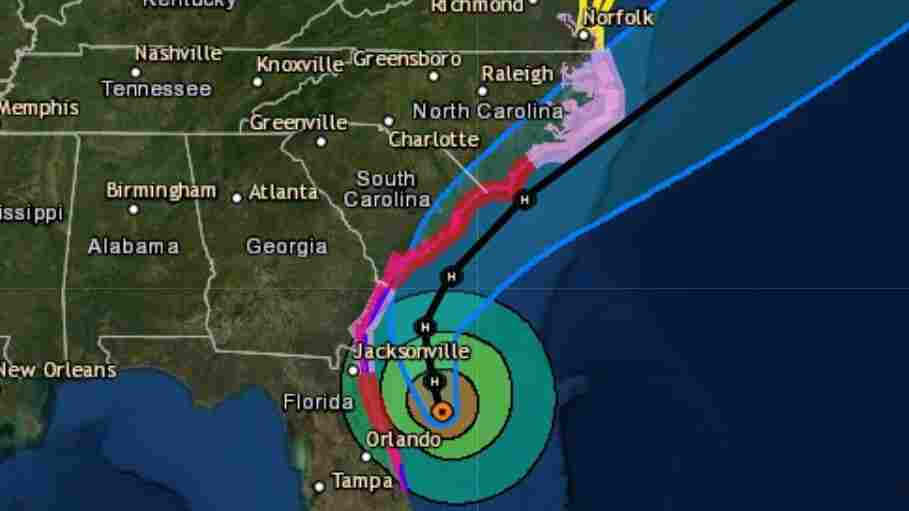 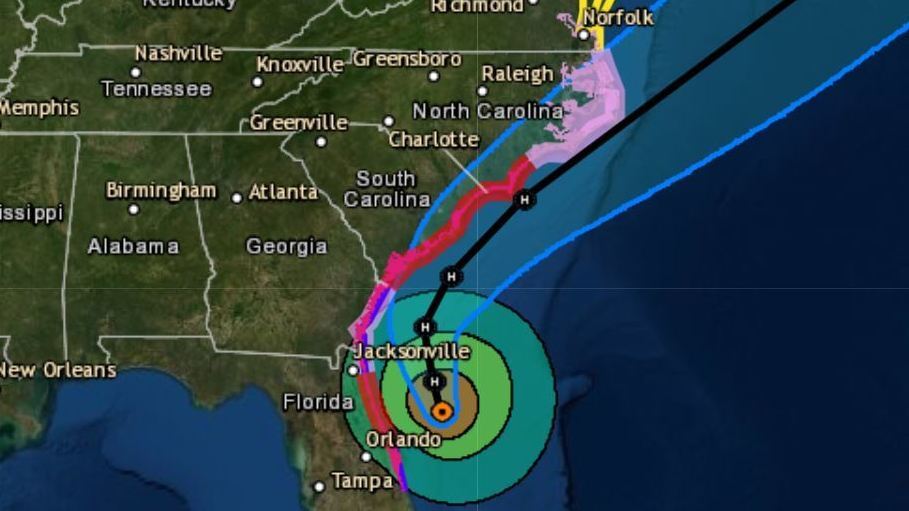 Hurricane Dorian "will move dangerously close to the Florida east coast and the Georgia coast" through Wednesday night before moving even closer to the South Carolina and North Carolina coasts Thursday, the National Hurricane Center says.

McAleenan said federal officials are coordinating with state and local officials ahead of the storm to pre-position assets for a quicker response once the storm passes.

Dangerous winds are also threatening a large area: Dorian is now sending hurricane-force winds outward up to 60 miles from its center; tropical storm-force winds extend for up to 195 miles.

In a late-morning briefing Wednesday, National Hurricane Center Director Ken Graham warned residents that roughly 90% of deaths in these storms are caused by water.

"The wind speed in the center, well that's one thing, but it's about the size, its about the storm surge and its about all that rainfall," Graham said. "Water is the leading cause of fatalities in these tropical systems, so listen to those local officials."

A stunning path of destruction

In the Bahamas, the response to the terrible damage included rescue efforts from the U.S. Coast Guard and the British Royal Navy. The push to get relief supplies to the area is also drawing on aid groups. As of Wednesday morning, the international airport in Freeport was still flooded.

"People are getting desperate, because their roofs are ripped off and their food supplies got damaged or thrown all over the place" in the chain's Abaco islands, NPR's Jason Beaubien reports from Nassau.

José Andrés, the renowned chef and philanthropist, rode out Dorian at the Atlantis resort in the Bahamas in anticipation of feeding residents affected by the storm.

"If there's no kitchen initially we will try to ... bring in the food daily, well, through a boat or a helicopter," Andrés told NPR's Steve Inskeep on Wednesday's Morning Edition.

He added that he had gotten an assist in food preparation from guests at the resort, where Andrés has a restaurant.

"They began coming, entire families, coming to help us make sandwiches," Andrés says. "When you see things like this it's really unbelievable."

The Bahamian government was finally able to discontinue tropical storm warnings early Wednesday — three days after Dorian hit the island chain as a Category 5 storm and nearly a week after the Bahamas issued its first hurricane alert last Thursday morning.

"All clear!" the emergency agency announced on Wednesday. But it also warned that residents should still be on their guard against a number of possible threats, from downed power lines and trees to severe flooding and the potential for tornadoes.

As discussed yesterday, #Dorian's west side has now become nastier. This will continue to be the case as the storm comes up the coast. This is the land-facing side, so the eye doesn't need to come ashore in the Carolinas for the coast to feel the brunt.https://t.co/5FgKqsxadf pic.twitter.com/vhkD8Q5F8U

Dorian has defied numerous forecasts, including initial predictions that it would buzz across Florida's central east coast. Instead, its center has refused to make landfall on the U.S. And after booming into a Category 5 storm with gusts far above 200 mph over the weekend, Dorian has lost some strength — but forecasters warn it can still cause more damage.

While Florida may have been spared the worst of what Dorian threatened, there are some collateral impacts, such as the washing onshore of illicit drug shipments. So far, authorities say, they have found 26 packaged kilos of cocaine on Florida's shores.

Preparations along the coast

In Virginia, the U.S. Navy ordered its Hampton Roads-based aircraft and ships to leave the area ahead of the storm. Starting Wednesday ships will begin leaving Naval Station Norfolk and Joint Expeditionary Base Little Creek and remain at sea until the storm passes.

The Navy says some planes will be flown to alternative airfields, while others will be secured in hangars.

"This allows time for our assets to transit safely out of the path of the storm," Vice Adm. Andrew Lewis of the U.S. 2nd Fleet said in a statement.

Earlier this week, Virginia Gov. Ralph Northam declared a state of emergency ahead of Dorian's anticipated effects on the southeastern part of the state, which could begin to feel the storm's impact by Thursday.

On South Carolina's coast, people have been ordered to evacuate or take shelter ahead of Dorian's arrival. But as often happens in such cases, not everyone plans to leave. The mandatory evacuation order took effect at noon Tuesday. But late in the afternoon, Myrtle Beach was still fairly crowded, South Carolina Public Radio's Scott Morgan reports.

In neighboring Georgia, Gov. Brian Kemp has ordered a state of emergency that includes 21 coastal counties. At least six counties are under a mandatory evacuation order.

In Florida, people who appear to have avoided a direct hit by Dorian are now mounting supply drives to bring aid and relief materials to the Bahamas. A two-day supply drive in West Palm Beach is seeking first-aid kits, flashlights and other materials.

In Miami's large Bahamian community, churches and the local government are working to send relief supplies to help ease those trapped on Grand Bahama and Abaco.

"Having lived through similar storms myself in the Bahamas, it's really a harrowing, life-changing experience," the Rev. Jonathan Archer of Christ Episcopal Church told member station WLRN. "We're getting a lot of food, a lot of water, but we certainly need a lot more batteries, flashlights, tarp, rope."