Accessibility links
Book Review: 'Fashionopolis' Tells Us Why We Should Care About Clothes Fashion journalist Dana Thomas' book is a snappy, clear-minded attack on the fashion industry's rampant labor and environmental abuses — and also offers a path forward for consumers and the world. 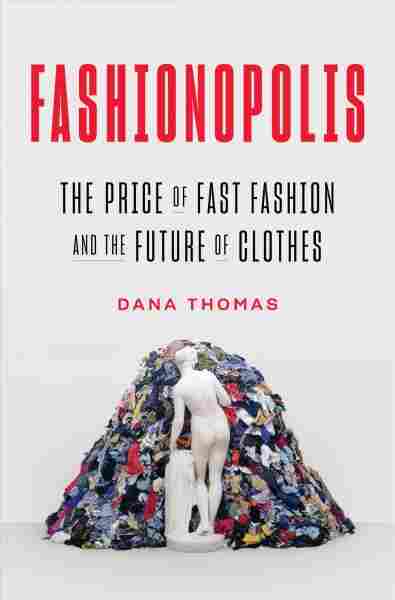 The Price of Fast Fashion - and the Future of Clothes

My grandfather, Bunny Meyer, ran a Chicago tannery called Gutmann Leather. When I was a child, it was a source of both terror and pride.

The tannery was full of frightening, evil-smelling machines and chemicals. It had also been in the family since 1885. Bunny took pride in providing high-quality leather and high-paying, stable employment. My father and his siblings were proud, too, but when he died in 2002, none of them wanted to run Gutmann. The tannery — like most in the United States — shut down.

Reading fashion journalist Dana Thomas' Fashionopolis: The Price of Fast Fashion and the Future of Clothes -- a snappy, clear-minded attack on the fashion industry's rampant labor and environmental abuses — brought back my mixed feelings about Gutmann Leather. Tanning is a dirty business, start to finish. But, often, so is exporting manufacturing. Would it be better for Gutmann to reopen and strive to model the best possible labor and environmental practices available in the leather industry, while pushing scientists to improve ecological options still further — or should there be no more leather production at all?

The answer, per Thomas, is both. Leather won't be eco-friendly till it's grown in labs. But until then, domestic, regulated production is a crucial challenge to fast fashion, which Thomas defines as "the production of trendy, inexpensive garments in vast amounts at lightning speed in subcontracted factories, to be touted in thousands of chain stores." Fast fashion is "a dirty, unscrupulous business that exploited humans and Earth alike." It has decimated labor in developed countries, human rights in developing countries, and environmental quality across the globe — and Thomas asks readers to resist it however we can.

Fashionopolis lays blame squarely at the industry's door. At no point does Thomas shame consumers. But she does ask us to change our ways. As a nation, she writes, Americans sent 14 million tons of clothing to landfills in 2018, while shopping at a feverish pace. This "fashion bulimia" is enabled by fast fashion companies. In turn, it encourages their social and environmental malpractice.

Fashion bulimia's clearest victims are the sweatshop laborers who make the clothes we wear and throw away. In Fashionopolis's most wrenching chapter, Thomas visits sweatshops in Los Angeles and Bangladesh, interviewing workers, advocates, and survivors of sweatshop disasters. Of the 2010 That's It Sportswear garment factory fire near Dhaka, she writes, "The scene was familiar: locked exits; workers defenestrating themselves." That sentence should be unthinkable, and yet anyone who has consistently read the news over the past few years will, in fact, recognize the scene. Thomas quotes the Los Angeles garment-worker organizer Mariela Martinez on that widespread recognition: "'Listen, we all know our s--t's made in sweatshops,' she said. 'But we put it in the back of our minds. Nobody cares.'"

We also put the fashion industry's ecological practices in the back of our minds. Per Thomas, the World Bank estimates that fashion "is responsible for nearly 20 percent of all industrial pollution annually [and] releases 10 percent of the carbon emissions in our air." Consumers frequently turn a blind eye to this damage, as we do to sweatshop labor. Fashionopolis strives to make us pay attention.

Thomas does this primarily by advocating for "slow fashion," which she defines as "a growing movement of makers, designers, merchants, and manufacturers worldwide who, in response to fast fashion and globalization, have significantly dialed back their pace and financial ambition," choosing to "[honor] craftsmanship and [respect] tradition while embracing modern technology to make production cleaner and more efficient." Rightshoring, bringing operations back home, is part of this. So are fair labor practices and clean production of everything from cotton thread to stonewashed jeans. So is buying slow-fashion clothing, which, Thomas argues, places the consumer within that sphere of honor and respect. More importantly, it demonstrates to the fast-fashion industry that there is financial incentive to change.

Fashionopolis is most flawed when it comes to those consumers that cannot afford slow fashion. The only options Thomas offers are luxury rental, consignment, and resale, which for many remains prohibitively expensive. The only options for now, at least. In a chapter on "cradle-to-cradle" fashion, she describes new scientific methods for reusing fabrics, visiting companies such as Italy's ECONYL and the UK's Worn Again that recycle one type of textile into another. ECONYL turns nylon into fabrics used in "clothing linings, dancewear, and carpets. Speedo swimsuits. Breitling watches. Adidas socks."

Until ECONYL, Worn Again, and their peers dominate the textile market, Fashionopolis is clear on consumers' responsibilities: Buy less clothing, and buy as responsibly as possible. Seek sweatshop-free labor. Fix clothes that start wearing out. And when a garment's life ends, find it a new purpose rather than sending it to the landfill — and consider not replacing it right away. None of these changes are massive but, according to Fashionopolis, together they'll go a long way.